Evacuation is a game of strategy, quick wits, and explosive decompression! Aliens have invaded your cargo hold, and the only way to get rid of them is to vent them into space! But try not to airlock too many of the crew - they aren't insured! Tap the doors to open and close them, or tap the floors to place a flag for your crew to rally around. If you accidentally evacuate the captain, it's game over - he's also the pilot. If you lose all your crew, it's game over too - when you have no crew, no one can hear you scream... 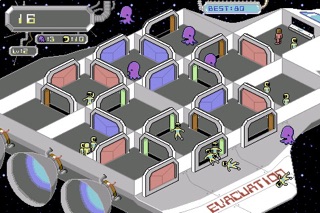 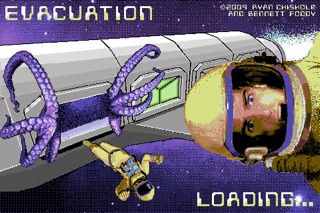 Update required to play.
By Bre554

This app cracks me up XD it is so fun and addicting!! However, it would be great if we could tap on colored tiles instead of the actual doors, just because of the space constraints of the iPod/iPhone :)
By Nikadile

Fun and a great game but it freezes sometimes and hasn't been updated in two years.
By LesPersones135764

Cool concept that's wrecked by the least precise touch controls I've ever used. Wouldn't be an issue if the gameplay didn't ask you to be precise, but that's pretty much all it asks you to do.
By Mcaster2011

Would love to see it grow. ~rl
By ~rl

The game is really good but the precision of the controls needs a lot of work, especially for the levels where you need to click fast
By Drethelin

Like many others I came to this game through its Flash version. The concept is spot on but the touch controls are still a bit iffy. In addition this game should have some basic menu options including keeping track of your score. All-in-all this app has potential but these issues do have me wishing I had saved my money and stuck with the free Flash version.
By Binarynova

I saw a review for this game in Play Magazine and figured I should check it out. The game is well designed and a lot of fun. This is a really great action/puzzle title. The random levels keep you coming back (I don't think I would have liked the game as much if I had to do the same stages over and over.) This is a great game for small breaks but not recommended for hour long playing stints. The gameplay is sold and I have only had one or two times where I got a door opened instead of placing a flag which were probably from user error/big fingers than anything else. There are a few problems that keep it from 5 stars. While the gameplay is just about perfect but the game does not save upon exiting. This means you have to kill off your crew before you quit if you want to save your score. The game also only saves your highest score. A few more statistics would help (top 5 scores, total people killed, total aliens killed, total doors opened, etc) There is also a glitch; if you touch outside the top of the ship it usually causes the game to crash (I have been able to repeat this crash many times on my ipod.) This does NOT affect gameplay since you never have to touch this area of the screen and I have had no problems with the game crashing other than this. This is a great title and well worth checking out. You will certainly get your dollars worth.
By John of Fire

Excellent pick up and play game, I haven't noticed any of the touch detection issues that seemed to plague the original version. The only major addition I would want is a save upon exit feature. I hope this game gains some recognition, with some minor updates/polish (difficulty modes limiting complexity of puzzles?) it could really stand out.
By LucidSurreality

Like others have said it is a great web game and I think it translates to the iPhone great. The only issue is that I can't do the same open and close timing to get rid of aliens without losing people. They really need to fix the responsiveness of the touch controls for it to be a good game.
By Chrizbo