Any Drug Question. Anytime. Anywhere Lexicomp drug reference on mobile apps are unique in the industry for being as extensive as our online drug reference offerings. No content is abridged. Users can view more than 20 databases, featuring timely, in-depth information on drugs, natural products, interactions, medical calculations and more, whether in the hospital or on-the-go. Provides unique features other drug information apps don’t have, like a pharmacogenomics database, IV compatibility data, drug shortage information, patient education leaflets, and the ability to reorder databases and monograph fields to customize display. Content is stored directly on the device – clinicians can quickly answer questions even if there is a weak mobile signal or no internet connection. Used and trusted by pharmacists, physicians, nurses, advanced practice nurses, dentists, and students. New individual users will receive a one month free trial to Lexicomp Hospital Pharmacist Package. At the end of the free trial, users will automatically be billed $29.99 per month via their iTunes Account for continuing access. To avoid being charged, users must cancel their free trial at least 24 hours before the end of the trial period. Users can manage settings, cancel subscriptions, or turn off auto-renewal anytime during the subscription period via iTunes Account Settings. Any unused portion of a free trial period, if offered, will be forfeited when the user purchases a subscription to that publication, where applicable. Terms of Use: http://www.wolterskluwercdi.com/disclaimer/apps/ Privacy Policy: http://www.wolterskluwercdi.com/app-privacy/ 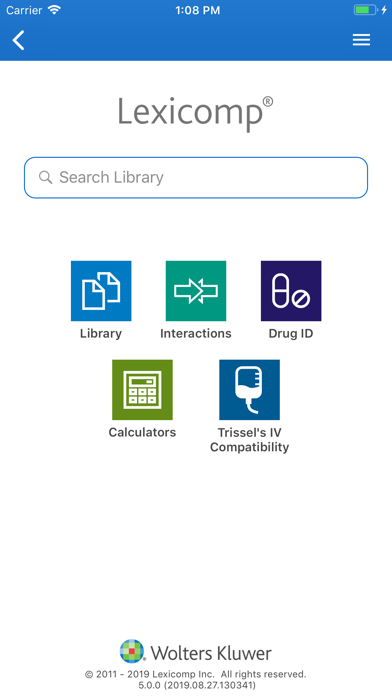 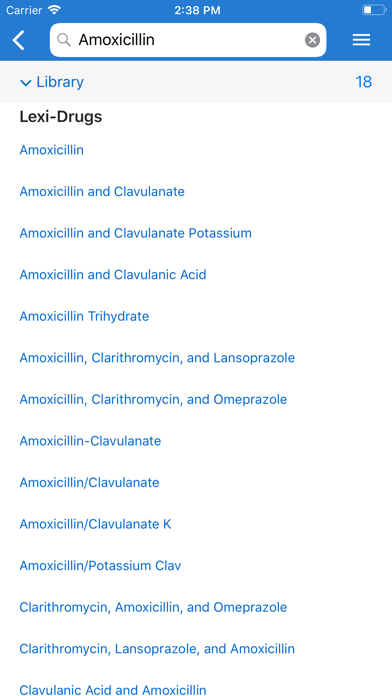 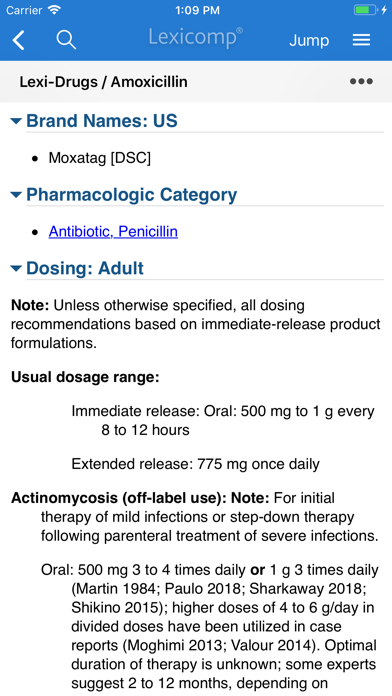 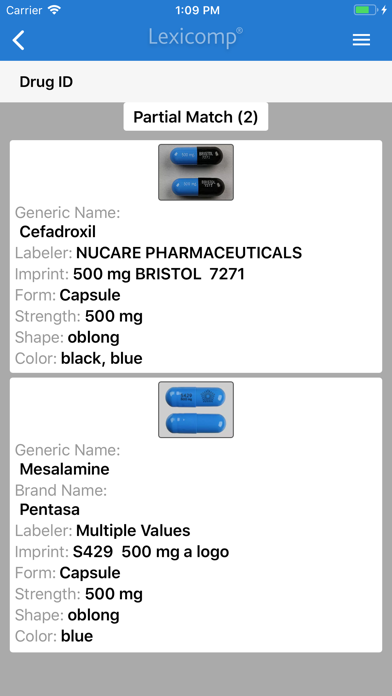 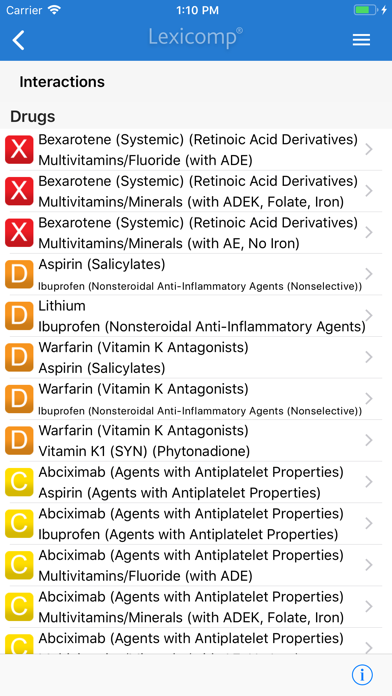 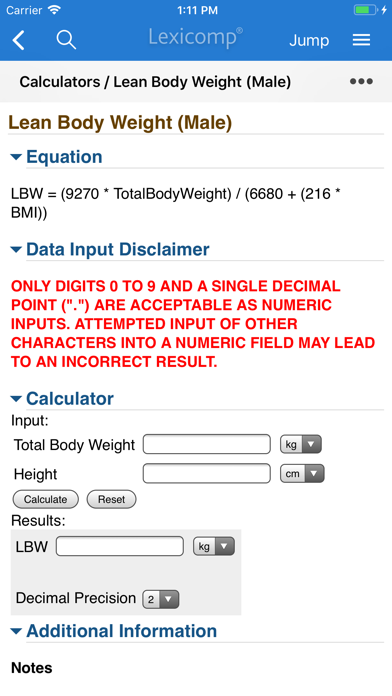 I tried the one free month.. and cancelled within the month. Lexicomp submitted a request for payment that was then declined 3 three more times the following month.. On the third attempt it was kicked in the AutoPay and they were paid 32.54 every month for 6 months before I spotted it. Apple got two months refunded. The remaining 4 payments were not able to be recouped. The cancellation at Lexicomp is not dependable. I am sure they have made a lot of money in this way scamming people who tried their software.
By tzjcomet1

Overall, great app and I am happy with the reliable and trustworthy content. I have been using this app for approximately 11 years as a hospital pharmacist. However, I do have a few suggestions for improvement. The app is by no means broken, but I do think these changes would be beneficial to most pharmacists. 1) When searching for a drug name, show the results of the 1st letter of the the search first. Example - typing in “Tob” pulls up pentobarbital first, and tobramycin is listed further down in the results. Generally people know the 1st letter of the drug they are searching for. 2) Allow manual database updates to run in the background. I think more people would keep up on their updates if this was possible, instead of having to leave the app open on the update screen. 3) Allow us to adjust the monograph order like we used to be able to. I’d say 95% of the time, I am looking up renal dosing info, it would be helpful if I could stack this at the top instead of having to click thru the jump menu. 4) Favorites - allow us to save a drug and section instead of just a drug. For example - “cefepime, renal dosing” instead of just cefepime. Thanks for your consideration - and yes, my app is up to date.
By mlarson123

I have been a monthly (not a cheap subscription) for at least 3 years. Was great. 5 stars. Then, last month, no explanation and no discount or rebate, they took away at least 75% of content. Yes, mid-subscription they did update and just ripped me off without explanation. Not acceptable. Both 5 minute clinical consults vanished. Again, no apology, no explanation, just clicked on update, new terrible format, and content just taken away. Again, I paid for a product, got 75% of it taken away first week of monthly subscription with no explanation and sure as heck didn’t refund 75% of the subscription fee. Not cool.
By Minnyhe

Feels like they stopped paying attention to the app

This used to be quite an amazing app. One of my favorite features was the ability to customize it via the “mono” arrangement of drug sections. However, the ability to edit/arrange this has been lost for over a year now and they keep saying “we’re working on it”! A shame-because it feels like such an easy fix to restore a function that was there before. Otherwise, information is good and very useful. Just not as easily available as it could(or used to) be.
By WLDoc

I have an institutional subscription that has to be rE registered annually, did the usual, and the (expletive expletive expletive) app would not stop saying my subscription was expiring until I clicked ‘confirm your subscription in the App store’. I saw something that said ‘$0.0’ and signed OK. Then I see a receipt from Apple for a paid subscription. Lexicomp app engineers who created this ‘bug’, app program managers who approved it, may the fleas of a thousand camels infest your armpits.
By NitNicked in LA

I hope you aren’t relying on this for a job or to take care of patients cause it doesn’t always work when you need it. I needed to ID some drugs on the fly. Opened app. It won’t let me use drug ID without a sync. I sync 108 mb over 5 mins. Sync fails. Still unable to use. Unacceptable. How about a way to get to the “filter drugs” index from the main screen? So I don’t have to click through Library > Lexi Drugs > Drugs to get to the “filter drugs” index which is the only index I need to quickly get to. Sorry, searching from the home screen brings up too much junk and it is still several clicks to get to a drug monograph.
By Sf2 fan

I am a third year medical student who just started clinical rotations. We were told by our school that Lexicomp was covered through our UpToDate subscription, yet my personal account has still been charged $29.99.
By chakrhaixbsjd

I apparently unwittingly ordered this, and with automatic renewal I don't know how long I paid for this, but I NEVER USED LEXICOMP. Enough said.
By dranderson12

I would recommend lexicomp to develop the app that allows users to update the content in the background without having interruptions to searching the drugs. Also, it would be nice to have the update on the content still happening in the background when users switch the screen to use a different app.
By KPRX123

App is absolute trash. The subscription/log-in process is convoluted. Passwords don’t function properly, and the reset only resets the password for the web store but not mobile access. I wish my institution didn’t use this service.
By Mailkimp