Stitcher plays your favorite podcasts and radio, whether you're having an adventure on your commute or laughing out loud at home. Explore shows from NPR, WNYC, the New York Times, Earwolf, BBC and more. Stream or download podcasts and listen to internet radio with our free app. Find shows on news, comics, true crime, and more for the curious listener, including classics like This American Life, The Daily, Fresh Air, and Joe Rogan. Stitcher also has exclusive back catalog episodes of Freakonomics, WTF with Marc Maron, True Crime Garage, Comedy Bang! Bang! and many more Earwolf shows plus ad-free, original content on Stitcher Premium, including the Marvel comics based, Wolverine: The Long Night. P.S. If you liked Howl, you’ll love Stitcher. KEY FEATURES Listen on Demand Or download podcasts for later Personalized Front Page Use Stitcher as your news app and podcast hub to receive updates in real-time based your favorites and recommendations based on your listening Custom Playlists Create personal radio station type playlists of your favorite podcasts for long drives, commuting, or other hands-full activities Exclusive Premium Podcasts and Back Catalogs Subscribe to Stitcher Premium for exclusive content from shows you love and original Stitcher productions Smart Speaker Integrations Now features an Amazon Alexa skill and connects to Sonos speaker systems. Supports CarPlay and integrations with over 50 other car models from Ford, GM, Mazda, BMW, Jaguar, Landrover and many more GETTING STARTED Download the free Stitcher app Sign in with Google, Facebook or your email Select your favorite genres, networks, or podcasts in our tutorial Start listening by tapping the play button anywhere on your Front Page OR Tap the magnifying glass in the upper right corner to search for podcasts Click on a show, then use the plus button to add to your Favorites and listen later Stitcher offers podcasts you won’t find using other internet radio apps. Our podcasts cover a wide array of topics from news to comics, crime, politics and more. AWARDS & PRAISE - 20 Best Apps - TechCrunch - Essential Driving App - Wired.com - 12 Best Entertainment Apps - PC World 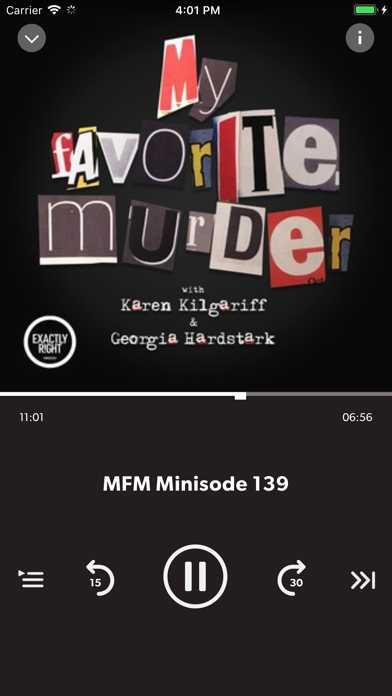 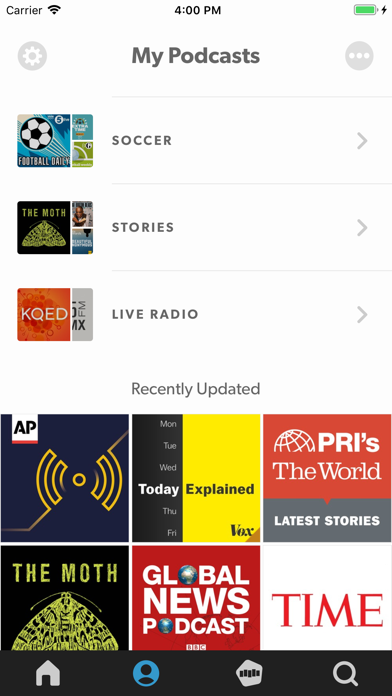 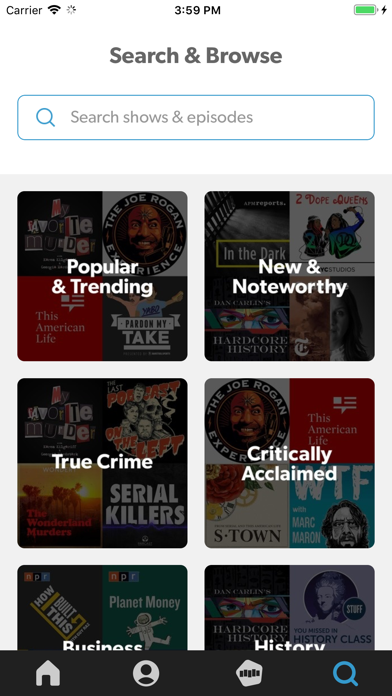 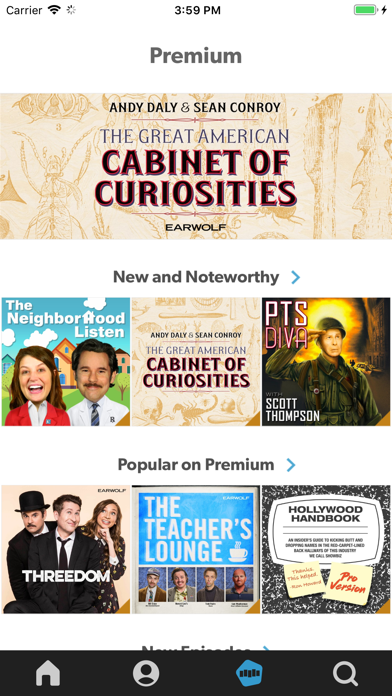 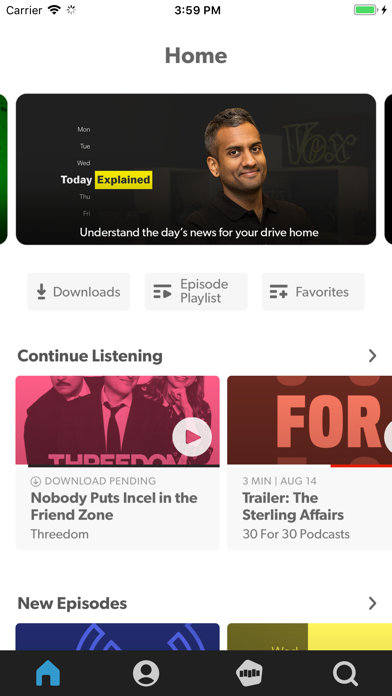 Man, I loved this app. Used it exclusively. Now I’m constantly restarting, the app has trouble with downloads often, even with perfect internet. Many shows are uploaded days after they’re available on other platforms. And some shows get skipped when the should be uploaded, case in point JRE 1551. Where is it?
By Day245

Not the best app for podcasts.

I don’t prefer to use Stitcher. Unfortunately, I’ve gotten hooked on a few podcasts that back episodes are ONLY available on Stitcher. So I’ve resigned myself to using it. It stops podcasts all the time. Then the episodes start about 10 min behind where they were. It’s so frustrating. I prefer to use Overcast, it is far superior. Don’t get hooked on True Crime Garage, because they have a huge back catalog only available here lol. I’ve also gone stitcher premium for ad free versions of Office Ladies, MFM, etc and just....ugh. I use this app because I must.
By Lizrude

Stitcher fails to download some of my subscribed podcast episodes every day. I’ve had to get my podcasts on other apps instead. Sometimes when I listen to a podcast on Stitcher, the slider that shows how much time is left and lets me quickly fast forward or rewind just disappears. This is a frustrating problem. When Stitcher was reliable, it was one of my favorite apps and I gave it 5 stars. Unfortunately, it doesn’t deserve that rating today. Previous review: Stitcher is one of my most used apps. I use it every day to listen to my favorite podcasts. It is the best podcast app I have seen.
By RetroUltraModern

Should have been warned by the fact that I couldn’t sign up for a premium prescription on their website (error messages), and had to use the App Store. Next, search is broken, repeatedly returning no results for searching even the exact name of podcasts, telling me to “tap to try again” even after uninstalling and reinstalling. Go to the website and I can’t login to my account there, and there seems to be no way to contact support, just irrelevant faq answers. Disappointing because several podcasts I like have an ad free version, but I’m definitely canceling my subscription.
By LizTLynch

Options for Facebook and Google for sign in, but does not include Apple. Support services that aren’t data vacuums. You shouldn’t need my email for this.
By RyanLaughsAtYou

Great idea Piss poor execution at least on iPhones If it would load or down load content in any way that resembles reliable I will change this If not the sooner you all go bankrupt the better.
By SharonPie

No updates on any of my iOS devices.
By jayjay8382

Only writing this here because app support wasn't working

So I've used stitcher for 4 or more years, love supporting a smaller company on top of the app being functional. But there's this bug that's in Android and IOS that is just irking me too much. Some reason, totally random, if I queue something the app will stop playing my queue after one episode. Doesn't happen every time, but does happen consistently and is super annoying during a morning run. Wish you best, hope you keep the app alive
By punctuationmarks

I love Stitcher. It’s simple and I find it quite intuitive. I think you just have to work with its features. Every podcast app has a few great features and some frustrating ones. Keep coming back to Stitcher. Surprised by reviews favoring some competitor apps.
By KHASL

Well, I’m giving up on Stitcher. Again. - I first heard about Stitcher about three or four years ago. It was an exciting idea- ad free and exclusive podcasts, plus extra content from my favorites. At the time I found the app something I can only describe as unusable. The interface was exciting with lots of pictures, graphics, and videos! As a result, it was unintuitive and confusing. When streaming, the podcasts frequently cut out. I gave up quickly. - But as once again my frustrations with Apple podcast mounted, I thought I would give Stitcher a second chance, and the app is fantastic. The UI has been streamlined – it’s still pretty, but it works really well. Streaming podcast is problem free (so far). And as much as I love the changes, I'm going back to Apple. - Why? Well, they've just made some really weird, inexplicable decisions, that simply don't work for me. - The app just isn't as ad free as you want it to be. Yes, there a few ad free shows, but most will still have ads inserted by the creators. This isn't terrible, but when you pitch your PAID service as ad free, well, it should be. Also, quick FYI, do not use the free version of Stitcher. The name of the company was actually inspired by their habit of stitching in extra ads into a podcast- it's atrocious. - The app doesn't keep track of where you're at in a show. So, if you're at episode 50 out of 300, be prepared to do some scrolling every time you want to listen to that show. - And the big one: When adding an episode to a playlist, it adds it to the top of the list. Each time you add an episode, it pushes the previously selected episode down (back in play order). This is your only option. This has got to be the defacto dumbest design decision I have ever seen. It means if you want to build a playlist, you have to build it in the REVERSE ORDER of how you'd like to listen to it. Adding episodes to the 'Episode Playlist' places them on top of the one that's currently playing, which means they wont get played. An interesting addition to this particular issue: when you finish the bottom episode in the "Episode Playlist," it deletes everything else in the list. Discovering these two quirks at the same time was especially infuriating. - So unfotunately, Stitcher still needs a lot of work. For those who just want to listen to a lot of podcasts along a certain genre, there are some great discovery tools to be found here. But for those who listen to their regular 20 podcasts, their service is still a waste of money.
By ashenol