By The New York Times Company

Top stories See the events shaping the world. Morning and Evening Briefings Begin and end your day informed. Podcasts Listen to audio series including “The Daily.” For You Follow the topics that interest you most. Opinion Read political, social and personal commentary. Push notifications Get alerts on the topics you choose. Mini Crossword Enjoy wordplay, every day. Understand the world through award-winning independent journalism, expert reporting and multimedia storytelling with the New York Times app. iPhone and iPad Features: • News Alerts: Get notified of major developing stories and tailor alerts to topics of interest. • Morning and Evening Briefings: Start and end your day with daily digests compiled by Times journalists. • For You: Explore more of what you love, and discover new topics of interest. • Podcasts: Listen to audio series including “The Daily” and “Modern Love.” • The Mini Crossword: Enjoy wordplay every day with the daily Mini Crossword. • Today’s Paper: Find all the stories exactly as they are in the print edition. • Experience NYT stories through innovative formats, like augmented reality. • Save articles to read later on any of your devices. • Multitasking: On an iPad? Get caught up on the day’s headlines while working in other apps. Apple Watch Features: • Catch up quickly by reading today’s headlines. • Receive alerts when big news breaks. The New York Times app is free to download, and all users can access a sampling of articles per month, from any section. Subscribers get full access to over 25 sections, plus unlimited access to nytimes.com. Digital Subscription Options: • Basic - unlimited digital access for $14.99 per month or $129.99 per year (save over 25%). Cancel anytime. • All Access - unlimited digital access, plus access to the NYT Crossword, NYT Cooking, and one bonus digital subscription for $24.99 per month. Cancel anytime. Your payment will be charged to your iTunes account at confirmation of purchase. Your subscription will automatically renew each month or year 24-hours before the end of the current period, and your credit card will be charged through your iTunes account unless auto-renew is turned off at least 24-hours before the end of the current period. You can turn off auto-renew at any time from your iTunes account settings. Any unused portion of a free trial period, if offered, will be forfeited when you purchase a subscription to that publication, where applicable. Privacy Policy: https://www.nytimes.com/content/help/rights/privacy/policy/privacy-policy.html Terms of Service: https://www.nytimes.com/content/help/rights/terms/terms-of-service.html California Notices: http://www.nytimes.com/privacy/california-notice Starting version 9.32, this app will save and honor your privacy preferences across devices when logged in to a New York Times account. Questions Concerns? Please contact us at ios@nytimes.com or (800) 591-9233. We respond to every inquiry. * Promotional offers for new subscribers only. Not valid for Digital Access $129.99 per year subscription option. Smartphone and tablet apps are not supported on all devices. NYTimes.com + Smartphone Apps, NYTimes.com + Tablet Apps and Digital Access subscriptions do not include e-reader editions. Prices shown are in U.S. dollars. Other restrictions apply. 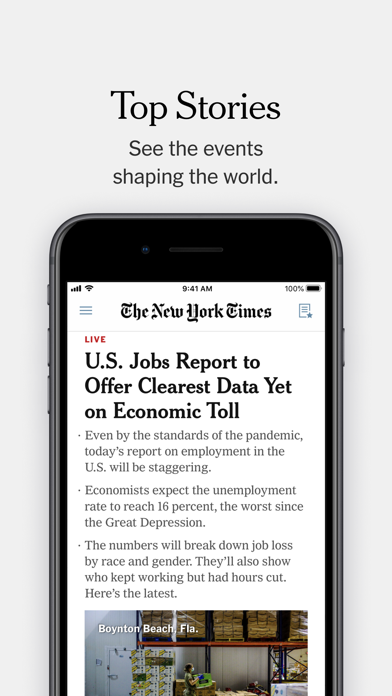 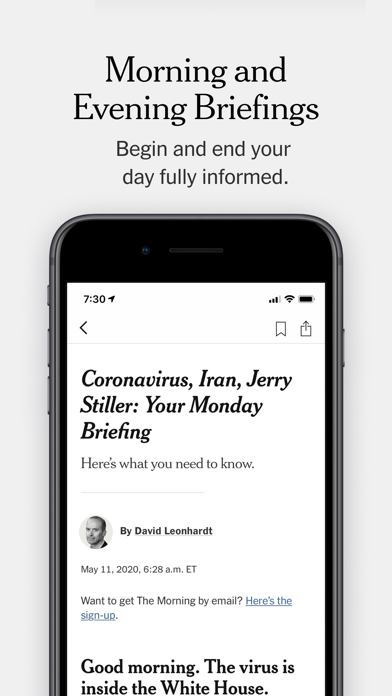 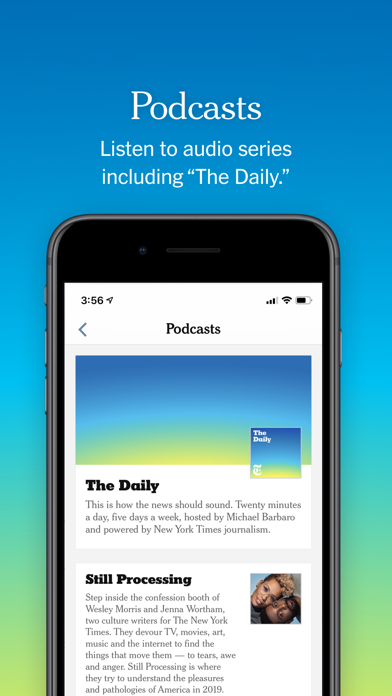 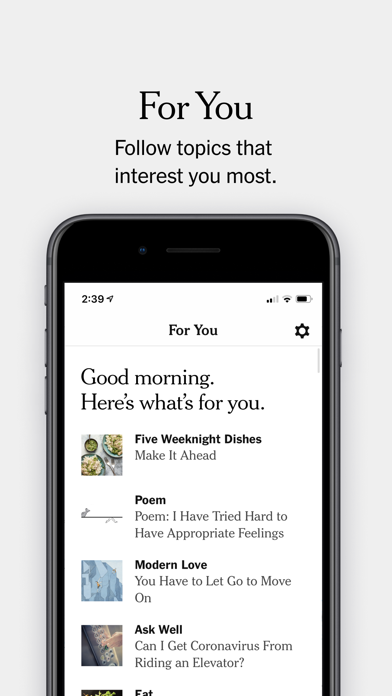 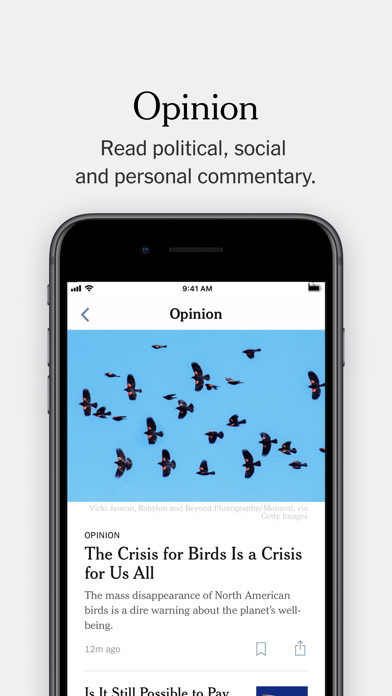 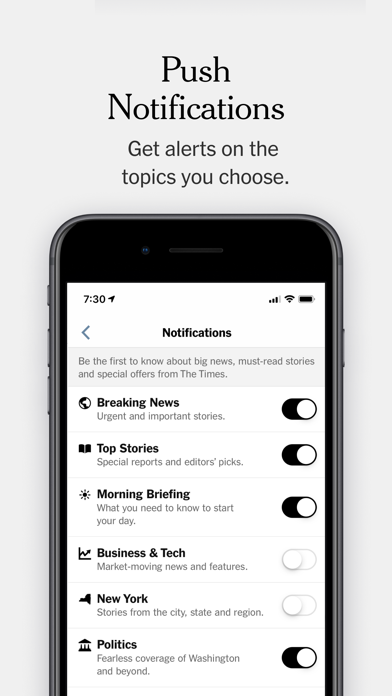 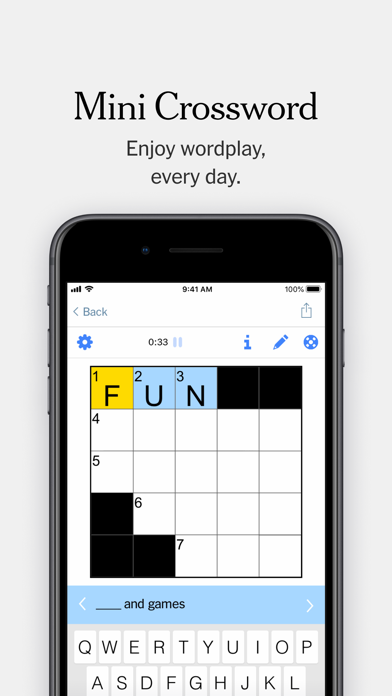 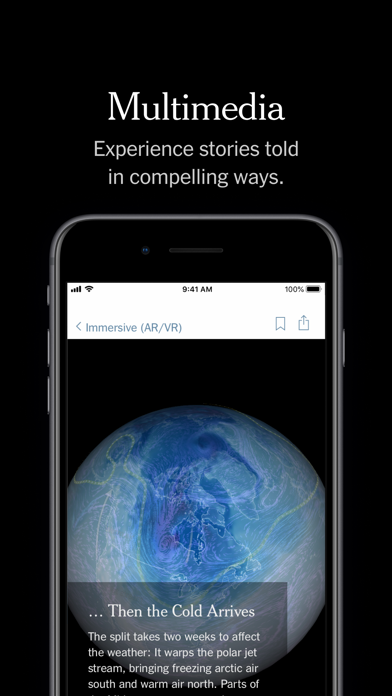 Within the last few months the NYT iPad app’s performance has been abysmal. On loading it takes more than 30 to 40 seconds to do story layouts. Same delay on refresh. I also use the iPad WSJ app and iPad Washington Post app and I find their performance continuous to be smooth and much better than the iPad NYT app. Don’t get me wrong — I love the NYT stories; however, reading them on the iPad NYT app is as frustrating as reading an old fashioned newspaper in a wind tunnel.
By snarky reader

Often when I was trying to view the NYT in my browser I would get a message prompting me to open it in the app. Whether I chose open or cancel it would open the page in the app. So I have deleted the app. Other than that the app was fine, I’d use it if not for this problem.
By emUnwired

For years the NYTimes app has been my daily (even multiple times a day) go-to for news. In the past year, however, it has been getting slower and slower such that now I prefer to go elsewhere. Cut the bloated video and ads. Or give us an option to do so.
By JoseMars

More often than not I get an error saying to try again later. I prefer to read using the today’s paper section but it’s almost pointless subscribing at this point. On a 2020 iPad, but have the same issue on another iPad with everything up to date.
By Jdh5153

If it’s not one thing it’s another. I hereby give up on the app and plan to read the NYT exclusively in Safari on mobile. The needless design and layout changes are forever going to be hindrances. An example is that Today’s Paper (today is April 11 2021) shows stories exclusively from March. I’d be embarrassed be part of the group that made that happen, presumably through negligence. You want paying subscribers, not paying peeved ones.
By lennon2020

Updates should mean progress. Your latest update is everything but. Why did you disappear the left side sections list that was easy to navigate and easy to read in favor of endless sliders? Who in the UX department figured this was "better" or "clearer"? Of course I won't cancel my subscription, but you knew that already. I guess that's why anything can be tried at thebTimes. We are somewhat of a captive audience. It is too bad. Perhaps an explanation of why you made the changes would help. Because, this one gets a D.
By Applykations

The reporting is top notch but the app just gets worse and worse. It is painfully slow to load, it stalls, and sometimes it simply freezes. This would be unacceptable for any app For the country’s newspaper of record it’s scandalous.
By Thaxted

This app has gotten steadily worse

It seems like an experiment to see how much bad programming the readers can tolerate! Let me spell it out for you. Your subscribers like to read... we don’t need wonky immersive video... or any other gimmicks. Just have the app load the articles and make it easier to navigate, it’s not that hard. In fact you used to be pretty good at it.
By drmadz2

Ads get in way; app is hard to use

The ads always load reliably. The articles load a lot less reliably. The WSJ app got it right. If you want me to keep paying for a subscription make the experience better than using an ad blocker on your website.
By Whateveropolis