Evernote helps you focus on what matters most and have access to your information when you need it. Input typed notes or scan handwritten notes. Add to-do’s, photos, images, web pages, or audio ... and it’s all instantly searchable. Organize notes any way you want and share with anyone. And Evernote syncs across your devices so your information is always with you, everywhere you go. --- “Use Evernote as the place you put everything… Don’t ask yourself which device it’s on—it’s in Evernote” – The New York Times “When it comes to taking all manner of notes and getting work done, Evernote is an indispensable tool.” – PC Mag --- GET ORGANIZED Evernote gives you the tools you need to keep your work effortlessly organized: • Write, collect, and capture ideas as searchable notes, notebooks, checklists, and to-do lists • Create notes in a variety of formats, including: text, sketches, photos, screenshots, image files, audio, web clippings, and more • Use the camera to effortlessly scan, digitize, and organize your paper documents, business cards, whiteboards, handwritten notes, and drawings • Use Evernote as a digital notepad and easy-to-format word processor for all your thoughts as they come SYNC ANYWHERE Evernote gives you the ability to sync your content across devices: • Sync everything automatically across any computer, phone, or tablet • Start your task working on one device and continue on another without ever missing a beat • Add a passcode lock to the mobile app for more privacy SHARE YOUR IDEAS Evernote gives you the tools to share, discuss, and collaborate productively with others: • Create, share, and discuss with the people who help get your work done, all in one app • Search within pictures and annotate images to give quick feedback EVERNOTE IN EVERYDAY LIFE • Make personal checklists to keep your thoughts organized • Set reminders to keep on top of activities and write to-do lists • Gather, capture, and store every thought you need to stay productive EVERNOTE IN BUSINESS • Create agendas, write memos, and craft presentations • Annotate documents with comments and thoughts during team meetings, then share with colleagues • Get your projects underway faster and maximize productivity by letting multiple participants access and work on different aspects alongside each other EVERNOTE IN EDUCATION • Keep up with lecture notes so you don’t miss a vital thought • Clip and highlight articles from the web for academic research • Plan and collaborate for better academic group work BETTER NOTE INTERACTION WITH 3D TOUCH • Quick Actions for faster note creation and search • Sketch in notes with pressure sensitive ink EVERNOTE FOR APPLE WATCH • Dictate notes and they will be transcribed in Evernote • Dictate searches and get results on your Apple Watch • View newly created & updated notes • Set reminders, get notifications, and never forget anything --- Also available from Evernote: EVERNOTE PREMIUM - The ultimate workspace. • 10 GB of new uploads each month • Unlimited number of devices • Access your notes and notebooks offline • Save emails to Evernote • Search inside Office docs and attachments • Annotate PDFs • Scan and digitize business cards • Show notes as presentations, instantly (desktop only) $7.99 monthly, $69.99 annually --- Price may vary by location. Subscriptions will be charged to your credit card through your iTunes account. Your subscription will automatically renew unless canceled at least 24 hours before the end of the current period. You will not be able to cancel the subscription once activated. Manage your subscriptions in Account Settings after purchase. --- Privacy Policy: https://evernote.com/legal/privacy.php Terms of Service: https://evernote.com/legal/tos.php 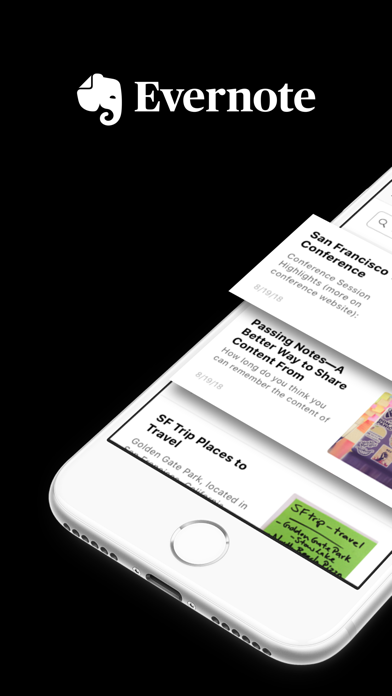 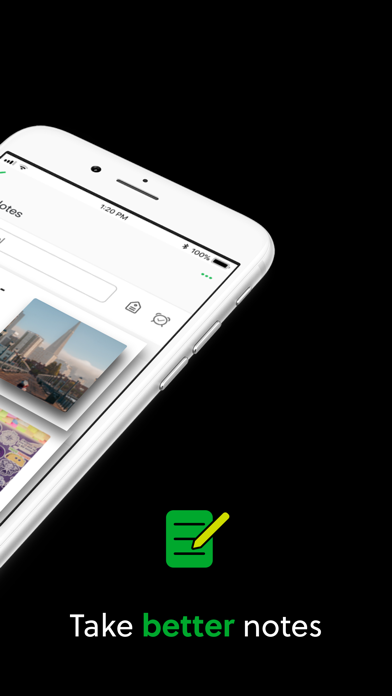 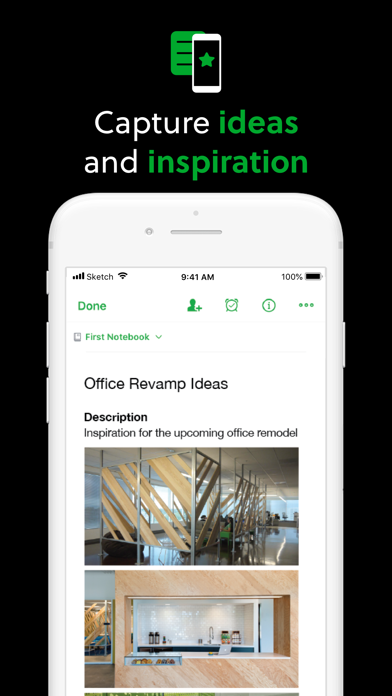 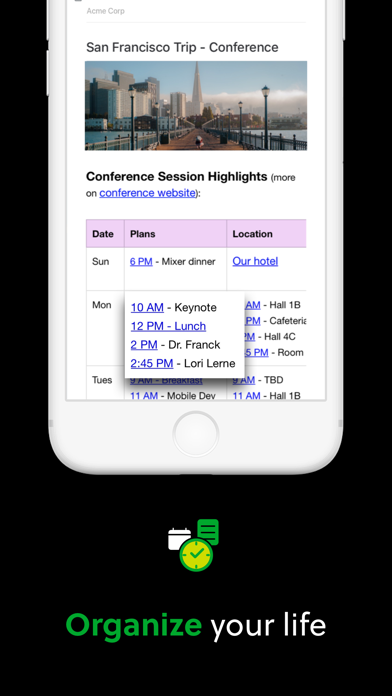 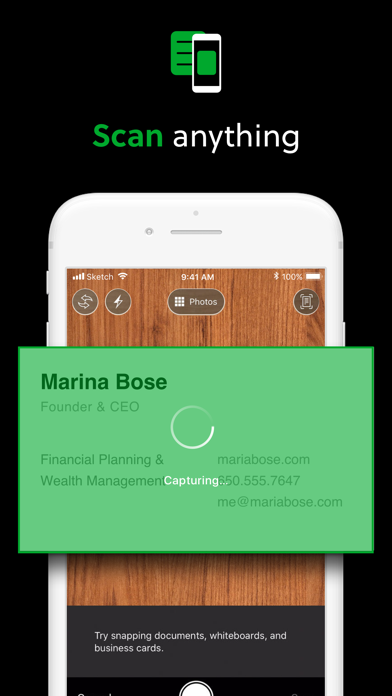 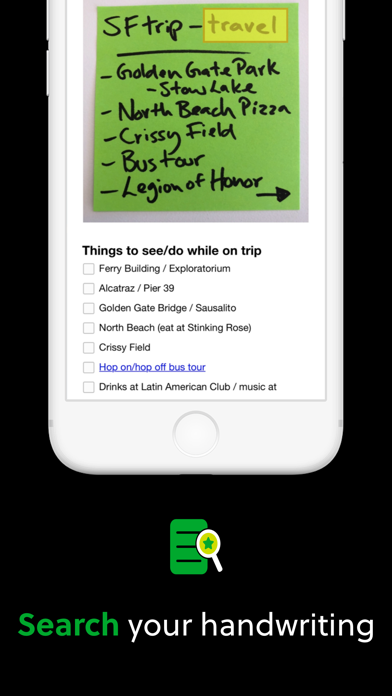 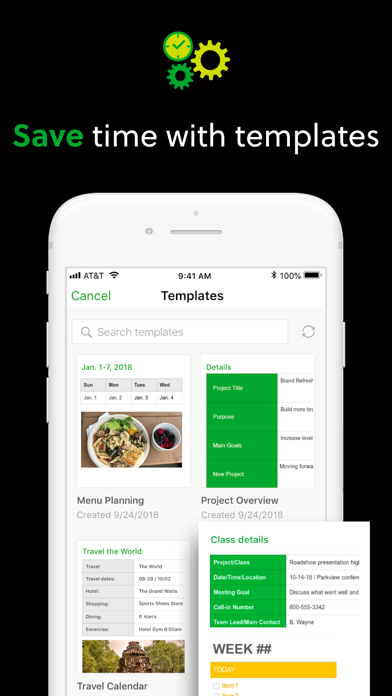 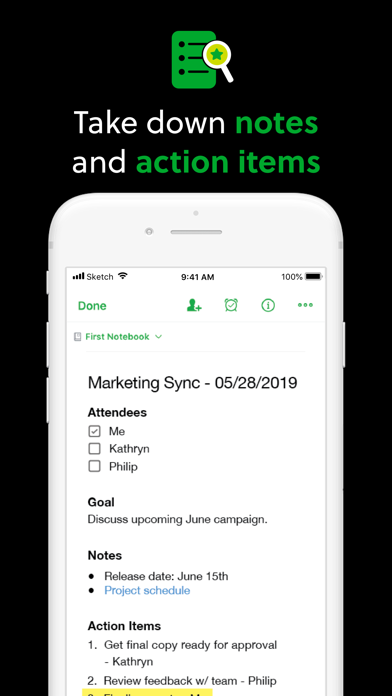 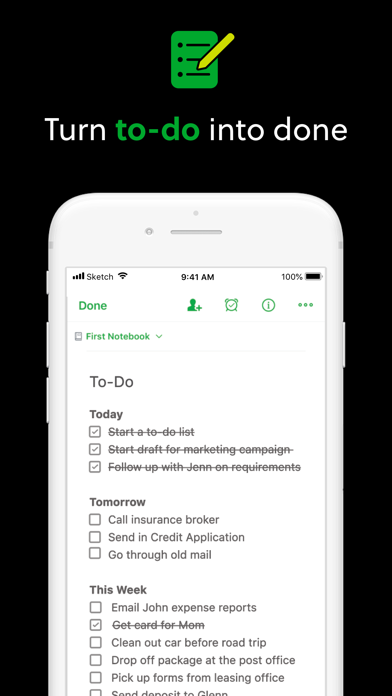 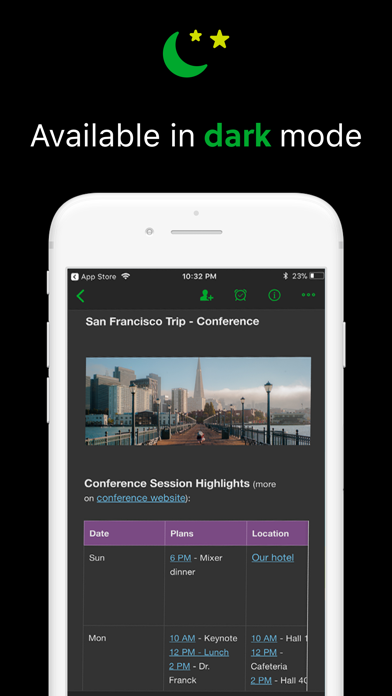 Since recent days, I couldn’t even login to Evernote - it keeps saying invalid email and username. And support system doesn’t even response to my ticket. What a situation ! I wonder if someone is still working at Evernote. What the heck are you guys doing? I have been a premium user for years but will consider other options.
By liemptn

Is it something wrong with the app because i’ve tried to open it, it just shows the logo and then jumps out to the main app — tried several times still doesn't work. Frustrating. Using iphone11 recent update. All my other apps works just fine. Please help.
By ccammychong

Signing in to the app

I can’t even sign in to the ap to see if I like it or not. It keeps denying my email address and user name. Then when I use the one it suggests, it tells me it’s already taken. I give up. I refuse to work for hours on an app that may or may not be beneficial to me. When you fixt this let me know , I might come back
By Me12232012

Normally I would give a 5 star review but the app has been unusable for more than 2 months now. Uninstalling and reinstalling the app doesn’t fix it. If I search for something that is in my notes it sits the search page for 10 minutes then times out. If I search for something that isn’t in my notes it tells me that no results were found. Everything else works fine but the main thing I use the app for is searching for information so with that feature not working the app is trash and unusable. Please fix so I can give you guys a 5 star review. I’m using an iPhone Xs.
By Elfeagle

I recently received a notification that my account was accessed from an iPhone in Brazil, but once logged on I saw that this occurred not once but 5 times from devices in Pakistan and the Russian Federation and Evernote did NOT alert me whatsoever. Be sure to have a strong password and delete any private information you might have! That said, I do not think Evernote is secure at all. Use at your own risk.
By Djwrath1

‘Hands Down’ I’ve been in IT since 1978, from Commadore to out the door. This app has everything for note-takers.Evernote, being part of the MicroSoft Office product suite, I was pleasantly surprised with it being offered in an Apple environment. Granted it was developed for more of a Windows user. I down loaded the iPAD app . I have a new iPAD Air 3 with 128Gb. It worked the same as it did on my PC and Android devices. I can even see all my previous notes from all my devices on my LAN. Copy, Paste, Move works flawlessly. Also, it has a ‘Synch’ feature that all devices get all files updated you’ve listed in preferences. It important to me, when I save notes on my mobile device, while at home, I can go to a different machine located at home or work and have access to those files seamlessly. It’s irritating having to fumble around for a different app that downloads or uploads the file. It always , for me, turns into a digital juggling act. Especially that I’m handicapped. Dealing with SCI and crashing apps is not fun. There is a learning curve which I got through mostly by experimentation for a few days and some help files and DOCs on the WWW. This is a MicroSoft developed app. Yes, I’m a PC user. But only, through the years I could not afford those beautiful MACs. Now, retired and three kids out of my home, I can afford Apple products. My iPAD is a great addition to my LAN. I like “Open Systems”. But, I’m losing count of how many times I’ve been hacked. Apples seem to be more secure. The draw back is your kind of stuck with an OS that makes it difficult to move files around. I had to try out many different note taking apps that would let me decide which machines I wanted to transfer files. Most of the apps displayed a list from the cloud, music,movie, PDFs and download folder from the local device that is in use. Those were the only file locations displayed. Evernote will let you work on files in folders you choose. That is the only draw back that seems to be common among all the Apple apps. I still give Evernote 5 stars. Well, I think my brain is starting to stink. So, I’ve got to go washout my brain.
By Lookingwolf

Fantastic except minor bugs that make daily use tedious and frustrating

I’ve been using this app for a very long time to write and share my notes between my phone and laptop. A lot of my ideas come to me when I’m not near my laptop, so I use the phone app to jot them down and even sketch out scenes very quickly until I can flesh them out later. My problem is this: if my phone screen locks, the app will either refresh or exit entirely. I lose my place, especially if I’m editing a bigger note. I also can’t multitask and tab away from the app to look something up without it refreshing and losing my place. The lock screen issue in particular is very frustrating. I have to reopen the app and find my place again every time. I love this app, but these fixes would improve the quality of the app tenfold.
By Pwntytwn

Evernote is not really reliable and it’s vulnerable to scammers. A month ago the Russian idiots hacked into my Evernote demanding me to pay $400 into a Bitcoin address with 5 days ultimatum or else all my sensitive info will be given to those that knows how to use my info. The hackers not only entered my account, they changed one of my documents to Russian language and left my password and all my documents as proof that they have my info. I changed my password and they still have access to my account as I write now while Evernote did nothing to protect there users info. Despite the fact that I deleted the app I still receive an email alerts that someone has signed in to my account but provided nothing to stop these fools. Anyway, I’ve transferred all my documents out of there...they can do whatever they like with the account.
By justdododo

I installed this app as a place to save notes for an upcoming vacation. It worked fine for that purpose, but I didn’t log in often. I just came to discover that multiple devices that were NOT my own, were connected to my account (for months!). My login history showed that I’ve had people logging into my account from all over the world! I have never had such a blatant security breach, with no notification from the company until this had been going on for months. I deactivated my account and would suggest others look into your account security.
By JSue81

My regular program, some stuff I want to warn people of

Okay I just want to start out saying that this app is the best I’ve ever used. It’s the only app I go to anymore, and it has a lot of space. But there are a few problems I’d like to talk about, because this is something people need to know and I hope the creators fix this. I was putting a 41 second long video on a note, and then it said it wouldn’t sync because I had reached my limit for the month. LIMIT FOR THE MONTH. I’ve used five writing programs other than this and not one of them had that. It’s just... not very helpful for those who want to write. Putting the video in the note at all was also very frustrating. You have to put the video in a file and then attach the file to the note. You can’t just directly add the video. When you upgrade it, you still have a monthly limit. You can put more stuff on, but it doesn’t go away. If you were going to make the maximum larger, why not just go ahead and get rid of it? It would make everything SO much easier. In conclusion, it’s a great program that I’ve been using for a few years now, but it’s flawed. You definitely want this app.
By Avatarnessdogwhatever