Note is a place to form ideas, experiment with sounds and find direction. Get your ideas out or play until inspiration hits using a selection of Ableton Live’s drum kits, synths and melodic instruments. Or create your own sound palette by recording the sounds around you into Note’s sampler instruments using your phone’s microphone. If you want to take your ideas further, use Ableton Cloud to send your projects to Live (version 11.2.5 or later) without leaving the app. Open your project from Live’s browser, then keep working – you can edit all your MIDI notes, and all your samples and sounds from Note are exactly the same. Begin with a beat: • Choose from 56 Drum Sampler kits • Tap out a beat using the 16-pad grid • Quantize your beat to fix any loose timing • Nudge notes to correct mistakes • Add more layers of rhythm • Create beat repetitions with Note Repeat • Change parameters to shape your sound • Experiment with effects Start with a melody: • Choose from 261 synth sounds and 36 Melodic Sampler instruments • Play your melody or chord progression with either the 25-pad grid or the piano roll • Set a key and scale to get instantly harmonic results, or leave your options open • Overdub more layers of harmony • Change parameters to shape your sound • Add effects to experiment with sound design Sample your environment: • Create your own kits by recording percussive sounds into Note’s Drum Sampler • Record tonal sounds to create your own Melodic Sampler instruments • Manipulate your samples by cutting, filtering or repitching them • Shape or transform your sounds with effects Capture improvisations: • Play something, then tap the Capture button to keep it • Play at the tempo that feels comfortable and Note will detect it • Note will recognize the length of the phrase • A loop is created automatically • Quantize it, add to it, or change the sound Create variations: • Note features a grid-based Session View layout • Double your loops to create variation within clips • Duplicate your clips and create different versions of your ideas • Create eight tracks with up to eight clips on eight scenes • Try different layer combinations and song structures • Export your work in Session View as an audio file to listen and share 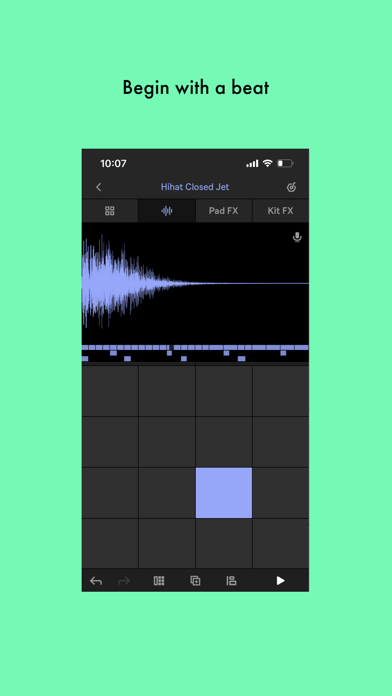 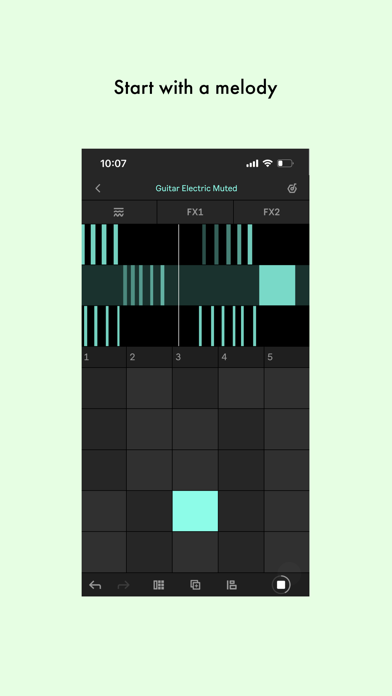 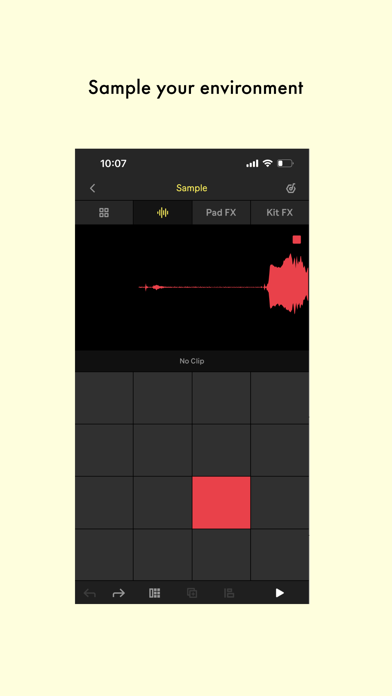 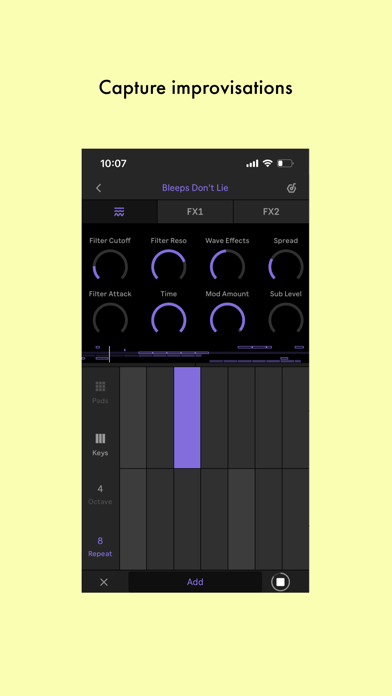 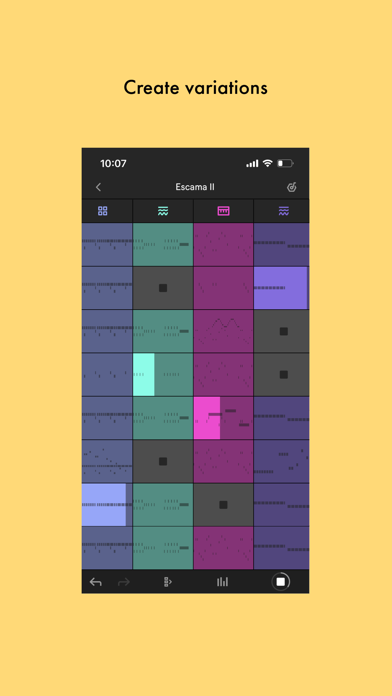 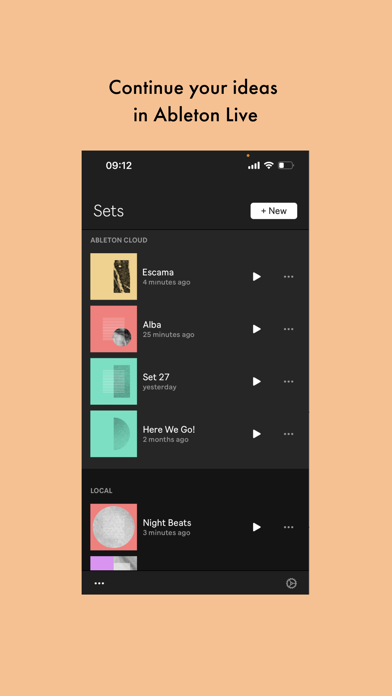 Love it!! Hoping for more

Great app from ableton. Would love some more FX (unlimited per track) as well as access to master channel FX. Would also more of a variety of FX (where ya at OTT, and beat repeat , etc etc. Midi probability and velocity randomization would be cool too!
By paulcpaulc

5 stars because it’s quite a bit more robust than most apps that are billed as a “sketch pad”. Also it is very fun to use. Probably why i find myself wanting to do most of the work within Note. I have a few issues with it though: 1. Desperately needs midi in, especially VIRTUAL midi in. Here on iOS we have tons of amazing touch screen midi controllers and generators that would be an absolute joy to hook up to this thing, especially all the great chord apps. Sorry but it’s near impossible to play in big chord voicings in Note’s cramped playing pads/keys. I have to resort to building harmonies one line at a time. Not ideal for time saving and also not very fun when the rest of the app is tailor made for quick work. Bit of a disconnect, conceptually. Would be especially great for this app in particular because of the capture concept, no need to juggle setting up a count in or record when switching to the midi app, just point the midi at Note and go. Obviously it should accept/record the midi only for the chosen instrument, so you’d have to tap on an instrument and be in that screen and then you’d have the midi coming in. So I have Note open, I have my instrument selected, then I switch to my chord playing midi app, play, and Note captures. 2. Often the tempo detection in free length mode leaves a bunch of space at the end of a captured clip when I really just wanted to play in something crazy and have it be a perfect loop. So we need an actual “free” length mode, where it either loops at the exact point in time you hit the capture button, or automatically sets the end of the clip at the end of the last note captured for truly free loop capturing. 3. The clip launch page has a few dumb things going on: should be tap once on a clip to play it, tap again to stop it. Also needs a “stop all clips” button. Each track needs a stop button up at the top to stop any clip that is playing on that track. It’s quite ridiculous to have to go hunting around for wherever that stop button might be in a column. Even more ridiculous that once all the clips are filled you have to resort to long press on a clip, then stop clip. 4. More internal sounds please. Absolutely appreciate the sampling capabilities and sample import. But it’s still more work to do when I would rather just browse and tweak a greater library of core sounds. Still awesome though, the capture concept is a pure joy. Thanks for the good work!
By Leom187

Had to remove a star, sorry

Ok, already going in the wrong direction for me. Taking away velocity in chromatic keyboard mode was just not smart at all. Especially since we still can’t use midi keyboard controllers, which a lot of people want and tbh, I’m starting to get the feeling is never going to happen. This had the potential of becoming my most used app and now it might be one of those apps that turn into dust collectors for me. I really like it but I might have to delete it if there are no plans to allow us to use midi controllers.
By Strizbiz

Nice start with this app. UI is pretty intuitive. It would be super nice to be able to edit note lengths, and have a slightly visible grid that allows a user to line up notes relative to beat times, this is super useful when nudging and fixing notes.
By beints

I love it, really… but (edited)

I take back what I said. I have gotten a lot better at not hitting the delete button accidentally… some practice with it pays off. I love this app. Yes it is limited, and yes that is the beauty of it. The way it forces you to write things relatively “on-time” is such a chop builder imo. Thank you so much P.s. chance mod would be 🔥📈
By Xadao

First off, I worked on a piece for two hours, and I had it in a really good spot that I was really proud of. I tried, pressing the back button, which is apparently the only way you can save a document, and nothing happened. He tried over and over again, nothing. Tried exporting it. No dice. Button was greyed out. So, I closed down the app, hoping that it would auto save my progress. Opened it back up, and all of my work was gone. It’s really frustrating, because I was really looking forward to it. The other things that bother me are when you’re editing notes there are absolutely no markers anywhere to see where you’re lining up your notes on the beat. There’s no way to drag and swap parts. Like, if I like the part on the third beat, and I want to swap it out with the part on the first bed there’s just no way for me to do that. There are a few other minor annoyances like that as well. Editing anything is its weakest trait. Actually, scratch that, the lack of a continuous auto save is quite ridiculous.
By Fightamin

Haven’t found a way to slice samples. Honestly I would’ve expected that to be a base feature. Seems like this could’ve been better thought out and will ultimately just become an app to sell sound packs to people. Sad because I’ve purchased suite every year for the past few releases and even that is a buggy crashing mess now
By Afriendcalledfive

This app is really good with what it provides but at the same time I don’t take it seriously enough for professional use. Koala Sampler has everything this lacks. I love the idea of note but there just aren’t enough options to use for a satisfactory sampling workflow or idea generator. It seems very behind the times as far as mobile music production goes aside from the in-app sounds and instrument controls. I do like the midi recording approach but find myself dead in my tracks when I go to double the sequence and turn my 1 bar loop into a 4 bar then and 8 bar loop with continuous audio. I like the nudge feature but would prefer to also be able to manually move notes in a labeled piano roll. A couple of tweaks to this app and it could be a quick intuitive workflow but as of right now it’s just limiting enough to push me into other apps, however, as an ableton live user I watch App Store for updates.. hope this becomes something great.
By V Gr0oVe

this app is amazing. the ui and sounds are incredible and the fact i can export it straight to my computer makes it the best way to get ideas down. would love icloud support so i can sync my projects between phone and ipad
By stuff 'n things

I love it
By tihkal2