Unleash the entire Marvel Multiverse in this fast-paced card battler. Assemble your MARVEL dream team from a super roster of your favorite heroes and villains—then make your move. MARVEL SNAP is fast-paced, adrenaline-pumping, strategic card battler that puts you in control of it all. SUPER FAST GAMES No more waiting around! Every game lasts only around three minutes. We cut out the fluff to focus more on the good stuff. EVERY MATCH FEELS DIFFERENT Play your cards at 50+ different locations from across the Marvel Universe, each with iconic game-changing abilities. From Asgard to Wakanda, new locations are introduced weekly to put your creative problem-solving skills to the test. "SNAP" TO RAISE THE STAKES (AND RISE THE RANKS) Feeling confident about your chances of winning? Just "SNAP" to raise the stakes during a match. Hey, even if you're bluffing—you could double your rewards! I AM GROOT I am Groot. I AM Groot. I am GROOT. I am Groot? I am Groot. I AM GROOT! I am GROOT. I am Groot? COLLECT AND UPGRADE YOUR MARVEL FAVORITES No other game lets you collect, mix, and match hundreds of hero and villain variants from the entire MARVEL Universe—and beyond. You might have a classic comic inspired Iron Man card, but do you also have the Chibi, 8-bit, and Cartoon variants? Endless art styles let you flex your favorites in unique new ways. You do YOU! DAILY, WEEKLY, & MONTHLY UPDATES MARVEL SNAP stays fresh and exciting with new cards, new locations, new cosmetics, new season passes, new ranked seasons, new challenges, new missions, and new events on the regular. Come harness the power of every Cosmic Cube in the Multiverse and see how you measure up against the competition. That's MARVEL SNAP! See you in game. 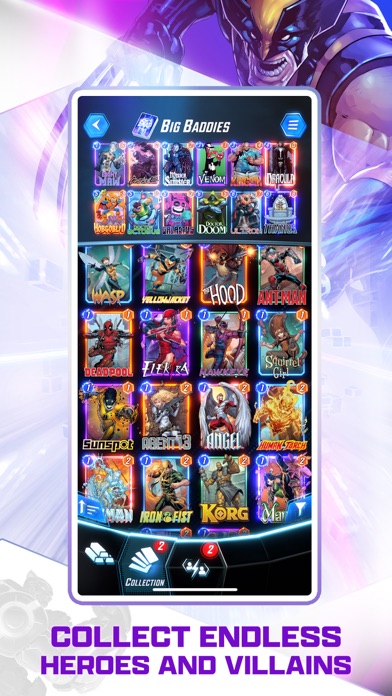 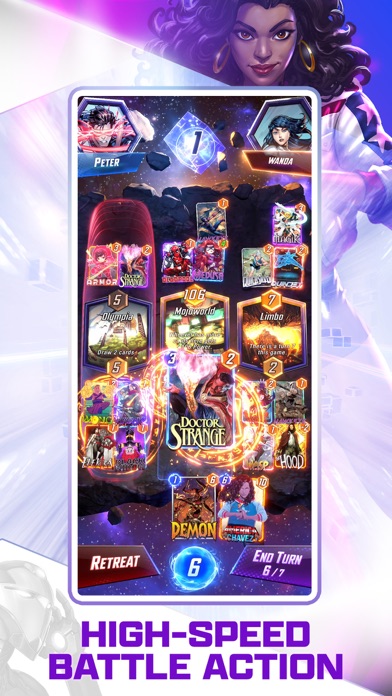 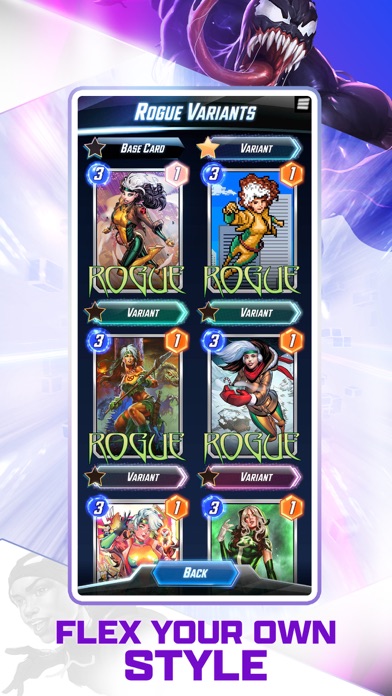 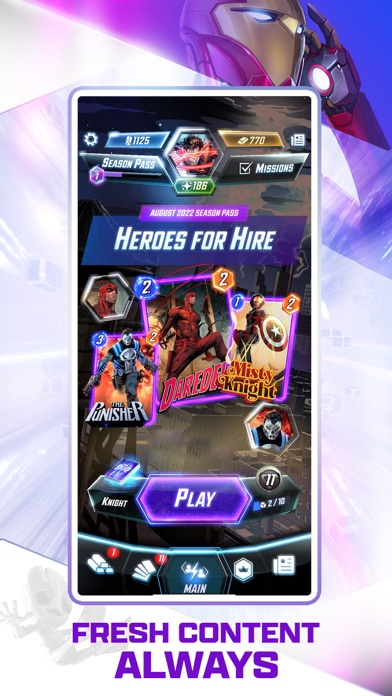 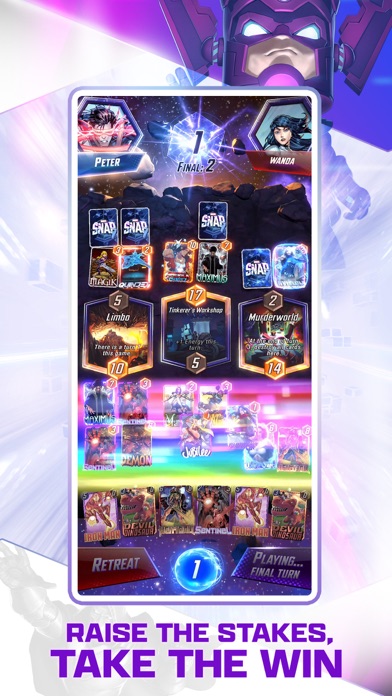 the mechanics and play style is new but thats it. strategy not really even if you build a good deck the game is totally dependent in the 3 random command spots in the middle. fast phase but no base strategy for this game. if you want something new and fast this is for you.
By Red_Moon23

I tried to change my deck then suddenly the game crushed and I couldn’t play my new deck or claim any awards anymore. That happens to me several times and I don’t wanna re download this app over and over again plz fix this.
By dummduue

Great but the Nexus Being is too low

Great game but was pretty surprised to see Wanda Maximoff’s card power was so low.
By ConnorLee.

Pay to win on its way

I noticed that around rank 30 you will never draw the cards you need at the times you need them and the zone conditions seem to specifically work against your deck while always being the exact conditions your opponent needs to maximize their deck’s effectiveness. Also they will always get the exact cards they need in every situation to pull off some insane combo at the last minute that seems like a one in a million chance anyone can pull off. I wondered why these pay to win strategies were being applied to a game where you can’t purchase cards, then I read that they are introducing a new feature soon that sell cards through a token system, some of which will only be available through this market. Enjoy the game while it’s free guys!
By jghyyjy

Why are there so many locations with negative effects? It seems like 2 out of 3 hinder the game most of the time. Can you limit those or even remove all the anti fun locations from the game? Why do I build a deck to just play with random cards, or draw from my opponents deck? Why can I suddenly not play at locations or do the basic rules of the game arbitrarily change? Why do some locations make playing a certain deck an auto win? That’s not an enjoyable aspect of the game and removes any skill that could be applied to deckbuilding. This could be a fun game, but the random locations are so anti fun it’s ruined completely and I find myself retreating instantly when some locations reveal just because it makes me not even want to play.
By Ehyhvdthvdfhj

Marvel Snap is a breath of fresh air in the card game genre. There have been other games like Clash royale and Hearthstone, both of which I’ve played, neither of which I’ve enjoyed as much as Marvel Snap. Well done Marvel and Nuverse! 10/10!
By B3ST G3AM

One of the Best Mobile games I have ever played.

This game is one of the best mobile games I have ever played. I play around 40 hours a week and I still have yet to get tired of it. It took them 4 years to make this game and it truly shows. I am looking forward to the new feature sets coming soon. Devs, keep up the superb work!!!
By Present arms

So many good things about this card game!

Marvel Snap is awesome. It’s got extremely quick matches which makes it easy to keep playing. A lot of games these days, especially mobile games, have predatory micro transactions that can completely ruin an otherwise really fun game. If marvel snap can continue to keep the garbage micro transactions away, I will keep playing for a long time. But I would like to see the additions of like a friends list or even a clan function in someway. Also more modes like unranked, or maybe something like draft!
By JuicyKaroo

I think the game is very fun but I suggest an animation when battle happens like a cut scene. And would also be nice if there was Gacha summoning for cards but beside that it’s quite fun.
By gigadeath73

Can’t get the good stuff on season pass without paying

Pretty fun game but you gotta pay to get cards on season pass which is not worth it. Disappointed in how this is a game made for kids and they make it a money grab
By Ninja18583014

My Time at Portia

Inked: A Tale of Love