PrettyUp is a fantastic face and body editor for videos and photos. We can help you retouch your sweet selfie video and selfie like face retouch, smooth skin and reshape body. Come and try this face beauty camera and video body editor to edit perfect selfie videos, make vlog and edit live photo video, supporting video and picture editing at the same time. Are you still annoyed by shooting videos or photos without showing your best or the problem of face and body get distorted by camera? Prettyup will work it out to restore your beauty and save your precious moments. Video Body Editor -Reshape body: slim and skinny. Powerful retouch tools and body changer prepared for you. -Slim your waist and easy to get thin waist and perfect figure. Easy to edit body shape and smooth. -Body enhancer: workout longer and awesome legs. Make you tall and get model legs in videos. -Make your body slimmer and help you fix body and smooth body skin in videos. Excellent body edit app and wonderful portrait video editor for you to tune. Face Retouch -Face Video editor helps you tune pretty face and brighten video selfie. Easy to edit portrait video. -Reshape face in videos naturally: easy to make face thinner and help you get strong jawline. -Face shrink: make your face slimmer. Get your video with our beauty video converter. Edit your face shape and smooth face easily. -Perfect nose editor and eyebrow editor for portrait camera. Big eyes for facelift to make you beautiful. -Lips plumper designed for you. Multiple face filters are waiting for you to try in this magic selfie editor. Beauty Face Camera -Face fixer helps you fix all the facial problems: remove acnes and smooth face. The smoothing app is also a great face cleaner to get glowing and smooth skin in videos and photo. -Teeth whitener and remove blemishes bright your aesthetic video. Younger face is easy to get. Perfect smile editor for you to try. -Face enhancer: remove wrinkles, eyebag and nasolabial to get face smoother, retouch your face and bright your makeup and even your skin tone on foto and live photo video. Video Filter Editor -Multiple face filters prepared for you. Popular beauty filter brighten your videos. 60+ styles of face filters: Selfie, Ins, Retro, Artistic... More selfie filters and effects are coming. -Useful adjust tools to enhance your videos. Enjoy advanced editing tools to make your videos cool. Experience the wonderful video enhancer and face app editor now. PrettyUp helps you retouch selfie videos and vlog. Although life is full of trivialities and troubles, don’t hesitate to create best memories with PrettyUp and embrace your ideal life. Remember, you were born to be beautiful. We do not need to live up to anyone's ideal since beauty is something that cannot be standardized. All body shapes are perfect. Subscription: - With VIP you can subscribe for new resource updates and unlimited access to all content. - Subscriptions are billed monthly or annually at the rate selected depending on the subscription plan. Alternatively a one-time payment plan is available. - Payment will be charged to iTunes Account at confirmation of purchase. - Subscription automatically renews unless auto-renew is turned off for at least 24-hours before the end of the current period. - The account will be charged for renewal within 24-hours prior to the end of the current period at the cost of the chosen package (monthly or yearly package). - Subscriptions may be managed by the user and auto-renewal may be turned off by going to the user's Account Settings after purchase. - No cancellation of the current subscription is allowed during active subscription period. - Any unused portion of a free trial period, if offered, will be forfeited when the user purchases a subscription to that content. Privacy Policy: https://www.floatcamellia.com/privacy.html Terms of Use: https://www.floatcamellia.com/agreement.html 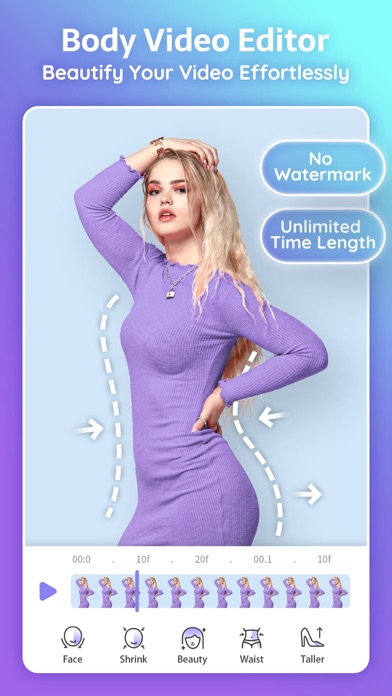 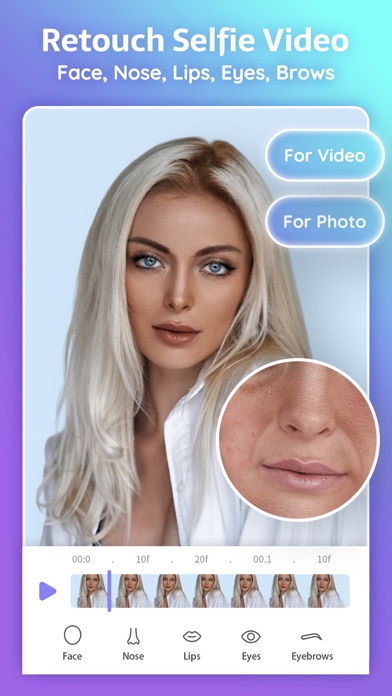 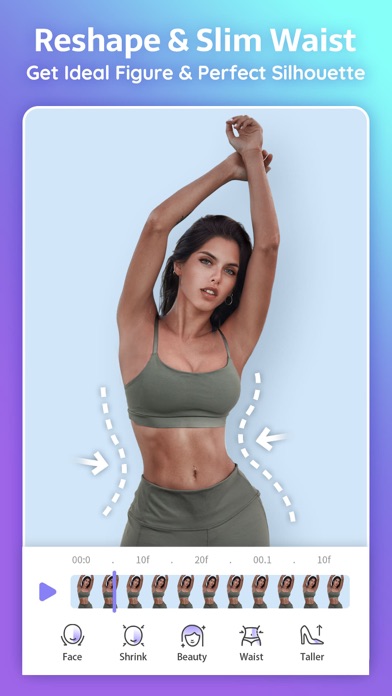 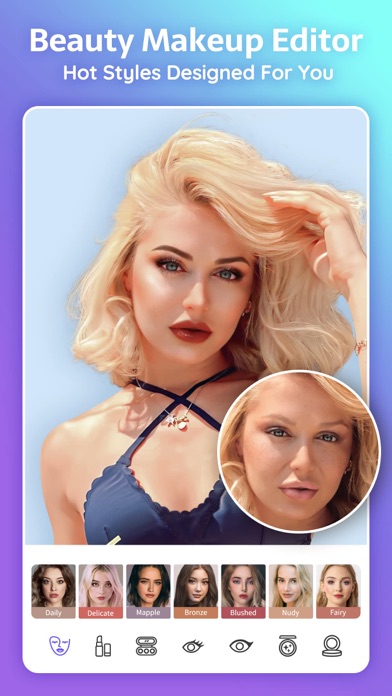 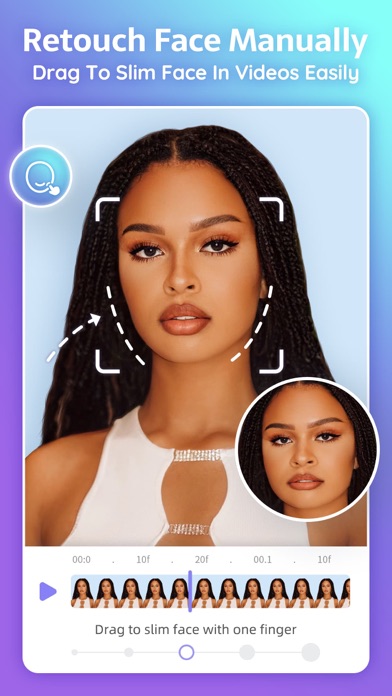 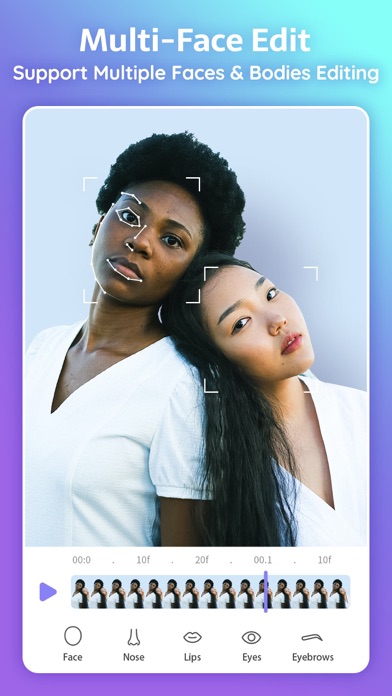 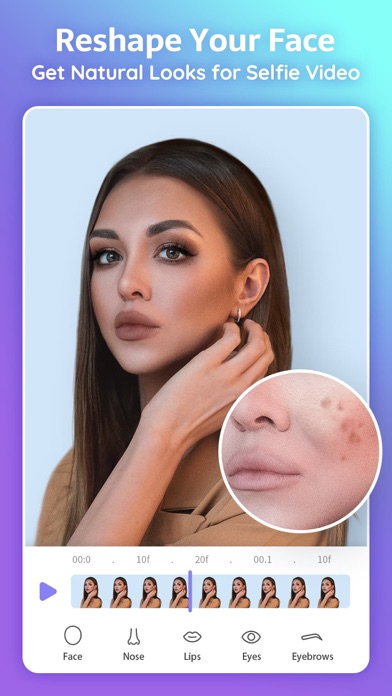 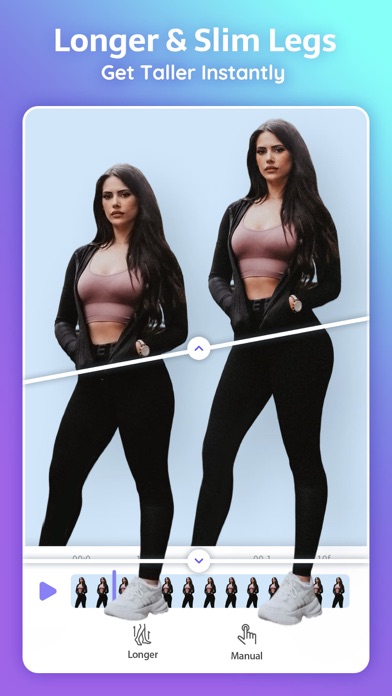 Love it so far! How do I get the app to recognize another face in the photo so I can edit it?
By IXMANNY

I just Renewed my subscription only for this to not work. It won’t even let me go to the editing screen
By CherryDonDaDa

Dont use or buy this app

This is the best app I’ve had found for editing body in both video and photo. And it’s easy to use and it’s not like some of the other apps that make you look almost like a cartoon (although, some of the make up on this one, obviously it’s outrageous, but it’s a choice at least). I also like this app because they don’t seem as invasive as other apps. Meaning, similar editing apps I have used in the past, when I read their privacy policy, I realized they were just data miners in disguise; meaning they wanted access to every single item on my phone and it just seems silly for a photo app to need to read and keep every single text message I’ve ever sent. Anyway, I do recommend this app. Easy to use and has all the basics for looking good. Longer videos I would recommend cutting up into shorter bits when you change postures because it will just make it easier to edit part of your body and not have it change every time you move. Request to app makers: I would like to have a few more filters or AI that can help with enhance/beautify features on the face without having to add make up to get that done. Also, and this is an odd request, but I’d also like a way to do a quick enhancement of the face but also have a choice of whether to leave in or take out the wrinkles, because often I just wanted smooth skin but I still want to look my age. And certain ones, like smile lines, I want to show. Thanks so much!
By imagained

I used to love this app and thought it was worth it so I upgraded it. After doing so the app became so slow and wouldn’t load. Now the app wouldn’t even let me enter and the screen freezes and then kicks me out to my Home Screen.
By jimmyjunes

I loved this app and chose to upgrade and pay which was worth it for me because I use it a lot. I started becoming disappointed because every time I opened the app, it was very slow and wouldn’t let me click to the editing screen until maybe 30 seconds after opening. Now it won’t even go to the editing screen at all!! It just freezes on the Home Screen or crashes immediately after opening. I haven’t been able to use it for a while and I’m considering canceling my subscription if it doesn’t get resolved. I’ve tried restarting my phone and uninstalling and reinstalling and it still won’t work. Please please please fix this bug!!
By Colenoelle

app still won’t open after reinstalling. please fix i used to love this app and use it everyday
By cheeryah