Battle through a series of challenging Arenas and prove that you have what it takes to enter the fabled Hall of Masters and seize your glory! From the creators of Bloons TD 6 comes a brand new installment of the top-rated head-to-head tower defense game. Gather your Hero, choose your team of powerful Monkey Towers, and prepare to battle one on one against other players and relentless waves of Bloons! Competitive Tower Defense! * Outwit and overwhelm your opponent in intense head-to-head play * Balance the strength of your defenses while preparing a Bloon offensive that blitzes your opponent * Countless strategic combinations can lead you to victory Skill Based Gameplay! * Match with players of similar rank as you work your way through 9 unique arenas * Reach Hall of Masters to battle the best on a dynamic elo-based leaderboard * Earn and display unique badges each season based on progress Lock and Load! * Select from familiar Heroes and brand new Alts with unique upgrades * 21 Monkey Towers with 15 unique upgrades each to customize your build * Brand new Bloon send system optimizes economy building and attacks Build Your Bling! * Win in style as you customise your loadout from hundreds of cosmetic items * Flex with unique animations, emotes, bloon skins, and more * New content added every season! And of course tons of content and new feature updates are planned to make Bloons TD Battles 2 even more awesomer. What are you waiting for? It’s time to Battle! 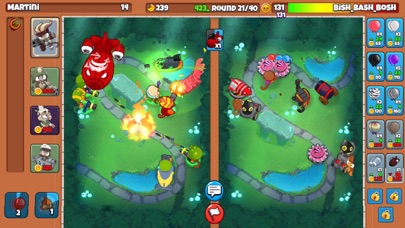 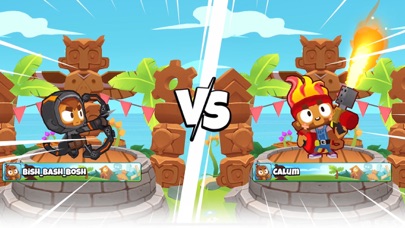 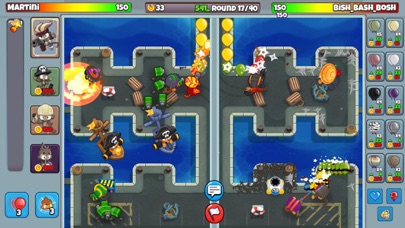 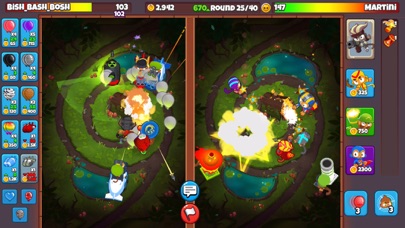 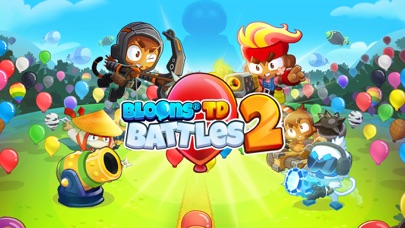 I looked forward to playing since the early access. But soon when i played it had much more bugs than the early access had. Today the game is just fixed with xp fixed. But the xp isn't kinda fixed. It took me 15 or 12 games to get a tier 3 and that took so long. But i was still in the starter arena. It took me all the way to the 3rd arena to get a tier 4. Pulse we need tower debuffs and a fix with the Legend of the night. First the Dartling Gunner. It has 3 pierce. It hits 3 moabs at a time with a 0-3-0. Which i know the Dartling does not do as much as it did in BTD6. Next is the ninja. The bombs stack. Which does massive amounts of damage. The legend of the night does not work like it did in btd6 you could destroy anything with the legend of the night. But in here it can’t kill BADS And FBADS. Another thing is the ADS. Every 2 games i do i get Atleast 1-2 ADS. Someone are timed. That is it. Please fix this ninja Kiwi. (Sorry if my grammar is bad
By yendire

Disappointed by the inclusion of ads.

I wanted to give this game a chance. Uninstalled when I saw it was going to be a ad-laden cash grab. I’ve been playing various iterations of Bloons TD for years and am very disappointed that they’ve gone this way.
By Tiraven

Awesome game but XP price for two red is too high

Bugged towers that players are abusing to win, developer is taking 3-4 weeks to release each patch instead of hot-fixing immediate game-ruining bugs. Lots of hackers and cheaters. Worst of all the game consistently crashes if there are too many bloons or towers/abilities, so you spend 20+ minutes on a match only for the game to inevitably crash causing you to lose every time. This game has a lot of potential but they launched it in a horrible, broken rushed state. Going to take them 12-18 months to fix it at this rate.
By Neil T..

Unbalanced, slow progression, too many ads and cash grabs

Blooms TD 6 is one of my all time favorite mobile games. This feels like what happens when business people make a game rather than game designers who try to make games actually fun. Tower level matters a ton but takes forever to level up. PvP pits new players against pay2win VIP players. The games themself, which should be the highlight of the game, aren’t that fun. You’re heavily punished for experimenting with different towers. Winning is too heavily rewarded, which ironically incentivizes players to lose so they can play against worse players so they can win. You’re punished for spawning the big blimp bloons. But hey, you can pay money to make the game slightly less unbearable! The business people who made the game sure hope you do!
By Scarlsby

Keeps asking to download latest update every time you open up the game. That’s what the App Store is for
By Shenudes241

OMG I love this game so much! One thing I would love is if u guys add spectator mode.
By Jay2747274

Great but a small problem

I would like to point out that when I experience connection errors it says that I lose and I lost a trophy because of it. So I would like you to fix this bug.
By shshsgvxcxgcxfcxccccccxcc

I’ve played the game for a few months and really enjoy it’s concepts but now that I’ve gotten into the game and spent some money I can’t seem to even finish a game. I get a “syncing game” pop up that won’t go away unless I close the app. This is dumb considering I rarely finish a game now, and if you don’t finish, you don’t progress. Other than that, it’s an okay game. It’s ironic I never had these issues before I spent money but now its getting to the point I felt the need to write this review. This has nothing to do with signal or connection on my end, as I have a pretty stable connection. Overall great game, just don’t get too invested in case it messes up
By Me.Ash

Still a great game but suffers from a lot of the same issues from the first game.

I loved the original game and when I saw that they released a sequel, I was excited to try it out. Unfortunately the game suffers from a lot of the same problems as the original, the matchmaking is relatively the same which is fine. But I was hoping that they would implement a feature where if you don’t have all the monkeys unlocked or all the upgrades for those monkeys then you would get matched with people who also don’t, I have no problem playing with people who have everything since I still remember how to play from the original but a simple toggle option for new players would be nice. Also there is a new issue in the game where if you upgrade a monkey in a certain discipline path; the game won’t tell which upgrades you can get next, why did they get rid of this?!? It was a simple feature and now it’s gone. For example if you wanted to get all the starter upgrades to get a coconut cannon then the game would tell you “unlocks path to Coconut cannon” or “Unlocks path to MOAB mauler” and it would show a picture of the next upgrade faded black and with a red arrow. I hope that they add this back because it can-be really confusing to remember what upgrades lead to what when you’re rapidly placing down monkeys in a tough round. Loving the game so far but it could use these improvements.
By Driverforever23