Make your day more special with a message like a gift from your favorite idol! Start bubble right now and don't miss out on special private messages between you and your favorite idol! -------------- [Service Overview] 01. Favorite Idol's Everyday Story Receive a special everyday message from the artist who calls your name. 02. Favorite Idol's Dedicated Content See dedicated content sent directly from artists. 03. Your favorite idol is waiting for your reply Reply to the artist with a message filled with encouragement and love. 04. Anniversary with Your Favorite Idol Today is Day 1! See the special anniversary date between you and your artist. 05. Chatting in my language Read the artist's message and send a reply in your language. 06. Open Chat in Your Style Meet friends with similar interests in open chatrooms. [Optional Access Authority] * You may still use the app even if you do not allow optional access authority. 01. Photo Gallery Used to send and store photos and videos and to set profile pictures and chatroom background images 02. Camera Used to film and send photos and videos and to set profile pictures and chatroom background images 03. Mic Used to record and send voice messages and videos [Subscription Products] 01. bubble for JYPnation benefits - You can select artists to receive bubble messages from according to the number of artist subscription coupons you have purchased. - Receive bubbles sent directly from the artist of your choice. 02. Subscription Prices and Period - Subscribe through iTunes, and the payment amount will be billed to your iTunes account. - Prices range from $3.49 to $40.99. Prices may vary depending on the number of artist subscriptions you purchase. Please refer to the bubble purchase website for details. - Subscriptions are monthly and automatically renewed. [Terms] 01. Terms of Use https://ba-api.dear-u.co/terms/?msgType=service&locale=EN&appGroup=JYP 02. Privacy Policy https://ba-api.dear-u.co/terms/?msgType=privacyPolicy&locale=EN&appGroup=JYP [Information] - Questions/Suggestions: help_jyp@dear-u.co 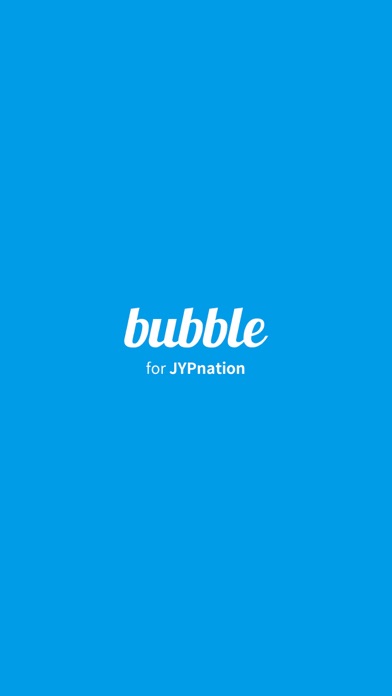 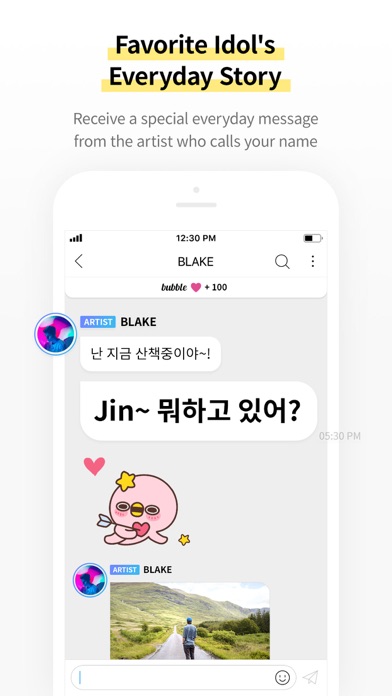 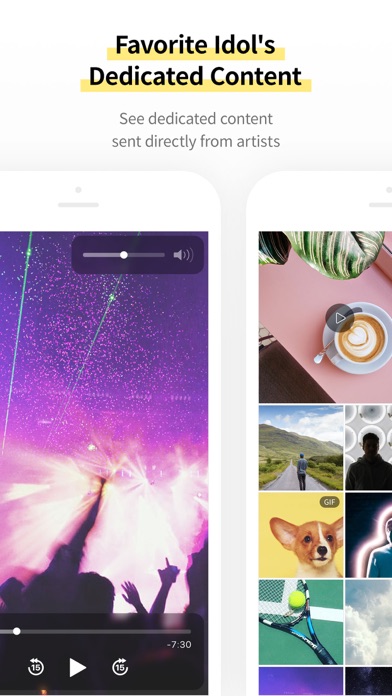 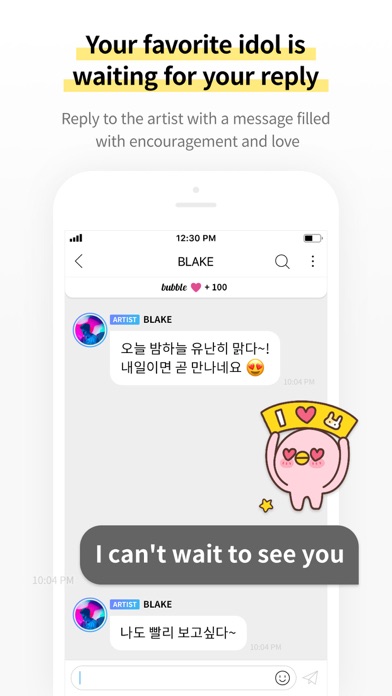 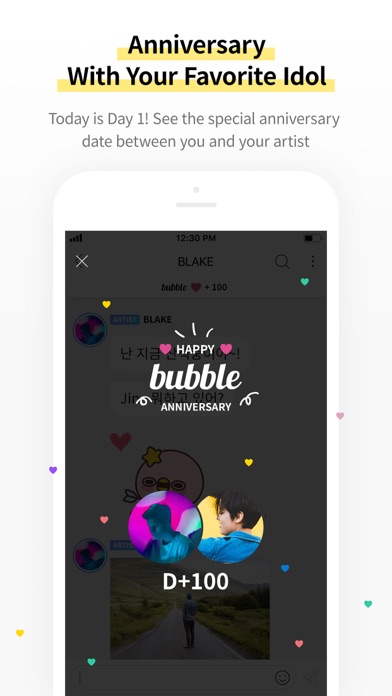 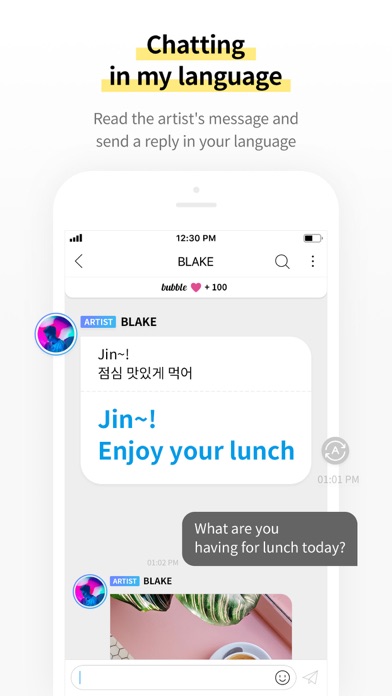 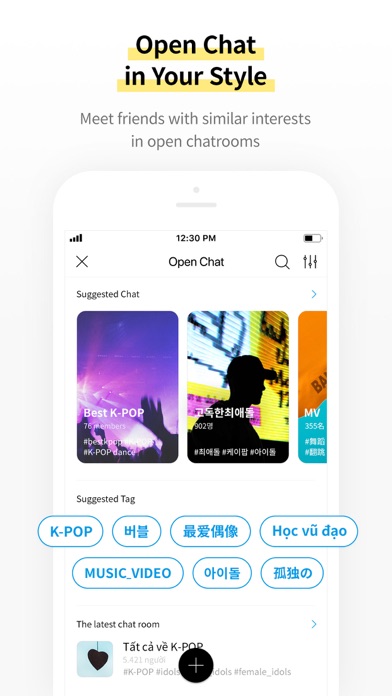 Tickets should be free.

Hello, as the title says the tickets should be free where fans an talk to their idols without buying tickets to talk to them. People like me can’t afford them because we aren’t allow to, or we don’t have the ability to afford it. The price are too expensive. Kids should be able to talk to their favorite idol for free, and not pay 3-20 dollars for a ticket that only last for a month. I expected this app to talk to idols for free not to pay tickets to talk to them. I just wish they were free, and able to talk to them freely whenever we want. Another thing is that you could add a ticket that is free, and that it also last a month or so, but you have to wait I don’t know around 10-28 minutes to earn it again once your ticket is done. I never got the chance to talk to an idol due to the cost of the tickets, so I wish you could change it, but it’s your choice if you want to do it, or not. I’m not forcing or anything I’m just wishing it was. You probably won’t see this, but it’s fine I really don’t get recognized by any app creator.
By .,.,.,,.,..

Great but a bit expensive too

At first I really didn’t get the app at all but when I got BangChan and Felix and Han it was getting to me more and more, the most annoying thing is paying because the bubble chat got up a bit more it was I think 7.99 for three and now it’s 9.99….. But still I love them the amazing part is that Felix text a lot he will say “how are you doing?” Have a goodnight and leave’s a lot of voice messages for you and recommend you his favorite music to listen when you can’t sleep or other things BangChan just tells you how he is doing or what you are doing, Han texts you what he ate or talks about his dog that I forgot it’s name oops 😬 sorry but they tell you about a lot of great things Felix has texted me a lot in English and BangChan leaves Korean or English text message but if you want to get I would do two or one not three it was cheaper but it went up by three dollars
By Jjngkook

The app is real, the idols are real, but the stickers

I am in love with the stickers so much~~ is there anyway y’all could make an app so I can add them to my keyboard.. that would be amazing also,,,, buy the tickets if you want to~ the idols are cool. The app is like a big group chat but the only thing that you can see is the idol you are talking to and yourself. Since it is like a big group chat if they send a text that makes no sense it’s completely fine. behind that group chat is an idol and their fans
By Stob_It

This app is the worst. I bought two tickets just for the months but now it’s making me pay MONTHLY for these tickets. Not worth it at all they are not specifically talking to you. Never again am I using this app. Had the worst experience.
By cireney

I was told I’d get a birthday message but I’ve never received one before. I appreciate their kind words but is it really worth it if people share this info online and others get it for free?
By lacejean

pretty good app (read if your thinking about getting the app)

I talk to Sana Dahyun & Momo but there’s one thing that really bothers me. Which is the transition the transition was so bad when Sana said walkway it transitioned to motherf-cker. Please fix this transition.
By Honest Reviews 💘

I’m mostly good with this app, but there are some glaring issues I’ve come across lately. The recent update killed screenshots, so it’s difficult for those trying to translate what the idols are saying because the in-app translation is so bad. But my biggest issue recently is that multiple account holders can have the same ‘nickname’. I’ve come across this last 3-4 months, where I see my ‘nickname’ (user ID) come up in conversation with idols, but have absolutely no idea what they are responding to, as I never made a comment to them involving the topic. It happens even more frequently now. So even though you may pick a ‘nickname’ (user ID) there’s no protection from others using that same name. This really needs to be addressed in a future update. No one should have the Nicknames for this big of an app that connects fans to the idols of their choice.
By CloudSoul784