Keep control of your news reading with Reeder, RSS reader and read later client in one app, now with support for iCloud syncing. FEEDS Sync all your feeds and articles with iCloud. Reeder 5 comes with a built-in RSS/Feeds service which will keep everything in sync on all your devices. Of course, this is optional. You can still just use one of the many third-party services supported by Reeder or just RSS (without sync). READ LATER This is Reeder's built-in read later service which stores all your data securely in iCloud. A sharing extension allows you to add links from outside of Reeder. BIONIC READING A higher dimension of reading. With Bionic Reading you read texts with more focus, awareness, and sustainability. Read more about Bionic Reading at bionic-reading.com. MARK AS READ ON SCROLL With version 5, Reeder finally supports marking items as read while scrolling. Off by default, this can be enabled on a per-account basis. READER VIEW Enter Reader View (for feed items and read later links that support this) for a clutter-free reading experience directly in Reeder's article viewer. You can enable "Automatic Reader View" on a per-feed basis to always load items of a feed with Reader View. SUPPORTED THIRD-PARTY SERVICES Feedbin, Feedly, Feed Wrangler, FeedHQ, NewsBlur, The Old Reader, Inoreader, BazQux Reader, FreshRSS, Instapaper and Pocket. 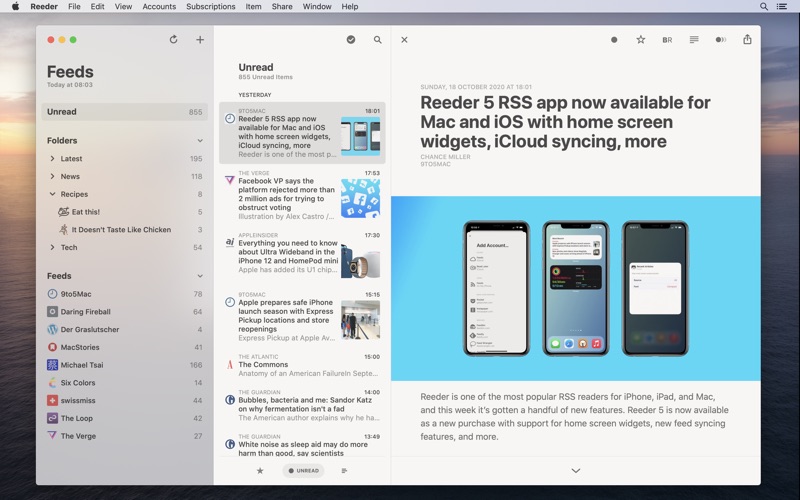 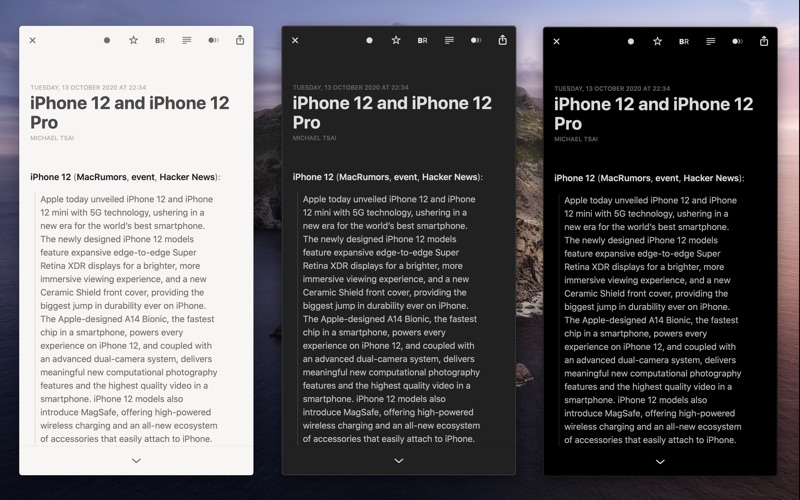 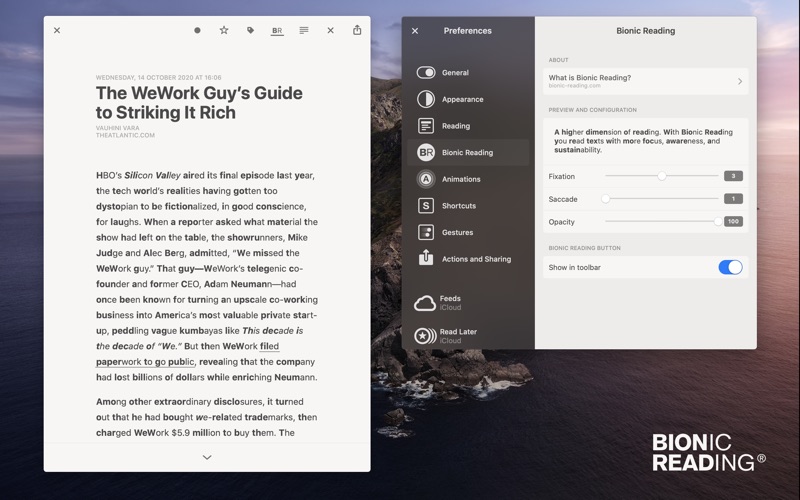 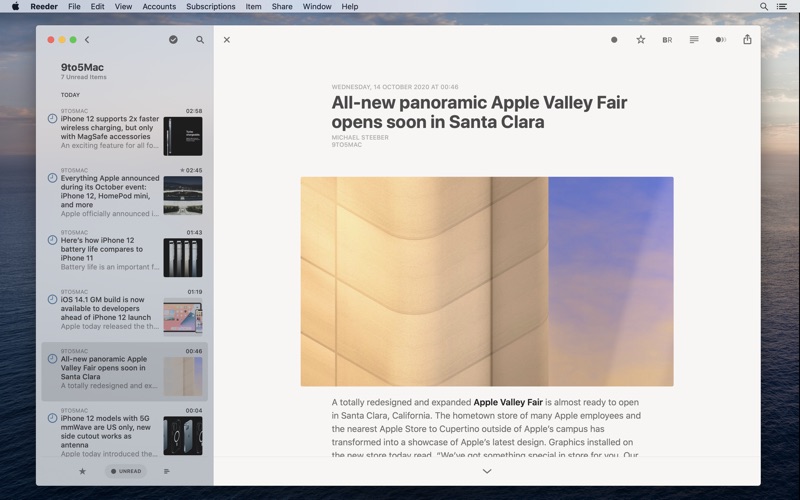 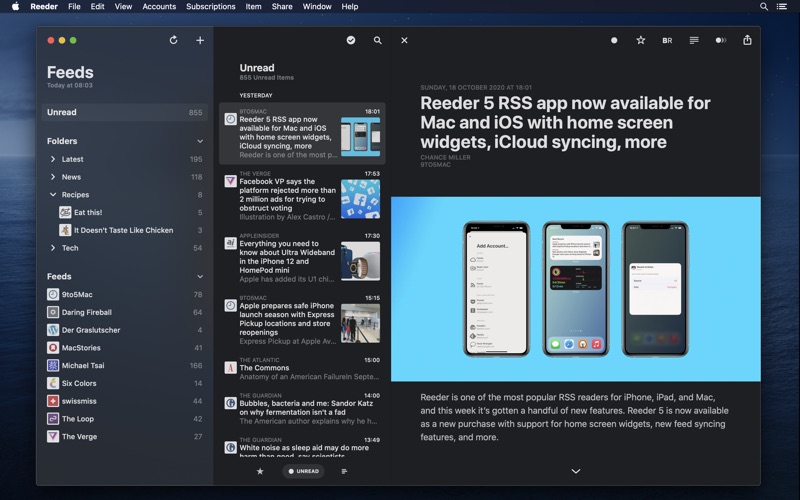 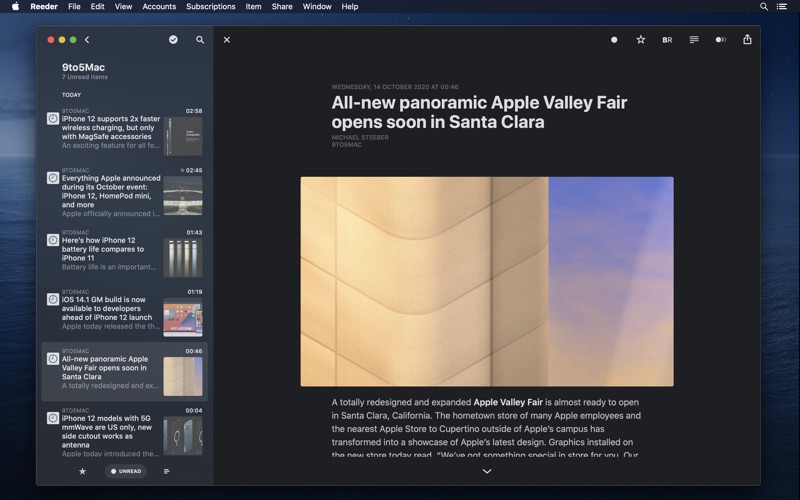 I love the new iCloud feed feature. It's allowed me to leave Feedly and that alone has made this upgrade worth it. I was hoping this version would fix the dimmed/semi-transparent image previews in the side bar article list, but no such luck. If the previews dimmed *after* reading an article, it would make the app that much more usable. This version also doesn't appear to have icon customization built into the app, which is unfortunate since the new cloud icon is dreadful.
By Sollicitudin Dapibus

Allows ads in built in browser

This app is useless to me as it allows ads in the built in browserand I assume tracking as well.
By snookie1

Silvio, thank you for your commitment to keep Reeder the best RSS reader on the App Store and for keeping the upgrade model practical for you and your users. Reeder 5 on Mac and mobile acquired.
By jpsweet

This app is fine, but I prefer NetNewsWire for just general use and aesthetics. iCloud syncing is nice but not worth it for me given NNW's use. Reeder is too faint, text is too light, even with contrast enabled. Given you probably don't want an NNW advertisement on this board, I'll stop there.
By jhewell

Reeder is one of the classic RSS readers for Apple’s platforms. I love the beautiful clean design that focuses on the content you want to read. Until recently, you needed to subscribe to a 3rd-party service to have your RSS feeds be synced across devices. With the addition of iCloud sync, you now get that for free, under your own control and, in my experience, faster than the 3rd-party services. This is a killer new feature. The first widely-used RSS reader to do this was News Explorer. Comparing the two, Reeder has a ways to go. Unlike News Explorer, updates made on one platform in Reeder do not sync instantly with other platforms. And when I marked all of my articles read on my Mac, after the initial import, this did not sync with my phone until I manually synced the feeds again on the Mac. News Explorer offers another key feature, which is the ability to follow Twitter feeds as well as RSS feeds. This lets me follow people without diving into the toxic waste pool of Twitter itself. I sorely miss this feature in Reeder and am looking for other ways to get Twitter content into Reeder. However, the design and presentation of articles in Reeder is more attractive, and it has far fewer, and far-less-confusing settings, while still being customizable in the areas that I care about. I like what I’ve seen so far, and I’m happy to give it a try as my main RSS reader.
By Nate

I was not expecting a new version of Reeder but it's always a pleasant surprise! Reeder has been my go-to RSS reader for years on iOS and Mac. This latest iteration is awesome. It keeps the slick appearance but makes improvements to functionality. Looking forward to trying out iCloud feeds. The ease of importing your accounts from Reeder 4 makes setup so easy as well. Delightful. As a final note, thank you for not going the subscription route! I have so much respect for that. I assume things are going to be subscription based these days and it's always a pleasant surprise when something is not.
By SeanSnodgrass