Find the perfect time to catchup across multiple time zones without the mind-bending math. Our team works across 5 different time zones, which was sending us a little crazy trying to find a meeting time that suits us all. What worked for Melbourne and Singapore didn’t work for Milan and North Carolina. We needed to see all the time zones we cared about in one place and we needed a smart way to find when everyone’s available hours lined up. So we created Overlap. It’s a smart world clock that magically finds the ideal times where available hours overlap across multiple time zones. With just a swipe you can smoothly move through time, making it simple and easy to understand what the time will be for any place in the world. You can choose ‘available’ hours for each time zone. For example Dan in London might be available from 2pm to 5pm and Rashida in Sydney might be available from 7am to midday. Swipe up the Overlap Graph and it will magically show you the most compatible times to schedule your catchup. The more convenient a time is for everyone combined, the higher the graph goes! Overlap also displays your calendar events, so you can always find a time that suits your schedule. Available on iPhone, iPad and Mac. Here’s why you need Overlap • You can see multiple time zones in one screen - no more Googling 'What time is it HERE when it's this time THERE'. • You can swipe left and right to quickly scope out the best time to meet for everyone. • You'll save time by not hurting your brain trying to add and subtract 8, 4, 12 or whatever hours from another time zone. • You won't be left waiting for someone to join your meeting and going 'Ah! Forgot about daylight savings!' and then having to have the meeting an hour later. • You can customize 'availability' for each timezone - this could mean office hours for a meeting or simply when you're available for a group chat with your far-flung family - eliminates the need for endless messages of 'Sorry that's 3am for me!' • You can rename each time zone; for example, you might simply rename a time zone to say 'Grandma' or the name of a client you work with. Or perhaps your Grandma is your client, no judgement here. • You can hide time zones that you don’t need right now so it’s always easy to focus on what you need to know. • You can show your calendar events so you can always choose a time that fits your schedule. • Once you’ve chosen a great time its easy to share it via your favorite messaging app or create a calendar event. Overlap is a complimentary app to the Moleskine Studio suite - download it now free! 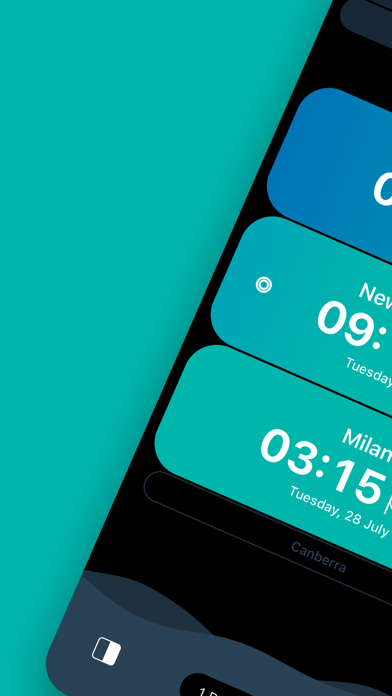 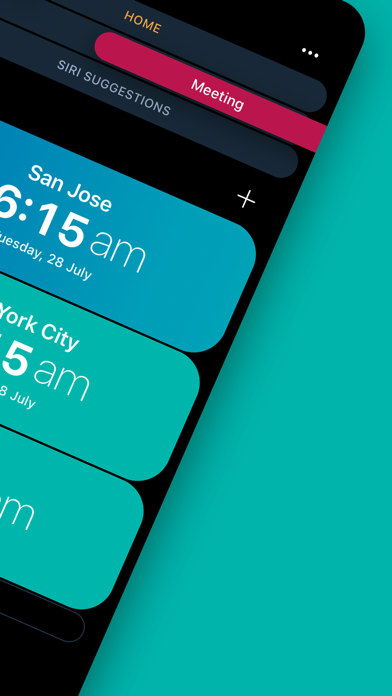 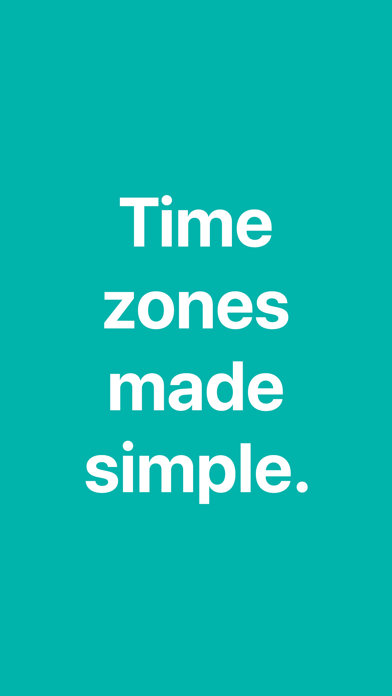 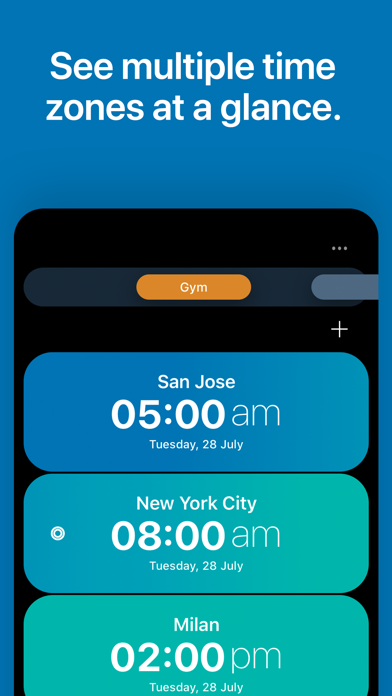 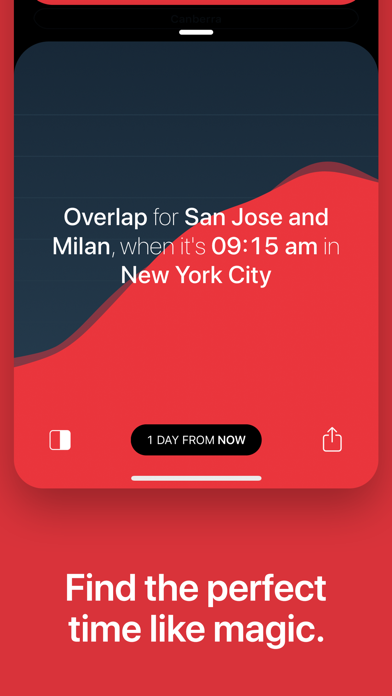 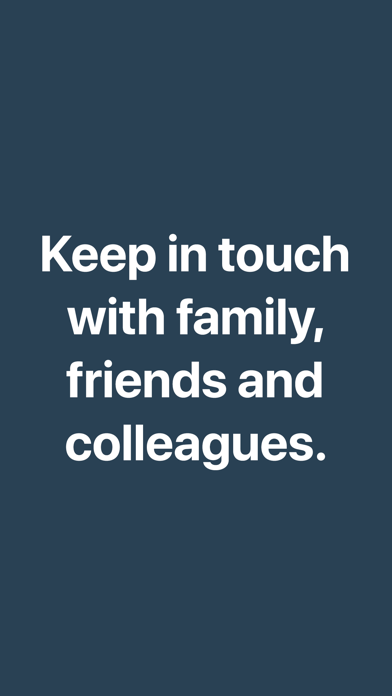 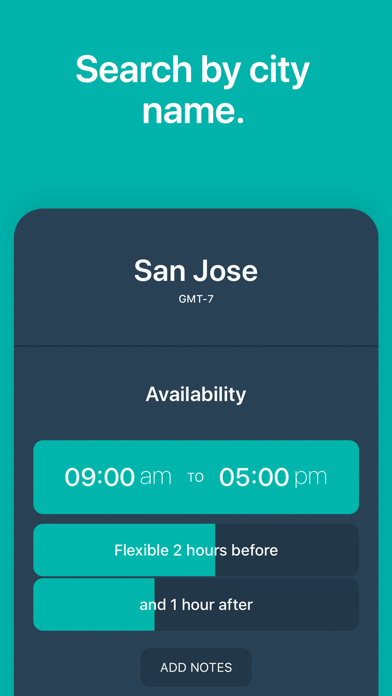 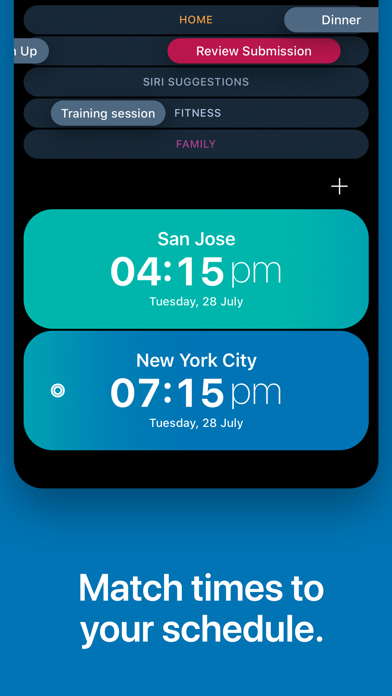 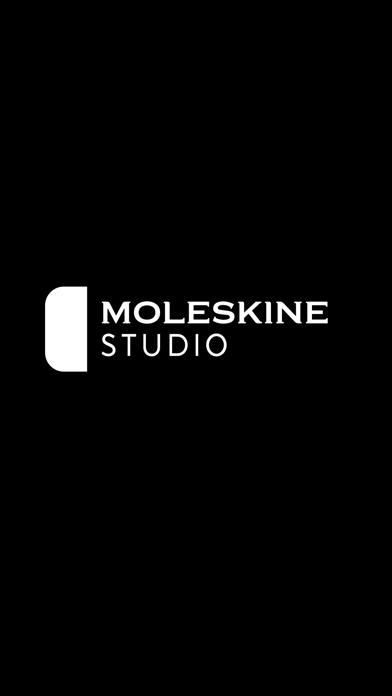 Oh man I love this tool. Looks great. Truly a dream app for a horology nerd like myself. I'm obsessed with clocks and time, partly because I write emails for our business to an international audience, and partly because I am a Gallifreyan time lord and its in my two-heart beating blood. God I love that jiggly animated overlap blob. The Moleskine team TRULY knows how to delight with charming and functional aesthetics. In a world full of hideous design, these touches are deeply appreciated. Who doesn't love beautiful, functional things? That's Moleskine's gig, really, and they shine here. Anyway, Overlap gives a beautiful visual representation of my email launch windows. I switch between this and The Clock (also an amazing time control app) and am satisfied. I have a vew suggestions for the team that would make this app THAT much more functional. Can there be another way to color code cities? I'm a HUGE adherent to VISUALS: I've been told human beings process visual/color data 60,000 times faster than text data. While I can't verify that fact, practically speaking I know I am much more functionally nimble when my brain isn't microbogged with the microfriction of scanning for the action text (in this case, city name). I scan at about a 300 wpm speed, and the picoseconds count. Speed is everything: you know how web engineers optimize for page speed, becuase every milisecond matters between a visitor staying and leaving? You may never see a visitor again, even if it's the exact thig the visitor needs, because they were too impatient to wait 29 -waitforit- MILLIseconds. That's 0.029 of a second! It's the same here. Color coding. Visuals. They're important. An aesthetically pleasing city colorcode = amazing. I trust the M team to do it, bc their exquisite design sense. Ok, and after all that soapboxing, I completely forgot the other points I had. In all, its a marvelous app. So download it.
By lionlight

Can't believe how bad this is

I tried adding the following locations' timezone, and none of them worked: Bengaluru Bangalore Hyderabad New Delhi India The only thing I could find that actually was allowed was this: Mumbai I can't fathom how they think it's a good idea to be so restrictive in what you can enter into the search box when trying to add a new timezone. It literally just ignores keystrokes if it's not in its (apparently tiny) list of cities.
By iTunesZombie

I can't type in the cities I want to add because not all of the keys on my Mac work? UX doesn't seem to work as a desktop app.
By Cynar Midori

Typical Moleskin App! 5 stars and useful. Looks great and works well for a new app. Thank you for making this available.
By Maui Kid

It won’t open. Deleted and reloaded 3 times on IPad Pro and IPhone 11 Pro. Latest IOS. NO DICE Apple, you may want to check apps out before offering them. Free means nothing if it only generates aggravation.
By Dennis3386

App Store tells me I can't use latest version ?

When I go to download, App Store tells me I need "OS X 13.0 or later" unless I want to run the "older version". But my Mac is running 10.15 Catalina!
By Allston-Tollcross

I think this is a beta version, there are very little options in preferences: for instance I would like to be able to change the color of the time pop-ups, their size and why not be able to add gradient and color code. It gave me hope when I authorized it to connect to my calendar but then nothing happened. Its a great start but very very basic.
By T2007

Works perfectly for me -- thanks for sharing it

Very nice, especially with the demise of TimeScroller (RIP Dashboard).
By find-the-joy

Looks great, but not easy