Gettysburg Story Tour dramatically and accurately tells the epic story of Lincoln, Lee, Meade, Chamberlain, Hancock, Longstreet and more. You experience the emotionally moving story upon the exact ground where events changed the course of history. You will experience Gettysburg — a unique, timeless American place—as never before. If you let it, this land will speak to you. Now let’s go! Gettysburg Story Tour is available on the HereStory tour app. The simple and easy-to-use app guides you around Gettysburg National Military Park. The tour covers all 3 days of the battle and Abraham Lincoln’s Gettysburg Address. Beginning at the Gettysburg National Military Park Visitor Center, short, medium and full tour options range from 2 to 3 hours with up to 14 stops along the approximately 20-mile route. Visitors do not need to exit their vehicle, but it is highly recommended at several tour stops. Users with a redeemable code please download HereStory app from App Store to access the tour. Renowned actor Stephen Lang - best known as George Pickett in Gettysburg, Stonewall Jackson in Gods & Generals, and Col. Quaritch in James Cameron’s Avatar – powerfully performs this dramatic telling of America’s bloodiest battle and Lincoln's nation-changing speech. The tour is created by Jake Boritt, producer of The Gettysburg Story companion documentary broadcast nationally on Public Television and now available on video from Apple TV. The Gettysburg Story is based on the works of renowned Civil War historian Dr. Gabor Boritt, founder of the Civil War Institute at Gettysburg College and author of over a dozen books on the Civil War and Abraham Lincoln. Top-selling auto tour at Gettysburg National Military Park Visitor Center & Museum bookstore since 2013. Flexible audio tour options Short, Medium & Full versions range from 2 to 3 hours. GPS guided in comfort, control and safety of your own car. Stop by stop follows National Park battlefield auto tour route. Works offline. Experience Gettysburg from the comfort and control of your own car at your own pace. Includes Abraham Lincoln’s Gettysburg Address at Soldiers’ National Cemetery + General Lee statue, Little Round Top and Pickett’s Charge. “A thrilling experience. The whole battle comes alive in telling detail and superb overview. I can't recommend it enough.” KEN BURNS, Filmmaker “Brings the hallowed ground of Gettysburg alive like no other audio tour. Brilliant and moving.” DORIS KEARNS GOODWIN, Historian Narrated by acclaimed actor Stephen Lang (George Pickett in Gettysburg, Stonewall Jackson in Gods & Generals and Colonel Quaritch in Avatar) Companion tour to Public Television documentary film available on Apple TV and home video. Stunning visual tour of Gettysburg battlefield from maker Jake Boritt. Based on works of Dr. Gabor Boritt, PhD., renowned Civil War & Lincoln historian. Founder of the Civil War Institute at Gettysburg College. Author or editor of 18 books including The Gettysburg Gospel. 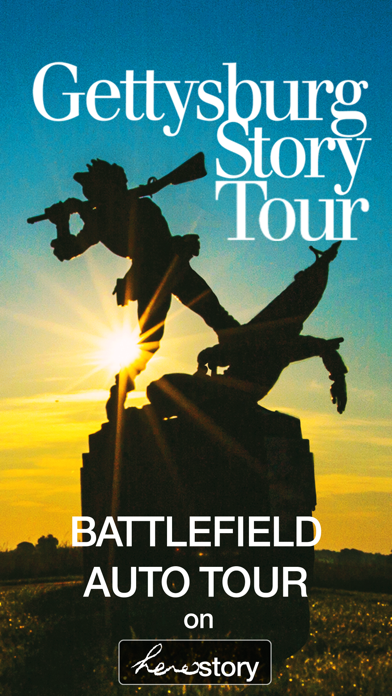 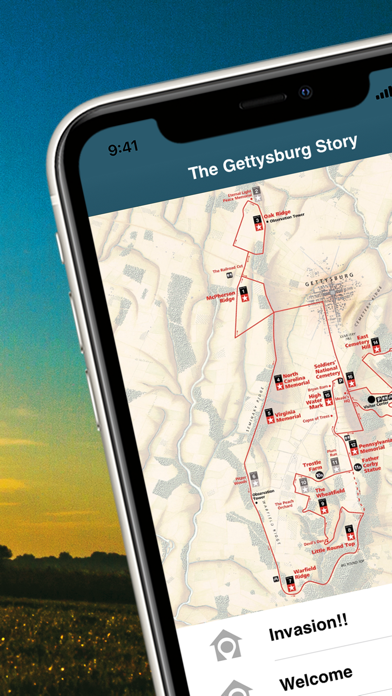 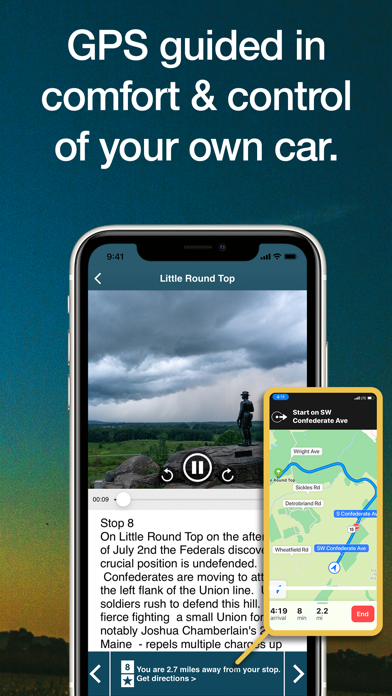 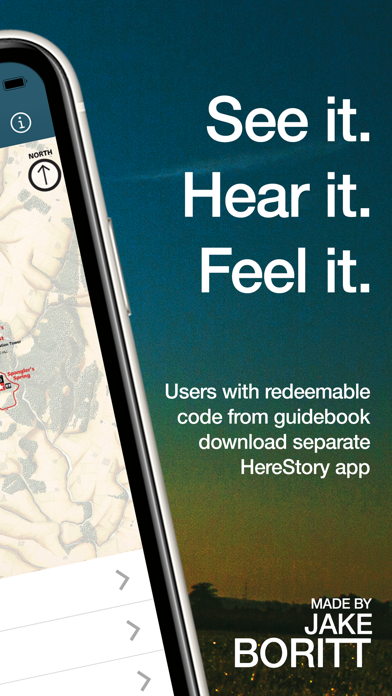 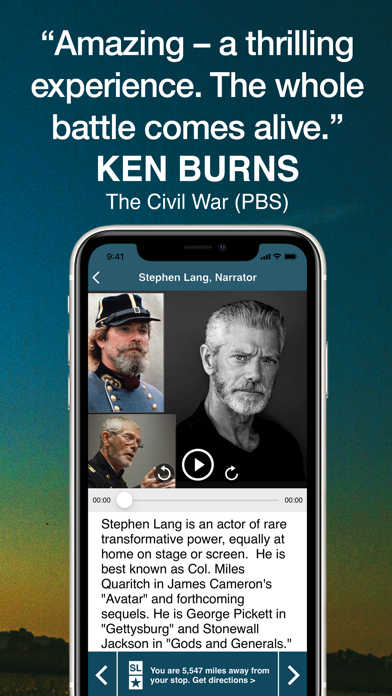 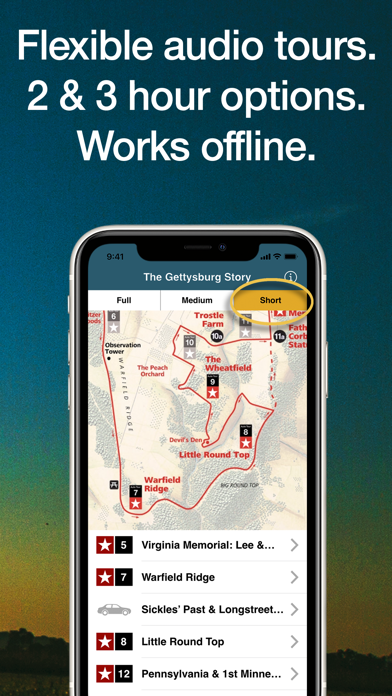 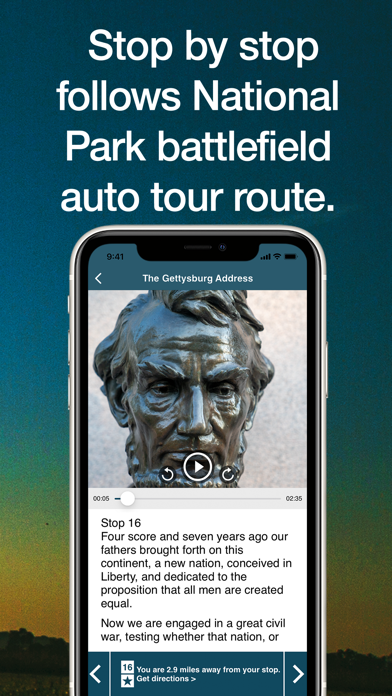 It was great & very informative, until #8. After that, right up until #16, there was no information, no audio at all. It was a useless, pay for app. Try the other Gettysburg app. It lasts until the end.
By Onepiper

We were taking the “short” tour because we were short on time, and after the first three stops the content stopped playing and there was no way to fix it. It was incredibly frustrating given that we were already in a hurry and then wasted the $9.99 on the app.
By jackandsadie

This app was not easy to use. Every time we tried to use the navigation to get to the next stop on the tour, the audio would shut off so, you’re supposed to listen to the audio between stops, but the app doesn’t allow you to listen and get driving directions at the same time. Also, any time you want to look at the list of stops or the map within the app, the audio would stop. When you reopened to the same location, to continue listening, it would restart at the beginning of that section. It was very frustrating! We finally gave up, and just used the free map that we received at the visitors center. What a waste of money.
By Anna the best banana

Very informative, 2nd half of tour will not download.
By sdghbjhdvhh

From the moment I downloaded the app, it proved worthless. The only audio file available is the introduction. After that...nothing. No narration available for any of the stops. The map and direction functions performed well, which is basically just a way if saying I paid $10 for Google Maps (which I already had). A complete waste of money.
By MFS1979

Need a gps blue dot on the map for where you are on the map as you drive around! :)
By Zsoter_bolt

Unequivocally amazing. 2-3 hours for the tour is way too short. Maybe it’s me being sentimental but I only got through to “little round top” in three hours. The weather was iffy but every stop was instructional and educational. I learned so much more than what I thought. There were some “misty” times along the route because of the desire of the union and confederates loosing so many for a cause and me being there with my oldest’s (17yo) first trip, a LOT of emotion. As for the app it took three times to get it to go because It had to download (update) 36 files. Some of the negative reviews this could have been the problem [not a normal download]. The app worked flawlessly, even when I stopped and restarted along the route. I returned to Maine to relisten and relive the moments and there were no issues. I can’t wait to do it again with my youngest.
By SOPO Wizard

Great app! Even for “locals”

This app was a pleasant surprise. We live a half hour from Gettysburg but have never done a “tour”. We did the long version and it was great. Synced with my maps on an iPhone and took us effortlessly through the battlefield. We learned so much and really enjoyed it on a beautiful Saturday
By Mistjewel

Initially the app was fine. About 6 stops in there was no audio content. I know it updated when I first opened but that must have failed. No way to get it to update again. Uninstall and re-installed 3-4 times. WiFi and cellular. Would not download more than half way. Really frustrating as we were doing the auto tour today. Wish developers would refund as this is a design and code issue. I had plenty of bandwidth.
By Javabyte