DivTracker is the best dividend tracker which helps you track and visualise your dividend income. Forget adding up your stock dividends manually or checking your statements every day. With DivTracker, you can see your entire portfolio in one place, analyze your dividend income, and view upcoming and estimated dividend payouts. DivTracker also has you covered with the latest news on companies you own shares of. Notifications will be sent to your phone on key dividend events like payment dates. DivTracker will save you countless hours of work when tracking your dividend income portfolio. This app is best for dividend income investors who hold stocks for cash flow. Features: ● View your daily, monthly and annual dividend income. ● Dates and confirmed amounts for your upcoming dividends. ● See your holdings in one place. We support thousands of US equities. ● Track multiple portfolios. ● Notifications about key events. ● See when a stock pays you next. We also give an estimated date and amount if a stock has no confirmed dividends yet. ● Export your dividend payouts to calendar ● If a company has suspended or cut its dividend, we'll show it and adjust your income. ● Easy way to see your monthly dividend distribution. ● Stay up to date with the latest news on your companies. ● Find stocks going ex-dividend soon with the Ex-Dividend Calendar. ● Customize how you want to see your dividend data. ● Offline mode supported. You can access your data even when your device is offline. ● All your data is synced across your devices via iCloud. Dividend Tracker is a tool created by dividend investors for dividend investors. ----------------------------------- If you choose to purchase DivTracker Pro, payment will be charged to your Apple ID account at the confirmation of purchase. Subscription automatically renews unless it is canceled at least 24 hours before the end of the current period. Your account will be charged for renewal within 24 hours prior to the end of the current period. You can manage and cancel your subscriptions by going to your account settings on the App Store after purchase. Current DivTracker Pro subscription price starts at $0.99 USD/month, and one-month and 12-month packages are available. Prices are in U.S. dollars, may vary in countries other than the U.S. and are subject to change without notice. No cancellation of the current subscription is allowed during the active subscription period. If you don’t choose to purchase DivTracker Pro, you can simply continue using DivTracker for free. Privacy Policy: https://divtracker.app/privacy Terms of Use: https://divtracker.app/terms 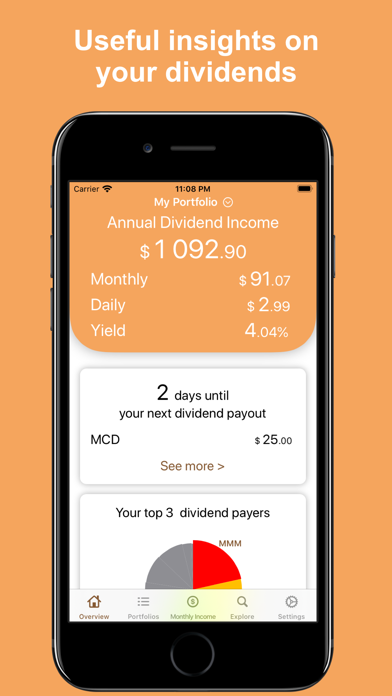 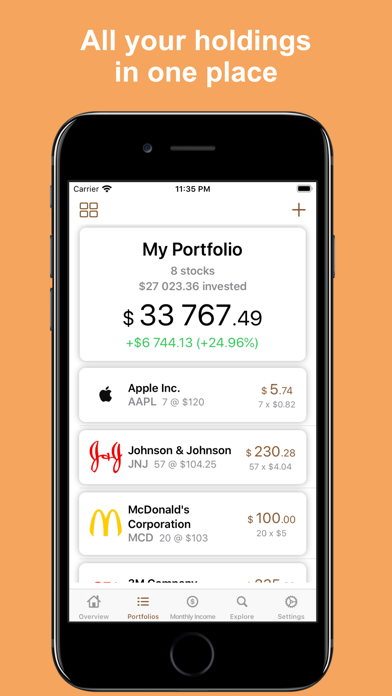 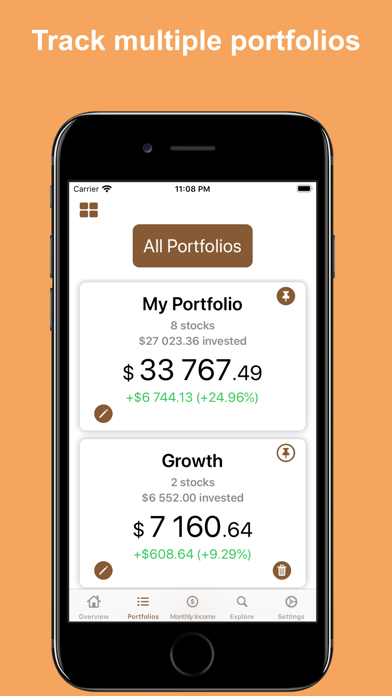 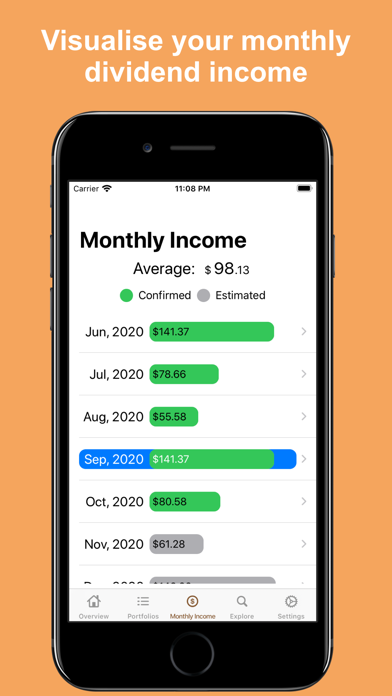 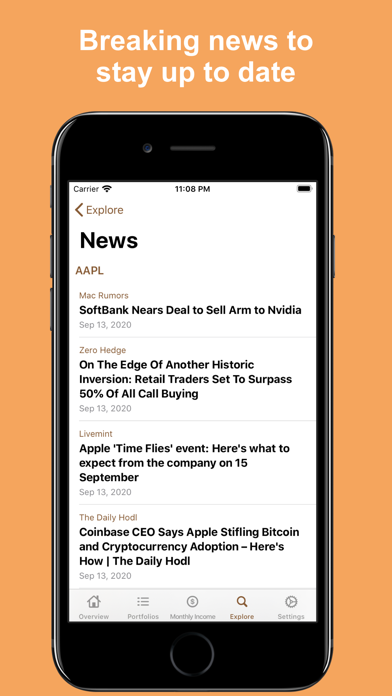 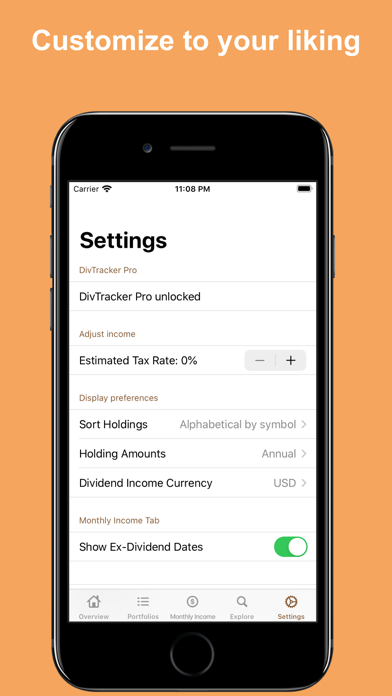 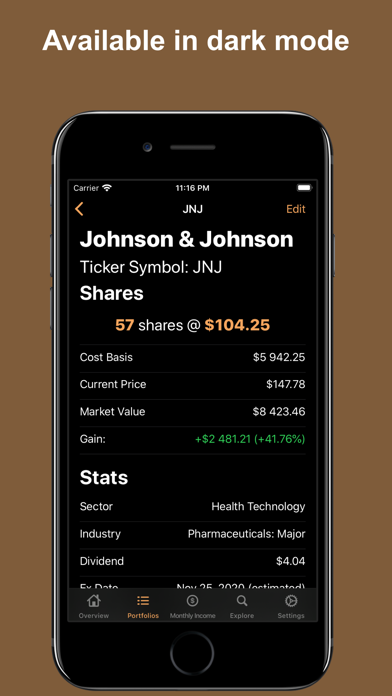 Downloaded this, added 3 stocks, went to add another and comes up with go to pro version, I decline, tried to add another stock and it keeps bringing up change to pro screen, over and over
By trw52

Update with iCloud was a Winner

Thank you so much for updating the app with iCloud syncing support. I was getting real tired of updating three different devices every time I added/deleted an investment. Just in time as I was getting ready to pull the plug on my annual subscription renewal. Now please just make it Universal and take advantage of the screen real estate afforded by iPads and iPad Pros. It looks OK on an iPhone but almost childish on an iPad. Look to DivTracker as an example of a sophisticated and informative user interface.
By Techno-nut

Exactly what I needed

Great app with some possible tweaks.

I love this app. I am somewhat mathematically challenged, so having everything clearly laid out is awesome. I don’t even know if the tweaks I would like are possible, but if so, even better. I have several stocks that regularly hand out special or irregular dividends, yet those do not appear included in my income projections after they have been declared. Also, resetting the growth rates doesn’t stick and is cumbersome to adjust for high-growth stocks. It seems that when I change it, it is back to the default the next time I open the app. But overall, this app is pretty awesome!
By TeriMarieSings

Please correct dividend amount for ENB. You are using the Canadian dollar amounts.
By njeepguy

This app will not let you enter two separate transactions for the same security. Example, on Dec. 1 I bought 10,000 shares of NLY for 8.145. Five days later I bought another 10,000 shares of NLY for 8.467. Instead of recording them as separate transactions, it combines the two. Also, it’s not possible to input the buy date or the settle date.
By TenBengalTigers

This is a fantastic app!

Once you get it set up it’s really quick to review your holdings and see how you did on the day. I install this on my iPad and I also installed on my iPhone and restored purchases to unlock all the features. But there is no ability to sync the data from the iPad app to the IPhone. I can’t enter all the data on two devices.
By Trouble2003

Like the app. Has more news about my stocks than vanguard, E*Trade, and Fidelity combined. Very nice!
By coastal refugee

Pro’s and con’s of this tracker

Pro’s: 1. User friendly with a learning curve 2. Ability to set up multiple portfolios (I.e. Robinhood, M1, Vanguard, etc.) 3. Visual calendar when dividends are estimated or confirmed 4. Auto update on yield % and gain % 5. DRIP feature with forecasting 6. Cost - great value Con’s 1. No auto upload feature, everything must get manually keyed in. 2. The overview tab only shows 1 portfolio, so if you have multiple, it’s not really a comprehensive overview. That’s really annoying and really my #1 issue. Overall, good product but could be improved by offering a comprehensive overview.
By smartyjonesr

Does everything I could ask of a dividend tracker. It would be nice if it could sync my IPad to my IPhone but I bet in time that will be a feature. Nicely done. Would strongly recommend. Update. Terrific Value. Very happy with it.
By Lebcompute