Touchdown in the latest season of Madden and put your All Star football team to the test in the Ultimate NFL experience: Madden NFL 22 Authentic NFL action awaits with the all-new Player Ranks and the return of Player Training! Unlock your players’ maximum potential and upgrade your pro football team on a journey to become the next NFL legend. Upgrade your lineup with a completely reimagined trade system that allows you to mix and match different types of players as you trade up. Quarterback, running back or wide receiver - build a roster that fits your style and reach a higher OVR than ever before. You call the shots! Attain pro football and franchise fame by continuously improving your lineup. Rise to the top of the leaderboard and become a legend! Build the Ultimate Team as the GM and battle your way through the 2021 NFL season to the Ultimate goal- Super Bowl LVII. NFL Superstars and Legends are yours for the taking from top teams like the Pittsburgh Steelers, Green Bay Packers, or the defending champion Tampa Bay Buccaneers. NFL fame awaits - become the next champion in Madden NFL 22. Download the Madden NFL mobile app now and face the fearless new generation of Madden. MADDEN NFL 22 MOBILE FEATURES AUTHENTIC NFL EXPERIENCE - Journey through american football seasons and relive celebrated NFL history - Pro football matchups against top NFL teams - compete for football fame! - NFL Teams and players such as Patrick Mahomes and the Kansas City Chiefs bring real-world competition to mobile NEXT-LEVEL VISUALS - Sports games on mobile have never looked better with an all-new visual overhaul - Across-the-game interface upgrades for a complete new NFL mobile app experience - Football plays brought to life with console-quality graphics unlike any previous Madden game RISE TO FAME - Play football and train to earn points to reach a higher OVR than has ever been seen - Unlock your player’s maximum potential with all-new player ranks! - Complete sets and upgrade your NFL football team to climb to the top of the league BUILD YOUR ULTIMATE TEAM - Football legends are made: Create and customize your own NFL character - Draft fearless new rising stars and NFL Legends from an elite list of quarterback, running back, tight end players & more - General Manager gameplay allows for complete control of your NFL franchise team - Football draft picks await - Assume the role of NFL GM and select your top choice MADDEN MASTERS - Defeat top NFL players and support others along the way to become the real Madden MVP - Co-op assist allows you to help other players and friends rise through the league Download Madden NFL 22 today and experience authentic NFL sports action! --- User Agreement: terms.ea.com Privacy and Cookie Policy: privacy.ea.com Visit help.ea.com for assistance or inquiries. EA may retire online features after 30 days’ notice posted on ea.com/service-updates." Requires acceptance of EA’s Privacy & Cookie Policy and User Agreement. Do Not Sell My Personal Information: https://tos.ea.com/legalapp/WEBPRIVACYCA/US/en/PC/. Requires a persistent Internet connection (network fees may apply). Contains advertisements for EA and its partners. Includes in-game advertising. Collects data through third party analytics technology (see Privacy & Cookie Policy for details). Collects data through third-party ad serving and analytics technology (See Privacy & Cookie Policy for details). Contains direct links to the Internet and social networking sites intended for an audience over 13. The app uses Game Center. Log out of Game Center before installation if you don’t want to share your game play with friends. 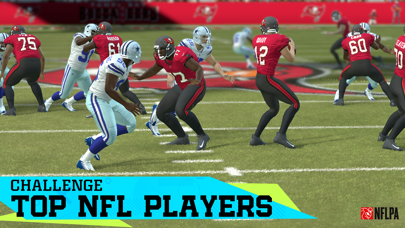 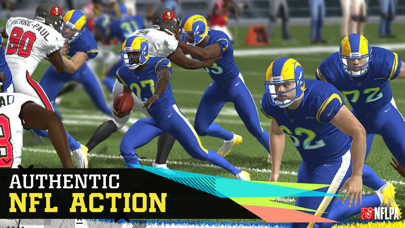 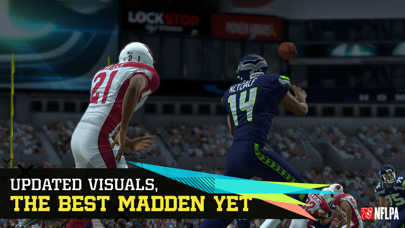 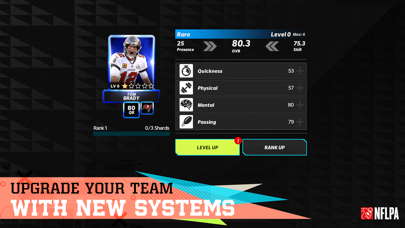 let me use my ut in season mode!

look i just wanna play a basic season with a team of players that i can easily upgrade. what’s the point of the ultimate team if i can’t use it in season mode? a terrible move imo. also bring back the auction house!!
By cookie65399

EA IS THE WORST COMPANY EVER but John madden

Everyone meet the worst company they are making everyone’s game play worst so get your money back they went down hill I respect John madden because he made the good stuff
By Jc's ipad .

The only reason why I say room for improvement is because I came back to this game from 2016-2017. We need the auction house back. That was one of the best things you guys had back then and that would be very nice to have today
By GtPaypaStax

I love the game! The only thing I don’t understand that is when I’m done with the level and I try moving up to the next one it keeps saying I have to edit my line up and I already had done that and it’s still not working. I been trying to figure it out for a while.
By hsbsnembsbgdd

Same thing over and over

I GOT CHEATED IN A GAME AND THE GAME IS BROKEN!!!! I will NEVER play this game AGAIN!!!!!!! THIS SHOULD BE DELETED!!!!! And the took out auction house nice job EA you are still bad at every game you make it’s also PAY TO WIN if you get angry easy DO NOT DOWNLOAD THIS GAME and if you don’t get mad still don’t download also Retro Bowl is WAY better than this garbage can
By jimmy_3

Season mode an how does mm20 look better

Plz add superstar KO and Face of franchise
By dedrehartley

the old madden mobile was easily the prime time version. this game has gone downhill ever since they started adding all this extra trash.
By Archambeau89