Slice and serve delicious sushi in Papa's Sushiria To Go! -- ABOUT THE GAME -- Your tour of Papa Louie's new restaurant goes awry when you break the lucky cat statue outside of the shop. Is this to blame for the restaurant's underwhelming opening day? When Papa Louie leaves on a mission to find a new statue, you're left in charge of Papa's Sushiria, where you need to master the fine art of sushi making! You'll need to cook, season, and spread the rice onto nori and soy paper using the all-in-one "Sushi Square" cooker. Add fillings to the sushi, and roll it up before placing toppings and drizzling sauces across the top. Slice up the sushi into bite-sized pieces, and prepare a delicious Bubble Tea to serve alongside the order before serving it to your hungry customers. Sakura Bay celebrates different holidays throughout the year, and you'll unlock new seasonal ingredients as you go for creating deliciously festive sushi and tea. -- GAME FEATURES -- NEW FEATURES - All of your favorite features from other versions of Papa's restaurants are now available in this "To Go" game, redesigned and reimagined for smaller screens! HOLIDAY FLAVORS - Celebrate the seasons in Sakura Bay with tasty holiday flavors! Your customers will order delectable sushi made with seasonal ingredients. You'll unlock new fillings, soy paper, sauces, toppings, and tea flavors for each holiday of the year, and your customers will love trying these festive flavors in their sushi rolls. SERVE SPECIAL RECIPES - Earn Special Recipes from your customers, and serve them as the Daily Special in the Sushiria! Each Special has a bonus you can earn for serving a prime example of that recipe. Master each special to earn a special prize! CUSTOMIZE YOUR WORKERS - Play as Matt or Clover, or create your own custom character to work in the sushi restaurant! You can also show off your holiday spirit with a massive variety of holiday outfits and clothing for your workers. Choose unique color combinations for each item of clothing, and create your own style with millions of combinations! SPECIAL DELIVERY - Some customers don't want to travel all the way to Sakura Bay for fresh sushi. When you start taking phone orders, customers can call to place their order, and you'll hire a Driver to help take and deliver orders to their homes instead! COLLECT STICKERS - Complete a variety of tasks and achievements while playing to earn colorful Stickers for your collection. Each customer has a set of three favorite Stickers: Earn all three and you'll be rewarded with a brand-new outfit to give to that customer! DECORATE THE SHOP - Customize the Sushiria lobby with themed furniture and decorations for each holiday of the year! Mix and match your favorite styles, or add items that match the current holiday so customers won't mind waiting longer for their food. CLIPPING COUPONS - Missing your favorite customer? Send them a coupon with the help of your friendly mailman, Vincent! Customers love a good deal, and will promptly arrive to order another meal. Coupons are great for completing quests for Stickers and for strategically leveling up customers! DAILY MINI-GAMES - Play Foodini's famous Mini-Games after each workday to earn new furniture for your lobby and new clothing for your workers. -- MORE FEATURES -- - Hands-on sushi shop in the Papa Louie universe - All new controls and gameplay features designed for touchscreens - Multi-task between cooking rice, building and slicing sushi, and making bubble tea - Custom chefs and drivers - 12 separate holidays to unlock, each with more ingredients - Earn and master 40 unique Special Recipes - 90 colorful Stickers to earn for completing tasks - 128 customers to serve with unique orders - Use Stickers to unlock new outfits for your customers - 146 ingredients to unlock 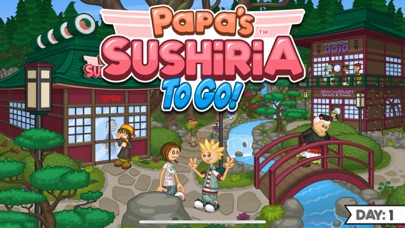 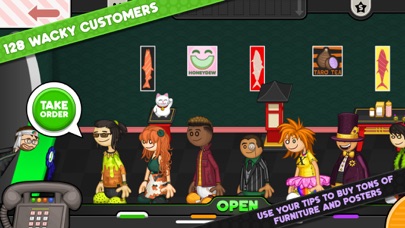 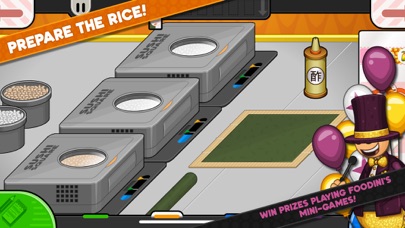 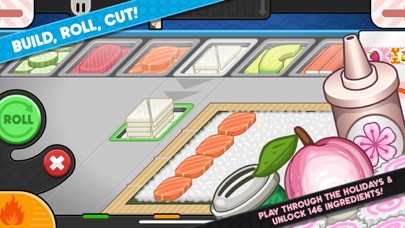 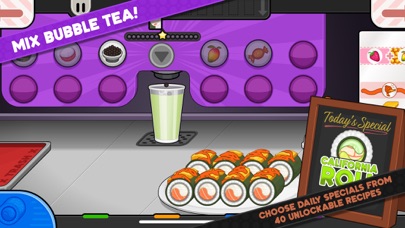 I used to play papa’s games all the time growing up, so I was excited to find they had mobile versions. I had cheesiaria on my last phone and played it all the time with no issues. Recently, I downloaded this game and two others to play on my new phone (which I’ve had for about a year now). The game-play itself is great and if it were based on that alone I would have given it five stars, however the app keeps randomly crashing my phone. It’s happened 4 times now, twice on this game specifically. It will just suddenly stop working. Not only does the music no longer play and none of the in-game functions work, but my screen is completely frozen. I can’t go back to my Home Screen or anything. Every time it happens I get really scared, and the only way I can fix it is to force restart my phone. I’m really hoping for a developer response so I can figure out how to use the apps without this happening.
By emo_ghost_boi

I am a sushi fan and i learned a valuable life lesson with this and that is: Never play any papas games if u r hungry Thanks anyway But like in cluckeria pleeease i want food truck !! And delivery and dining room !!
By babay owl

This game is actually better than I expected. I don’t have very many complaints. Fun game, no ads, and you can play with no WiFi. There’s some things you can buy with money, but they aren’t necessary to play. Some people say that it’s too easy, but I think it’s just fine. However, it can get a little repetitive, but it’s better than most games. And the devs did their best to change it up a little, such as having holidays. One thing about the bubble tea though: I really wish that you could make more than one drink at a time. I also bought the automatic-pourer upgrade for the drinks, thinking that they would pour all of it, but they only poured 1/3 of the process. It’s still helpful, I just wish they would change this. Either that or put a description for it so people know everything that it does before they buy it. Same with the knife upgrade, I thought that it would cut the sushi for you, but it just adds more cutting lines. Other than that the game is really fun and keeps me busy. There’s quite a few different choices so it’s not the same sushi over and over again. That’s why I gave it 5 stars. 👍
By blah_blah_blugh

So easy to play! Amazing!!!

I used to play on school computers when I was younger and even when I was a toddler I’d play on our home computer, me and my siblings would play the pizza game it was amazing then and now . By far The Sushi game is my Number 1 favorite game you’ve made. And this is amazing ^^ super easy and challenging it’s perfect.
By RimixKitty

I absolutely adore the Papa’s games. I’ve been playing them since I found papa’s pizzeria on my schools computer back when I was in the 1st or 2nd grade. This one definitely is my favorite and one of the best flash to phone remakes!!
By Aud.C.T

I’ve always been into these games when they were on the computer! I could never get enough of them and now that they are apps on a phone ! This is just great! I will buy all of these games!!!
By chave - isabel

I do really love this game my goal is to collect every ingredient. But something I would like to see is more of the gumball machines I love the funky flavors and have all available ones in my lobby.
By Shadowolfgamer

Okay so I have downloaded all of the papas to go games and this one is DEFINETLY my favorite. Papas Cheeseria to go is my. 2nd favorite papas game so it was hard debating between this and Cheeseria but I would think this one is so much better. This is the best game I have seen on the app store and I am so thankful that Tony and Matt work so hard on these games for us. Best game ever and thank u Matt and Tony.
By Papa-louie