The COVID-19 app has up-to-date information from trusted sources about the coronavirus disease that is impacting people across the world. It has a screening tool so you can find out what you should do now for yourself or for a loved one. And it gives you access to resources you may need to stay informed. The COVID-19 app is developed in partnership with the Centers for Disease Control and Prevention (CDC), the White House, and the Federal Emergency Management Agency (FEMA). • Use the simple screening tool to determine what you should do if you are concerned about COVID-19. Answer a few questions about symptoms and contact you’ve had with those who might have the disease. And then get a specific, recommended action based on the CDC’s current guidelines, such as practice physical distancing or talk to a doctor. • Save previous screening results for you or for a loved one to refer to at a later date or in conversations with a healthcare provider. • Learn best practices for washing your hands, practicing social distancing, quarantining, monitoring your symptoms, and disinfecting surfaces. • Know that data you provide in the COVID-19 app will not be shared with Apple, the CDC, or anyone without your permission. Data entered will be stored and encrypted on device with a passcode. This app was developed in partnership with CDC. It is not meant as an endorsement of any Apple products. To enable Exposure Notifications, go to the Settings app on your iPhone. 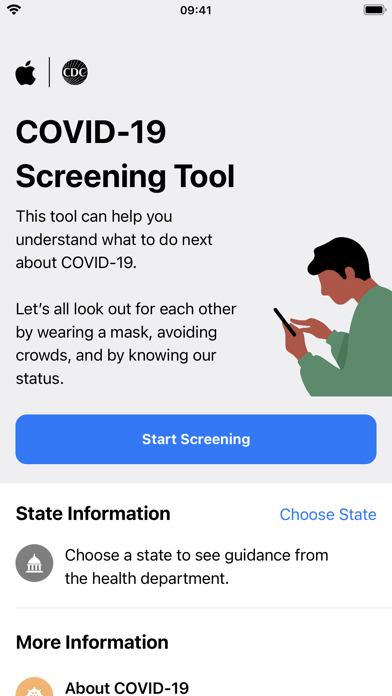 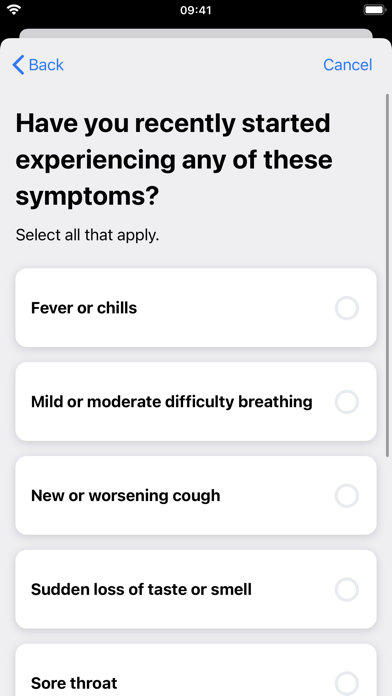 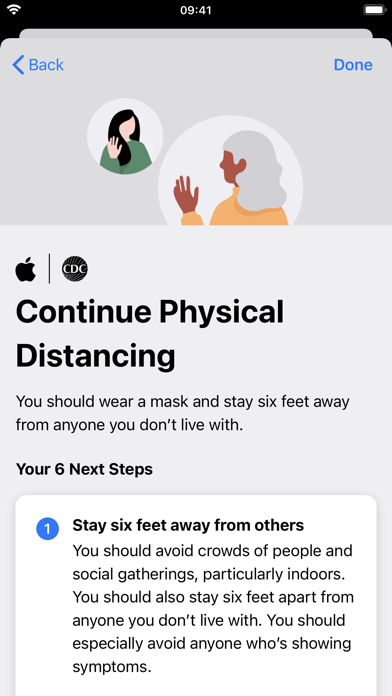 It won’t work past the page to enter your State even if I click “Skip”. Not sure where to notify the app developers. Hopefully just temporary.
By Darlajeanusa

I have been using this for months just to log it I get a sore throat or potential exposure. Last weekend got the closest exposure yet and it freezes at the State info page. No matter what state I choose it won’t let me progress. So the app is completely worthless since I cannot log this event or get any advice on next steps. It should be fixed or taken down from App Store if this is the case.
By Sports pops

Stuck at choosing a state

I just got on the app for screening purposes. I chose DC and would not let me go forward. I also tried using Maryland, same thing.
By Duncan @ Monticello

The screening is useless. It has crashed over and over on the state screen. I can’t skip, it doesn’t load, and I don’t get the recommendation. Frustrating.
By a whitcomb

Doesn’t work past the state screen.

Use for someone else, get to state screen. Can’t advance from there. Done.
By dominogold

If you put anything that wouldn’t be normal like a slight headache with no exposure or anything like that, it’ll still say isolate no matter what. You’d basically have to say no to everything for it to say you’re safe. But then again I’ve done that and it’s said to isolate.
By TheBisonCo

We need contact tracing and citizen science not a FAQ

This app should allow me to see into hot spots of transmission via a heat map. It should also allow me to input data and record my locations so that if I do have symptoms or test positive, I could upload that to the CDC. The fact that this came out and there have been no further updates makes it’s development look like just a CYA move on the part of tech companies like Apple Google and Facebook, when they we named dropped by the President. Not to mention that there are no mentions of it being an aerosolized virus, which the President knew back in Jan. and the CDC just added in Sept. This application could have been something useful like countries have developed to stop community spread or just something better than self guided FAQ and cheap web 1.0 portal. What a complete failure.
By Zaphod the galactic president

I just had surgery and was given a COVID-19 test but the app will not let me report the results.
By Real unhappy 999

As the COVID-19 Incident Commander at a Healthcare System I have been shocked by how other agencies are distorting the best practice recommendations for COVID-19. But I regained hope in humanity’s ability to process written information once again. Apple got it right with this app! I’ve held back from banging my head against the proverbial wall as I’ve talked to Daycare’s, schools, and businesses. I’ve supported one too many organizations who read one or two lines of a multilevel recommendation system creating unnecessary and unhelpful red tape. This app is accurate and helpful. I will recommend this to everyone I know.
By Miffsi