75 HARD is how you win the war with yourself. Are you stuck in life? You feel like no matter what you do, your career, fitness, and relationships just aren’t where you thought they would be? Feel like you are not reaching your full potential? This program is for you. Maybe you’ve tried the fad diets, read the latest trendy self help book, or forked over your hard-earned cash for seminars and courses that promised to teach you the magical secret to success. Yet even after all this, you still fail to make any real progress. Why? Here’s the real secret. YOU are the key. If you haven’t developed the traits of mental toughness needed for success in any area of your life, all these other things will get you nowhere. What are these traits? Confidence. Grit. Fortitude. Self Belief. Self Worth Discipline. Endurance. The unbreakable will to WIN. Over the course of 75 days, this program will start you down the path to becoming a person who is capable of achieving your goals by developing these winning character traits. Is it complicated? No. Is it easy? Definitely not. In fact, it’s probably the hardest thing you’ve ever done. Will it change your life forever? Without a doubt. Are you ready to win the war within yourself? This program requires Zero Compromises. Zero Substitutions. With the 75 Hard app, you can: - Track your daily progress - Set custom reminders for your daily tasks - Take and review your daily progress pics - Share your progress to your Instagram Story - Save journal notes on every day Already started the 75 Hard Program? No problem! We’ve made it easy for you to pick up at your current progress point. We’re working to continuously update the app with new features and updates to provide the best experience for you as you make progress. 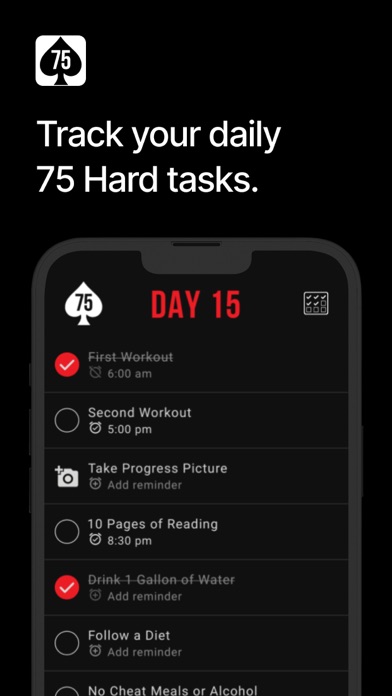 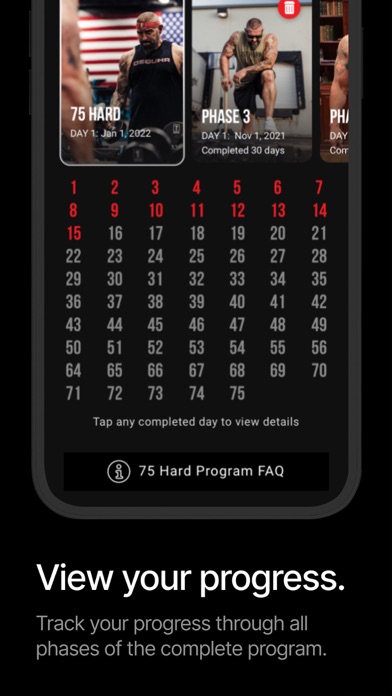 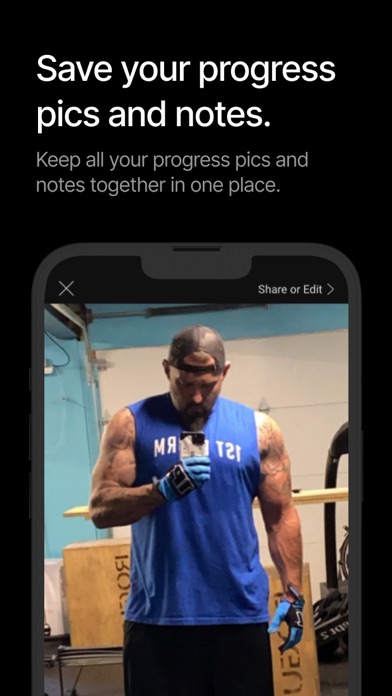 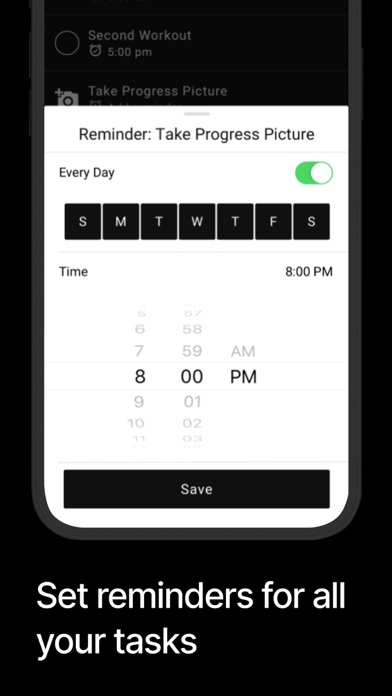 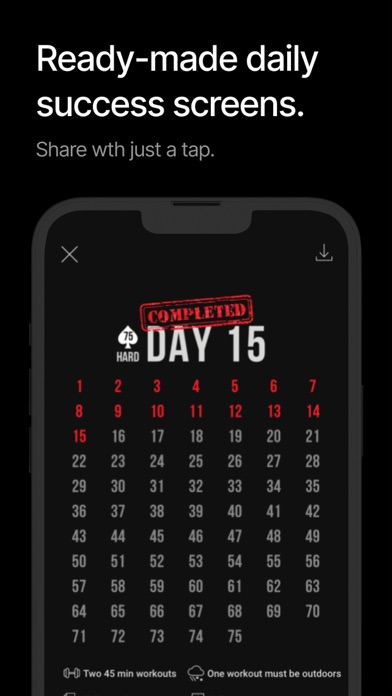 I’m on my second round of the program and the only thing that I wish was different is the amount of characters that you can use in the notes section. If we could get an update on that I would say that the app is flawless.
By Pdx96

Will not stop sending. Spam emails no matter how many times you unsubscribe
By jjoey2020

Keep It Simple Stupid Just like the challenge the app is straightforward, free of fluff and advertisements and easy to navigate. Might not be for everyone and that’s all good, but if you’re looking for the ability to learn self accountability this is a good place to start.
By garygaryquitecontrary

Unable to load picture;as long as I have had this app, not once has it failed nor have I been met with any issue. I am currently in my second year completion of 75 Hard Challenge, in those 2nd year on 17 days into Phase 1. I am unable to access the app let alone upload a progress picture.
By Crystal clear7

Just bought the app yesterday and then the next day the app won’t load. Great way to spend your money.
By Cold Glass of Milk

This is my first day using this app and it crashed and won’t load. Tells me that there is an error and that the error has been reported to the company.
By heyitssteven

75Hard is truly life changing. Use this app to further your success, it’s very well made.
By DiggityBiggity

I was very frustrated with this app due to the app often times malfunctioning and logging the user out which is very inconvenient when you’re trying to tack the days progress. After contacting support them mentioned here is an update to alleviate this. Over the app is very simple but does what is needed. I will keep the five star review unless the glitches reappear.
By Dang Lin wang

What if I never stopped?

Because of this app, I might never stop this cycle in some regards. It’s a change in mental perception, not a fitness plan. Fitness is almost a secondary benchmark and the mental toughness is primary.
By jaydoj

If you are going to do 75 Hard, this app is worth it. You can set reminders and at the end of the day make sure you didn’t miss anything. My favorite feature? It lets you take your progress photos and stores them so they aren’t on your camera roll!
By Tbirdgym