CE5 Contact provides instructions and tools to assist you in making peaceful contact with extraterrestrial civilizations as well as locating others in your area who are interested in making contact. The CE5 protocols were developed by Dr. Steven Greer, one of the world’s foremost authorities on the subject of UFOs, extraterrestrial intelligence and technologies, and initiating peaceful contact with interstellar civilizations. Dr. Greer’s relentless efforts towards the disclosure of classified UFO/ET information have inspired millions of supporters around the world. App features: Official training materials developed by Dr. Greer CE5 Guide, which provides an overview of all topics surrounding CE5 CE5 Process, which walks users step-by-step through all aspects of initiating CE5 Built-in networking functionality for finding and messaging others interested in CE5 Comprehensive equipment list Extensive library with video, images, audio samples, and meditations Notes: For active use of the app outdoors during CE5 work where connectivity may be limited, version 1.5 and later includes offline mode for the CE5 Process section as well as local storage of previously visited pages or played/downloaded content. Certain sections of the app require an active internet connection, including user sign-up / profile editing, networking, and messaging. CE5 Contact replaces the older “ET Contact” app. You may continue to use the older app but new features and updates (including networking, new meditations, sounds, examples, etc.) will be added to CE5 Contact app only. 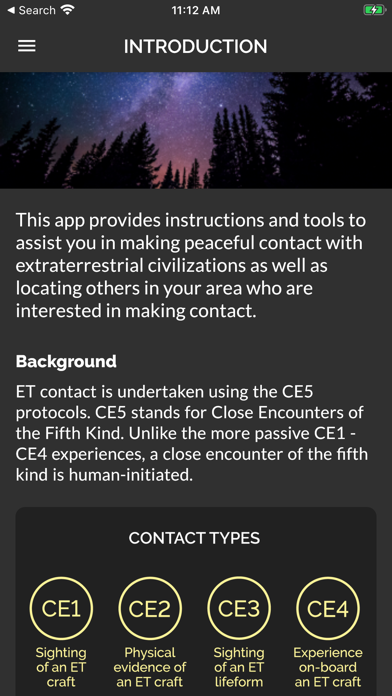 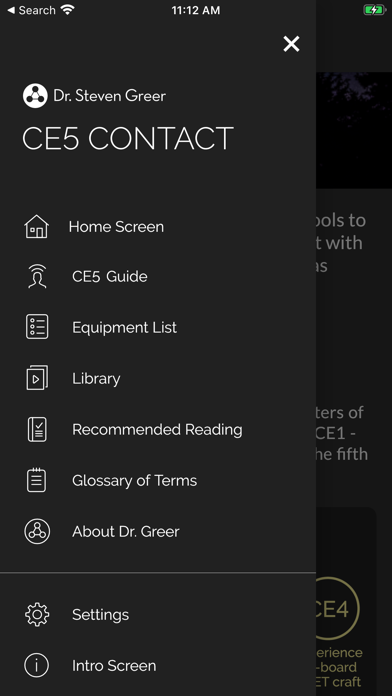 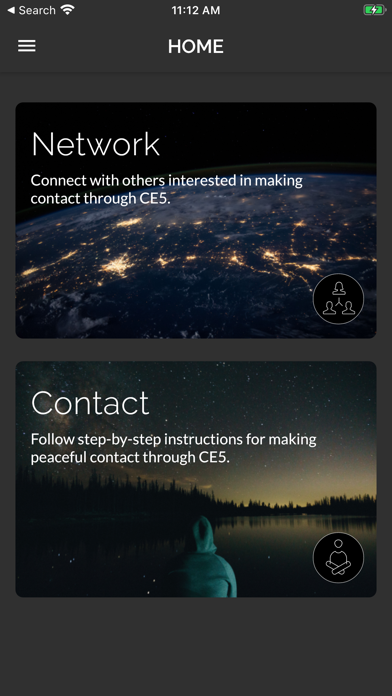 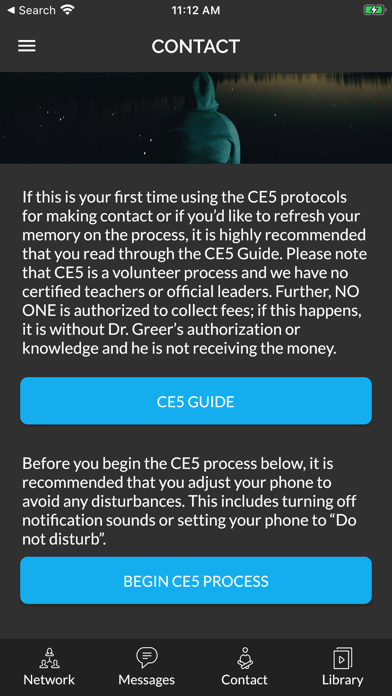 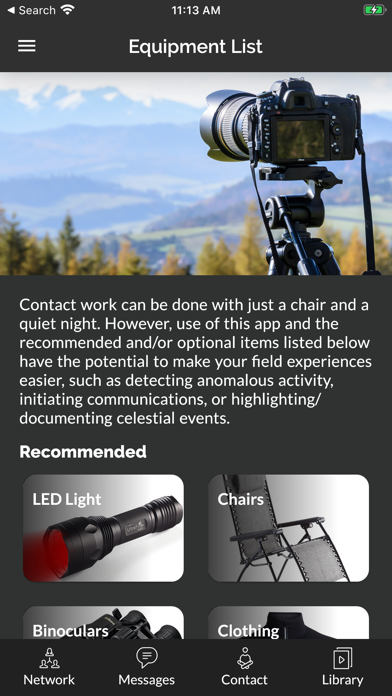 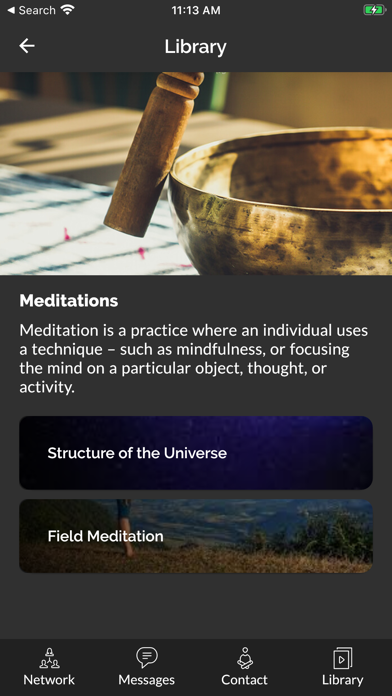 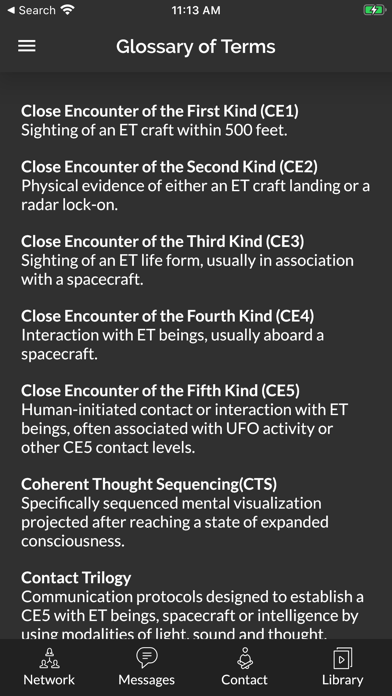 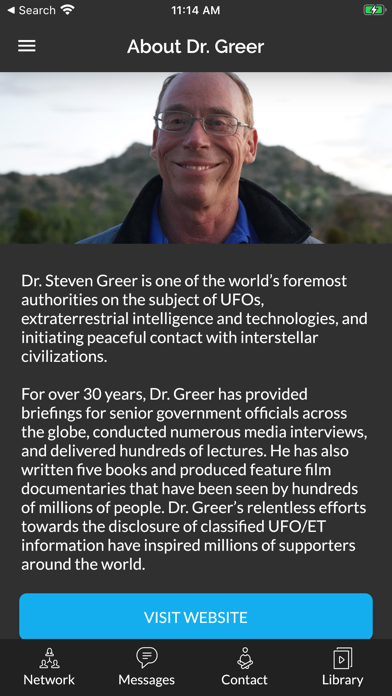 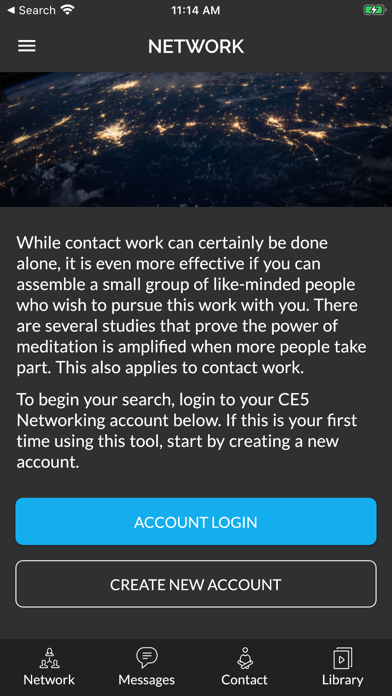 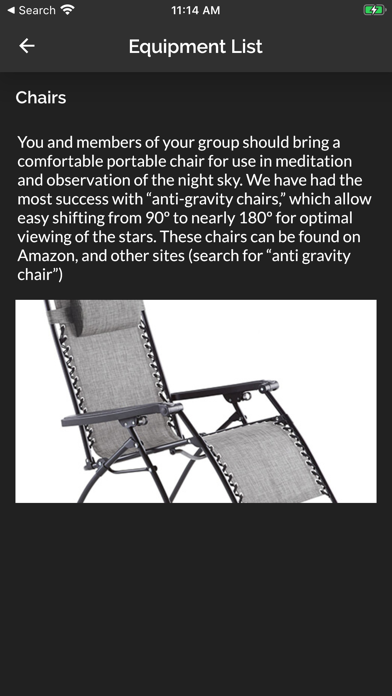 Y know Up load or attach ? Messages n the like

From 1 out of 12 messages reply so far may be team of hopeful two... Like there is so much better stuff to do then? Too busy and how much vacation you taking? I’ll fess up now, hitchhikers guide to Pluto, a chapter before the freeway comes, and Hope the beautiful nice lady driving wants to be in the shot smile ok everybody
By Mikeydingo

It is very good since you feel that you meet your other self, it is excellent. But I want to give a suggestion, they should also have the application in Spanish and other languages, since that way there would be more users who would buy the app.
By Zinsk

i dont trust this app

i was hoping this may phone home to e.t. not analytics to big brother. even just to listen to the meditation music needs internet.
By Steven Estrada

It would be a great app if I could take it into a field with no cell signal and use all the audio features. I wouldn’t mind it taking up several gigabytes. Until then I’ll just have to rip off these recordings and play them manually.
By 1126000119

Not really worth the time.

You might want to wait a bit for a better version of this app before you plop down your hard earned money for this one. No offense to the developer, it does look great and all. Everyone is so psyched from the release of CE5 to get this app and get into the field work only to find that you can’t use it properly unless you are connected to the internet via cellular. I had just recently auditioned this new app outside during some field work and found it to be annoying because you can’t use the CE5 protocol recordings in remote areas, like at a beach. The original app developed years ago for Steven Greer and CSETI was called ET CONTACT, which was FREE and was designed on the premise of using it during field work as an aid. The ET CONTACT app (which is no longer available) made use of some of the built in functions in the iPhone to measure EMR and even had a compass, which was more for convenience than anything else. The most useful part of it was the included recordings of the crop circle tones and the guided meditation, which is very helpful. This new app won’t let you play recordings (or anything else) unless you’re online. This needs to be fixed. One of the things Steven Greer has said in the past about the ET CONTACT app was that it was ‘meant’ to be used in airplane mode, for the specific reason to keep smart phones from affecting the electronic metering devices used during field work. Also for the fact that field work being done in ‘remote’ areas would probably be out of range from any cell service. To support: please fix this as soon as you can. Thank you 8/23/20 - so guys (developers), it’s now the end of August.. When are you guys gonna fix the most important part of this app, which is to use it in the field ‘without’ cellular data on? This is ridiculous.
By jonnykny

So I have had this app for a few months now. One thing that is still not where it needs to be is the networking feature. There are still issues finding people that I KNOW are on the app. Scrolling the map and even the list won’t bring them up. It is not even most user friendly to network and connect with other people. I still can’t find some of the people in our group on it, even when I hover on the map over where they live. This must be fixed and I will rate higher again.
By Selvidge

Being new to CE5 this app was awesome for me to get started. I followed the guidance and I made contact with my new friends immediately! The only thing else you need is to be pure of heart and contact is inevitable!
By 1963peace

Finally an app with all the resources for CE-5

This app has all the information and instructions to start CE5 and allowed me to connect with others nearby. I have used it to formed my own local CE5 research team and we have been meeting weekly with great results! We have also attended a state wide CE5 meetup with over 50+ people. More and more people are starting CE5 everyday!
By k3vin11

After watching the information available I was very excited to purchase this app. Despite it being one of the most expensive being offered I felt it was a good investment. I have been sadly disappointed with it. The only feature that I can not find for myself for free is the community networking portion which is the single most useful part of the app. Sadly it is not very user friendly or very used. It has no community or group feature to use. I had such high hopes and think anyone that purchased this app did as well. Entering this time we need each other and need community support. Of all the apps available this should be offering more than it does. Gravely disappointed when there are notifications of updates that are minimal in change. After having owned it for months and checking frequently to see new content nothing significant has changed. It feels like a rip off.
By southernsibe