Weatherly is a simple and elegant solution for seeing the current weather right from your desktop's menu bar. Customize the menu bar to show current conditions, temperature, "feels like" temperature, or humidity. The app uses your current location to provide incredibly accurate forecasts. An essential app for every Mac owner. Weatherly provides the following features: - Current temperature and weather, based on your location - Hourly and 7-day forecast - Display temperature as either Fahrenheit or Celsius - Automatically start the app on system startup - Frequent updates (every 10 minutes). - Add multiple locations Please note - A subscription is required to access the features of the app. Weatherly is a monthly or yearly subscription-based application which includes a 7-day free trial. These subscriptions support the monthly fees associated with accessing high quality weather data. Please leave a review if you're enjoying the app, thank you! Contact us, please visit: https://glooplabs.com/contact/ Terms of Service, please visit: https://glooplabs.com/terms/ 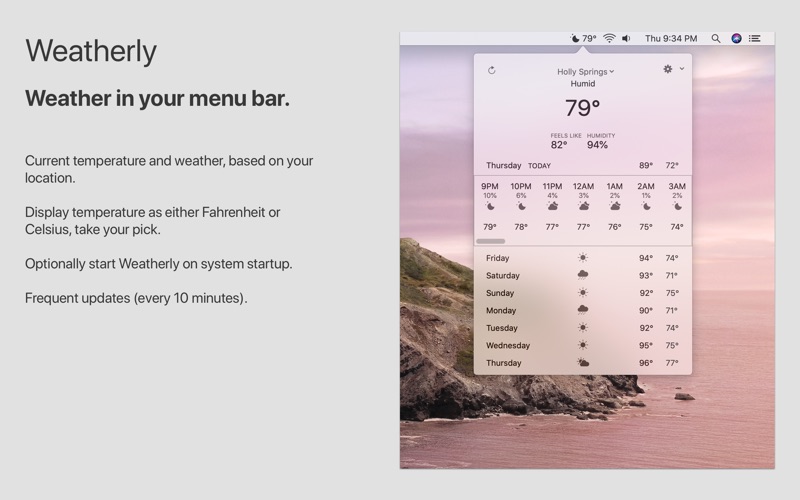 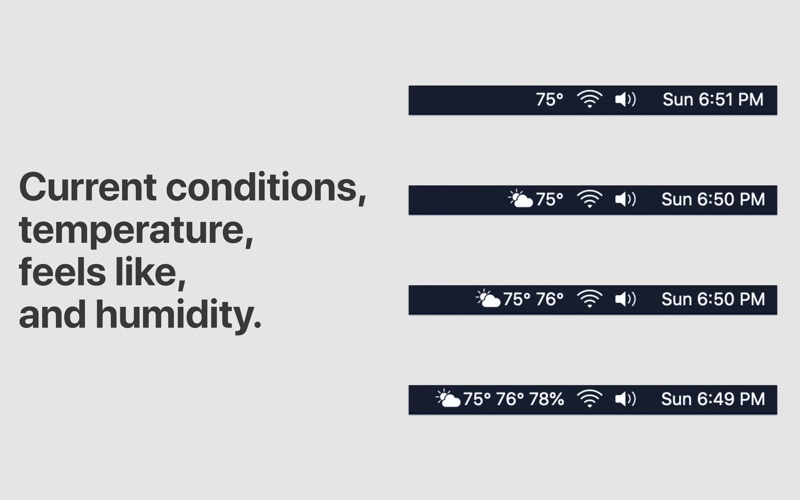 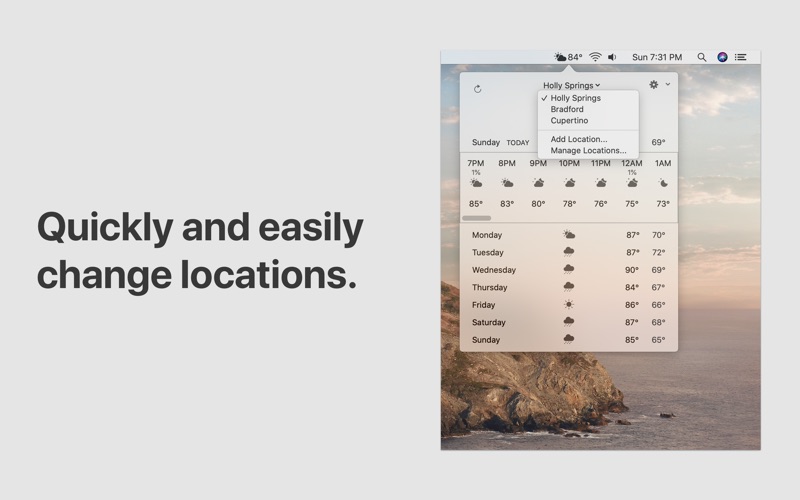 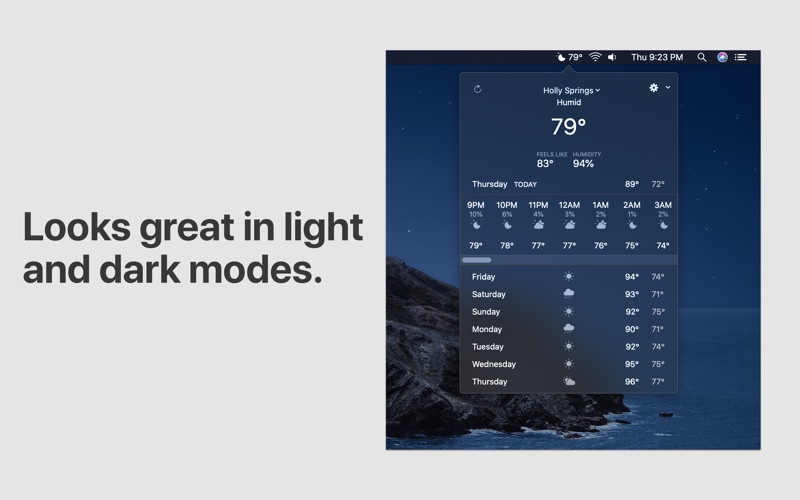 subscription only weather? give me a break

Absolute trash- can only use app if you create a subscription. uninstall immediately.
By woodbr

With very little cost...exactly what I wanted. I've tried a few others with paid subscriptions but just needed the simplicity of looking at my toolbar for basic information.
By elmusa

Developer addressed my concern within a few days. Now I have no issues with Weatherly.
By D. André

This is a One Week Free Trial Only

I don't see it clearly mentioned that this is a one-week free trial only and you will be billed automatically after one-week. You get the notice after downloading the app; I deleted the app immediately.
By ShannonJG

Good app but not perfectg

This is a super convenient way to have a weather report handy on my computer. it says it someohow is connected to Dark Sky, the wonderful app I've used on my phone for a few years. But it is not really up to the quality i get from DArk sky. For instance, i am hearing thunder outside righr now. DArk Sky on my phone says it will start raining in two minutes and it's dark, wind picking up, really sounds about right. But thre Weatherly app on my computer says just parrly cloudy all day - no mention of rain. So it's about half right - oo on temperarure and cloud, but the fact that I have to go close some windows is not suggested. So four stars for pretty good.
By Windchyme50

This app worked for a couple weeks, so I went ahead and bought a subscription. However, now it no longer works. It always says "loading…" and temperatures show up as "--°". I have contacted support and have not received a response. I really liked this app's simplicity, and I wish it did work, but alas, it does not.
By ezekg

It looked like a good app with the option of in-app pruchases, but that's just a bait and switch. The app only works with a $$$ subscription. Total garbage, and I am annoyed they wasted my time by representing as freeware.
By Kenzi Apple

... it doesn't seem to ever refresh. It's Friday, and I'm looking at Wednesday's weather, because that was the last time I restarted the app.
By Rosie Quartz