Dropbox Passwords provides secure password storage and syncs your passwords with all your devices. It autofills usernames and passwords so you can instantly sign in to websites and apps—all while keeping your data secure. You can easily create and store unique, secure account passwords as you sign up on new apps and websites. Features: • Sign in to apps and websites with one click • Store passwords as you sign in to apps and websites • Access your passwords from anywhere with automatic syncing to all your devices Never get locked out of your accounts again. This new password manager from Dropbox helps you sign in to your favorite e-commerce, streaming, and banking sites and apps quickly and securely. Passwords secures your credentials with zero-knowledge encryption, so your passwords are only accessible to you and not Dropbox. This extra layer of password security safeguards your logins and helps keep hackers out. Dropbox is trusted by more than 14 million paid users—let Passwords become your go-to iPhone and iPad password manager. Get peace of mind with the backing of a trusted leader in secure cloud solutions. Terms of Service: https://www.dropbox.com/terms Privacy Policy: https://www.dropbox.com/privacy 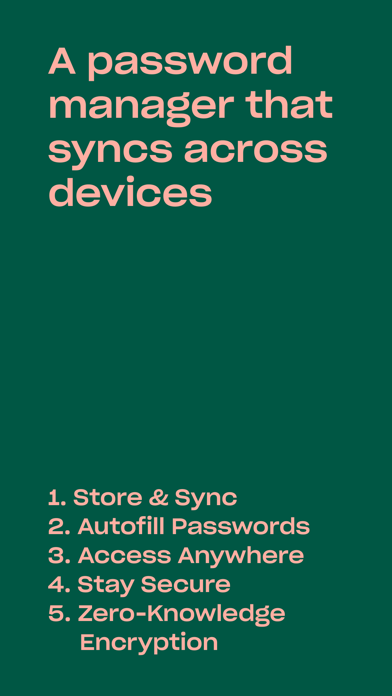 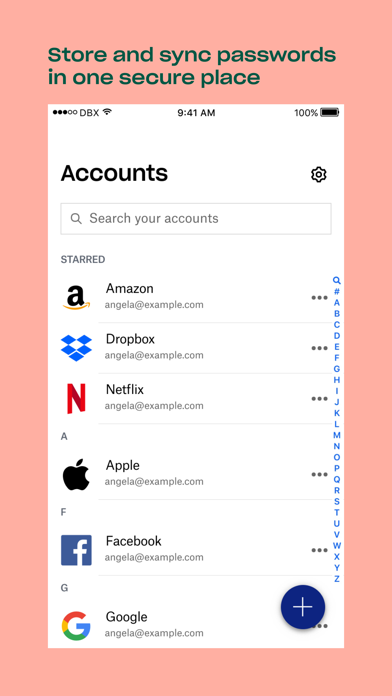 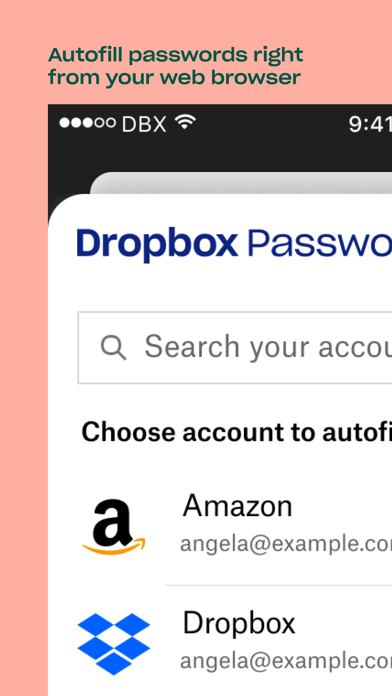 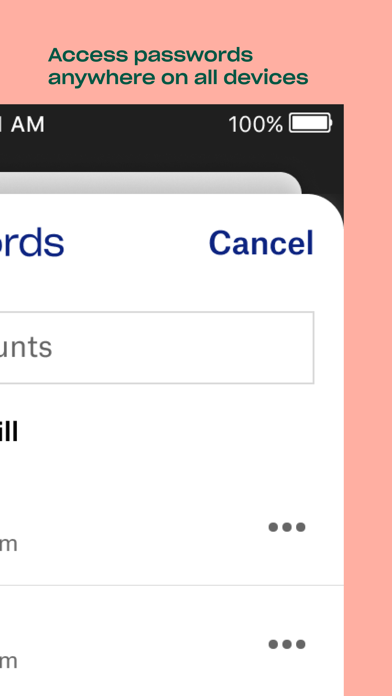 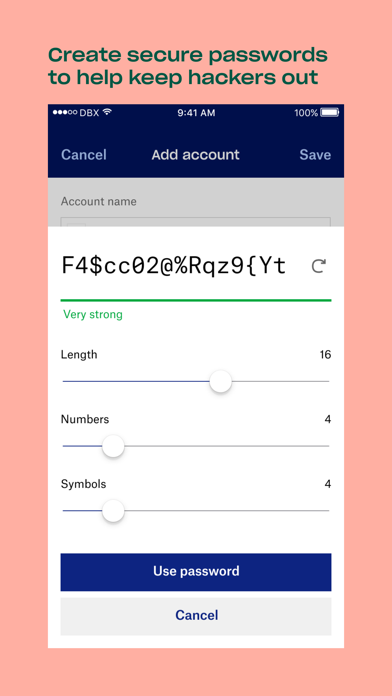 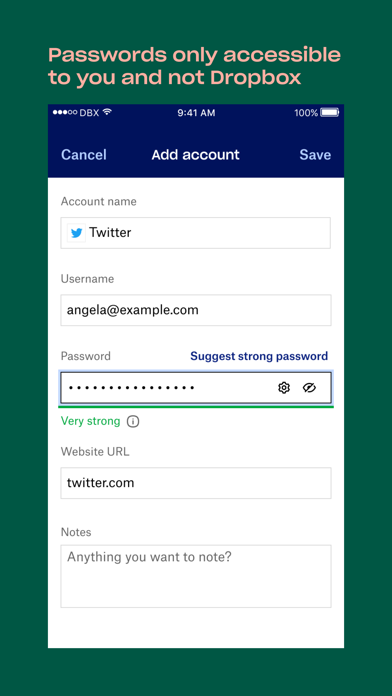 Am I doing something wrong?

I really want to use the Dropbox Password Manager since I’m a paid user of Dropbox, but I can’t get past the setup on my ipad. I’ve followed the “4 steps” to setup as indicated in the email I got from Dropbox, but it switches me to their Safari on Mac app, and it says it’s not compatible with my device. When I go directly to the Ipad password manager app, it won’t let me go through setup because the only option I have is that “I’ll connect later” I feel like I’m in an endless loop to nowhere. Deleting this app because it does absolutely nothing
By SH87624

I’ve had Dropbox since they first launched their 2gb free service back in something like 2010. I’ve been a loyal fan since day 1. When they launched passwords I immediately made the switch and every day the switching costs grow with my regret in using what feels like an abandoned platform. Still no iPad app so I’m using the iPhone version on my IPad and it won’t even sync correctly to my phone and desktop. Oftentimes passwords I add or change on my iPad never show up elsewhere. I’m disappointed in a company I’ve trusted for over a decade. Do better.
By Spearhartt

Unable to set up unless I already have this app installed

The logic to get this going is flawed, seems to install it I need to either reset my account, which I don’t want to do at this time or have a device that has Dropbox passwords already installed, seeing that this is my first attempt to install this, I don’t already have it installed. Spent time on chat with support and got nowhere with them… only option is to leave a bad review and hope that someone from the product team will do something to fix this issue.
By QEDMethods

I have a Dropbox Professional account. I setup this app on my tablet and it installed without any issues. However, when I’m logging into an app I have to go to “Passwords” twice. Once for my username/email and again for the password Furthermore, I’m not able to login to this app on my iPhone. It says it is sending a code to my other device (my tablet), but I never receive it. I tried using my recovery words twice without success. I’ve been using “Secure Safe” for years with no problem.
By UnhappyOne231

It’s ironic that a password manager offered by Dropbox has trouble syncing. Three stars because I get it for free with my Dropbox subscription, but otherwise the app is a bit disappointing.
By mxdmmt

I like the simplicity of Dropbox Passwords, but the app does have an annoying issue. Frequently when I open the app, it is completely unresponsive. It won’t respond to any input. I have to force close the app (flick app up from the app switcher) and launch it again to make it responsive. A native app for the iPad would be nice to have as well.
By Schmeilzy

I pay for full Dropbox subscription and wanted to try their pw manager. However, it’s all glitchy when opening it for the day and I have to terminate the app and open again at least twice. There’s not many options for categorizing and auto-login doesn’t work. If this persists, I’d probably switch to 1password or Lastpass.
By KGV89

All your passwords together in ONE completely safe secure trustworthy place. Today passwords are a must for every website and they have to be changed seemingly at the whim of every website. My password book ... What a mess, with old passwords crossed out and new ones scribbled in the margins and then scratched out again. Craziness. Dropbox has taken a sensible, clean, easy approach and solved what for me, is the biggest problem on the internet.
By $$kgplayer$$

This might be a good app, I don’t know. I haven’t been able to try it yet because I cannot get the app to work. The first time I downloaded it, the app opened okay, and I was able to link the app to my computer. Then the app froze. I tried rebooting my iPad. I tried removing and reloading the app. Nothing worked. After I downloaded the app the second time, I couldn’t even get the app to open. Thinking the problems might be limited to the iPad version, I downloaded the password app onto my Android phone. Again, the app immediately froze, although I could temporarily unfreeze it by doing a force quit. I was able to access the password feature on my computer and got a glimpse of the password manager setup, which looks fine. If Dropbox can get it to work, this would be a useful app to have!
By SavannahVisitor

as a dropbox customer i thought i would save some money and give their password manager a try. that was a mistake. constant bugs and the inability to properly sync across multiple devices have made this a huge headache. not worth it. save yourself the effort and use a legitimate password manager.
By nbivs