ProDex accompanies you in Pokémon games, from versions Red and Blue to Brilliant Diamond and Shining Pearl on the Nintendo Switch! Pokémon, moves, TM's, items, locations and abilities are no longer secrets to you, and the advanced team builder will prepare you for the most epic battles. THE BEST POKÉDEX Enjoy useful features: - Team Builder - Dark Mode - Advanced type chart - Quick descriptions - Powerful filters - available soon - And a lot more USEFUL IN-DEPTH INFORMATION Access to information on: - Pokémon - Capture - Evolutions - Moves - TM's - Abilities - Natures - Items - Locations - Move tutors This app is an unofficial app and is NOT affiliated, endorsed or supported by Nintendo, GAME FREAK or The Pokémon company in any way. Some images used in this app are copyrighted and are supported under fair use. Some images used in this app are copyrighted and belong to Nintendo, GAME FREAK or The Pokémon Company. They are used in this app in accordance with the laws of Fair Use, for the United States of America, or of the intellectual property code, for France. Pokémon and Pokémon character names are trademarks of Nintendo. No copyright infringement intended. Pokémon © 2002-2018 Pokémon. © 1995-2018 Nintendo/Creatures Inc./GAME FREAK inc. 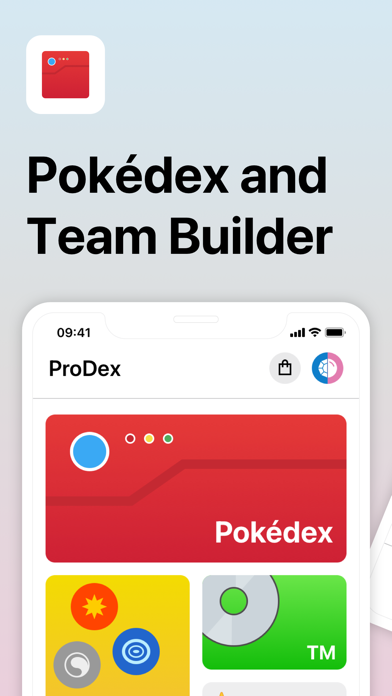 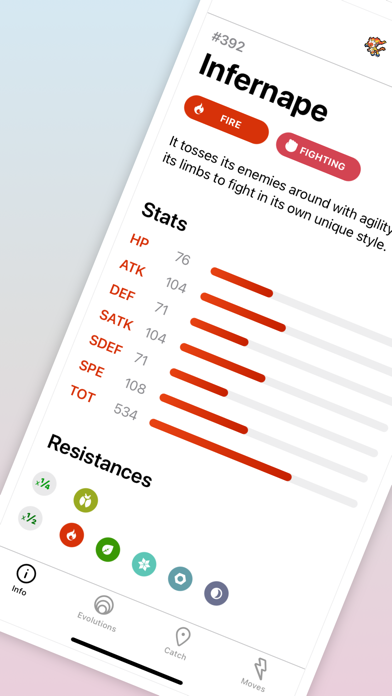 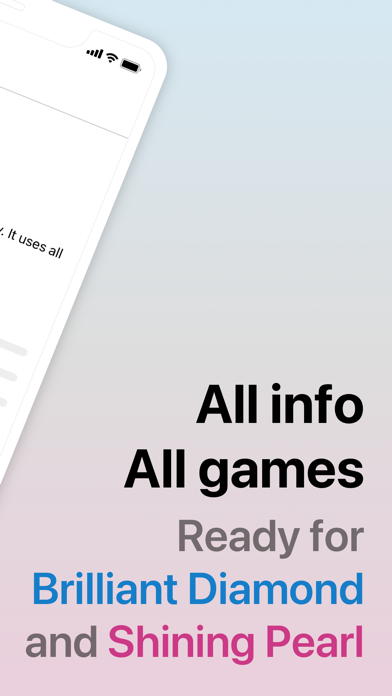 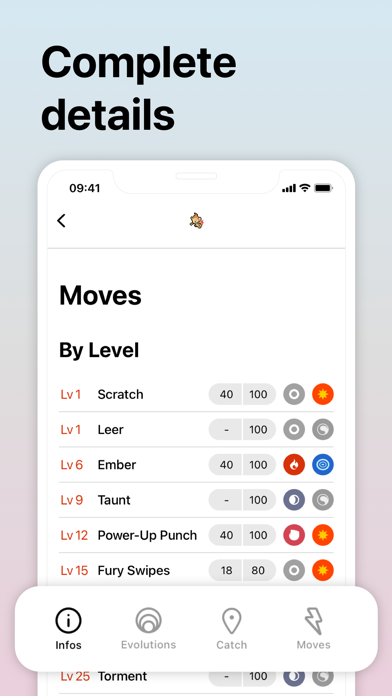 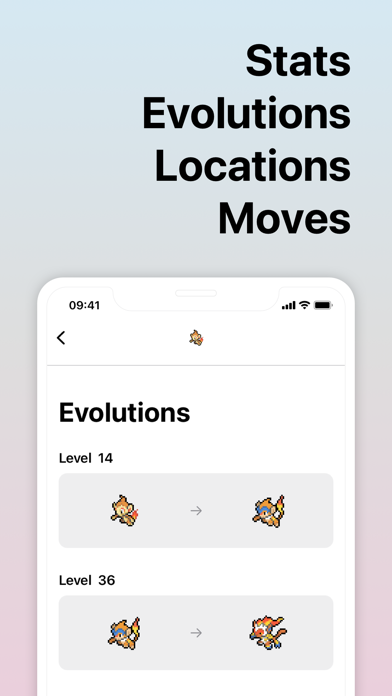 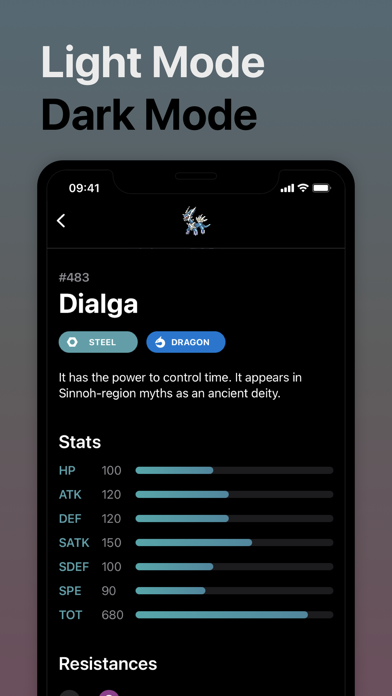 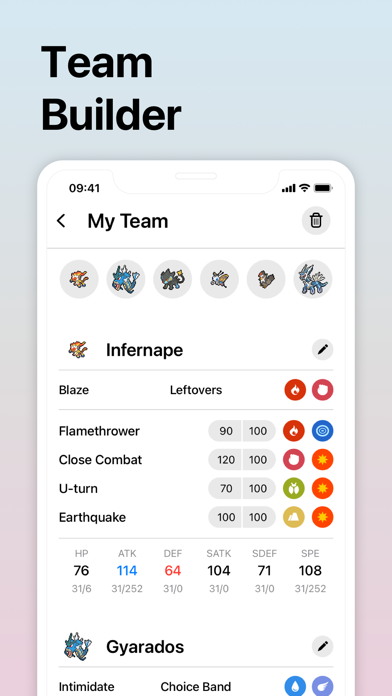 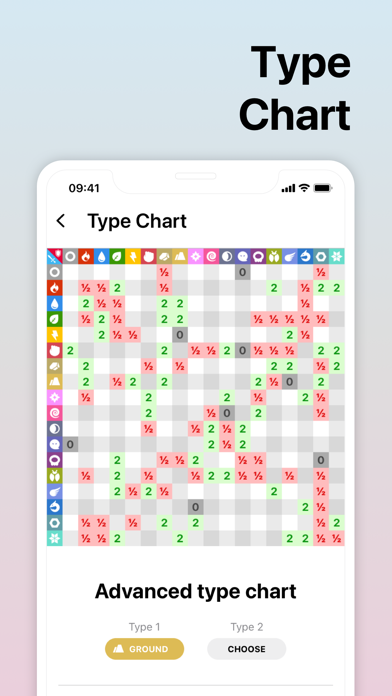 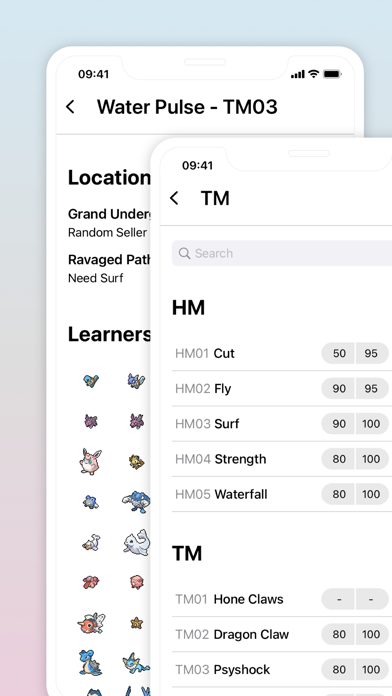 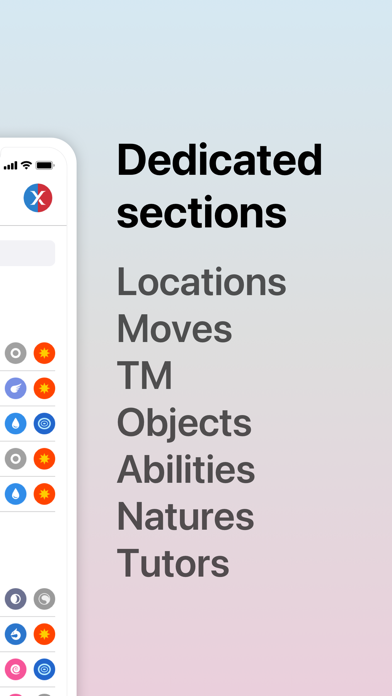 Hope add following things 1, for egg moves, list whom I can mate with to get the egg move 2, info is needed under each move to indicate which is direct contact. 3, the limitation each move is not fully described. 4, app languages are binding to system language. Hope I can choose app language without change system language. 5, need to indicate which move has Same-type attack bonus. 6, due to the width of the app. The number of some move is hidden. 7, I can not go back to zero for basic point. 8, app can not lively show the calculated ability value for each Pokémon in the team section Bug 2021 Jan 1, 治愈波动的描述有问题。 2, 定身法的介绍是四回合还是一到八回合没写明白。
By pangeng

Love this app it’s by far the best Pokédex app on the store. And thank you for all the time and effort put into it. I do think it would be beneficial for you guys to add some sort of walkthrough by using pictures in game for those who could use it. Also I would really LOVE to see Pokémon go added to the app displaying available Pokémon, moves, etc. it may not be a console game but it is a Pokémon game played by many. Have you considered adding Pokémon go?
By Jimmywang556

Right now, i am using the app to plan out nuzlocks, and this is how it works for me. I am looking at routs, it tells me where and how to find it pokemon as well as the pokemons odds of spawning, then i easily access the pokemons data and statsand look at evolutions and learn sets, phenomenal, the only thing that i wish was added and would be pretty easy, is gym leaders, it would make nuzlock planning so much better, this app already has a lot, but diff trainer battles would be perfect, also, the 1$ price tag is really cheap, and i know you can find the same stuff on game wikis, but this app does it with such ease that it clearly is worth it. 5/5
By munixi

Great app that could use some minor changes

This is a great app for anyone who want general infomation on pokemon, TMs, and items. My only complaints are that some of the the information incorrect, there should be a feature that prevents you from getting negitive EVs, and the pokedex section should number the pokemon. Other than that, this is a great app.
By Diablo6292

It deleted all of my teams when it updated

After updating the app, I realized that all of my teams had been deleted. All of that work was gone
By Mustard Patrat

The app I would make myself

I was looking for a nice clean pokedex app and was about to set out to make it myself, but this app is exactly what I was looking for. Only thing I’d request is item locations! You go guys!
By gabrielinator

This app used to be amazing. That is until 80% of its features got locked behind a paywall. I’ve seen a lot of Pokédex apps, and this one was the best one since Dexter shut down. But now if I want to build teams, the sole reason I downloaded this app, I have to pay the owners $10. You have to admit that’s scummy. It’s fine to lock some features behind a paywall but don’t update it so almost all of the features are.
By Shan sjekrndhushdnedjhdhdhs

I used it for Sw/Sh a lot and loved it. I don’t mind small ads but it’s too much and doing a quick google search is now more efficient because of this.
By Justafan24

I love the detail and amount of effort put into this it really shows. And I have a lot of fun building several teams as well. I just have one question: When building the teams we can’t select shiny versions of Pokémon. Is that because shiny Pokémon don’t have a sprite version or you just didn’t put it in? Because I would like to make Shiny team builds.
By Hhfxxxghb

It’s a really great app I like the team building and Iv’s is a nice touch. The only problem I find with team building that you can’t customize the Pokémon you put on your team like shiny as well as female or male forms. other than that it’s really good. I do find some spelling mistakes or a move is put in twice but that doesn’t ruin the app at all. Premium is actually worth it and doesn’t feel like a pay wall, it just feels like supporting you with some benefits. This app is so much farther above most poke dex apps.
By a.a adams