The Popular Savings Card that Supports Schools and Students is now available on your iPhone. Over 200,000 cards sold! The Starving Student Card for IOS on the iPhone is a fast and simple platform to HUGE Discounts and Savings all while supporting your local schools. If you like access to Hundreds of Dollars in Free Stuff and BOGO’s (Buy One Get One Free) then this is the APP to download. Your Favorite School Fund Raising Platform is now available in an IOS APP. With over 200,000 Cards sold, Schools and Individual Students use the Starving Student Card as a Fund Raiser platform. Download the APP today and you can donate up to 50% of the proceeds directly to a particular School, or Organization within the School, and even to an individual student. Start your Savings, and Help out your local Schools today! WHAT EXACTLY IS THE STARVING STUDENT CARD? A Premium Paid IOS App with Access to Huge Discounts, Free Food, and Services all donated by businesses to help support Schools, Students, and School Organizations. One Paid Yearly Account only $35 or a Monthly Subscription of $4.99 Premium Paid Features: -Choose Which School, Organization, or Student you want your Payment to support. -Sort through the Free Offers and BOGO’s or Deals by: -Category -Location / Distance -Alphabetical -Business Name -Redeem the offers through the App -Track your Savings through the App With the Official Starving Student Card Paid App you get access to Free Offers and Deals that will save you hundreds of dollars at local businesses and restaurants while helping support your local School or Student of your choice. Up to 50% of proceeds are donated directly to the Students and Schools. Local businesses offer Free Stuff as well as Huge Discounts as a way to help Schools Raise Money. This School and Organization fundraiser started in Southern Utah and is spreading to new states. The Starving Student Card has raised over $750,000 for local Schools, Students, and Organizations. The Starving Student Card is not just used and sold by Elementary and High Schools, we have several participating Universities that also use the Starving Student Card as a means to raise funds for student activities and organizations. Not only do students use the Starving Student Card for fundraising, but they also use the App to take advantage of the Hundreds of Dollars in Savings! We are proud to be one of the number one fundraising methods in the State of Utah and we are expanding into new States. One of the features that make the Starving Student Card so great for school fundraising is that you get to choose which Individual Organization and Student you want to support. Your Starving Student Card Premium membership automatically renews on a Yearly or monthly basis unless auto-renew is turned off at least 24-hours before the end of the current period. You can manage your subscription, cancel or turn off auto-renewal through Account Settings in your iTunes account. You can cancel anytime and there are no refunds for partial months. 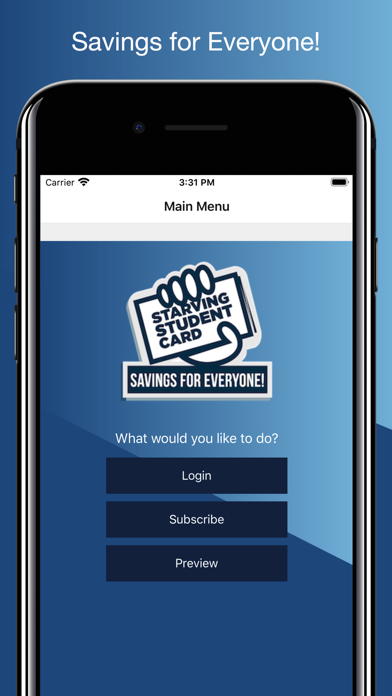 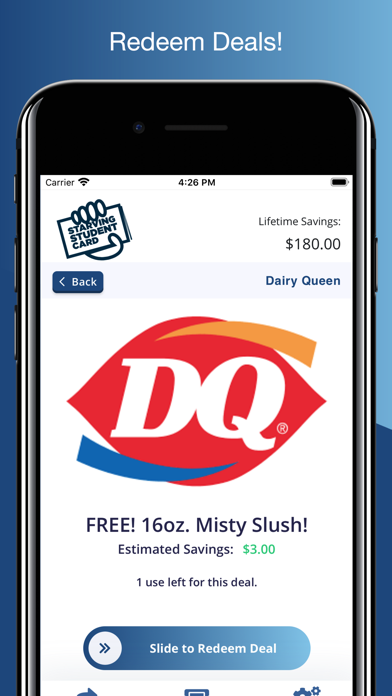 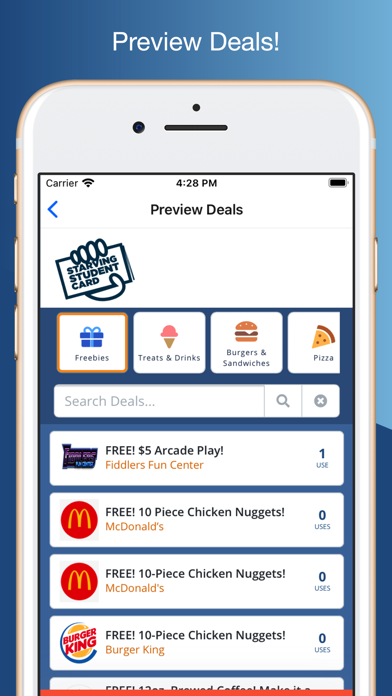 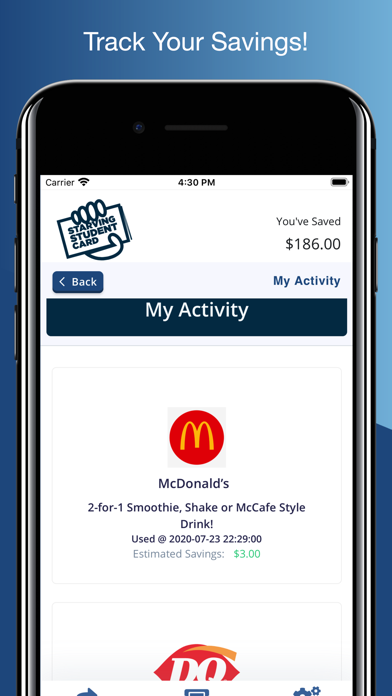 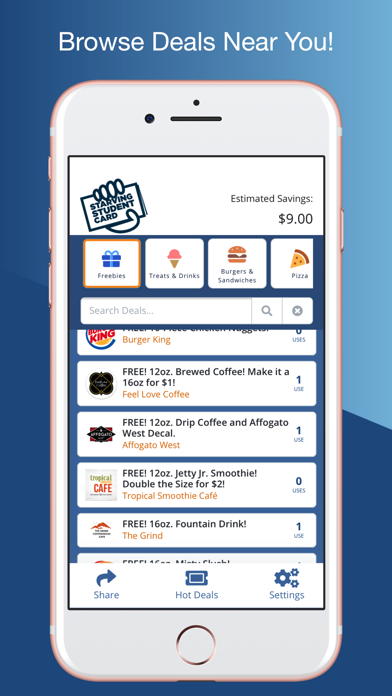 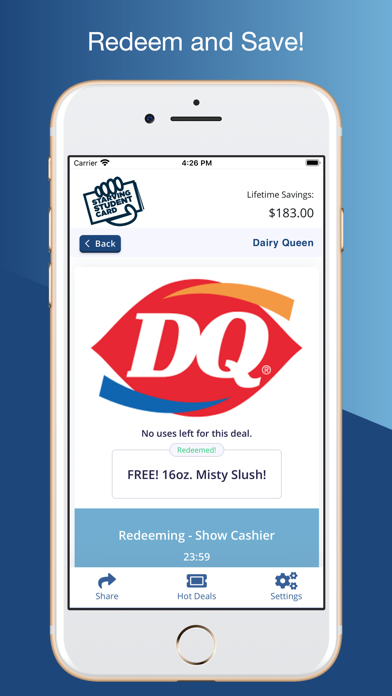 This is great with the flaw that you can’t order online and use the coupons. And since more places don’t even answer the phone the coupons have to be submitted pre order.
By triumphantluck

Honestly, terrible app. I’m not sure who built it but they should be fired. I build iOS apps for a living and I could build this app in a few dedicated weeks and it would work beautifully. The deals are good but that has nothing to do with the app hence a flat 1 star for 0 usability. Big issues: Search doesn’t function as it should No map to look at nearest locations Bugs all over from hooking into webview Onboarding process is BAD I won’t go on. Update: why do I have to login again every time I open the app? Y’all need some serious work done.
By C0J7

The program is great and has tons of really good deals. The app could use a lot of work, though. It makes you log in every time. The “remember me” feature doesn’t work. When reviewing deals, and going back, it takes you to the beginning of the list again. If it weren’t for the bad app I’d give it 5 stars for sure because of the great discounts.
By Gergj84

The entire point of this card is to support students that can barely come by on payments in the first place, so who was the moron that thought it was a good idea to charge $30 a year to use the card at all? If that’s what they’re doing, the only people that can actually afford to use this card are the people that don’t need it.
By ibitch

The app is okay, but I really REALLY wish that the deal would go away after you use it. Like off the list. Because it’s super annoying having to go through all your deals and trying to sort out the ones you’ve already used. Also, I hate the fact that if you click on a deal to, idk, see where the location is, and then you go back, it sends you right to the top again.
By cheating isnt cool

I love the app and the the amount of money it saves me, but no matter what I do it always shows the wrong locations for the restaurants and other places with multiple locations. At first I didn’t think this wouldn’t be a problem but until recently one of the employees was saying if we wanted to use the coupon we would have to drive to the one it said on the app which was thirty minutes away and a free ice cream cone isn’t worth driving thirty minutes. If the location thing was fixed to where I don’t have to argue with employees or maybe even add some fine print at the bottom saying the coupon is valid at all locations. Other than that flaw in the app the app is great.
By and f rnnejsjdb vfbfbgnfjdjs

We love this card! It saves us so much money... it’s even more convenient now that it’s on the phone!
By tshields94

Absolutely L-O-V-E this app! So many amazing deals and discounts... I’ve only used it 3 times and saved almost $25😱 I love how it notifies you when you are close to a business that is on the card, super convenient! 10/10 would recommend.
By LaurenMarie1992

We love the App!

We love the App over the card because we’ll never loose it again! I love that there are new businesses being added often! Yahhh!!! We love the Starving Student Card App!!
By BlueClay7

I bought a subscription and it had me use Apple Pay. So I did and when I went to make an account the only option was to buy another one or have an activation code but was never given a code. Contacted the company a week ago and haven’t heard anything. Wouldn’t recommend using the app. Find someone selling cards.
By Keri6372