ROUVY is a complete and highly-featured indoor cycling software for cyclists and triathletes. The unique platform, with over 4,000 geolocated videos, ensures precise 1:1 simulation of outdoor routes and races by using advanced algorithms and mixed-reality technology. Rouvy’s Augmented Routes combine high-quality, geo-synced video footage with animated 3D riders, for the most realistic road-feel and experience. Key features: - Augmented Routes - Digital Races - Virtual Routes - Unlimited # of virtual or real-ride partners - New design and intuitive UI - User-friendly "one-click" concept - “4K-ready” video quality - New avatars with a custom-fit look The In-App subscription: To be able to use all functionality, you have to purchase the ROUVY subscription (14.99 USD/Monthly) once you will connect the trainer via Bluetooth with the App successfully. 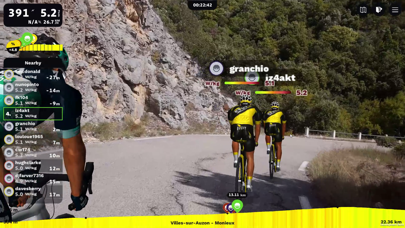 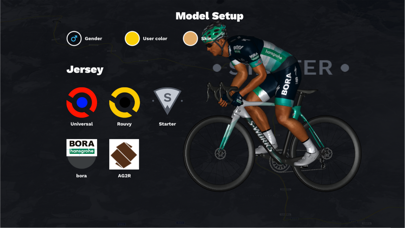 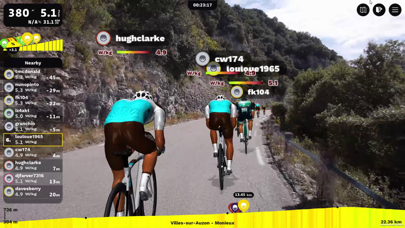 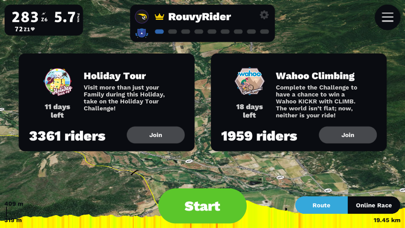 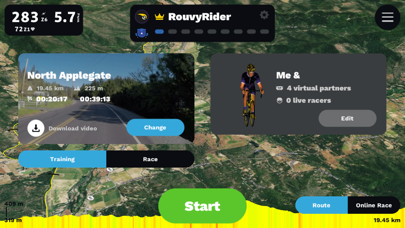 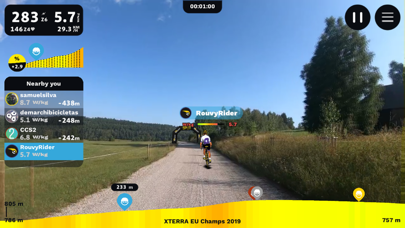 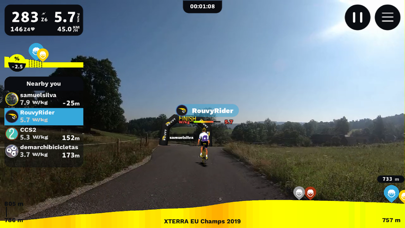 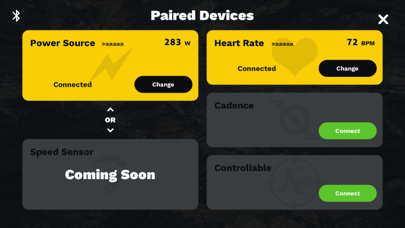 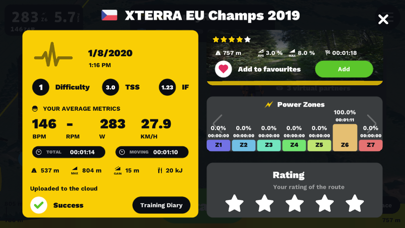 Update to my review

As I have now spent almost 2 weeks with the App, I have learned how to create virtual riding partners who ride just a little faster than me, using Rouvy’s archive of other cyclist routes. I have been adding 30-50 riders so I always have someone nearby to challenge me. I think this app deserves to be viewed on a large screen. It runs best with Apple TV 64. Second choice would be a large screen iPad or computer. Another good choice would be an iPhone linked by HDMI adapter directly to a big screen. The filming and immersive feel would be wasted on just the small screen of a smartphone. And unless you have an ultra fast WiFi network, screen mirroring with ApplePlay or similar mirroring methods is too choppy to maintain the immersive feel. My next project will be to rewire my biking room with a direct Ethernet connection to my AppleTV so I can stream the rides instead of the 5-10 minute WiFi downloads to the Apple TV. I will soon run out of storage on the device and will have to delete earlier rides. My WiFi varies from 30-50 Mbps while my Ethernet runs 10 times faster.
By Radx777

Such a disappointing app. Very counter intuitive and difficult to navigate compared to Rouvy Mobile. You can’t select routes from a challenge and it’s not easy to switch from training to race mode. Fix this app or you will lose subscribers.
By seebeck86

Seems to work well for me?!

Hello. Our group just switched over from Zwift. Rouvy seems to be working quite well for all 5 of us on appleTv. I love getting to “pre-ride” trips all over the world; motivates me to visit some of these places (lol and avoid others, sorry Witchita Falls...)
By Macbones

I love the old ROUVY app. Everything was in one place. Now when I enter a challenge, I have to go over to safari to look it up, find required routes, list those as favorites and then go back to ROUVY ar to ride them and I still don’t know which route is for which challenge when I’m on AR. There were a lot more routes, I could look them up on world map and choose to see a new place in world. Lots of triathlon routes, not just iron man routes. I got AR because I was told the original ROUVY was no longer available. I will finish my subscription and if things don’t improve I will switch to zwift.
By rasie63

Doesn’t support password managers for login, also doesn’t support logging in with Apple, so I can’t get back in after logging out. I can’t believe they expect anyone to pay for an app that you can’t even log into. Also no options to link workouts with other fitness apps!!
By Kp311420

Seems cool. I was able to sign up and log in on my Android phone and my iPhone without issue. I don’t use either during my rides though. When I attempt to log into the App on my Apple TV, I cannot get the App to open the keyboard to enter my log in information. Zwift is still working as are my other Apps which means it has to be the Rouvy AR App. I purchased a year subscription but will be canceling at the end of my trial period if this isn’t fixed by then.
By grizzlsizzl

Save yourself the frustration

I paid for a full year subscription only to have the software stop sync’ing with the server two weeks later. Their technical support is terrible. They take several days to respond and, then, only uselessly like “It should work automatically.” The company did provide a pro-rated refund but all the time I spent trying to get the software to work and waiting for them to respond to my pleas for help won’t be coming back.
By Beans and rice is nice

This doesn’t recognize any of my Ant+ devices including my CycleOps Powerbeam Pro. Rouvy Workouts on the other hand, recognizes everything. I’m using a Wahoo Ant+ dongle with my iPad.
By ChadGW

Save your frustration. This app never works. When one tries to do a workout it starts downloading AR data and then goes into a lock cycle of endless spinning to download. The data is never downloaded and when I try to cancel and go somewhere else, no commands will work on my entire tablet. Have to reboot tablet and delete app. What an utter pile of garbage.
By Hikes Fast

I just connected via Bluetooth to a new Schwinn IC4 spin bike. I realize that it is not fully compatible with this model but the info I have says the speed is supposed to at least sync up. When I look at the Bluetooth connection in the settings. It looks like it is reading the speed correctly from the bike, but that doesn’t translate at all to the video. I can’t get over 10mph in the video even when my bike says I’m going 25 mph. I really want to like this app but this not very fun if I can only ride at 5 mph.
By hjjkkkk