-- ABOUT THE GAME -- Papa's Cheeseria is kicking off its grand opening with a special performance by the high-energy band, Scarlett and the Shakers! Unfortunately the concert is canceled when all of the music gear is stolen, and you'll need to pick up a job to afford buying new instruments for the band. Thankfully Papa Louie has the perfect solution for you: He's putting you in charge of making grilled cheese sandwiches in his newest restaurant! You'll need to prepare sandwiches with delicious breads, melty cheeses, and a wide array of toppings and sauces for a gourmet grilled cheese. Cook and flip the sandwiches to grill them just right, and finish your customers' orders with a heaping order of fresh french fries covered in their favorite sauces and toppings. The town of Toastwood will celebrate different holidays throughout the year, and you'll unlock new festive ingredients as you go to serve up delicious seasonal sandwiches. -- GAME FEATURES -- NEW FEATURES - All of your favorite features from other versions of Papa's restaurants are now available in this "To Go" game, redesigned and reimagined for smaller screens! HOLIDAY FLAVORS - Celebrate the seasons in Toastwood with tasty holiday flavors! Your customers will order sandwiches stacked high with seasonal ingredients. You'll unlock new breads, cheeses, toppings, and sauces for each holiday of the year, and your customers will love trying these festive flavors. This new version adds holiday toppings and sauces for fries as well! SERVE SPECIAL RECIPES - Earn Special Recipes from your customers, and serve them as the Daily Special in the Cheeseria! Each Special has a bonus you can earn for serving a prime example of that recipe. Master each special to earn a special prize! CUSTOMIZE YOUR WORKERS - Play as Scarlett or Rudy, or create your own custom character to join the band and work in the sandwich shop! You can also show off your holiday spirit with a massive variety of holiday outfits and clothing for your workers. Choose unique color combinations for each item of clothing, and create your own style with millions of combinations! SPECIAL DELIVERY - Some customers don't want to come all the way to Toastwood to grab some grilled cheese. When you start taking phone orders, customers can call to place their order, and you'll hire a Driver to help take and deliver orders to their homes instead! COLLECT STICKERS - Complete a variety of tasks and achievements while playing to earn colorful Stickers for your collection. Each customer has a set of three favorite Stickers: Earn all three and you'll be rewarded with a brand-new outfit to give to that customer! DECORATE THE SHOP - Customize the Cheeseria lobby with themed furniture and decorations for each holiday of the year! Mix and match your favorite styles, or add items that match the current holiday so customers won't mind waiting longer for their food. CLIPPING COUPONS - Missing your favorite customer? Send them a coupon with the help of your friendly mailman, Vincent! Customers love a good deal, and will promptly arrive to order another meal. Coupons are great for completing quests for Stickers and for strategically leveling up customers! DAILY MINI-GAMES - Play Foodini's famous Mini-Games after each workday to earn new furniture for your lobby and new clothing for your workers. -- MORE FEATURES -- - Hands-on sandwich shop in the Papa Louie universe - All new controls and gameplay features designed for touchscreens - Multi-task between building, grilling, and preparing french fries - Custom chefs and drivers - 12 separate holidays to unlock, each with more ingredients - Earn and master 40 unique Special Recipes - 90 colorful Stickers to earn for completing tasks - 124 customers to serve with unique orders - Use Stickers to unlock new outfits for your customers - 125 ingredients to unlock 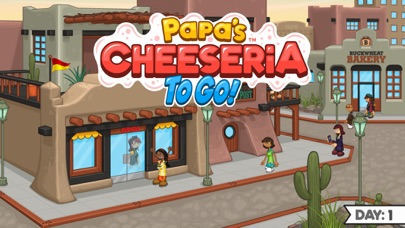 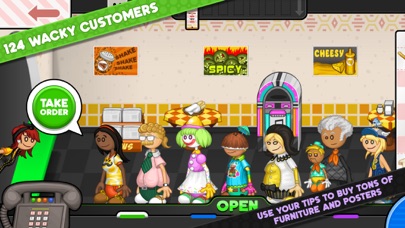 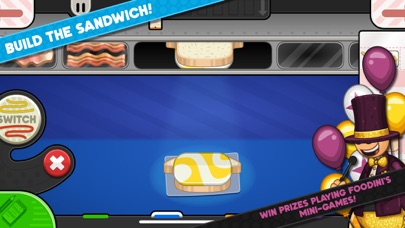 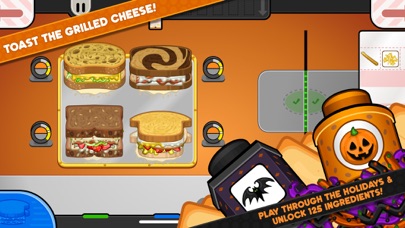 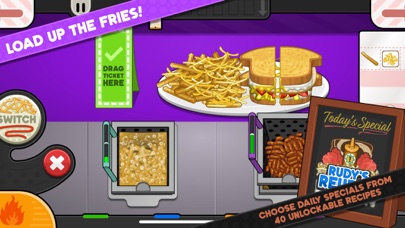 I have never had such good games

Love this game!! But it would be nice to have more items to upgrade in the kitchen! Game gets kinda repetitive after awhile!
By Bthorne

I suspected that scores weren’t matching with the performance of the game. I recently finished Sushiria and I didn’t expect inaccuracy, because that game is great. But I purposely messed up the cook time on an “angry” customer in Cheeseria, and it gave me a perfect score for it. Safe to say, kinda bummed the accuracy is off. Makes you not wanna try to play.
By smonro3

Amazing Game! One problem though...

I love this game a lot and I’ve been enjoying it so far! Papa’s Cheeseria is one of my more favorited Papa Louie games that Flipline Studios has to offer. Though, I have one problem... sometimes when I’m on the Build Station, the cheese selection at the top will freeze after I throw away one sandwich that I messed up the cheese on. This is a small problem and you may not read this, but I wanted to talk about it anyway. Btw, I’m on Rank 49!
By FlapjackDX

U should make more

I’ve played the different Papa’s games since I was younger. They’ve always been very fun and this app doesn’t disappoint, however I wish there was an option to play this one vertically which would be easier on a mobile device. Please continue making these games because they’re so fun!
By emmaliese c

when i was little i would play these games nonstop and i was addicted! i haven’t been able to find a game i wouldn’t get bored by, but i remembered how fun these were so i bought one! i’m so addicted and obsessed, i now understand how i was stuck playing for hours on end!!! i loooovveeeee itt! ❤️
By eveliaaaaaaaa

I have been a fan of papa’s games since I began playing them on a computer. They are lighthearted and fun. The game itself, as well as the artwork, are made really well. There isn’t a massive paywall in front of the game like other cooking games. The initial price of the app gives you access to everything. These games have done wonders for my anxiety and are great for relieving stress. They have done a great job of being able to attract a wide audience (it isn’t just for kids, I played these games in between my study sessions for college). Please support these developers so they can make more games like this.
By random nctzen

Hands down the best papas game. I’ve completed the game on my laptop and now I’m close to completing it on my phone! I love it so much and can’t wait to get more!
By suziqt100