Learn to play the guitar at your own pace with step-by-step tutorials, made by world-class music teachers, and receive feedback from the app while you learn to play your favorite songs! No experience needed | For all ages | Works with any guitar --- Make your musical dreams come true --- • Play chords & songs straight away! • Learn step by step with high-quality video lessons • Receive feedback from the app and know when you are playing correctly or need guidance • Learn all the necessary techniques to play the songs you love: - Guitar fundamentals - Read and play tabs - Playing chords - Chord switching - Strumming techniques - Invaluable tips and tricks for playing correctly - Technique boosting exercises • Track your progress • Learn to tune your guitar (professional tuner included!) • Receive fast support from our musicians • Have fun and quickly improve your skills --- How Simply Guitar works --- • Place your device (iPhone) in front of you and play; the app will immediately recognize what you are playing • Get feedback on your playing to quickly learn and improve your guitar skills • Discover the magic of music with fun songs and complete lessons to start sounding like a pro • New songs and lessons are added regularly. --- Good to know --- Simply Guitar is developed by JoyTunes, creators of award-winning apps Simply Piano and Piano Maestro. JoyTunes are experts in creating educational and fun music apps for learning to play quickly and easily. Recommended and used by tens of thousands of music teachers worldwide with over 1 million songs learned every week. Awards & Recognition: - “Editors' Choice” by Apple - SF Music Tech Summit Startup Innovators Challenge Winner - Best Tool for Beginners, NAMM - EMI Innovation Challenge Award --- Contact --- Have questions, feedback or suggestions? Reach out to us at guitar@joytunes.com Enjoy playing! Privacy policy: http://www.joytunes.com/privacy Terms of use: http://www.joytunes.com/terms 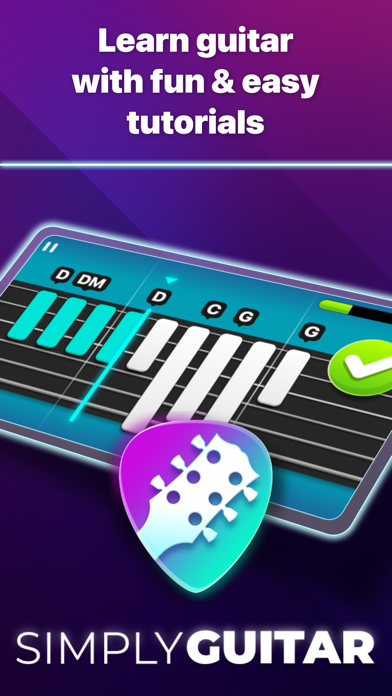 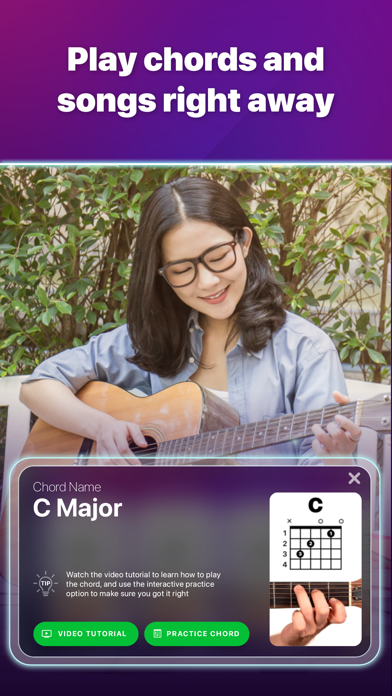 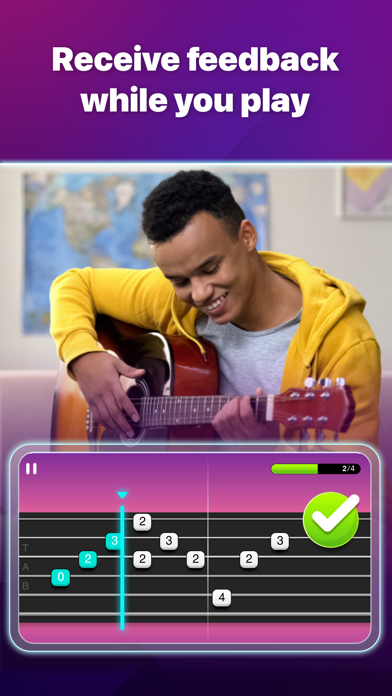 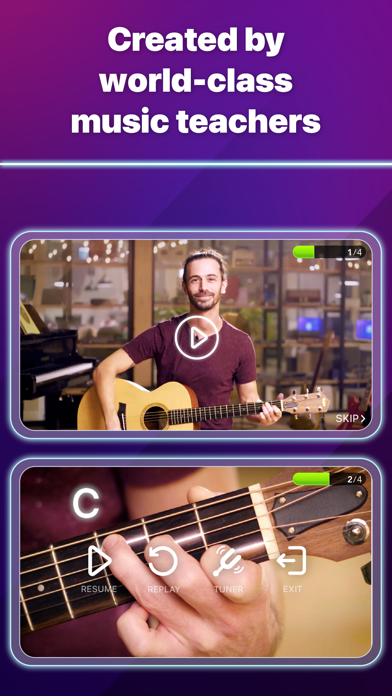 It was good but…

So I wanted to impress my family by playing a song for them when I learned enough. The app made both of my guitars lose one of the strings. I won’t be using it again even though it was fun. The worse thing was one of them was my Grandpas… I don’t know what he’ll say. But for anyone with a better guitar, have fun!
By LittleMoonAnimations

It broke my string!

Okay so I know my guitars and I was in tuning when this happened, I was on the 2nd string and it actually broke my string my uncle gave me that before he died so I was really sad and this happened like 2 minutes ago so yeah I HATE THIS GAME/APP it literally broke my string and it’s like 8:07 pm right now so yeah I hate this app/game
By daily beginning

It’s pretty good but after you learn 1 chord and songs, you have to play a daily membership :(
By lolqueen6264

I have been wanting to take after my gradnfather soon to live with me and my family! He plays guitar and I want to learn to, i am so happy i found a trustworthy app to learn on my interests! TYSM
By musįc førever

Just started not good so far

It doesn’t let me go past the tuning and I got to the end of tuning and it but me back to the start😡.
By hdhdgdhdhdgdgdhhfhd

You can’t make it very far without having to pay an outrageous price for a subscription plan. You can’t even finish learning your first chord before it’s required. I would not recommend this app if you’re looking for something free.
By Vance Booth