Never forget to pay a bill on time with this app and get away from late payment fees. Simply add all your bills to this app and it will remind you to pay the bills on time. Features: * Non cluttered user interface * Add new bills very easily * Set your Budget * Bill analytic graphs. Know what costs you more * View all upcoming, paid and overdue bills in Bills dashbaord Length of Subscription: - 1 Week - 1 Month - 1 Year Price of Subscription: 1 week: $2.99 per week comes with 3 Days Free Trial. 1 Month: $5.99 per month comes with 3 Days Free Trial. 1 Year: $29.99 per year comes with 3 Days Free Trial. - After 3-Days free trial subscription renews automatically unless cancelled at least 24 hours before the end of the 3 day trial. Subscription may be cancelled at any time within the iTunes and App Store Apple ID settings. All prices include applicable local sales taxes. - Payment will be charged to iTunes Account at confirmation of purchase - Account will be charged for renewal within 24-hours prior to the end of the current period, and identify the cost of the renewal - Subscriptions may be managed by the user and auto-renewal may be turned off by going to the user's Account Settings after purchase - Subscription automatically renews unless auto-renew is turned off at least 24-hours before the end of the current period - Any unused portion of a free trial period, if offered, will be forfeited when the user purchases a subscription to that publication, where applicable. - Subscriptions will be charged to your credit card through your iTunes account. Your subscription will automatically renew unless cancelled at least 24 hours before the end of your current subscription, and you can cancel a subscription during the active period. You can manage your subscription at any time, either by viewing your account in iTunes from your Mac or PC, or Account Settings on your device after purchase. Privacy Policy: https://pokebill.yolasite.com/Privacy.php Terms of Use: https://pokebill.yolasite.com/terms.php 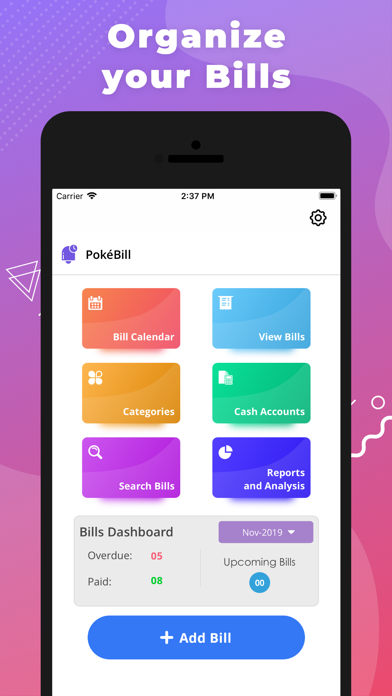 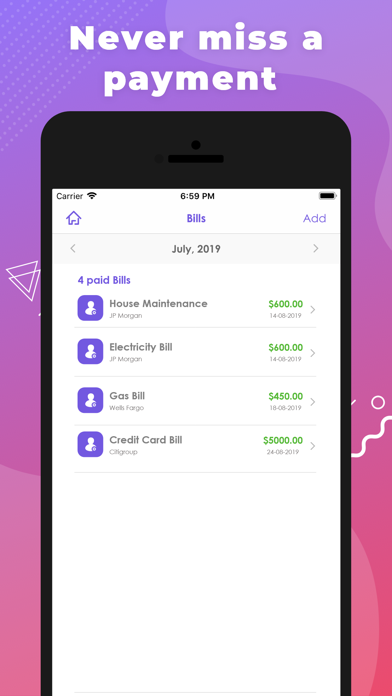 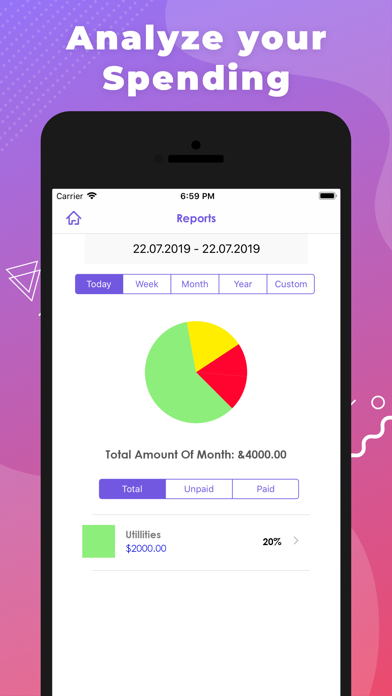 The rate app pop up made me give you one star.

I just downloaded this app and every few seconds the rate the app would pop up and so now I’m rating you because I can’t actually use the app to see if I like it because of the annoying pop up to rate your app. So one star!
By JW112216

The app is fixed

.I am about use it and see how it works.For now it is working on my iPad
By DBD76A

Free trial didn’t work kept prompting me to get subscription everytime I tried to save a bill and I had already registered for premium .Deleted app
By Sourpatchchik

It won’t allow me to save anything!!! It keeps asking me to subscribe which I already did, I tried everything from re-downloading the app. Nothing works!!! Fix it ASAP!
By Chelley84

Love it
By phebe arroyo

I spent a significant amount of time organizing each one of my bills and adding them manually to this app. A couple days later I installed the update and everything was erased. There is also no way to go back and mark a bill as “un-pay” if you mistakenly press the wrong bill to pay. Lastly I had over a 1000 notification in the little red dot above the app. Apparently if you mark a bill as reoccurring it will pop up as a red notification.
By 57dgjl

The app looked better before.

The graphics are way toned down now than before look like a cheap html website now. What happened over night?
By FleetingRevenge

I am liking the app so far but I can’t delete any errors. This is making my bills look off because I had to renter the bill for the correct date but the old one is still there. I had to add more money to the account in order to pay it. There needs to be a way to delete the bills entered.
By RedeemedSimply

I like the interface of this. And, I have been looking for something like this for awhile. If you added watch support, that would be awesome. 😊
By Ima_Foxy_Lady

Pretty plain and uncluttered app for tracking bills. Be nice to see a dark mode and maybe notifications. Nice job!
By Maui Kid