The future of health research is you! Now you can contribute to groundbreaking health research in women’s health, hearing health or heart health simply by using your Apple Watch and iPhone, and the Research app. Your data and participation will help advance researchers' understanding of these areas in health that have not been well understood until now and could lead to the development of new products that will help millions lead longer and healthier lives. 1. Join the Apple Women’s Health Study, conducted in partnership with the Harvard T.H. Chan School of Public Health and National Institue of Health Sciences to help advance the understanding of menstrual cycles and health conditions such as infertility, osteoporosis, and menopause. 2. Join the Apple Heart and Movement Study, conducted in partnership with the American Heart Association and Bringham and Women's Hospital to help advance discovery in heart science and to help us learn how activity and your habits can contribute to a healthier heart. 3. Join the Apple Hearing Study, conducted in partnership with the University of Michigan to help advance the understanding of how sound exposure levels over time can impact your hearing, stress levels, and cardiac health. Features: Review available studies, learn about the research partners and the research goals, understand study expectations, and if you are eligible, enroll by providing your consent. Choose which data to share and with what study, and review and manage data collected. Perform relevant tasks for enrolled studies. Learn how other Apple research studies have contributed to advancements in health science and to the development of innovative health products. 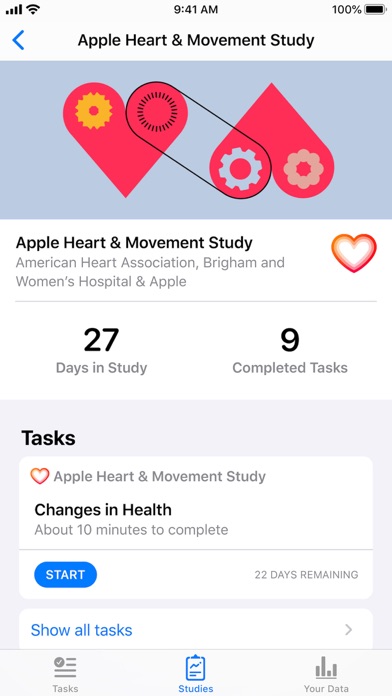 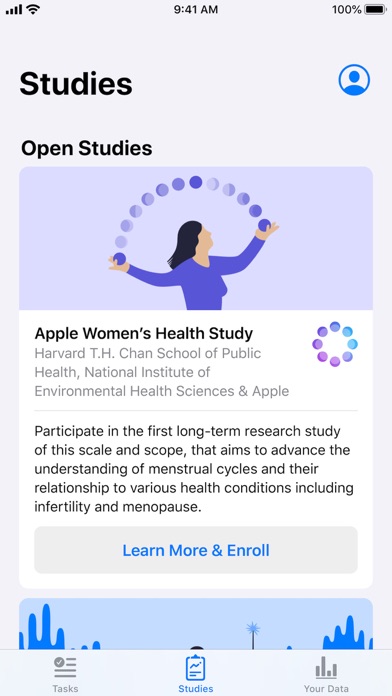 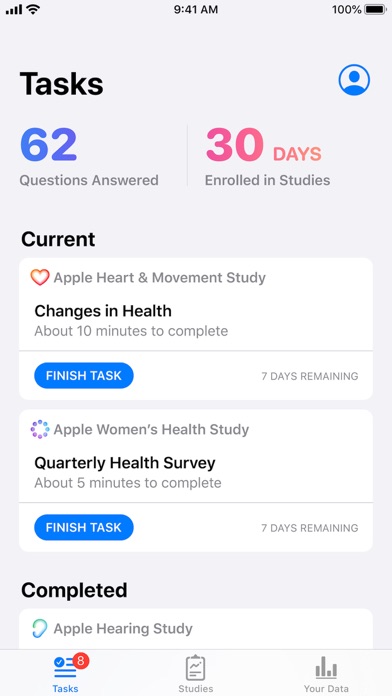 I typed the right phone number in my country and i selected my country vietnam but it said invalid number??
By tumo07

Your Fellow Human Being

Ansuz07 is SO COMPLETELY RIGHT! [Soap box ON] Always expecting to be paid for SIMPLY HELPING your fellow human being is an example of the WORST of human behavior: greed! Helping, TRULY, has its own rewards, and ANYONE could find themselves in a similar situation in the future. In order to deal with modern society’s problems, which are NOT, IN ANYWAY WHATSOEVER, contained within ANY country’s borders (“wall” or not), we MUST WORK TOGETHER! We have ONE PLANET, with a rapidly, ever-increasing population. We no longer have the “luxury” of simply moving to another part of the world! Think of what could be done if all the “defense” budgets were used to feed people and cure diseases???! All those who say “that’s not realistic” are outnumbered by hundreds to one (especially if their jobs depend on CONSTANT CONFLICT)! Babies are NOT, are NOT, are NOT, NOT, NOT born with ANY ENEMIES!!! Why are these SIMPLE facts not recognized by EVERYONE?! [Soap Box OFF]
By App_Known

Why just Americans?im not from usa but I’m interested in this whole thing.you’re losing many people by making this app only for people in usa
By Camelia the half gamer

Eats up your battery within hours when you have the app on both the Apple Watch & iPhone 11 Pro.
By Northwest Oregonian

It will not accept a non-U.S. phone number

As an expat I would love to volunteer for a study, but the app won’t accept my non-US phone number.
By jake_the_snake

I do understand that it is illegal to collect information in children under 13, But when I did put in my age(which is a few years older) I am still restricted from participating in the studies, if the organizations are looking for a particular age group, than make it clear on the page on the app. On the website taking about this app’s launch, it describes the hearing study as, “With over a billion young people who could be at risk of hearing loss due to unsafe listening, WHO is addressing this challenge through raising awareness and setting new standards for safe listening. The knowledge gained through this study will contribute to future public health action in this field.” And here is a statement from there privacy policy for the app, “Our Apps are not intended for children under the age of 13 or equivalent minimum age in the relevant jurisdiction. If we learn that we have collected the personal information of a child under 13, we will take steps to delete the information as soon as possible.” Although I might be a simple teen, and I can be wrong about this, but it states children under the age of 13. There in this text is some legal speech, such as “or equivalent minimum age in the relevant jurisdiction”. And I have no idea what that means. But I am sure I do qualify for the studies. I do trust Apple with my information and the related Research groups. I do completely understand that they might not want to take a minor under the age of 18 and as such, I will respect that decision. I do know that this isn’t on apple but when a company makes a legal disclaimer, it should be clear and concise in order for people who haven’t spent years in the high end of the work force or the legal branches of the government and companies respectively.
By #nojoke

So I like the app overall, but please add in more studies! I’m a male, and I obviously can’t participate in the menstrual cycle study.
By CormacC_

Can’t say anything about the app because singing up with my European phone number written in international format (+{country code} {prefix} {number}) is impossible. The form says it’s invalid no matter how you write it. If only US numbers (and participants) are welcome then it should be clearly stated in the app.
By Beerlander

Not only is this a violation of medical privacy, but the app makers are earning money from the people who use the app and offer ZERO compensation. Garbage.
By Bob9000000