PokerBROS: Anyone Can Now Play Texas Holdem Play poker with friends online anytime and anywhere you like. Specifically designed for all levels of players, from beginners (practice mode) to experts (tournaments mode). PokerBROS suits any player who wants to practice and challenge friends. Become part of the world poker community. Get your own poker table, design your own poker room and play Texas Holdem Poker Bros allows you to design your own table and personalise your appearance. Invite friends and share what you have done while trying to win the jackpot. You can feel like the owner of a Las Vegas casino, showing off your poker skills with your friends. There are no silly rules just your poker room, your poker table and your game the way you like it. Be like Bond: Play Texas Holdem like you are in Casino Royale Texas Holdem is now Bond’s game and you can play like him. You are in full control. Raise the steaks, go all in or fold at the first blind. With Poker Bros it is completely your call. Get all your favourite poker features Play the world’s most exciting form of poker - Texas Holdem Create your own room and table Customized players Full real-world poker experience online Invite and play with friends Join the world’s poker community with Poker Bros today. 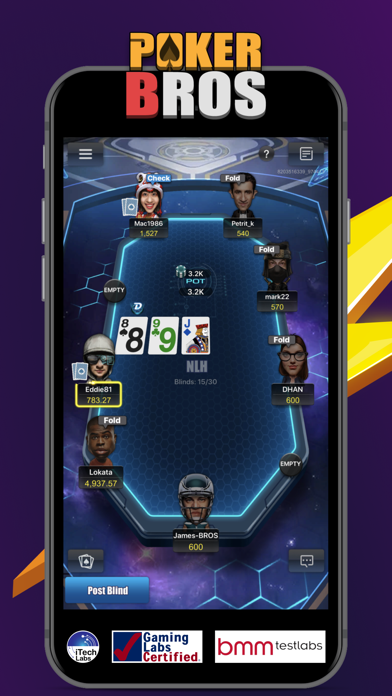 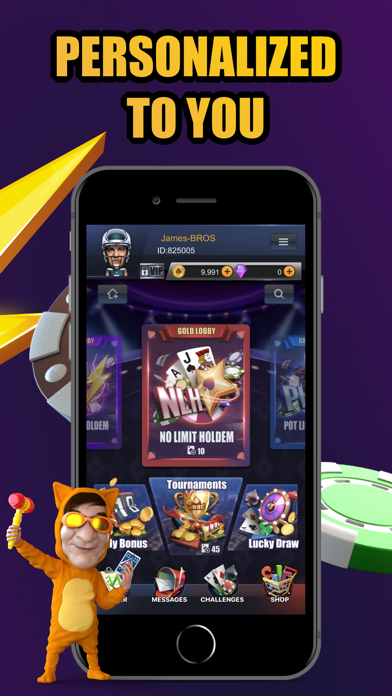 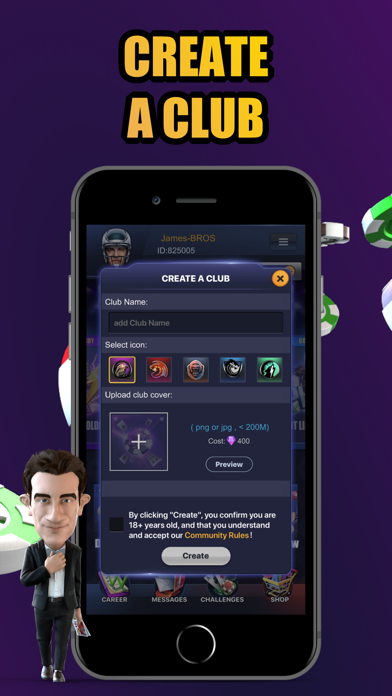 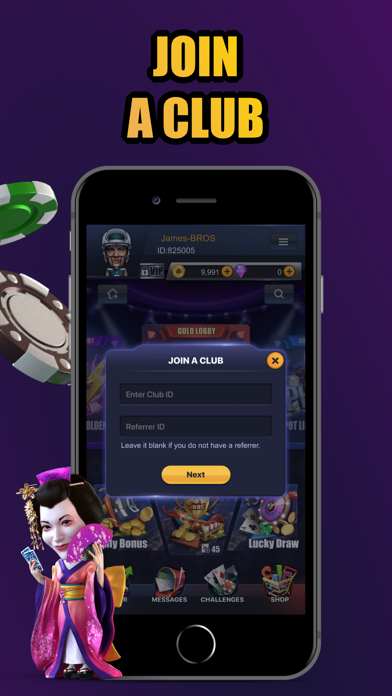 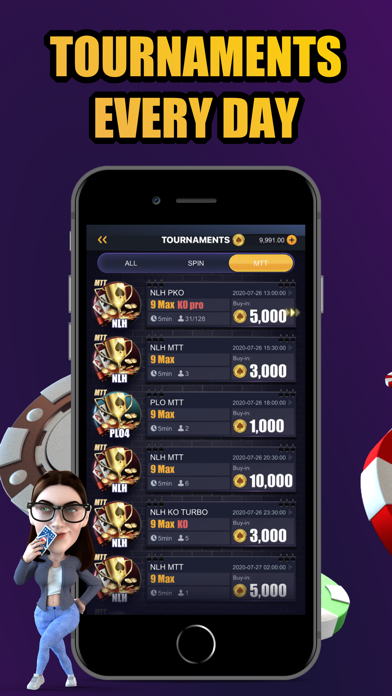 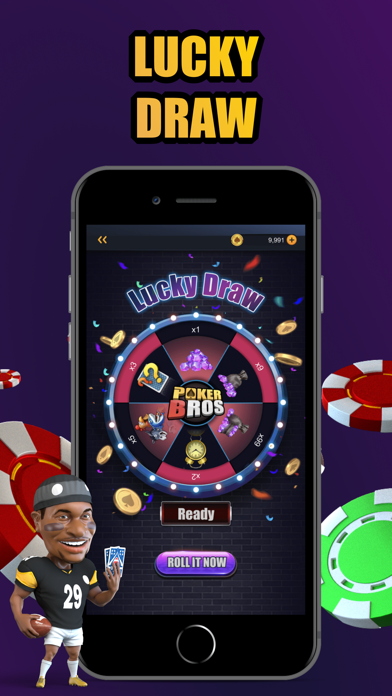 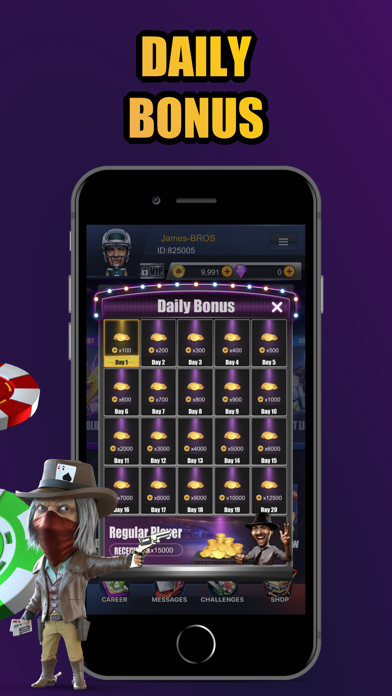 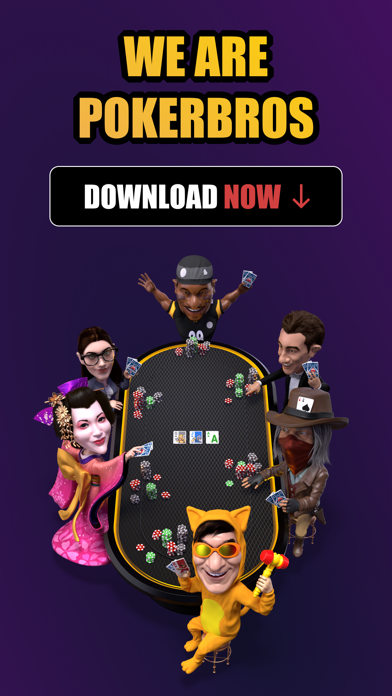 Don’t waste your time
By Davidalba345

Worst app creating 3 full houses, 4 straights in most games. There is no random for this and there are cheat codes for this app.
By Bhavani 22

Wont get me off observing

I cannot join the tables. Whenever i try it puts me on “observing” which just lets me view the table and not play. Its not because i dont have enough chips. Then when i leave the stupid observing crap i dont get my gold back. Fix your game and i will change my rating
By 12344432224653552

Don’t play here. You will regret it. I went to a 5-10 table and then a 10/20 for real money. Sat down with the table max and I was the first person to sit down. As soon as I sat at the table, two shady players sat next to me. I was dealt pocket aces on the button.. I just doubled the big blind.. the other player re raised, and the player next to him re raised that causing me to re raise.. the first raiser went all in and the other player mysteriously folded and of course I called. Player shows 10-7 off suit. I had aces of course and the other player who mucked after making huge raises showed KQ.. the flop came 7-7-4 then an 8-4 causing my aces to get cracked by a trash hand of 10-7. 1000 bucks down in one hand. Both players got up from the table and left before the second hand could be dealt. If that isn’t shady, I don’t know what is.
By DJ Violitzi

Some Good, Some Iffy

I an lucky enough to have found a really honest club. Their are weeks where I have monies and final tables, even won a couple of the tournaments. When things are going your way, boy do they go your way. If they don't, be prepared for nights, weeks, taking breaks away from it, come back and still get ravaged by people and youll say, "he pushed all 140k of his stack against my over the top Reraise all in with AA with Q8 offsuit? Hah! What an.... Boom, Third Q on the river. And it will happen over and over and over and over and over.... Then eventually, here and there, they will give your butthole time to heal and will atleast be nice enough to give you enough to keep playing with having to reload. I have pictures, weeks on weeks on month's of the same predictable rivers... it actually makes you afraid to play AK suited. I stay away from ring games. MTTs are fun... The overall look and appeal of the app is my favorite about the app. PLEASE FIX THE MYSTERIOUS "IPHONE PUT DOWN THEN HALF CHIPS WERE AUTO-CALLED" problem. Have it ask "Are you sure" when my iphone decides to call 80k with j2offsuit ruining hours of "the tournament climb". Im not the only one for sure. Atleast, look into it. However, every hand always has action...i guess everyone would get bored pretty quick if they never felt that river rush over and over ans over again - or seeing a royal flush, full house, and a straight hand after hand Thanks.
By HaxorOfBrick

Ive played here for a few months and wish id have found it sooner. Dont pay attention to the people here complaining about bad beats. We have all felt that when our cards dont hold up lol. And if you spend time here, you quickly realize there is no incentive for them to not run things straight, as they are pretty successful and jeopardizing that would be foolish.
By Hanoiuyopi

Had 1000s stolen from me using this app.

Do not play poker on this app, I had thousands of dollars stolen from me while using this app.
By Suchbdvjfd

Be warned. This game and all the agents that control it are a scam. Good luck to all who even try this platform. It’s absolutely disgusting poker and the players are the absolute worst. The worse you are, the more your rewarded. The FBI has been notified and is actively investigating this site. Good luck to all. ***UPDATE*** The SEC and FBI are currently both investigating this ring. This app ruins lives and the play is not fair and regulated. The operators of this website are fully aware and involved with the money being laundered through different agents and unions. They should be ashamed of themselves. You’ll see the owners of this app gambling poker at the casinos tossing around money that is laundered from players like us. It’s disgusting and they’ll get what’s coming to them. This will never last. Be warned people, don’t play or buy in with any group or agent. Don’t believe for one second that the operators of this app don’t approve for real money play. They’re in charge of the operation and profit from it tremendously.
By factchecks

Really good app i enjoy it very much
By Bigdaddychris_1