Mail App for Gmail is a brand new app for the next generation of Gmail. It’s perfect for quickly triaging your inbox and uses Gmail’s blazing fast new platform to instantly send and receive messages. Mail App for for Gmail features: - Privacy Aware No data pass on our servers - Fast tools for managing your email - Rich keyboard shortcuts for even more efficiency - A brand new, rock-solid codebase written entirely in Swift - Zero wait time for launch - Much more reliable performance on Virtual Private Networks (VPN) since it does not use IMAP or POP connections - A beautiful interface built on a custom new animation engine - Instant sync thanks to secure, all-HTTPS communications Note that Mail app for for Gmail a native Gmail app for triaging recent email, but not currently an archival utility for searching your entire history. We’d love to hear what you think about Mail app for Gmail. To reach us, use the in-app support option in settings. Mail app for Gmail is an auto renewable subscription: - Badge removal - Live support ------- Price may vary by location and active promotion. Subscriptions will be charged to your credit card through your iTunes account. Your subscription will automatically renew unless canceled at least 24 hours before the end of the current period. Manage your subscriptions in Account Settings after purchase. Any unused portion of a free trial peri​od, will be forfeited when the user purchases a subscription. ------- Privacy Policy: https://mailappforgmail.com/privacypolicy.html Terms of Service: https://mailappforgmail.com/eula.html 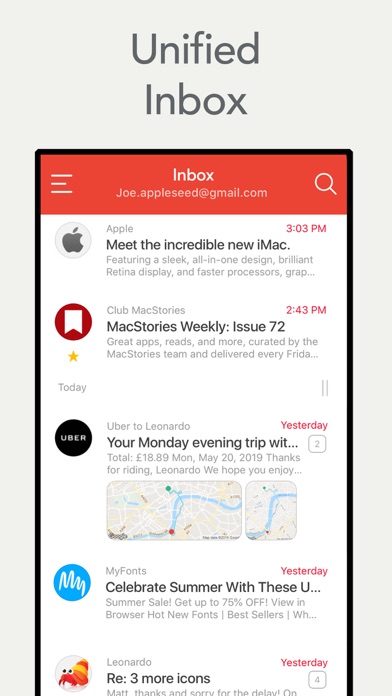 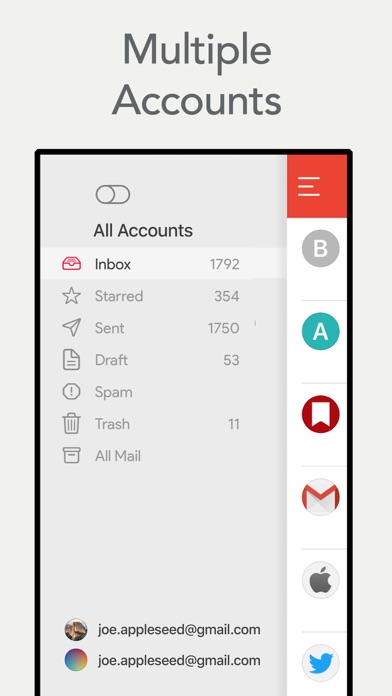 Missing Leading App didn’t stated before if it’s In app purchase nor a freaking trail version I don’t have time to waste time is money. Not only is apps and other apps should be either say it so when we are quickly browsing we would no. Of course I understand it’s free to download. But to use it really not. Free trial version are really not free because at the end of the trial you have to pay. So either you make a limited function version and a full function version.
By marzave6996

It’s not the real gmail app
By searchbeforeuusetheapp

Download tried twice. Won’t even open or do anything.
By tooter09

Not Gmail - change your icon!

The Icon looks so similar to Gmail that I thought it was the Google app. Change your icon!
By Sl8r70

In the app store it says $9.99/per year. Downloaded it, granted it access only to be confronted with the real price — $2.49/per week! That’s $129.48/per year. Then, when you bail on this install Google informs you that Airmail Zero now has access to all your GMail messages! This is after NOT agreeing to subscribe. Would you trust this outfit after that?
By monk-12x

Got this app on my tablet and now I can not get the dumb thing off. Hold it down till it shakes they said, then hit delete. THERE IS NO STINKEN DELETE BUTTON
By pattypattytricia

There is nowhere to cancel the subscription. I tried to email the company and still have no response about a cancellation.
By Thall6163

Definetively is the best for my needs
By Dejontae Dauby