Crafty Craft for Minecraft™ is the best Skin and Add-on creator for Minecraft™ PE. More than this Crafty Craft is a community for all Minecraft™ players that want to create and share with all the world their creations. However, make add-ons is not an easy task and most players cannot do it because it required programming skills. Crafty Craft will give you the chance to do all this with a touch of a button! Crafty Craft offers you the opportunity to post your created add-ons on our feed and let other people appreciate your work! Don’t forget to comment and like others add-ons. You can download and install add-ons that other people create. What you can do in our add-ons creator: - Modify animals/mobs behaviors and skins (bat, blaze, zombie, skeleton..). - Change the food skin and effect (apple, golden apple, meat..). - Change the effect of projectiles(arrows, fire ball small, fireball large, snowball...). - Change TNT explosion range, power and effect... - much more... What you can do in our skin creator: - Import images from gallery and transform them in a Skin for Minecraft™. - Edit every skin in the way that you like. - Create new skins. - A lot of handy and useful tools for editing. Also Crafty Craft has the biggest database of ready to use skins, add-ons and maps. You can download and install them. Every day our database is updated with new skins, add-ons and maps. Information about Crafty Craft for Minecraft™ publications/services: All premium features: - Create unlimieted add-ons and skins - Install unlimited add-ons and skins - Use all instruments for creating add-ons and skins - Use unlimited all new skins and add-ons - Post unlimited add-ons - Every week the skins and add-ons database is updated - No ads Name, length and prices of our publications/services are: - Special Offer - first 3 days for free, then you will be charged for $2.99/Week. - Go Pro Monthly - first 3 days for free, then you will be charged for $15.99/Month. - Go Pro 3 Months - the price is $39.99/3 Months. - Any unused portion of a free trial period, if offered, will be forfeited when the user purchases a subscription to that publication, where applicable - Subscription automatically renews unless auto-renew is turned off at least 24-hours before the end of the current period. Account will be charged for renewal within 24-hours prior to the end of the current period, and identify the cost of the renewal.Subscriptions may be managed by the user and auto-renewal may be turned off by going to the user's Account Settings after purchase.You can cancel your subscription via this url: https://support.apple.com/en-us/HT202039 - Privacy policy: http://craftycraft.develoapper.xyz/privacy.html - Term of use: http://craftycraft.develoapper.xyz/terms.html - Support: http://craftycraft.develoapper.xyz This is an unofficial application for Minecraft™ Pocket Edition and Minecraft™. This application is not affiliated in any way with Mojang AB. The Minecraft™ Name, the Minecraft™ Brand and the Minecraft™ Assets are all property of Mojang AB or their respectful owner. All rights reserved. In accordance with http://account.mojang.com/documents/brand_guidelines. 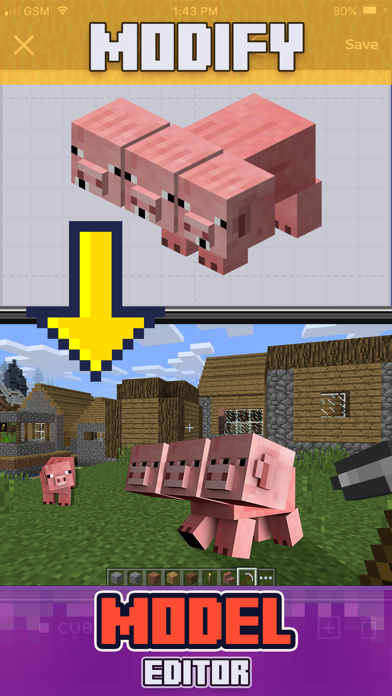 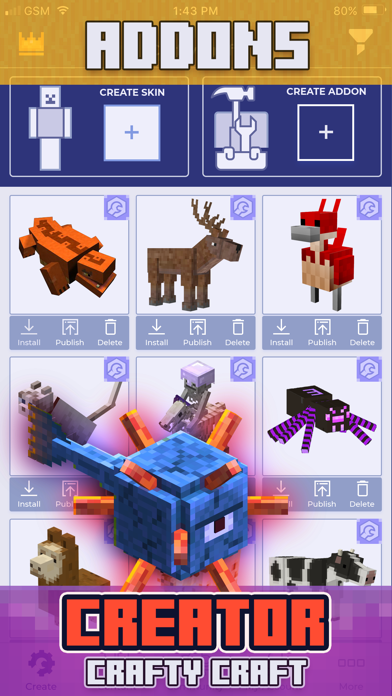 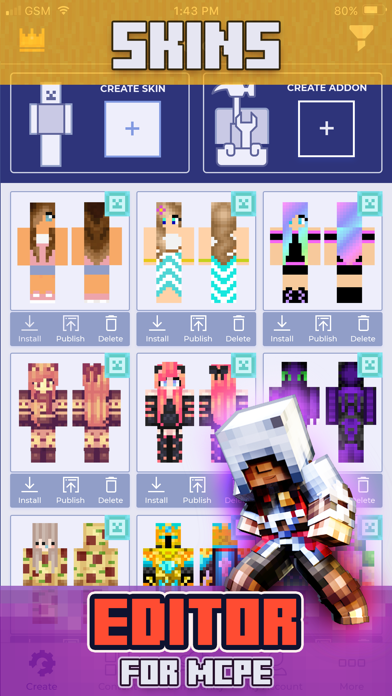 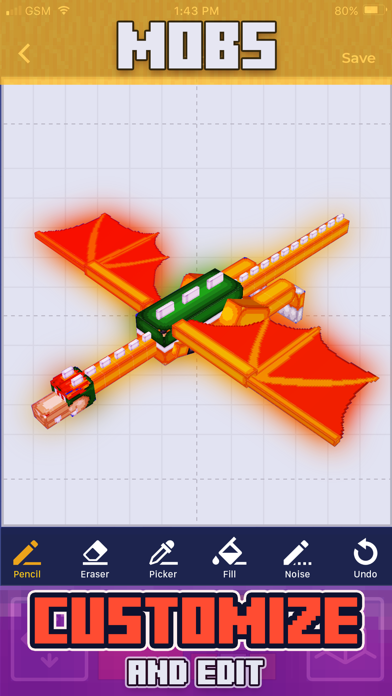 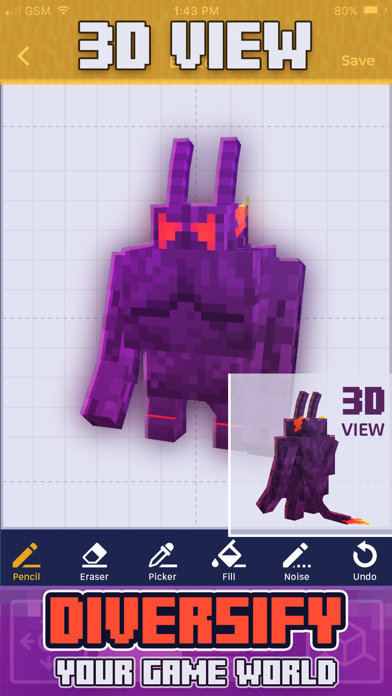 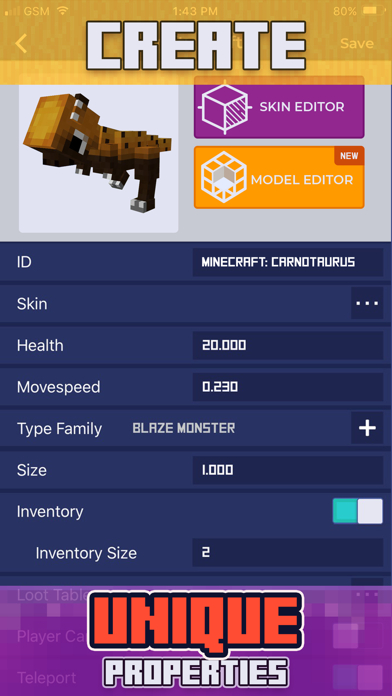 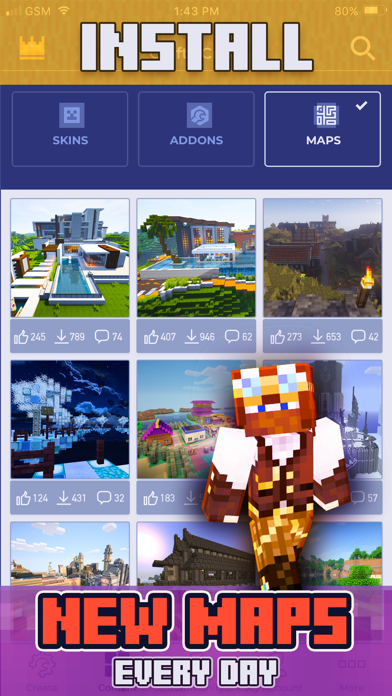 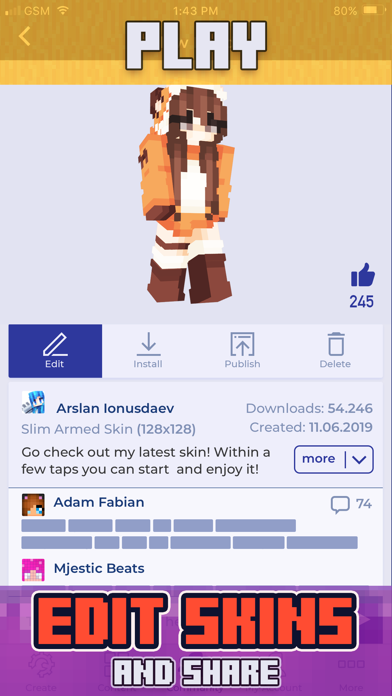 Glitches Some projectiles can’t be shot by mobs that otherwise should be able to when you edit the mob. For example, ghosts can’t shoot fireballs for some reason, blazes can’t shoot fire, llamas can’t spit, and the ender dragons projectile’s animation is odd. The iron golem was standing still everytime it tried to target a mob, or walks very slowly for some reason, the guardian and elder guardians beam attack animation is off when edited in an add on. Also, adding a custom skin from your camera roll to a mob doesn’t show up properly when using add on. Stuff missing that would be nice Being able to craft spawneggs Being able to make your own projectile More projectiles like eggs More mob templates when you create a mob Make weapons you create enchantable? A way to edit how you hold the guns you make Being able to allow mobs to drop more of the same item, like making a zombie drop 4 flesh instead of just 1 A way to give a mob a set weapon, like a bow or sword Edit: More stuff to bring to your attention, if you have too many crafting recipes, they start deleting each other and glitching the add on to where if you save, it crashes. In addition, if we make a mob too big, it takes way more space then it looks like. Mobs that jump like slimes and magma cubes don’t leap at the right speed. More stuff to add: I also suggest adding a way to change the mobs attack, like maybe a wolf can bite like a ravager. A way to remove trades from villagers. Ammo for the long range weapons we make since firing infinitely is kind of op. Thank you for this amazing app! I enjoyed messing around and using this in my worlds! Many of us appreciate what you do!
By davidj20098

So I LOVE to build in Minecraft, I like to work in a rustic/fantasy style, and vanilla Minecraft doesn’t have many blocks that suit that category. I mean, sure, there’s spruce wood and cobblestone, but those are very basic. So I came across your app while I was searching the App Store and immediately wanted to try it, I downloaded it and tested it out instantly, and it was exactly as I hoped: a pixel-perfect texture editor. I loved it, I created a marble block as an alternative for diorite and installed the pack into a new world(in case it corrupted) and I loved it, it worked pretty well and had an easy install. — SkySoar11
By SkySoar11

Add rotating blocks and a growing mob feature to this.

Please make it so we can put items in mobs mouth.
By hdhhcjjcjcj

This app is great I’d just like a few things

I like this addon designer, because it lets you design custom stuff. But it’s missing custom plants and bone meal mechanics! So devs, add a custom plants feature that lets us design our own custom plants, crops and saplings, and we should be able to decide what happens to them when you use bone meal on them. And we should have more of the sound effects, like basalt and ancient debris. Because these features aren’t in the game yet, I will rate this four stars for your addon designer. I will be looking forward to these features finally being implemented.
By Ladybimmlush

Most of the community is great, notice I said most... There are a select few that post really bad things, and use this as a dating app. Also this needs a live chat, BAD. Here’s an example when you would use the live chat: say theres an add-on and its GREAT but one thing is bad, and you know how to fix it, but the creator doesn’t. So rather than fixing it for them, just teach them how to so they learn something, and you wanna have a conversation so that they can ask questions and you can guide them through the process better. Also I try to have conversations in the comment section telling them whats good and whats bad, but you need to refresh the page to actually see the response from them, IK thats not what the comment section is for, but it’s nice to have conversations with people to know what to do better and what to keep the same. Also, so for the ad my username is ExposedRussianSpy drop me a follow and a like if ya ever find me. -Sincerely, David Brown
By Steve_trailer

No
By cat faulkner😻