In this new role-playing game, you are a Rage Knight, born to fight and conquer. Battle friends and foes in a living fantasy world full of mysterious monsters and mighty enemies as you strive to become the Land’s most feared and famous Knight in the Order of Rage. Rage Knights, heroes to the people, once defended the world. Now, it is controlled and corrupted by the dark power of Lord Karnon. As a new Rage Knight, explore a rich fantasy RPG world, battle epic monsters, fight enemies and corrupted Rage Knights to create your own legend amongst the Order of Rage. BRING YOUR INNER KNIGHT TO LIFE Launch the game, create your Knight and join the new action-packed RPG adventure from Midoki and enter an epic fantasy world! • Follow the legendary Sir Edward Drakeson through your first RPG trials and battle him to prove your worth to the Order of Rage. • Earn your Gauntlet, the powerful relic and symbol of the Order of Rage and begin your epic RPG adventure in Astellan, at the edge of a colourful fantasy world. • Play the game of fame and riches by collecting legendary items to customize and strengthen your Rage Knight. • In this brand new RPG, recruit and upgrade Ancient Heroes to improve your battle powers. • Call upon your Rage to unleash your Heroes’ unique abilities during a fight. FIGHT YOUR WAY TO THE TOP AND BECOME A LEGEND In this new game, level up your Knight and battle goblins, beasts and undead creatures as you delve deeper into a world of fantasy and mystery. In this gesture-driven combat game, choose the best RPG tactics to win battles and become a legend. • Win rare treasure in hunts and quests to improve your gear and up your game. • Collect Ancient Heroes to fight by your side and summon their epic abilities in times of need. • Choose your RPG strategy. Select your weapons and heroes to fit your goals and win the fight! • Master your RPG combat skills: Create a perfect chain of attacks switching between weapon, gauntlet and Hero powers. • Defeat fellow knights, and become the Hero of the PvP arena. GEAR UP IN STYLE Your Knight, your style! In this new RPG game, create the perfect mix of style and power to stand out from the crowd! • Fully customise your Rage Knight. Show off your epic style to your friends and foes. • Collect the best gear from hundreds of items and stand tall in the PvP arena and leaderboards. • Create a look that fits your personality and fight with style. JOIN THE KNIGHTHOOD Join a guild: hone your RPG skills by defeating titanic Guild Bosses with your fellow knights. • Build your own guild: Rally your friends and develop an unstoppable fellowship - a Guild to be the envy of them all. • Chat with guildmates in real-time to strengthen your bonds and hone your RPG strategy. • Fight Epic battles. Together you can build a legacy and live up to the glory of the Order of Rage. Knighthood tailors the RPG experience to your mobile device and lifestyle. In this game, explore towns and dungeons while engaging a fantasy world full of monsters in one-handed, epic gesture-driven combat. Knighthood is completely free to play but some optional in-game items will require payment. You must be connected to the Internet to access the game. Do not sell my data: King shares your personal information with advertising partners to personalize ads. Learn more at https://king.com/privacyPolicy. If you wish to exercise your Do Not Sell My Data rights, you can do so by contacting us via the in-game help centre or by going to https://soporto.king.com/ 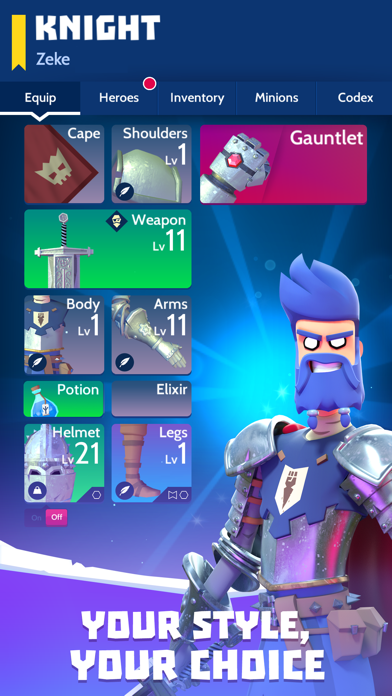 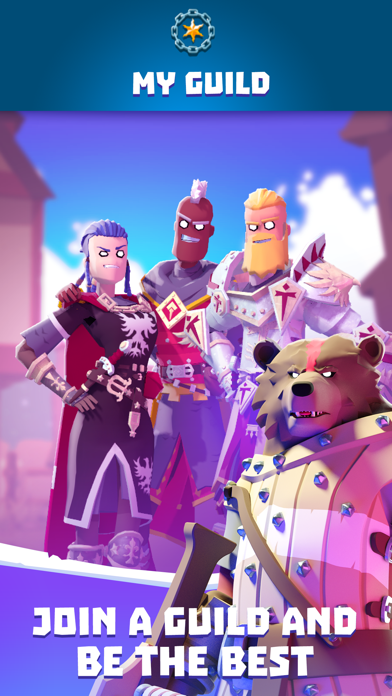 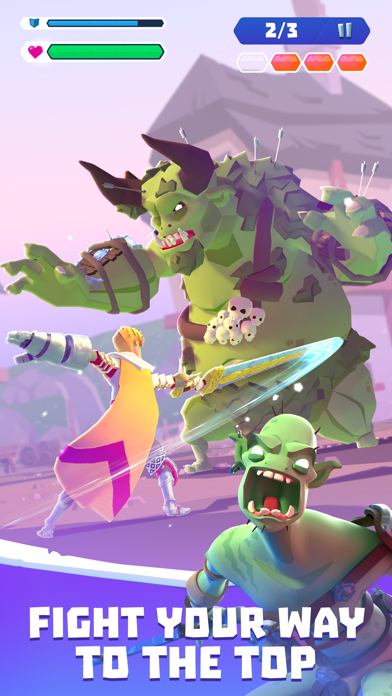 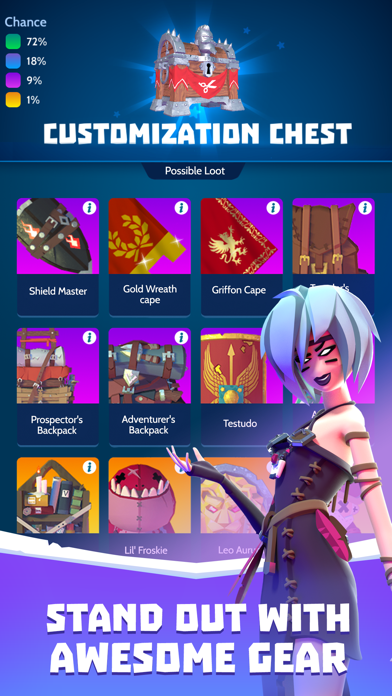 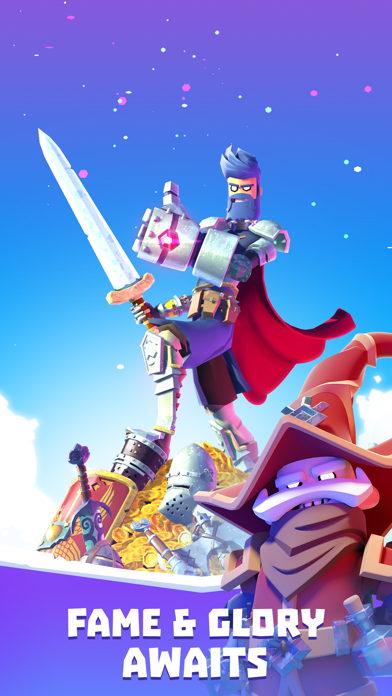 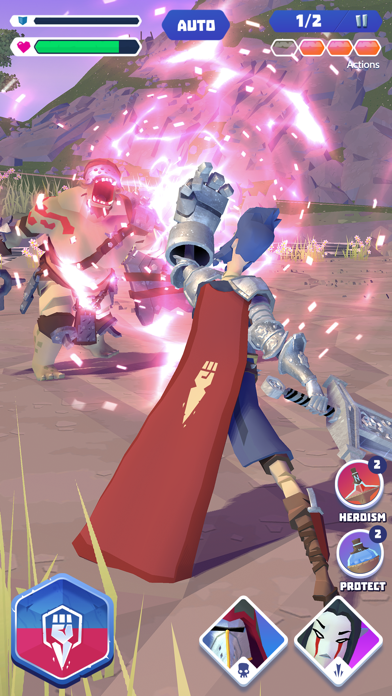 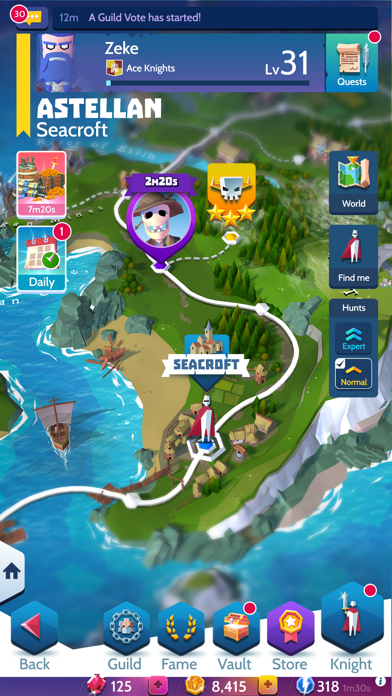 You guys should start a guild battle in the arena! That would be awesome! Overall love the game!
By caldwell77

Bring back roaming chests! The game isnt even fun anymore
By ShadowSlayer1

The game became totally weird and unenjoyable. I even spent some money early on before the update and now I deleted the game.
By loudelement

Good game but I completed a bounty and a glitch appears to not let me choose an option.
By drhoovesdad

This F2P just became pay to play. Avoid at all costs. Developers have completely cut off their gaming community. 1984 style big brother attitude with less customer service.
By Legionairy

This game looked like it was going to become something BIG. Knighthood was picking up momentum—I amongst other dedicated players were logging on multiple times a day BY OUR OWN CHOICE, players were posting daily guides on game progression, and we even had a fun little meme page on the game’s social platform where people would post quirky content. Things looked promising. But I’m afraid Knighthood might have lost its momentum with MiDoKi’s recent ill-received update. For those new to the game, players previously won chests after every “roaming monster” battle which gave them one piece of random equipment—a weapon or a piece of body armor. For context, roaming monsters are fights with specific mini-bosses that randomly pop up at very specific times throughout the day. These times are NOT posted in-game and you’ll have to consult the game’s wiki page if you’re looking for when a specific monster will spawn. One important note, roaming monsters have varying spawn times—some are very common, spawning every 30 minutes while the rarest may only spawn ONCE in a whole day. Also important to note, roaming monsters ARE NOT GUARANTEED to spawn; if multiple roaming monsters are programmed to spawn at the same time, there’s a random pick of only ONE of them to do so. Knowing this is critical to understand content mentioned further in the review. Now back to the old reward system. Roaming monster chests were a GUARANTEED drop after every roaming monster battle. They would drop a random weapon or armor piece—mostly “commons” or “rares”, and only sometimes higher rarity gear. Chest loot was farmed for two main purposes. Firstly, you could transmute gear, meaning you hoarded copies of the same piece of equipment in order to “transmute” them into a higher rarity version of that piece of equipment. Secondly, you could dismantle your undesired loot from these chests in order to receive “charms”, another in-game essential. Transmuting and dismantling loot from these roaming monster chests was at the heart of Knighthood’s gameplay; players had their own CHOICE on HOW MUCH they wanted to grind through the game and WHEN they wanted to do so. These roaming monster chests were CRITICAL for getting to higher level gear and getting higher level charms. This overall balance was what made progression in the game feel addicting and rewarding. Then came the replacement of Roaming Monster chests—the very thing that made the grind enjoyable in the game—with the Bounty Board. It was an absolute s**t show. Instead of players receiving random and often “common” loot from roaming monster chests, these chests were completely ELIMINATED from the game in order to implement the Bounty Board. This new system gave players the option to choose one of three rewards after accepting a specific bounty and defeating MULTIPLE roaming monsters. According to one of the Developers in-game, this big change was supposedly done in an effort to give players the choice to progress towards a specific weapon or armor type. Let’s look at how things actually played out... Players are limited to completing 7 bounties per week. Most bounties only offered “rare” rewards (which were already fairly easily obtainable with the old system) and occasionally players would be lucky enough to come across a bounty offering an “epic” weapon or armor piece as a reward. If you got unlucky with your bounties and wanted ones with better options, you’d need to use the game’s premium currency, gems, in order to refresh bounties and hopefully get ones that offered higher rarity equipment. The Bounty Board did nothing but make player progression VERY difficult for free-to-play players and VERY easy for pay-to-play players. Here are the reasons: -Instead of guiding players towards specific equipment, the system actually forces players to spend their premium currency until they get the bounty that offers the equipment they want. Doing so was ABSOLUTELY UNNECESSARY with the previous system. -Assuming you’re lucky enough to have a bounty that offers a reward you actually want, good luck actually trying to complete it. Remember how some roaming monsters can spawn in place of others? Players went to extremes like setting up alarms in order to log onto the game in the middle of the night, only to find that the roaming monster they needed did NOT spawn as another took its place. The game owns you instead of you owning the game. Recently, the system has been updated where only common roaming monsters appear on the Bounty Board, but players are still going a full week without finishing some bounties, only for the weekly refresh to put their progress on half-completed bounties to waste. -Assuming you actually reach the weekly 7-bounty-limit, there’s absolutely nothing left for players to do until the end of the week. This makes the game stale and in-game progress impossible until your bounties refresh. -The Forge is now useless since there’s barely any opportunity to transmute gear. -High level players are dropping like flies and guilds are going empty. Players are no longer able to engage THEMSELVES. In response, MiDoKi posted a thread on their in-game social platform for players to add their update specific comments, only to DELIBERATELY remove a handful of posts that merely made specific critiques of their update. As of the time writing this, it’s been three weeks since MiDoKi has made ANY comment on their update in-game. Instead, they revert to making “Emoji Highlight” posts in a desperate attempt to distract players. I don’t plan on letting my thoughts get buried under content like that. I won’t even get started on how they watered down freemium rewards during the troll event, forcing you to throw in 5 bucks just to get SOMETHING decent. Knighthood’s reputation won’t fall because of a bad update. It will fall because of a poor reaction to a poor update.
By An0nYm00$3

A Fun Twist on the Mobile Formula

While most aspects of this game are something you would find in any other mobile game, Knighthood is a subtle reconfiguration of the traditional formula, resulting in a fresh-yet-familiar mobile RPG. Despite needing to pay some $ in order to successfully advance through the game at a comfortable pace, there are decent deals that are offered to new players which really increase the game’s overall enjoyability. Spending $5–$10 on a Gem deal early on will really maximize the experience. A decent game is worth that much, & this game hits the mark.
By R. Zach

By removing these in the last update end game players are severely neutered.
By KBM1980

Use to have this at 5* but they decided to put bounty board and replace it for roaming monsters chests instead of just making it an addition. Takes even longer to get the gear you want unless you have TONs of Gems to unload on it. No point in even doing roaming monsters anymore. Most of event gears are now locked by a paywall and they only give you parts of it. And what are the rates of merging gear because now that it’s even more painful to get gears you want when you merge 4 of the same type and one different and you end up getting the one different..absolute douchery is going on. Y’all were doing so well...
By Itsjosh711