"Speak with me!" My name is Megumin! The ISEKAI app allows you to enjoy conversations with anime characters. As the app’s first character, I, Megumin, of the highly popular series Konosuba: God's Blessing on This Wonderful World!, which has sold over 8.5 million copies (※1), have arrived! ◆App Explanation ISEKAI is a service that allows you to have conversations with anime characters. In addition to a number of lines recorded from the anime, the latest speech synthesis technology(※2) is used to create speech that sounds exactly like Megumin to allow for a multitude of conversations. We plan on increasing the number of lines and characters in the future. ◆Function Explanations ○Talk Mode (Conversations) Megumin will respond to you after you talk to her using your device's microphone. There are over 400 voice lines recorded! She is able to respond to a variety of key words, so please feel free to try many topics.  ▼Examples of words to start conversations▼  "Good morning!"  "It's a match!"  "Congratulations."  "What is your name?"  "Konosuba." ○Alarm Clock The app is equipped with an alarm clock that wakes you up with Megumin's voice. The alarm comes with a beginning set of 10 voice lines which can be mixed and matched. We plan on adding more recordings as needed, so please look forward to them.  ▼Alarm Voice Examples▼  "Good morning!"  "Please wake up!"  "Explosion!!" ○Other Functions ・Timer ・Stopwatch ・English voice recognition and subtitles ・Outfit changes ・Character choice ※We plan on adding more characters later on. ○Points of Caution Please use the app after confirming that the free version is compatible with your device. ■■■ Regarding the Monthly Subscription Service■■■ The basic app can be used for free, but by purchasing a monthly subscription you can greatly increase the number of words the character responds to as well as the topics the characters talks about. Please confirm that the free version of the app can be used without any problems on your device before considering the paid version. ○Price and Period for "Megumin Basic Conversation - Paid Version" This is a monthly subscription that is automatically renewed at 360 JPY/month. A trial period of one month is offered at 120 JPY (tax included) for the first month only. ○Details Regarding Purchase Charges and Automatic Renewal Your Apple ID will be billed. The subscription period is one month after the day you purchase the app. Once the monthly period is over, it will automatically be extended and your Apple ID will be charged for the next month’s fee. The fee will be deducted from your account in the last 24 hours before the end of the previous period. If you cancel and then repurchase a subscription, you will forfeit any days you had remaining in the trial period. ○Confirming Your Purchases and Canceling Subscriptions Complete the following steps to confirm details of or cancel your subscription. 1. Open Settings 2. Open “iTunes & App Store” 3. Tap your Apple ID and select “View Apple ID”. 4. Tap “Subscriptions” 5. Select Megumin Basic Conversation - Paid Version and hit Confirm. *You can also confirm details and change settings/cancel subscriptions from iTunes at any time. 6. If you wish to delete the Megumin Basic Conversation - Paid Version app, after following the previous steps please cancel your subscription. You can continue to use the Megumin Basic Conversation - Paid Version app for the entirety of that pay period even after canceling your subscription. ○Regarding the Restoration of Purchases Purchases can be restored through Menu > Help > Restore Purchases on the ISEKAI app. ○Terms of Use https://isekai.app/en/terms/ ※1：As of March 2019 ※2：Inflections and intonation may differ from speech in the anime or movies. 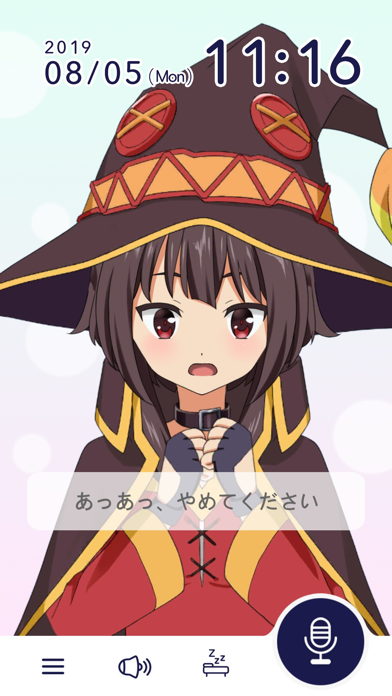 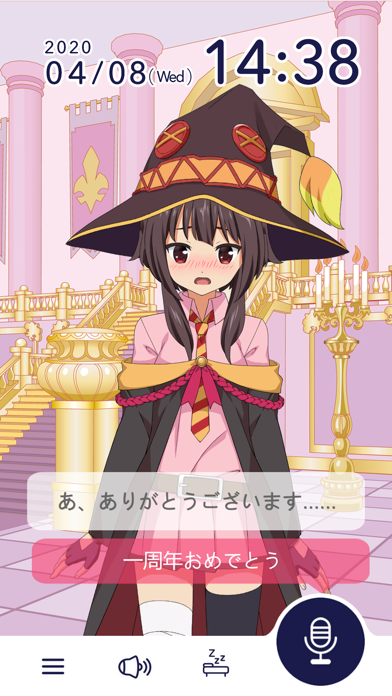 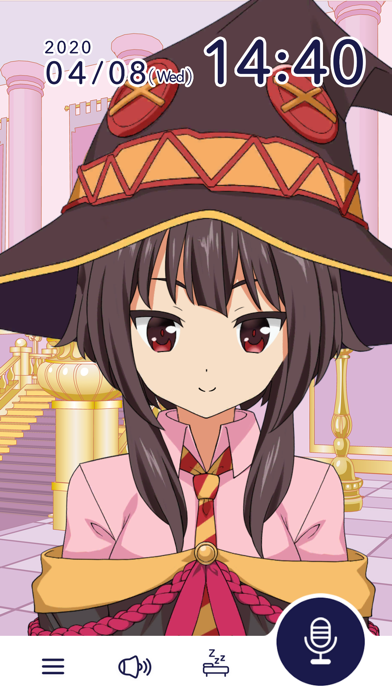 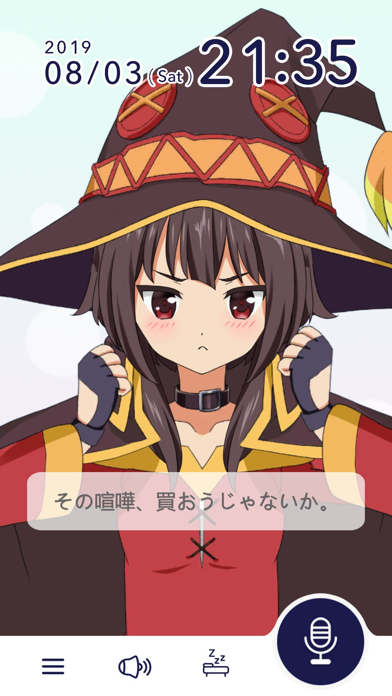 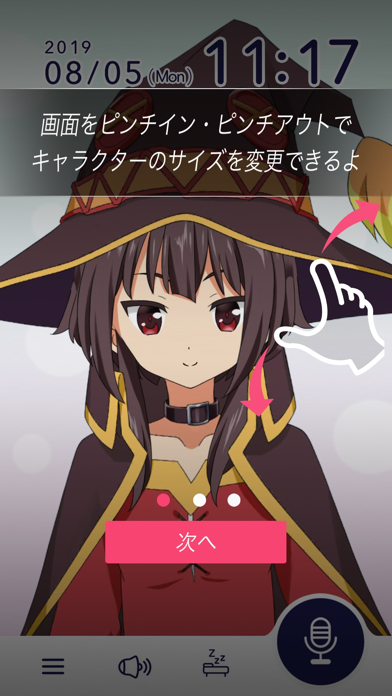 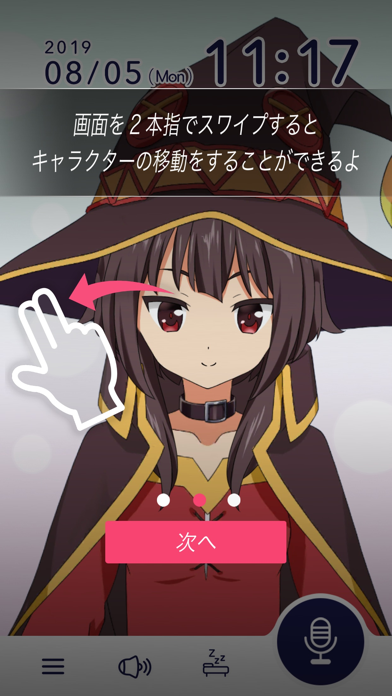 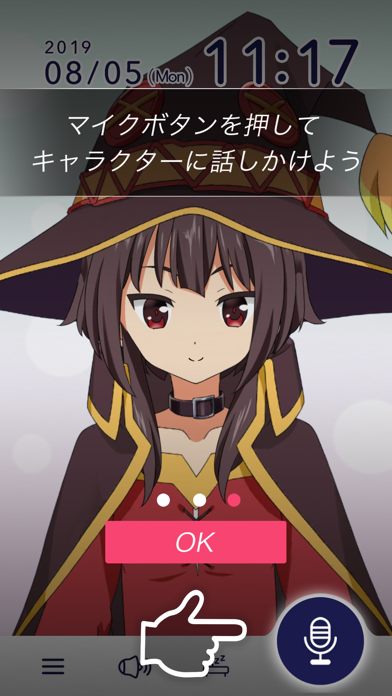 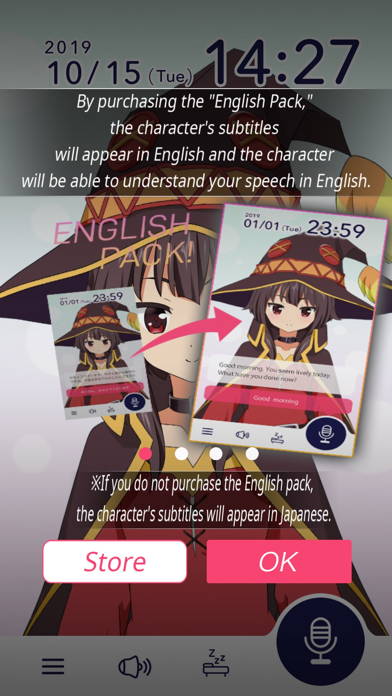 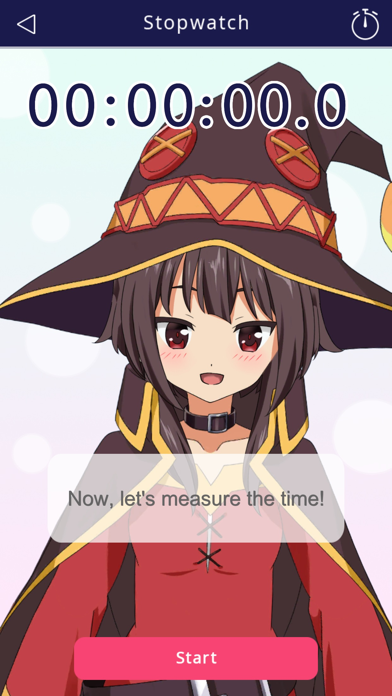 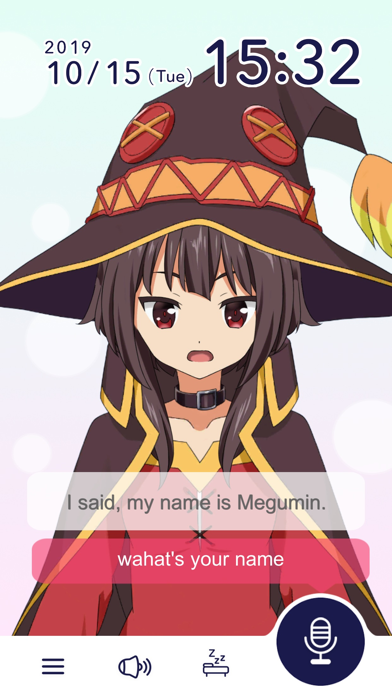 It would be better if English was free

I llove the design and everything else but the fact that u have to pay for English just kills the vibe and I would definitely recommend this app.
By CACTlNE

To lil characters and to much money to pay

Love the app, but English Pack is to expensive but it’s worth it I guess but not the Basic Talk and the expensive costumes who thought that was a good idea. Also the app keeps saying more characters coming soon Where’s my girl Aqua ISEKAI? I need the Blue Haired Goddess on my phone.
By ALonerGuy995

This app is great but..

This app is great but why make the user play so he/she can understand what megumin this saying, because it become confusing for an english man like myself who doesn’t understand Japanese, but other than that this app this great!
By ytnoat120

Megumin doesn’t even react when you say explosion 0/5!
By Nathon Stoneking

Please add more characters there are only megumen we need aqua or darkness!!
By Xkiller_27

This game is great the concept is great but the only flaw is why do you have to pay for the English pack even though the entire game is in English except for the speaking part it’s so stupid and also you have to pay to have more conversations with her it’s so. Annoying. If you at least made English free I would have given it a four star rating heck lower the prices on everything and it’ll be 5. Other than that great game, but it’s mostly just a cash grab.
By Hi! I'm the guy

Not awful. But far from amazing.

The app itself is a great concept! In fact its something every weeb would want. However everything within the app cost actual money which i am in no position to be spending. The fact that you cant actually communicate with Megumin unless you speak Japanese or buy the English pack is in my opinion DUMB. I understand they need to make money but dont you think itd be better to give a variety of languages to broaden the customers that install the app? Anyways, maybe they could add an in app currency system that takes a lot of grinding to obtain. Similar to a gotcha game, the player would have to work their way up to getting money and eventually obtaining characters and their outfits and lines. Of course, they should keep some of it being pay only, however they can totally make A LOT of changes. Still a great idea that I absolutely love!! I hope they can expand upon what they’ve already done and make this app great while influencing other app creators to make things even better!!
By Skins808

I’m honestly so surprised that they made this app! I think it’s quite a good app with the voice lines and everything. I see people complaining about micro-transactions, but voice actors need to get paid for their work too!!
By GOXFORXBROKE