Tour the Most Interesting Citywide Locations of Washington DC in Your Own Car. This App Uses the SelfTour GPS "Location Aware" U-Drive App with Entertaining Narrations and Spoken Directions. An Ideal Family Experience. Now Updated and Improved! Hundreds have used this App to see the most famous sights citywide as you sit in the comfort of your car’s air-conditioning with a bag of snacks and cooler of beverages. - You’ll drive to over 150 key places like… Arlington Cemetery, Capitol Hill, Jefferson Memorial, National Cathedral, Embassy Row, the houses of John F. Kennedy, the Clintons and the Vice President, Georgetown, Ford’s Theater, Watergate, White House, the C&O Canal and the many memorials and museums along the National Mall… learning about each as you go. - For the younger family members in the backseat… this tour includes such fun places as the Volta Laboratory where Alexander Graham Bell invented the telephone, and record player, they can search for the image of Darth Vadar at the National Cathedral, see the deathbed of Abraham Lincoln, go under the giant Chinese Dragon Arch and see the Hall that looks like something right out of "Harry Potter." - Forget those expensive bus tours. Everyone in the car enjoys this tour for one App download… which is less than the price of a pizza! A Delightful Experience! Connect your smartphone or pad to your car’s audio system for the full effect. The descriptions are performed by talented voice actors in an entertaining style, underscored with dramatic music and enhanced with photos. The descriptions have been thoroughly researched providing accurate information about the history and importance of each location. It’s easy to use! The SelfTour™ GPS system automatically triggers the audio descriptions and turn-by-turn voice directions at the appropriate spots as you drive. The route is displayed on the phone, along with pictures of each site. It is recommended another in the car uses this to assist the driver along the way and to visually identify the correct building, attraction or site. You’re in control! The easy-to-use exclusive SelfTour™ system ensures an enjoyable full-circle driving tour on your own schedule, at your own pace. No waiting for others! You can start the tour at any of its locations, stop anywhere along the way and continue again. And it is a complete circle tour so you end up where you started. The GPS always shows you where you are keeping you from getting lost. There are no advertisements and an Internet connection is not needed. Just download the App and go! All this makes your personal driving tour an enjoyable adventure.” No bus tour gives you this same experience. If there’s a tour worth taking, it’s worth taking a SelfTour! Also check out the SelfTour™ Washington walking tour experience. 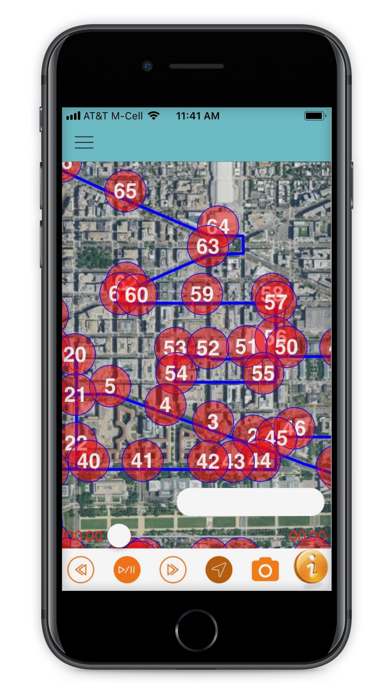 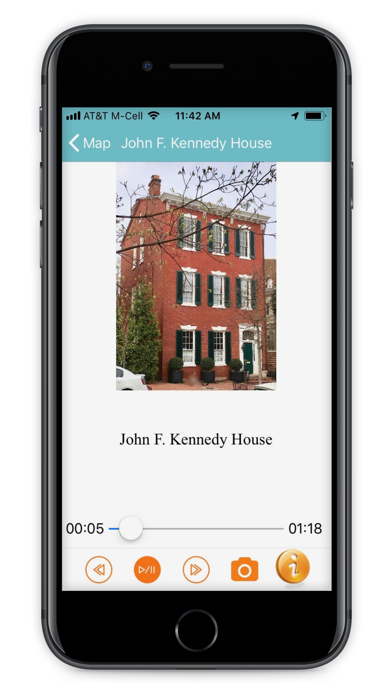 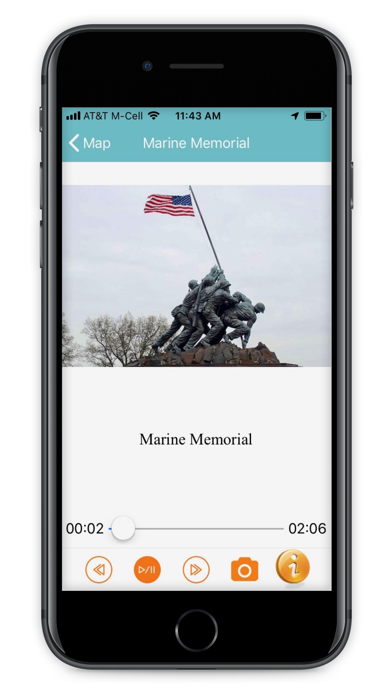 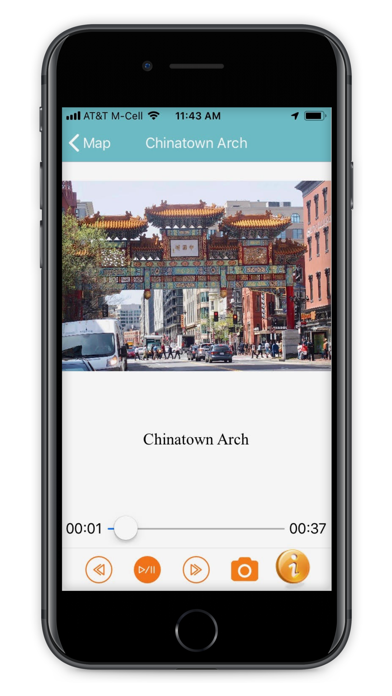 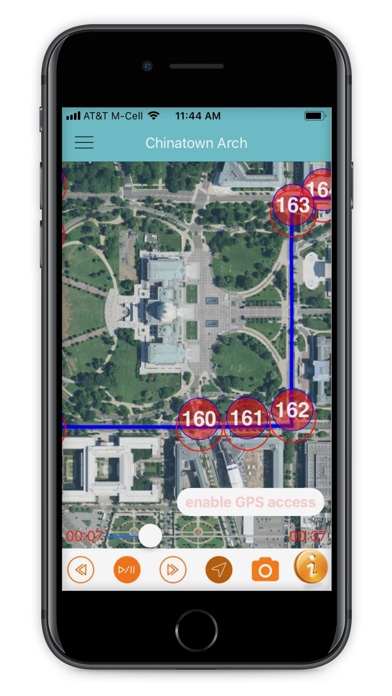 While the app functioned as advertised, there were a number of issues that made it frustrating to use: 1. As the driver, every time the map was hidden/replaced because the building image was displayed instead caused me to miss a number of turns. It’s also disconcerting when it happens and I’m coming up to an intersection then lose the map. 2. There really should be an option to turn off/select satellite imagery versus the vector street map. The photo map being overlaid by a dark blue/purple 2px thick line that blends easily into the image makes following it frustrating. 3. I’m very used to driving with Apple Maps app showing the turns in an isometric view and not top down. Additionally the map does not reorient based on the direction I’m facing, so it was difficult to try and navigate off of that if I got off the planned course. 4. The app really needs a filter to allow the user to select what they want to see. Being forced to go through 171 POIs where many were not the focus of our interest/trip, nor what we had allocated time for, was frustrating. It would be great if there were multiple pre-mapped tour routes based on interests, or level of fame that the user could filter the list to. The most desirable option would be being able to choose multiple POIs you’re interested in, and have a tour route generated from the selection. Being able to focus on only 30-40 POIs instead of 171 is way more digestible. Overall it’s decent, while my family got more out of the app, as the driver it wasn’t great to use.
By Arcfault

We were excited to use the app despite mixed reviews. Really loved the history facts with the sites and sprinkles of humor. It can be a little confusing getting started but once you get close to a site and click the site in the app, the story telling starts. However, I wish there was a refund policy but since there isn’t here’s a few tips for anyone considering downloading. It would be best to drive the city late at night when there’s hardly any traffic. That way you can enjoy the sites and stories better without worrying about delaying or navigating through traffic. If you get thrown off course at night it would be easier to course correct. At certain sites the app and/or GPS kept messing up and throwing us off course. We were driving 10-15 mph and there were multiple times when the app gave the history lesson AFTER the site had been passed. There were times we were driving in the correct direction and the app said the location was on the opposite side of the street. There were times when the app would say stay or get in the right lane and then immediately after that say get in the left lane and turn left. Crossing several lanes of DC traffic makes this difficult, and then you get thrown off course. You definitely cannot use this app as a solo traveler. You need someone to look at the map and help the driver navigate, it is a necessity. A couple of times the map re-oriented itself in the app throwing us off too. Sometimes the narration was way too fast and you couldn’t understand what they were saying, or gave late narration. Sometimes the narration repeated the history lesson on its own after it had already told the story. We tried to make the app work for the trip because when it worked it was good but eventually gave up and stopped using it out of frustration from how it kept messing up.
By trvlgrlswrld

Extremely discouraged that the map wouldn’t allow you to zoom out…it would automatically zoom back in…making it difficult to plan for sites ahead. The dialogue kept getting interrupted by driving directions. Felt very disjointed. Would not recommend to others.
By Doughyjoey

5/22/22 Horrible! Not worth it AT ALL! I wish I could get my money back. Not updated, doesn’t recognize your location well. I don’t know DC well and their traffic patterns. The directions would just start playing and you would do what was told and you end up way off coarse and couldn’t get back.
By shutterflySammyLynn

Excellent! Especially for a city with a confusing Road plan

We took full advantage of this app when my son was exhausted and wanted to nap in the car. It was amazing and full of history and detail. Washington DC‘s road plan is incredibly confusing and the app did a great job of telling you which way to go. It’s best to use if you have a co- navigator to read the GPS map. However even if you’re on your own, it’s a great way to find all kinds of secret hidden places amongst the city full of history. Well done!
By LOALM MASS

Good app, needs some directional update as there are a few streets closed or barricaded.
By aaaaasssssjjjjjjj84

During a pandemic, we thought this would be better than a crowded tour bus - and it was! A couple of new traffic patterns where left turns aren’t allowed anyone, and sometimes it repeats the previous waypoint, but we got to see and hear about DC in a unique way.
By MattSuppa

Two siblings and I just used this app over the past three days and were very happy with it. Yes, there was some user adjustment, and yes, I made u-turns and around-the-block adjustments depending on traffic flow and unfamiliarity with the city streets, but we saw places we would not have ventured by or known what they were even if we had driven by them. We particularly enjoyed the Georgetown and embassy areas - two places we definitely would not have driven to without guidance. D.C. could definitely use more visible street signs and site markers- we were surprised at how poor the signage is overall. On the positive side, D.C. doesn’t have many one-way streets compared to some other cities so it was easy to get back on track. As the driver, by the second day, I realized it was more helpful to use two devices with the app. I used my phone on the dash as my street driving guide as a sibling used my iPad to follow and play the site information through the car’s bluetooth system. I was able to follow the street patterns much more easily that way. We heartily recommend this app if you have someone comfortable with city driving, and we feel it was worth every cent. Kudos!
By September smile

Didn’t work for us. Wouldn’t play, either using Bluetooth or using an aux cord. Very glitchy.
By ashleymink

This was very easy to follow and so helpful to see most of the sites in our limited time in DC; much better than spending $100/person for the bus!
By FrodoBagginsGandalf