BeWeather is the most comprehensive and personal weather app and widget for iPhone and iPad. All using the familiar weather interface you have always used on your device. With BeWeather you can make the weather your own! POWERFUL WEATHER DATA BeWeather offers DarkSky's hyper precise minute-to-minute rain predictions and weather forecasts. BeWeather gives you access to weather maps with animated radar and satellite. Get realtime notifications for severe weather alerts. COLOR THEMES AND ICONS The app and today widget can be fully customized with 20 color themes, 150 different free weather icons and many fonts to choose from. TODAY WIDGET BeWeather's notification center widget gives you quick access to your weather, even from the lock screen. It shows as much or as little information as you like, including access to multiple locations. * Animated radar available in the US, Canada and Europe. Minute-to-minute rain predictions available in the US, UK and Ireland. Realtime weather alerts available in the US. 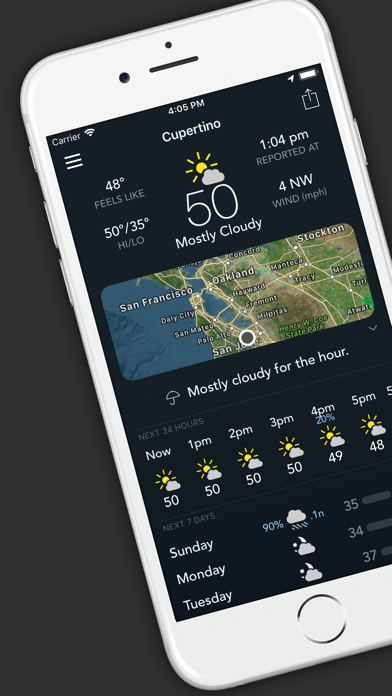 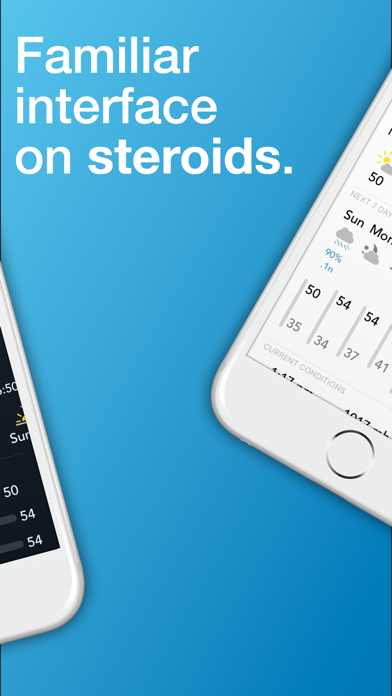 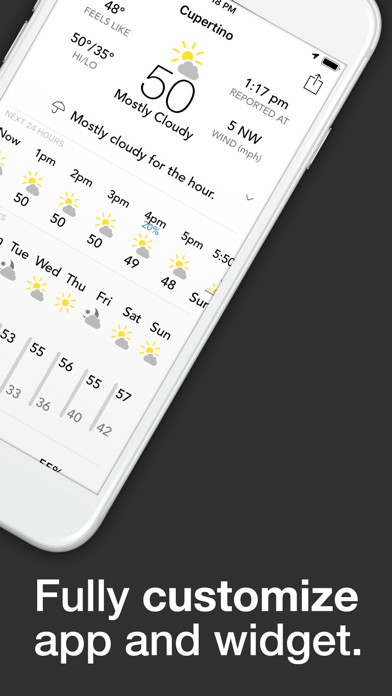 iOS 14 Home Screen widget pretty please. For the next 7 days it would be nice to be able to click on that day and get hourly weather.
By Slim070906

Been using beweather since the iPhone 5. Loved the app and was happy to pay for it twice over the years. It was Simple and easy to use! Some of the fastest alerts out there! Today I updated ver 3.1.24 and now it has adds for other apps!😢 I don’t like adds In apps that were paid for. Update: Adds are gone! Thank you beweather!
By Herbal316

The layout is ok but since switching to dark sky the forecasts and real time data are so far off it is comical. As much as 10 degrees and up to several inches of rain or snow. Please spend the money and go back to weather underground to get accurate data. Your statement claiming that data is no longer available is not true, you just don’t want to spend the extra money to use it.
By dannyt2

I have used this since the original iteration on the iPhone and it continues to evolve over the many years. I really like interface and everything seems so clean. It was especially appreciated when the app was quickly updated after a bug was showing an ad for paid users on a recent version. Just add iOS 14 widgets and it will be near perfect!
By Apple Dude Chas

So, I installed the update to version 3.1.24, and now there are ads right in the middle of the page. I PAID for the full version of BeWeather. I’ve paid for, and used, BeWeather on literally every phone I’ve had going all the way back to their first version on my Blackberry. Seriously, you as to ruin the best weather app by putting ads??? I seriously hope this is just a simple oversight that will be corrected in a day or two. Zero stars until you get rid of the ads, especially for those of us that paid for the app!!
By Ems726

Paid for the app now there are in-app advertisements.
By jpiszcz1

Added Ads Even though I paid for the App

I paid for the app (for the second time btw, after they charged you for the new version a year ago) and now they’ve added ads. This used to be the best weather app, but it’s buggy now. The radar doesn’t work and they switched to Dark Sky for forecasts which are almost always wrong.
By Onyx718

Not sure why there are now ads as this was a paid for app..
By Lonman06