Ready For The 2021-2022 Deer Season!? Deer Calls has some great calling tools to help you land that prize buck! ***LOOP & MIX Multiple Calls ALL AT ONCE!!!*** With Deer Calls, not only can you play Whitetail Deer calls, but you can also: 1) TIME and LOOP your favorite calls. 2) MIX multiple calls at once. - A TUTORIAL is also included! All calls can be timed and looped! FEATURES: -16 Deer Calls -Play calls only once if you wish -Loop calls you like on a timed loop, simply time the call loop to the timing of your choice and press “Start Loop” -Combine and mix as many looped calls as you wish! -Info page, click on the info button to get more information about that particular call! USAGE: If you simply wish to play a call once for testing purposes or if you wish to only play a call once, just press the big play button for each call (Simple Mode is also available). Otherwise, to get started with a looped call press the text field and input your desired time, then press “Start Loop”. For example, if you input 20 into the text field and press “Start Loop”, the call will loop every 20 seconds unless you press “Stop Loop”. It is recommended to not mix more than 2-3 calls per session. If you mixing calls excessively, it could possibly scare away a prize buck! It is highly recommended that you do a bit of research on the web about whitetail deer calls if you have no experience using calls. CALLS LIST: -Doe Bleat -Contact -Breeding Bellow -Estrus Bleat -Estrus Heavy -Distressed Fawn -Buck Bawl -Tending Grunt -Buck Grunt -Buck Spar -Rattle -Buck Rage -Buck Sniff -Deer Wheeze It is recommended to use an external Bluetooth speaker(s) when using Deer Calls. Be sure you have your Bluetooth turned on and speaker connected if you use this app with Bluetooth speakers. 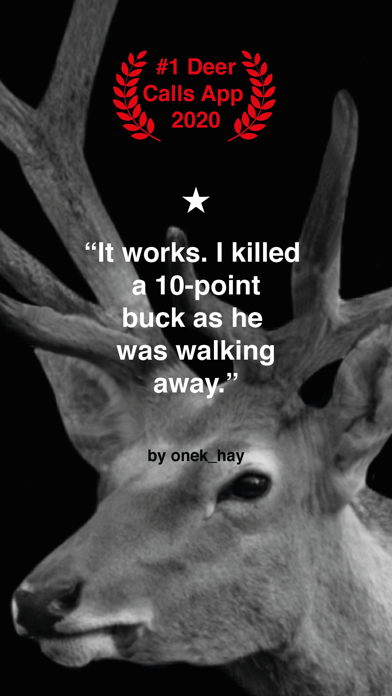 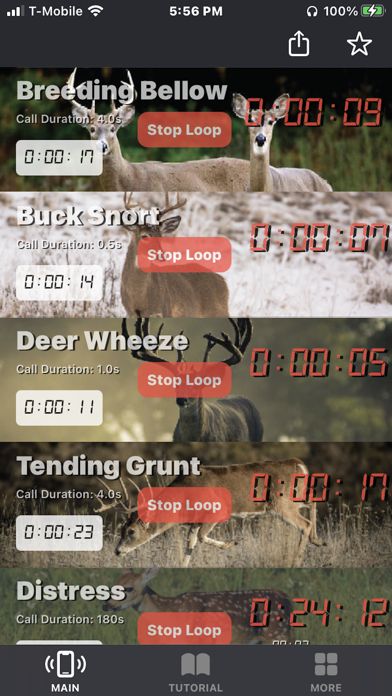 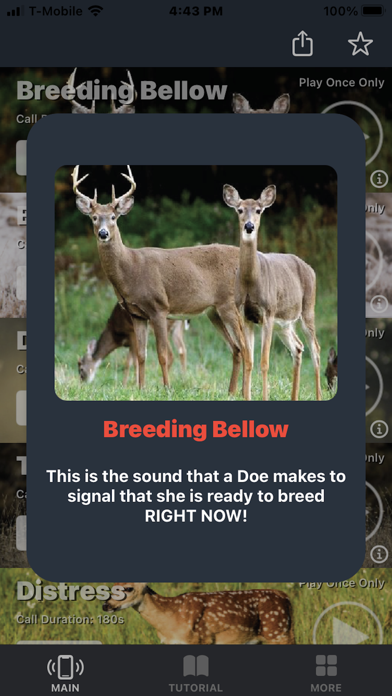 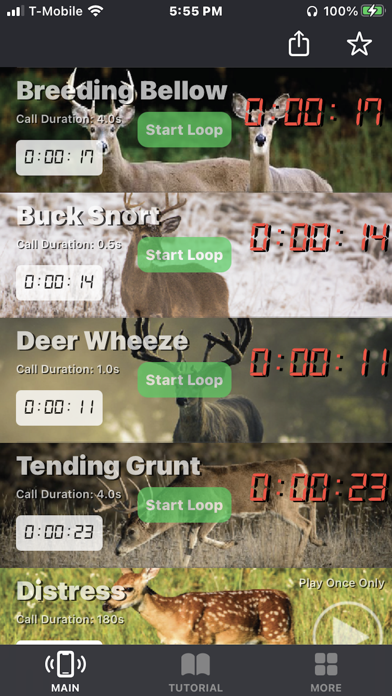 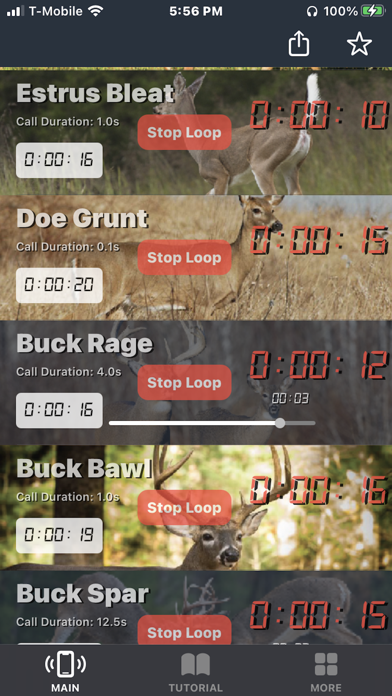 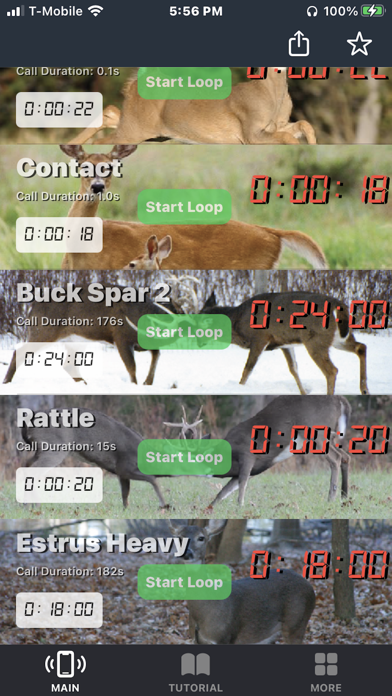 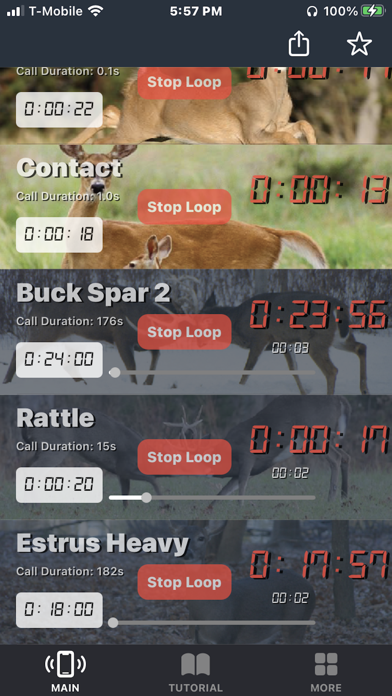 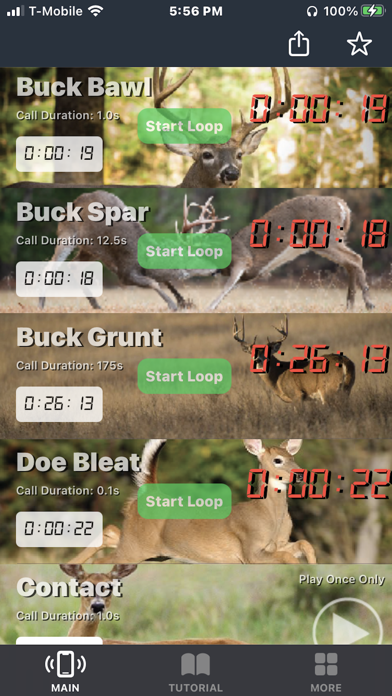 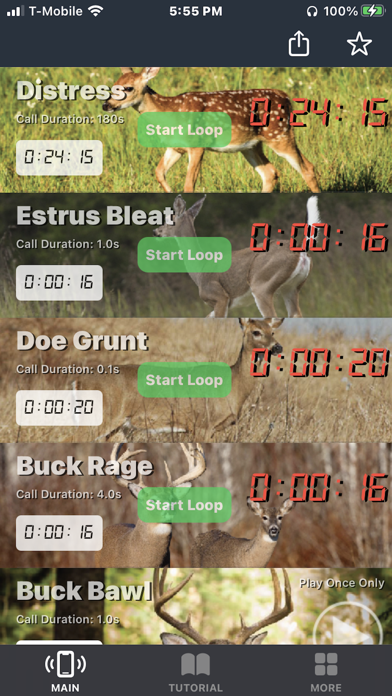 I downloaded the app while in the woods yesterday. Other than pop up ads it seemed to be working well. Suddenly a pop up ad came on with music blaring. Not good while deer hunting! This morning I was playing around with the ap. Almost every time I hit play on some of the calls, a pop up ad starts playing music. This renders the free app almost useless. I’m not going to risk using it if I’m going to get blindsided by music playing. Also, due to the pop up ads you pretty much need two hands to use the app. It’s hard to hold your rifle and operate the ap. I’m still experimenting with it. I only had the one music incident while hunting yesterday. This morning it’s happening more than 50% of the time.
By TrooperWildRide

I can’t believe I called one in with my phone!
By detgfhyddjd!

The only problem is the buck spar two. There is not enough rattling and there are to many adds but other than that amazing
By big bux 77

Highway robbery at its finest

Been using the free version a couple years so bought it yesterday. Loop timers seem to stop when Uber 2 minutes if screen timeout occurs so need to keep app running and on. Kills battery life iPhone XR. Love it other than that issue
By Vmfp3

Paid the $4.99, and now when I press a simple call, it plays repeatedly until I close the entire app. It should play once.
By Derekd2014

The concept of the app is fine but there is a major problem ( in my opinion). If you set timers on your calls and switch to a different app the timers stop! Also if the phone goes to sleep the timers stop! finally, if your using a Bluetooth speaker that happens to go to sleep because it sees no audio; then the speaker disconnects (that could just be my speaker). So disappointed that I spent $5 for no reason. 😡
By JMAdams46

I would give a ZERO star rating if possible. Blaring ads out of a tree stand is no good. Can’t turn the volume down on the ads.
By archeryhunter13

It plays ads during deer calls unless you buy it

Don’t download it. It plays ads. Just what you need in an app for deer calls
By kinni88