Welcome to RadarOmega, the next generation weather app that takes high resolution weather data to a whole new level. RadarOmega provides the highest resolution radar data with the ability to interface with cyclonePORT and connect several types of weather sensors.  RadarOmega users now have the ability to interface with the Tempest WeatherFlow weather station. Connect directly via the Tempest API or use cyclonePORT to stream your station data. Users can also use cyclonePORT to connect the Davis WeatherLink to stream sensor data. View our growing cyclonePORT network of live streaming sensor/video stations, track research teams as they deploy sensor probes in the path of the most extreme weather and more! RadarOmega provides high resolution radar data for the following countries: United States Canada Germany Australia South Korea Most weather applications, especially "FREE" ones, provide over simplified data that is slow to update and very distorted. Our goal is to educate the public on how these apps can be dangerous in life threatening situations and the overall use-fullness of having a high-quality radar application for everyday life. Other Data Overlays -Lightning Detection -24 Hour Storm Reports -SPC Outlooks - Watches - Mesoscale Discussions -NHC Outlooks - Tropical Weather Outlooks, Active TS/Hurricane Tracking -Real-Time NWS Storm Based Warnings -METARS Data Layer -Tidal Forecast Charts -Buoy Data -NEXRAD Hail History -Spotter Network Locations (soon more robust for SN users) -Map Type Customization -Detailed City & Road Network Overlay on top of radar data -Save Custom Locations -Drawing, Data Viewer, and Distance tools -Share GIF and Videos of Radar Animations If you want MORE data, we do offer subscription services. More information on what we offer in our subscriptions can be found on our website and inside the RadarOmega app. Subscriptions: Desktop Access is only available to all RadarOmega Subscribers. Gamma - 75 Frame Animations for Radar - 30 Frame Animations in Dual View - Radar History with 75 Frames - 6 Month Storm Report Archive - Dual View Display for RADAR - Desktop Access with Dual Panel - National Digital Forecast Database - Satellite Data - 3D Mesoscale IR Display - 3D Reflectivity Display Beta - - -Everything in Gamma PLUS- - - - MRMS Data - 150 Frame Animations for Radar/MRMS/Satellite - 50 Frame Animations in Dual View - Radar History with 150 Frames - 5 Year Storm Report Archive Alpha - - -Everything in Beta PLUS- - - - Model Data - 250 Frame Animations for Radar/MRMS/Satellite - Radar History with 250 Frames - 100 Frame Animations in Dual View - 50 Frame Animations in Quad View - Desktop Access with NEW Experimental Quad Panel - 10 Year Storm Report Archive Subscriptions are maintained through the Apple App Store. We will work with our customers however refunds must be done through the App Store. Please be sure to reach out to our support team if you have any problems, questions, or concerns. For Support- You can create a ticket and we will resolve as soon as possible: https://radaromegawx.supportbee.io/portal/sign_in See our Terms of Service below: https://www.radaromega.com/terms.php 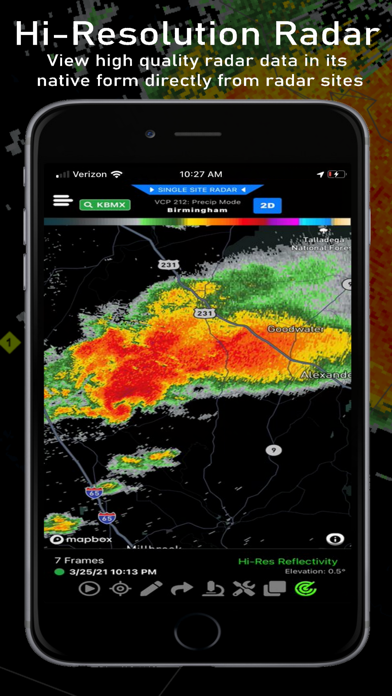 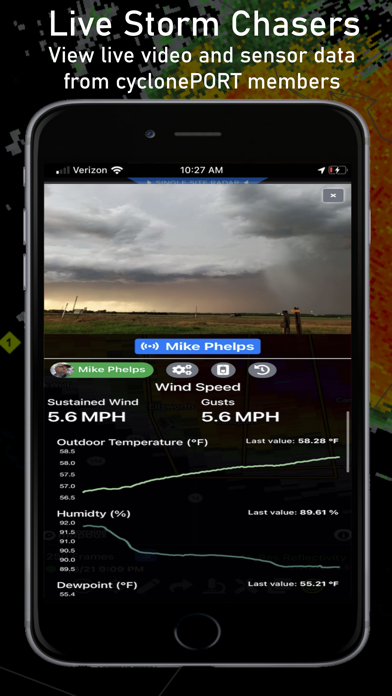 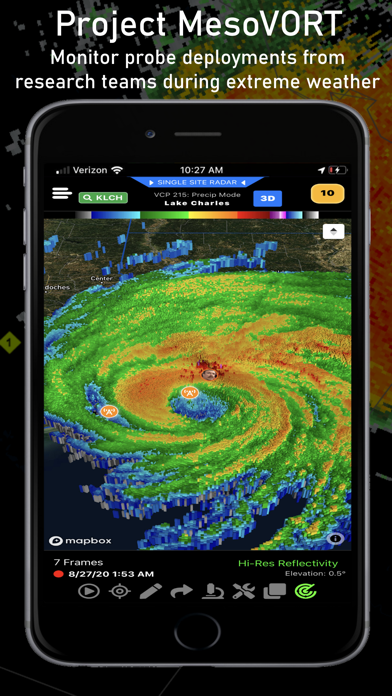 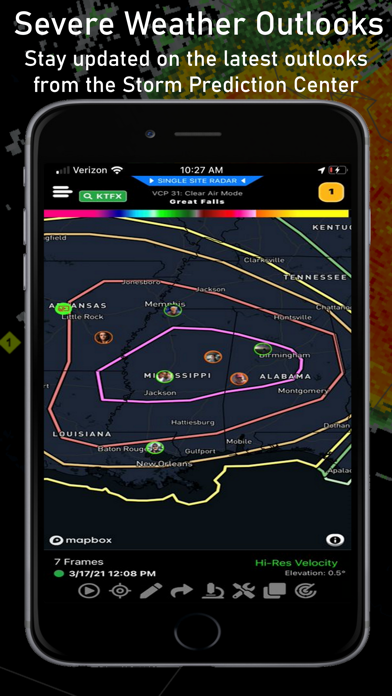 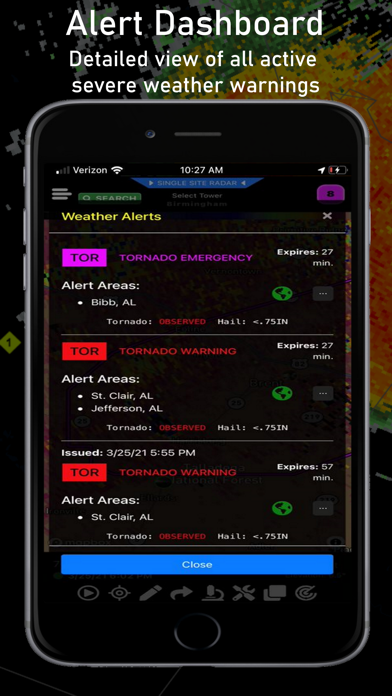 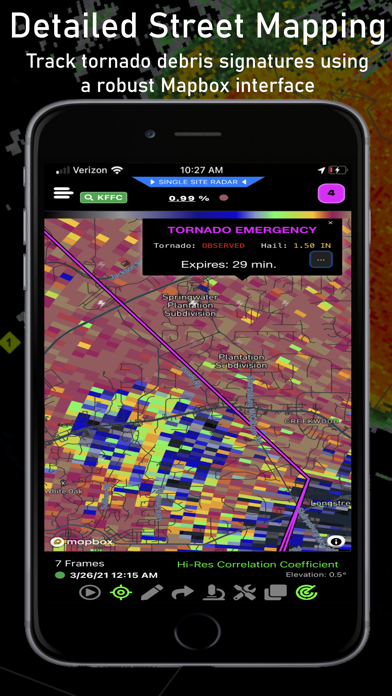 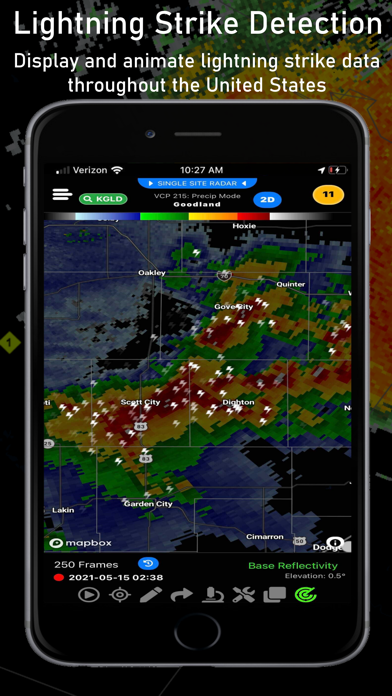 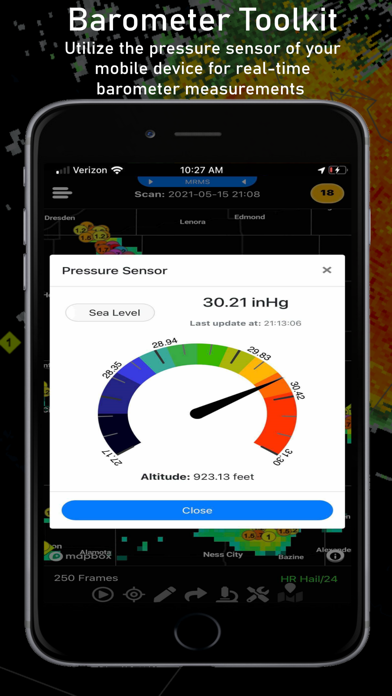 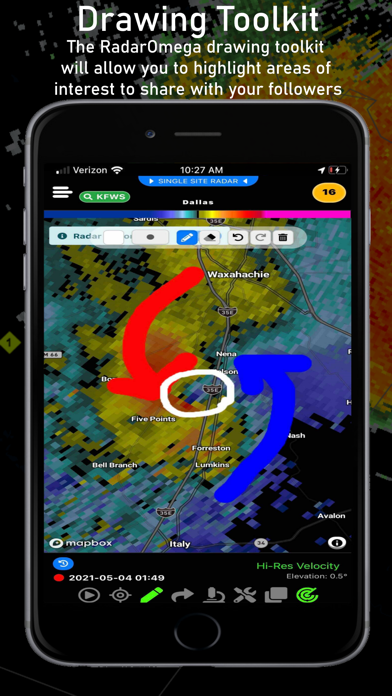 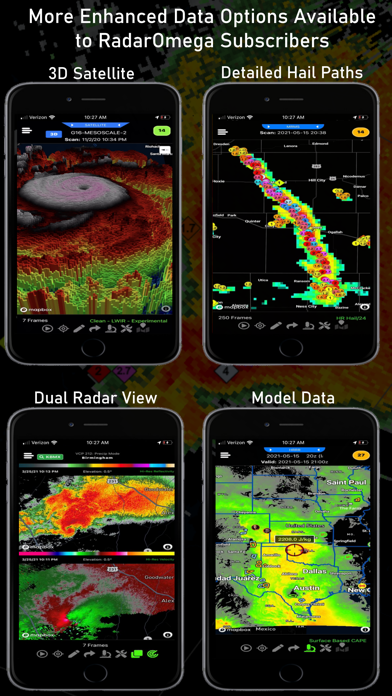 I’ve been using radar scope for many years now, and it’s been a blessing. Having that kind of info makes me geek out hard😀 I discovered this app today and WOW. What I had been wanting with radar scope is all right here. A+
By jakaoanananaosns

This app has some awesome features that make it superior to RadarScope IMO, but it does a number on my 12 pro max battery.
By wx_matt

I would not recommend

I am extremely disappointed in this radar!! It does not have future radar which is available on most free weather apps. This being a paid app relatively expensive paid app you would think it would have future radar.
By ctg777

This is the best weather app so far in the AppStore.
By albert10222

I love this radar and it has so much more than a normal radar which is why it is worth the price. I just wish there was a way to have a dual pane mode to see velocity and reflectivity.
By blobfish43

Ryan Hall recommended this app on his YouTube channel, so I bought it. You should sponsor him. He’s awesome.
By robinslick

This app rocks, it’s got a great set of feature available for free which normally are paid on other apps. I remember downloading this app when it was just becoming popular and disliking the UI as it just didn’t feel mature and very cluttered, but it has grown since then and is very user friendly. Subscription prices are very fair and offer tons of advanced visualization features like 3D GOES and NEXRAD imagery. Excited to see what other features come to the app.
By iPodluvah

Is this the storm ive been looking for ?

A few years ago,Weather underground made an application called storm radar. The weather channel bought weather underground and killed the storm radar calling it an upgrade. So far, this is the closest app that gives me the data that storm radar did and has a lot of options for those that are interested in weather. It would be awesome to see a few of the additional things built in storm like the simulated live radar mode, switching between satellites and being able to add fronts and other items to the map. Nice work on this app!
By Pjm315

With recent updates, whenever the app is opened, music that is playing through the phone is paused. Please fix with update. Otherwise, love the app!
By Deathcorejunky