■ Explore the Unexplored In the year 211 of the Imperial Era, a new continent was discovered. Explore its every last corner as a colonist of Antoecia, while living your life to the fullest in the city of Erebia. ■ Features "• Character growth through everyday work Build your strength as a warrior performing manual labor, or hone your magic skills as a secretary transcribing powerful codicies. With over 20 job classes and more than 100 types of work for those jobs to perform, how you grow as a colonist is entirely up to you." "• Strategic Expeditions Choose what limited rations, items and camping gear you can pack in your bags as you leave the saftey of the city to confront the unknown. You'll battle monsters, bad weather, and food spoilage out on the various frontiers of Antoecia. When the going gets tough, will you press onward, or retreat to explore another day?" "• Innovative Battle System Introducing a twist to the traditional job-and-ability, turn-based battle. Work together with your allies to exploit the three CHAs: CHANGE your foes' conditions, build up a CHAIN of attacks and sieze your CHANCE at inflicting heavy damage!" 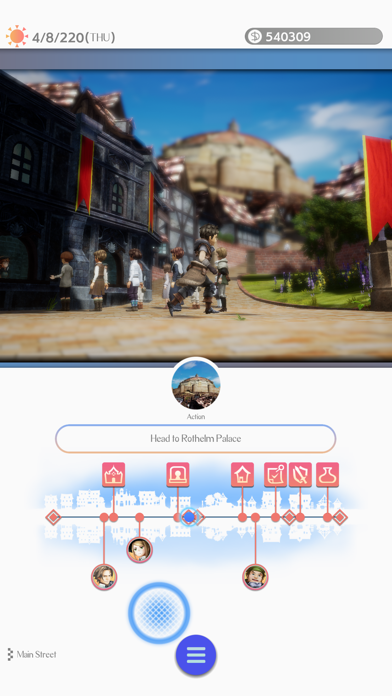 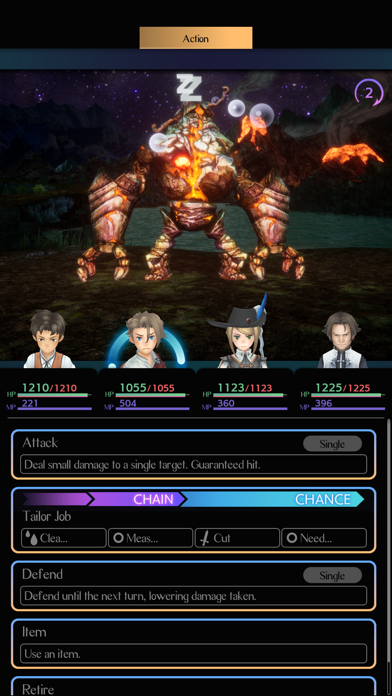 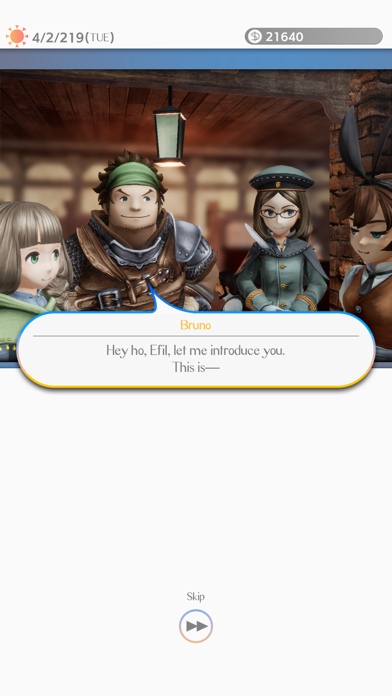 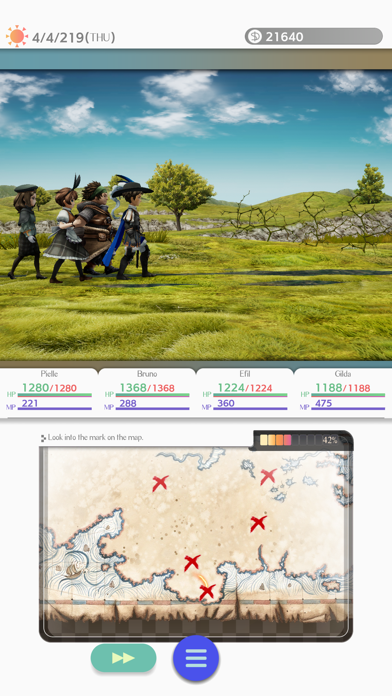 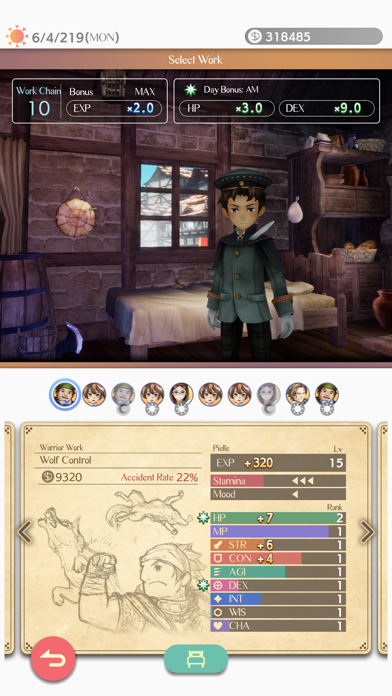 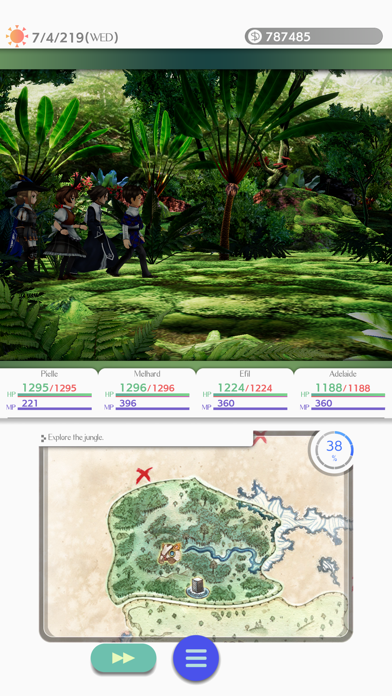 The major aspects of this game aren't bad; the music and artstyle all portray a casual but relaxing game. However, there are certain things included in the package that break the experience and distract from enjoying the actual game. Most notably is the ridiculous UI design. For the iPhone and iPad, there is so much unused white space that I thought the game was broken! The Mac version isn't an improvement either, as the interface for user selections is both awkwardly offset and tiny. The developers didn't even bother to scale it proportionally to the well-sized, center dialog box. Moreover, even though there are a great amount of character animation and expression, bloom effects, and depth-of-field bluring, the game lacks anti-aliasing (despite being made in the Unreal Engine). These alongside the occasional typo/gramatical error, it feels like a game made by both a passionate developer and a random guy working just for the paycheck, each contributing half the content for this game. Even though this game is filled with interesting things, the nonsensical roadblocks and annoyances don't make it worth the while... even to review the gameplay.
By QJ.js

Once I leave the app for a second it resets

I actually like this game. Probably once of the best time management games I played on mobile. Once thing that I hate though is that whenever I get a call, or wanna send a quick text and come back to the game it resets and I lose all my progress up to the auto save point which is very frustrating. I can’t help that I get calls and texts at times and I have to leave the app for a second. Please fix!!
By KingMisterJayJay

Various Daylife takes a little while to get off the ground. The game is serviceable with a ok core gameplay loop of doing jobs/questing/story and the characters being relatively two dimensional but more personality then some movies and tv shows I’ve seen. My biggest issue was how little is explained in the game. I run into issues where I can’t tell if I did something wrong or I hit a bug. For one, using an incense at night is supposed to restore all your hp and mp. On longer quests the constant HP drain and the fact that any food you bring will spoil makes using an incense very helpful. Yet anytime I set up camp and use one the time forwards to the morning and no hp or Mp is restored even though the item has been used. Or in another case I got a bag upgrade to bring more items on quests but there’s no way to equip the bag and my slots have stayed the same. The story can also use some work. You are a colonist sent to a new world to tame it. As you do you have one main mystery about something only your characters can seem to do and a few smaller mysteries about the greater story but, 17 hours in I just keep getting people acting mysterious and not much explanation as to why I would care about the overall plot. Overall I say the game is a worthwhile play if you want something fun with a moderate story that you can play while doing other things.
By Deganveran

Fun, but vertical only iPad kills it

The game looks really good, and seems like it has a lot of potential, but the lack of a horizontal option for the iPad kills this game for me. It’s a real shame, too, because this game looked like it could have been one I played a lot.
By Blake770

It has a horizontal mode

Quite a few reviews have mentioned disliking the large white space at the bottom of the screen. If that is the case for you I highly recommend trying the horizontal mode. To to CONFIG at the home screen SCROLL DOWN and check the box that reads HORIZONTAL under screen orientation. It didn’t hold my attention personally, but I think JRPG fans should give this game a try!
By The Mob Seafood

A JRPG the smartphone era was missing

Since smart devices began to port older-era JRPGs, something seemed to be missing when translating JRPG UI to the touch screen. THIS game is that missing link and is such a breath of fresh air. So many good things to say about this title. Some highlights: • Square-Enix quality story and ecosystem/battle system • Distinctiveness in terms of design (as others have pointed out, Bravely Default fans should definitely apply) • Characters are extremely likable and well-localized without missing the Japanese charm • Fun both as a one-handed phone break and as a full screen treat (on Apple TV) reminds me of a Nintendo Switch game in that respect
By sharptoothhh

Initially Fun But Gets Too Grundy

I enjoyed this game for a little while, but the work/stamina/explore became very repetitive and grindy. It started feeling like work and not fun. I reached level 12 on my main character and then stopped playing and deleted the app.
By Ahsen74

I wish I could make the interface black the entire time, instead of burning holes through my eye sockets everytime it’s daytime in the GAME
By Reaper4337

The way party members level-up needs to be changed. The party does not gain experience points from battles, which means the majority of grinding is done in town on day-jobs... which is realistic, I guess, but keeps the player from the fun battle mechanics and dungeons, the best part of the game. If characters can level up from battling, this game will be the highest-quality JRPG on iOS.
By patlove360

I love this game SO MUCH! It is creative, fun, and unique. I only have one concern: the character options. I am a girl, but all the options are boys. I hope you can fix that soon.
By SoonerGirl2