Life is stressing you out? We know a way to keep you sane! Tease your senses with over a hundred triggers designed to relieve stress and anxiety. A perfect distraction to escape the dullness of reality and dive into a sensory paradise. TeaseEar is based on ASMR — the most progressive relaxation method that leaves meditation and white noise far behind. HOW IT WORKS 1. Choose a texture 2. Touch the screen. You can tap, slide, and even scratch. Let your fingers loose! 3. Listen to the soothing sounds of the most pleasant textures and relax. You’ll find 100+ textures that emulate a realistic tactile experience. OUR FAVOURITES Yogurt – a classic creamy texture mixed with raspberry jam Honey – jelly-like, amber-coloured thingie Confetti – tutti-frutti merry-go-round New slimes every week! Want to create your own virtual slime? It’s easy-peasy! And FREE! Simply choose the foundation, add consistency agents, decorations, and set a vibration level. Voila! Your custom slime is good to go. SUBSCRIPTION PRICING AND TERMS TeasEar offers auto-renewing subscription options for "Premium TeasEar Features": $9.99 - per week (with a 3-days trial period) $24.99 - per month (with a 3-day trial period) The "Premium TeasEar Features" subscription allows you to get access to all the triggers, and features. These prices are for United States customers. Pricing in other countries may vary and actual charges may be converted to your local currency depending on the country of residence. Payment will be charged to iTunes Account at confirmation of purchase. Subscription automatically renews unless auto-renew is turned off at least 24-hours before the end of the current period. Account will be charged for renewal within 24-hours prior to the end of the current period, and identify the cost of the renewal. Subscriptions may be managed by the user and auto-renewal may be turned off by going to the user’s Account Settings after purchase. Any unused portion of a free trial period, if offered, will be forfeited when the user purchases a subscription to that publication, where applicable. Read more about our terms and conditions here: Terms of service: http://facemetrics.io/terms-app Privacy policy: http://facemetrics.io/policy-app 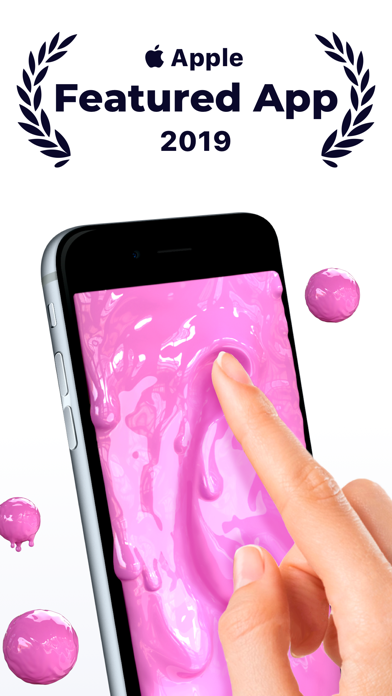 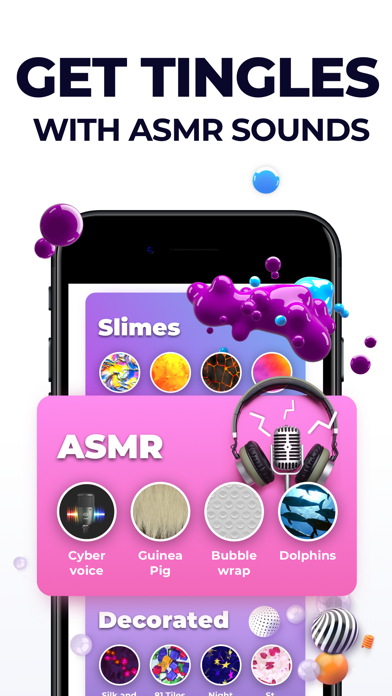 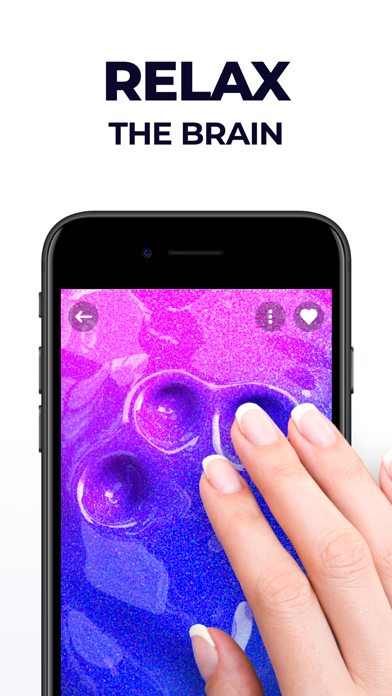 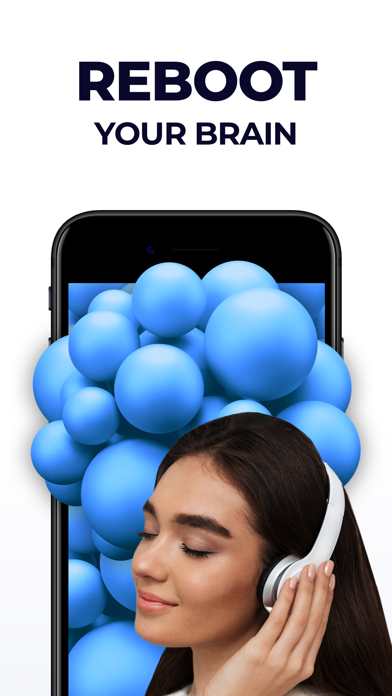 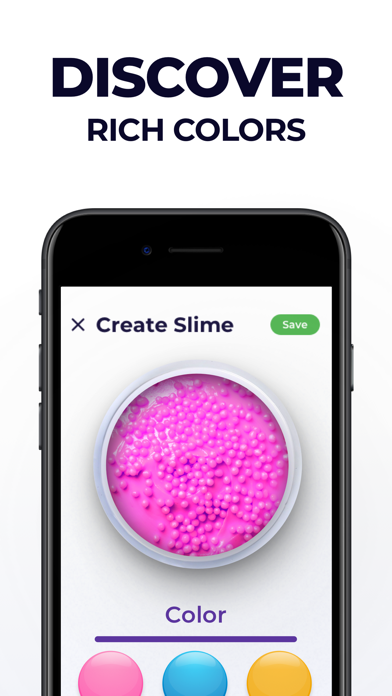 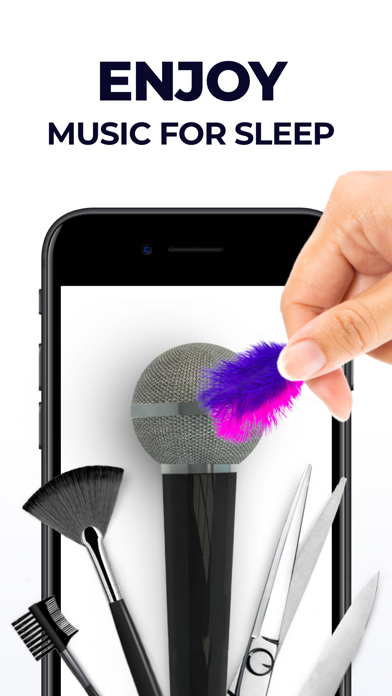 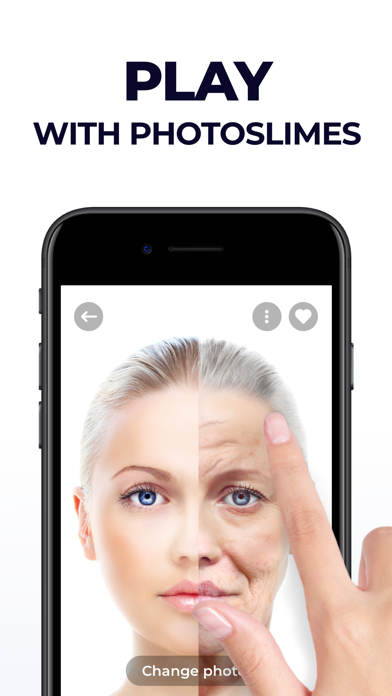 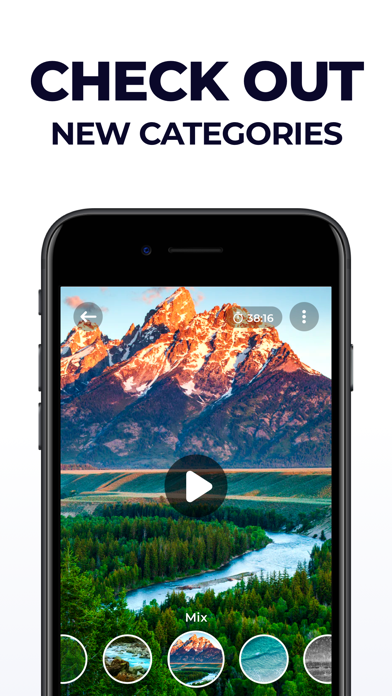 The noises didn’t match what slime sounds like at all and the male voice was super creepy. I didn’t feel relaxed at all. The slime looked like flesh and it was gross. I don’t like this app at all.
By princesspants105

This app is great because I love ASMR but the reason I gave it four stars was because you should not have to buy or watch thing to have to play with certain items.
By girl/black

My dad first saw this app on social media and he knows that I love slime so he got it for me ,and I love this app it is awesome it is really fun and good for anyone who doesn't like the actual feeling of slime, but I don’t really like the VIP thing I don’t like apps that want you to buy things.
By MrsArtB

Okay, so I like this app! You don’t need to pay for the subscription guys, you can invite your friends! The sounds are amazing. But some of the asmr features are terrifying. For example, the whisper and the male voice. Some of the scariest stuff I’ve heard. The app could use some work though. The strawberry and the ale are kind of gross looking. And the slime isn’t really slime... It’s also kind of bright... It hurts my eyes sometimes. The sounds are sometimes off though, especially for Sweeties. I don’t think it would sound like that. I personally like the pigment slime and the blue textile. Don’t even get me started on how much I love Silk and pearls though. Silk and pearls is by far the best sound ever. Okay, moving onto the make your own slime. There’s not much to it. On another game called super slime simulator there is a giant collection of slime materials you have to collect. I really want something like that in TeasEar. But for the love of god REMOVE THE VOICES. It’s really scary. Edit: I saw that you improved the sounds! The sounds felt the same, but now that they’ve released this update, they all feel different.
By ConcernedReviewer912

THIS app is amazing al though it could be better but it’s a good realaxing!! App 10/10 would recommend you :3 to get this app you can even change how slimy wou want it so I would recommend this app
By mini cookie fan123

It is a waste of time it’s not even satisfying when you touch it.
By Tfxsgsfsyf