It’s time to experience the magic and wonder of Harry Potter games like never before! Prepare to cast spells, outsmart challenges, and celebrate the whimsy of the Wizarding World while becoming enchanted by incredible magical Match 3 matching games for your mobile device! Prove your Match 3 skill by beating levels to upgrade and unlock new spells and magic abilities which will aid your quest to conquer more difficult Match 3 puzzles in this Harry Potter game. Get a chance to upgrade your spells as you prepare for the magically mischievous Match 3 challenges ahead in these free puzzle games. As you progress in your Match 3 adventure, unlock classic moments from the films, including Harry, Ron and Hermione toppling trolls, Fred & George playing pranks, and Hagrid taking care of his magical creatures at Hogwarts! Learn more about the wonders of the Wizarding World and Hogwarts as you collect magical creatures that will aid your Match 3 puzzle solving! So get ready to ‘swish and flick’ your way to a magical journey of your very own in a whimsical Match 3 game! o Solve Match 3 challenges featuring the original Wizarding World characters from the Harry Potter films! Develop your magic skills by progressing through innovative Match 3 puzzle play where you’ll master Spells. Enjoy an endless array of Daily Events that continue to delight and surprise even very adept Match 3 puzzle experts as they make their way through matching games for adults. o Level-up Your Abilities: Earn experience points throughout the game to increase your level, unlock rewards and gain magic abilities that assist you in overcoming each new Match 3 puzzle game. o Unlock & Upgrade Spells: Use Spells to beat Match 3 puzzles by obliterating obstacles and removing hazards. For example, cast Wingardium Leviosa to move objects out of your way in these top rated games. o Celebrate the Magic of Harry Potter: As you solve new Match 3 games, celebrate the most memorable moments from the Harry Potter stories in this strategy game. Along the way, the Daily Prophet will keep you up to date with Harry, Ron and Hermione on their epic journey at Hogwarts in this fun game! o Play In Clubs: Games are always more fun with friends! Unite with other players in your club to climb the leaderboard. Taste sweet victory as you work with your Clubmates to win collaborative challenges! o Amass Glorious Collections: As you progress in your tile-match mastery, you'll gain a collection of marvelous Wizarding World creatures that aid you in solving challenging Match 3 puzzles. Beat these puzzles for free to build on your collection and receive a marvelous creature that will deliver benefits that directly assist you as you solve challenging Match 3 puzzles in these fun free games. o Enjoy Daily Events: Take part in fun games and exciting events every day with these awesome Match 3 games! In these free match games, celebrate characters’ Birthdays, and upgrade spells to experience the best game as you witness a multitude of magical Harry Potter moments! With so many ways to play, you're sure to enjoy Harry Potter: Puzzles & Spells! And as always, you're able to play these games free! Enjoy top rated free games, match games and other brain games by checking out Zynga games: where the best games are made! ADDITIONAL DISCLOSURES For specific information about how Zynga collects and uses personal or other data, please read our privacy policy at https://www.zynga.com/privacy/policy Use of this application is governed by the Zynga Terms of Service, found at https://www.zynga.com/legal/terms-of-service The game is free to play, however in-app purchases are available for additional content and premium currency. WIZARDING WORLD, HARRY POTTER Publishing Rights © J.K. Rowling. HARRY POTTER: PUZZLES & SPELLS, PORTKEY GAMES, WIZARDING WORLD and HARRY POTTER characters, names and related indicia © and ™ Warner Bros. Entertainment Inc. (s21) © and ™ Zynga Inc. All Rights Reserved. 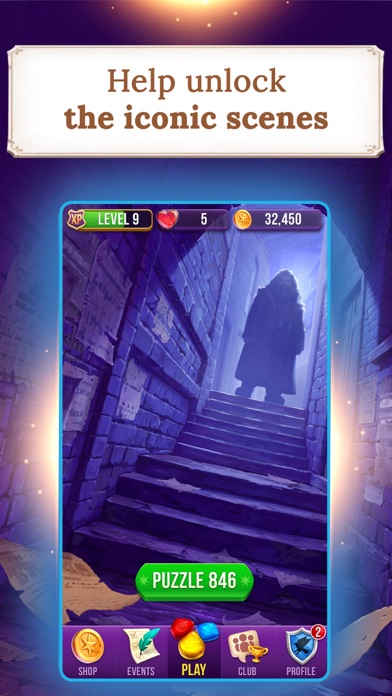 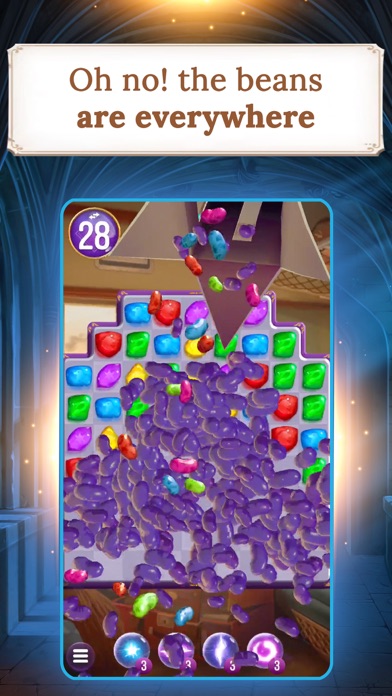 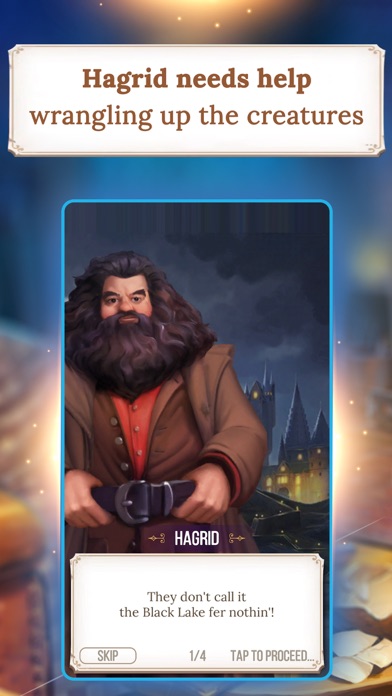 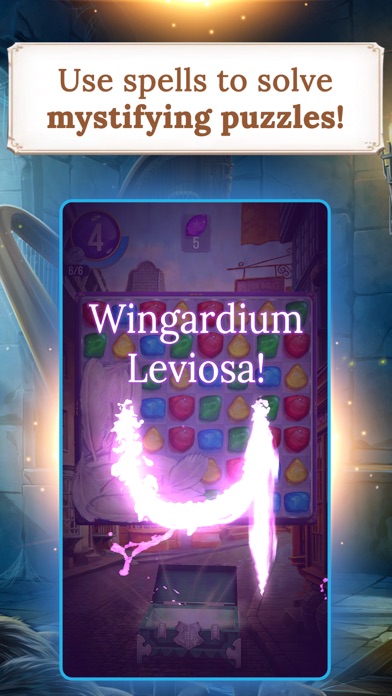 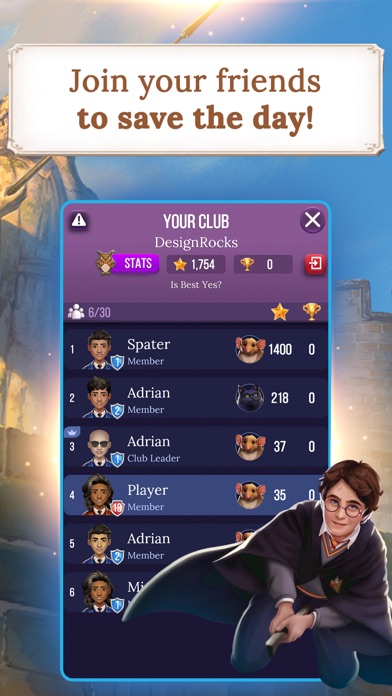 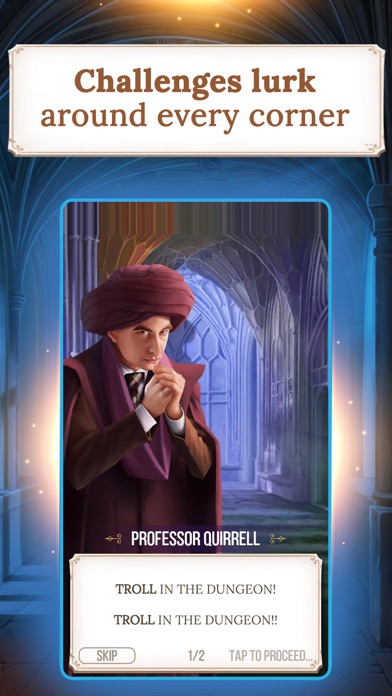 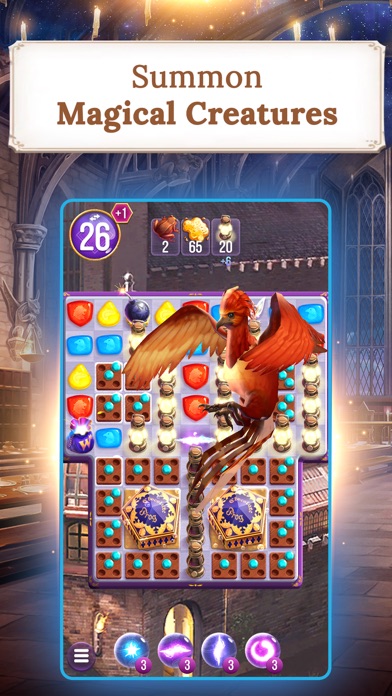 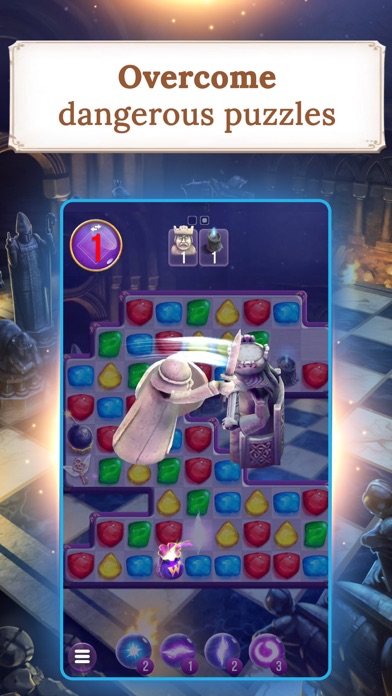 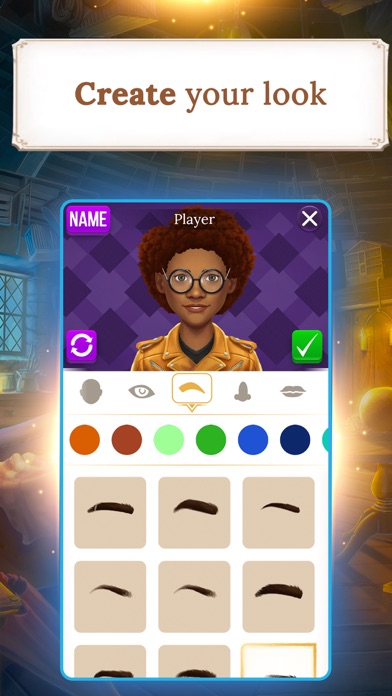 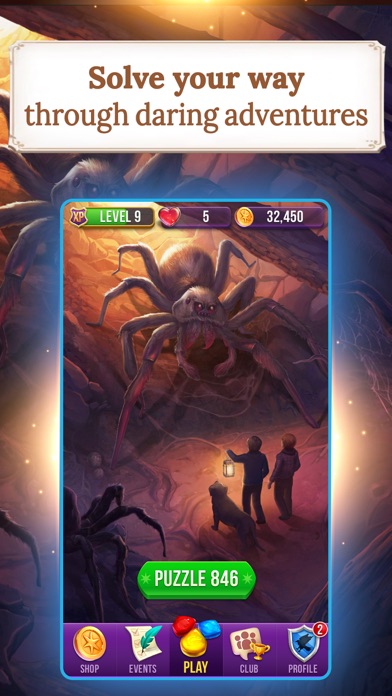 Locked out of house celebrations

I have been playing this game for many months yet for the last 2 weeks I have not been able to participate in the house celebrations with the prizes or the owl post. Is anyone else having this problem ? I play every day and Zynga can’t seem to fix this problem for me
By dicebutterfly

Like most matching games, the higher up you get, the harder it gets, which is fine. But, it seems like since the last update I get stuck on levels for 20-30 rounds before I can finally move on. The one I’m on now, I’m still stuck on and it’s been something like 30 rounds. This impacts my ability to get new creatures and team events like the Weasley prank boxes, which I just hate anyway. If I spent money, I know it would move a little easier, but I don’t want to spend money on this game. I think the algorithm responsible for moving the spells is also designed to cause frustration when stuck as well. For example, the keys picking stupid things to clear instead of tasks needed to achieve the level, or not getting the bonus item when I should, for example not getting a bomb when I match enough tiles, etc. I don’t know if it’s buggy or they’re just trying to make you spend money, but lately I’ve been more and more frustrated which takes away from the fun concept of this game.
By Kristy_Y

I like this game but the option to watch a video in order to get three more moves is broken.
By DebTechTeacher

Ads but no rewards

There’s ads that you can view which should provide a reward but too often (1 in 3) the ad doesn’t provide the reward. The screen returns to the game with End Game as the only option. This is a money grab issue and it detracts from the game play. I’m not playing as much as a result.
By AZ_DUCKY

Okay so, if you are going to download this game please read. 1. Great game. If you like candy crush or hate it, it’s exactly like that. 2. WiFi. This game requires WiFi only if you want rewards. If you just want to play the game, then no, it does not require WiFi. All you have to do is press the x button when it asks you for WiFi. It gets annoying but that’s what yo7 have to do.
By §Virus finder§

Just lost $50 after the game glitched and wouldn’t open. A week later and the game loads, everything is lost, rank, money, everything.
By Aamun

This is the best game. I love it
By yifuilyouyuo

Well built but cards are a problem

I thoroughly enjoy the game. Typical gem matching game with so much Harry Potter magic weaves in as to be a unique experience. That said, I have to say this. The Card drop rates are criminally bad. As you progress, you can collect cards that - if you collect an entire set - you unlock magical buddies. Great concept. Execution is terrible. I have opened conservatively 12 packs in the past week (each pack comes with 3 cards). I am not exaggerating at all, there are only two cards that have appeared at all in those 12 packs: a wolf and a goat. Those two OVER and OVER again. This is not the first time the card drop rates have been atrocious, but it has reached a brand new terrible level. The game itself is fun, but the devs are trying to cap progress apparently. This issue won’t stop you from playing at all, but leaves a really bad “artificially extending playtime by being unfair to players” vibe to it. 5 stars if this is fixed.
By Chris while driving

This game is delightful. It is well-maintained, they have events often and they are creative and fun and varied, you can collect pets, the design is superb, and I have never had an issue with the game working. My only complaint is that I really want to see more customization options for my character. This is a huge miss IMO, as backgrounds, glasses, hairstyles, and shirts could all be earned by leveling up or doing events or other achievements! If character customization were improved this game would be absolutely perfect!!
By iridaceae

Magical Animals are hard to get

I love this game however, I almost always get duplicate cards in the star card packs and when I finally get a duplicate pack it goes towards the newest magical creature rather than the 5 I’ve been waiting to unlock for months and have actually bought brilliant bundle packs for and not gotten. Please adjust the algorithm on the star pack so I do not constantly receive duplicates and can unlock creatures or provide the option to purchase creatures.
By JuustKeepinItReal