Our *classic* Swackett app lovingly recreated for 2020 using SwiftUI. Requires macOS Mojave or later. • As seen on the TODAY Show (NBC) • Apple Selected "New Apps and Games We Love" (June 2018) • The #1 weather app for the Mac in 55 countries (June 2018) A different kind of weather app. • How warm or cold will it be today? • Will it rain or snow today? • Will I feel comfortable outside today? • How windy will it be today? • What should I take with me when I leave the house today? Swackett has been answering these questions for you — visually — at a glance — with beautiful, clear imagery since 2010. Swackett presents thoughtfully crafted people symbols (called “peeps”) who always appear appropriately dressed for the weather; plus beautifully crafted weather data displays, charts, satellite imagery (where available) and other visuals to present your weather forecast with humor, precision and clarity. Privacy Policy https://sweaterjacketorcoat.com/privacy Terms of Use https://sweaterjacketorcoat.com/terms 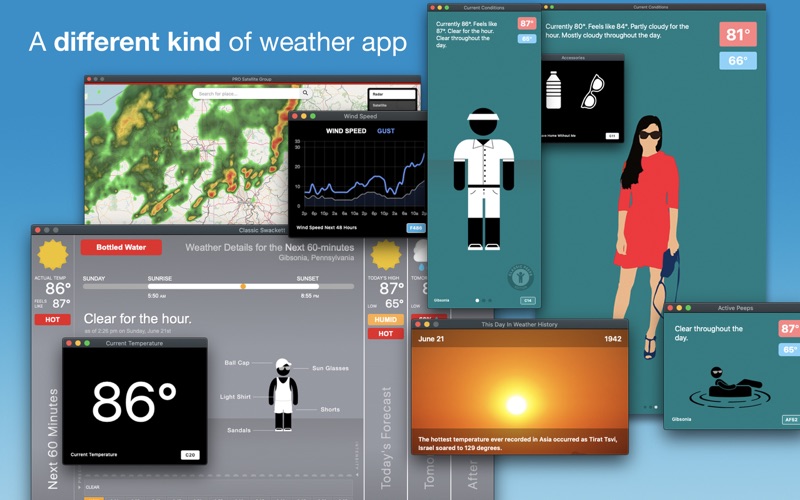 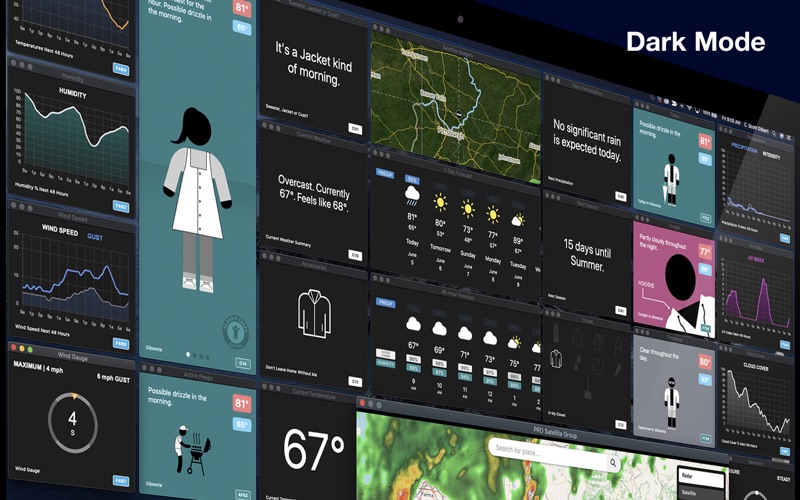 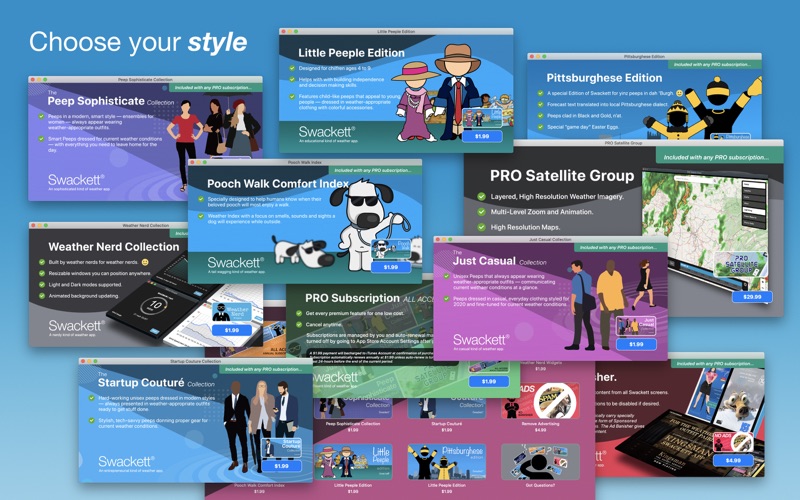 I am glad I was not put off by the negative comments. The interface is well thought out (very good looking as well), the auto location works correctly and the data is accurate for my location (Houston). It provides a wide array of data in a format that is easy to navigate. I am a weather fanatic and use several apps on my iPhone and iPad but was having a hard time locating a nice app for my new Macbook Air (I have finally abandoned chromebooks for a real computer). After trying several apps and not really liking any of them I paid the $5 for Swackett and, hooray, my search is over.
By Imhotep VII

It really works!!! This is a fine app!

After much struggle ans frustration I can now report that Swackett is really amazing. With Supports persistence and my final willingness to allow my addled mind to learn, I can reort now that Swackett is 100%. I do wish the setup for the custom location was a bit easier to grasp but it does work. My apologies to the Developers and to all for venting my frustration...but in he end all worked out. Ilook forward to version 6.
By Great Southern Bear😎🤔

I wrote a review on Friday of last week, entitling it, "Trash & Rip Off." Your team responded, so I thank you for your response but you do not address the issues I raised: 1. At the ticket page, though I did initially register, it will not recognize my password nor when I request, you do not send me the link promised. 2. Therefore, I can not submit a ticket. 1. You did not tell me how to "fix it" so it would not be in a constant issue of being "Over Capacity. The system is temporarily over capacity. Please try again in a few minutes," which is the message on the opening screen.
By dwatkins7

You can view weather from your coordinates only. No customization of anything, regardless what the docs say, nothing, absolutely nothng works. Total waste of money, I cannot believe they let this on the App Sore. Would have given zero stars but that is not possible. ust terrible.
By that needs a nickname

My two star rating will stand. The best thing I can say is that this is a funky app that can make checking the weather a bit more interesting. Currently, the app is listed for $4.99 USD. When I first downloaded the app on a brand new computer I was met with a black screen. It’s 2019 and apparently you still have to reboot to make some software work, ok, I know that…I’ll own that one. I did contact support about it and they advised me to do the ‘ol “turn it off and back on again,” thing. Good. Fixed, no black screen now. In my last review I noted there was no radar as advertised. The developer responded stating that there are “three radars.” I can see what they are talking about from the screen shots in the advertisement. There is SUPPOSED to be radar(s), however I have none. As I type this right now, there is still no radar feature with my purchase, regardless whether there is supposed to be or not. It’s just not there. Second, when the app opens it does not fit to the screen properly. What I mean is, the app opens in windowed mode. I’m fine with that. However, there is a slight scroll to the right needed in order to access the hamburger menu which opens the GPS tab further right. Therefore, you have to go hunting for this feature and it’s not clearly viewable in windowed mode. It hides behind the temperature in windowed mode. Once you notice the hamburger menu and click on it the GPS feature is half hidden because the windowed mode is not large enough to show it all. To recap, when the app opens you must either resize to gain access to all features (and resize again) or enter full screen. For a paid app either open in full screen or size it correctly. It’s just clunky. Finally, if I’m going to nit pick, the GPS locates me in a town over. I guess that’s better than the next closest major city, but still Wunderground, Wether Channel, and Weather Dock (app) all find my hometown just fine. I use the current city location, and I manually put it in. Manually, it finds me fine. I will contact support with my issues. I imagine they will be attentive and responsive to me. However, these are issues that a polished app shouldn’t have to have someone contact tech support to get fixed. I’ve seen other reviews that said they were missing some features and after contacting tech support the issues were resolved. Again, that isn’t standard to need to contact tech support to gain access to features from a paid app. I’m not looking to be overly critical. I bought this app as I thought it had everything I was looking for. I don’t mind supporting good software and good enineering. However I felt the developer response to my last review, which unforteunately I couldn’t edit, was over the top and in effect called me a liar about the radar not being present. I certainly have better things to do than defend my integrity on an app review. I feel like these issues need to be addressed instead of having a defensive response from the Dev team. I wish nothing but the best for this dev team and the app. I honestly would just prefer a refund than a response or a fix as this experience has been fairly negative. Thanks for reading.
By AthosN8

I purchased tis Mac app because it was supposed to have radar for tracking weather. I paid the fee and dowloaded the app to find it does not include radar.
By Air man 1092

This app is literally real trash. It's not worth a purchase. They should pay me for me to use it
By Tophey_14

It stopped working on my macbook and I submitted a ticket for support but haven't heard back. I'd like a refund please
By homestake99

It wasn't a Mojave update causing my loss of Swackett but it was thru the great developers of Swckett that I have it back. Great team - great app.
By Jas46

I just downloaded this app for $9.99 and I was expecting the Pro features but where are they? No radar, which is really why I downloaded the app in the first place. I’M NOT PLEASED!! What’s up with this? I’ll be looking forward to an explanation of some kind very soon!! OR REFUND MY MONEY!!!
By Fitbrotha