Move to the countryside, and cultivate a new life in this award-winning open-ended farming RPG! With over 50+ hours of gameplay content and new Mobile-specific features, such as auto-save and multiple controls options. **Winner of the Golden Joysticks' Breakthrough Award** **Nominee of Game of the Year 2017 - BAFTA Games Awards** --- BUILD THE FARM OF YOUR DREAMS: ■ Turn your overgrown fields into a lively and bountiful farm ■ Raise and breed happy animals, grow a variety of seasonal crops and design your farm, your way ■ Customize your farmer and home! With hundreds of options to choose from ■ Settle down and start a family with 12 potential marriage candidates ■ Become part of the community by taking part in seasonal festivals and villager quests ■ Explore vast, mysterious caves, encountering dangerous monsters and valuable treasure ■ Spend a relaxing afternoon at one of the local fishing spots or go crabbing by the seaside ■ Forage, grow crops and produce artisan goods to cook up as a delicious meal ■ Rebuilt for touch-screen gameplay on iOS with mobile-specific features, such as auto-select to toggle quickly between your farming tools and auto-attack to swiftly take down fiendish monsters in the mines ■ Continue farming from where you last left off with auto-save (even if you close the app!) ■ Play the game your way with multiple controls options, such as touch-screen and virtual joystick ■ Newly Updated Single Player Content - Including new town upgrades, dating events, crops, fishing ponds, hats, clothing, and new pets! Plus more to be discovered... --- “The best version of Stardew Valley is the one you have with you … This game is absolutely incredible, and will not disappoint.” - TouchArcade "Stardew Valley beautifully combines farm simulation with RPG elements to create an intriguing, absorbing rural world." - IGN “Far more than just a farming game... filled with seemingly endless content and heart.” Giant Bomb "Village life has never been so accessible and satisfying" - The Telegraph “Stardew Valley has been the most rich and heartwarming experience I’ve had in a game in years.” CG Magazine --- Note: Features new 1.4 update story content, multiplayer functionality not supported. No in-app purchases. 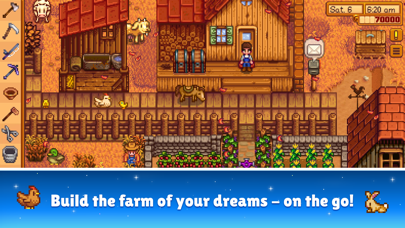 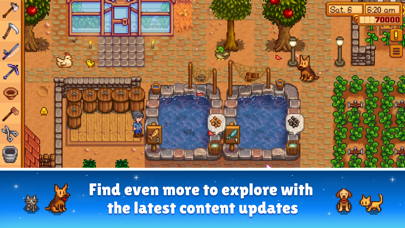 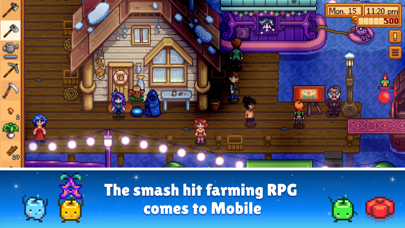 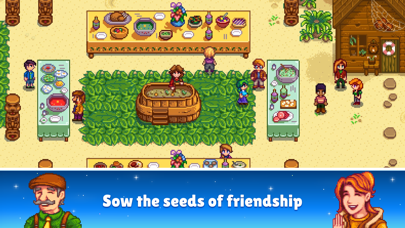 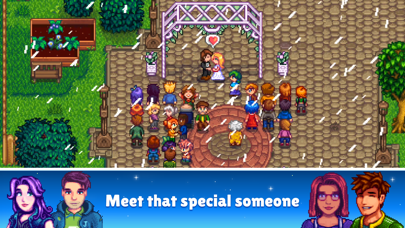 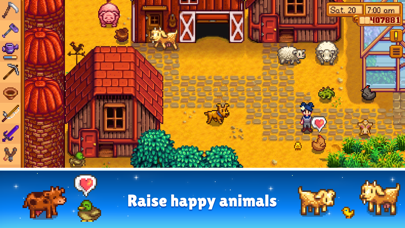 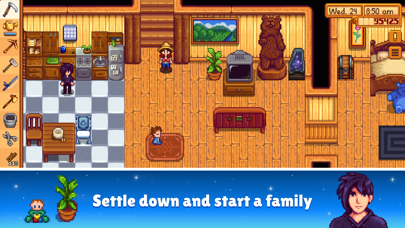 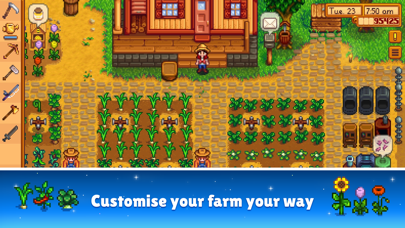 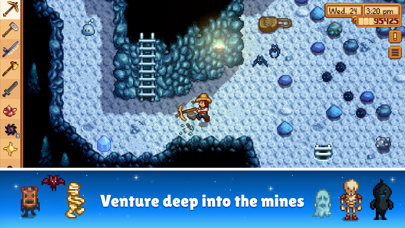 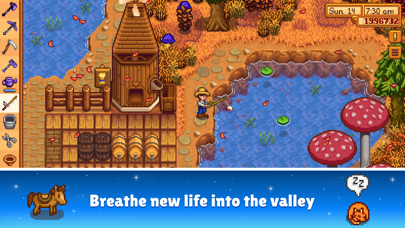 Crashing is more common after hitting hour ten of playtime, and I somehow just lost all my progress in the museum + community center. I can donate back to the museum but there isn’t even an icon for submitting in the unfinished sections of the center.
By BeepBoofMeep

Where the beach
By littlebabybutton

This game is absolutely amazing :)
By JC👌👌❤️

i literally play this game whenever i can, i think it’s an addiction 💀 anyways yeah play this it’s the best game ever created
By anonymous weeb :)

The game is quite good and almost relaxing. But there is one major flaw that prevent “relaxation”. Flaw - no confirmation on reloading previous day, and the button is very easy to accidentally hit, it needs to be separated. Additionally: could you please implement iCloud saves, or to be able to export your saves via file sharing.
By Aleni Innet

it’s really fun and enjoyable, but i wish it had multiplayer to play with my wife, that’s the only thing keeping if from a 5 star for me.
By 3chaactername

Amazing game but some glitches

This game has filled a lot of free time on my hands. It’s really a great game except for a few minor bugs like I can’t pick up eggs on mobile when you get a coop. You can pick up most of them but there’s usually always 1 or 2 that it just won’t let me pick up, it’s annoying. Also I think you should be able to move animals away when there blocking there feeding container because they just won’t move they probably move at some point when I push on them enough but I think you should be able to speed up the process of it. That’s just a suggestion but please fix that bug I was talking about. Thanks for listening.
By Makrebee

I love this game and really enjoy playing it, but it’s basically impossible to fish on the iPad. The sensor/throttle is WAY to sensitive on the bamboo pole. It’s a LITTLE easier with the training pole but not by much. I try to avoid fishing at all costs because I can never catch anything but junk!
By stefix101

stardew valley is my favorite game, its very fun and keeps me captivated for hours BUT my favorite save suddenly got stuck on a black screen, and whenever i load its always stuck like that with the grandpa’s lullaby playing in the background. i was 3 years in when it happened and its been stuck like that for a few months now :/. i haven’t played ever since because i really dont want to start all over again
By sierra pee