COULD YOU ACE YOUR DRIVERS PERMIT TEST? Join over 250,000 monthly users on the most popular DMV practice test app. It’s fast, easy and fun. It's the only study material you need to get your DMV permit and driver license. The DMV Practice Test by Zutobi app is built like a game and keeps you motivated. When you have finished the app, you are prepared to sit the DMV Test. It's that simple. DON’T LEAVE ANYTHING UP TO CHANCE AT THE DMV PERMIT TEST The app teaches you the rules of the road using our summarized easy-to-read DMV handbook AND over 500 state-specific questions that are almost identical to the real Drivers Permit Test. LEARN TO DRIVE AND BECOME A SAFE DRIVER The app promotes safe driving and helps you learn important safety aspects of driving. _______________________________________ WHY DMV PRACTICE TEST BY ZUTOBI? • 500+ QUESTIONS IDENTICAL TO THE REAL DMV PERMIT TEST - The questions are very similar (often identical) to the real test. • SUMMARIZED DMV HANDBOOK - We’ve summarized the handbook for most states into an easy-to-read format without all the unnecessary drivel. • PICTURES AND ILLUSTRATIONS - Learn the rules of the road using real-life traffic situations to help you learn fast and efficiently. • STATE SPECIFIC - The app is tailored specifically for each US state to match the requirements of the DMV, DDS, DOL, DOT, BMV, MVA, RMV, DOR, MVC and MVD tests. • COMPETE AND WIN - Challenge your friends and see who can score the highest using fun features such as the Leaderboard. Besides glory and honor, winning over your friends also means that you’re more likely to do well on the real drivers permit test. • DETAILED STATISTICS - Easily track your progress using advanced statistics. • UNLIMITED TESTS - Take as many DMV practice tests as you need (most are near identical to the tests by the DMV), and learn from your mistakes through detailed explanations. • STUDY OFFLINE - No internet connection is required once all the data has been downloaded. _______________________________________ GET STARTED TODAY AND GET YOUR DRIVERS LICENSE Download today and start your journey towards learning all the rules of the road and acing your Drivers Permit Test! Once you have finished the app, you will feel confident as a driver. ARE YOU A DRIVERS LICENSE HOLDER LOOKING FOR A REFRESHER COURSE? The Zutobi app works just as great for current drivers license holders looking to freshen up their knowledge of the rules of the road ADDITIONAL INFORMATION Read more about the app on our website: https://zutobi.com/us _______________________________________ Zutobi Plus subscription - Zutobi Plus includes full access to the specified course for the duration of the subscription period - All prices are subject to change without notification. Promotion prices and limited-time opportunities may be available for qualifying purchases made during the promotional period. We are unable to offer price protection, refunds or retroactive discounts for previous purchases in the event that we offer a promotional offering or price reduction. - Payment is charged through your iTunes account at confirmation of purchase - Your iTunes account will be automatically renewed and charged for renewal unless turned off in iTunes Account Settings at least 24 hr before the current subscription period ends (including the free trial period). The unused portion of the free trial is forfeited after purchase. - Your subscriptions may be managed by the user and auto-renewal may be turned off in the user’s iTunes Account Settings after purchase. However, you are not able to cancel the current subscription period during its active subscription period Our Terms of Service and Privacy Policy: Privacy Policy: https://zutobi.com/privacy Terms of Use: https://zutobi.com/terms Contact us: https://zutobi.com/us/contact 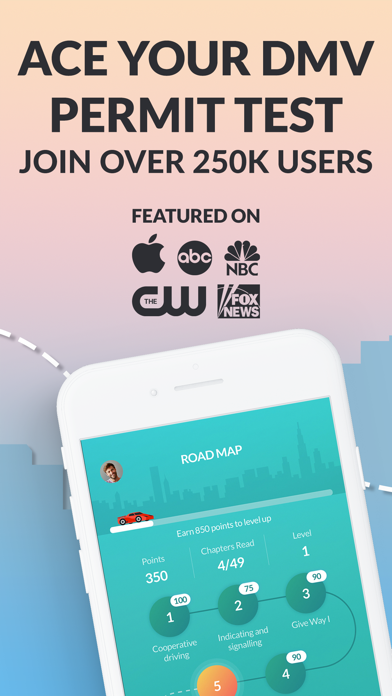 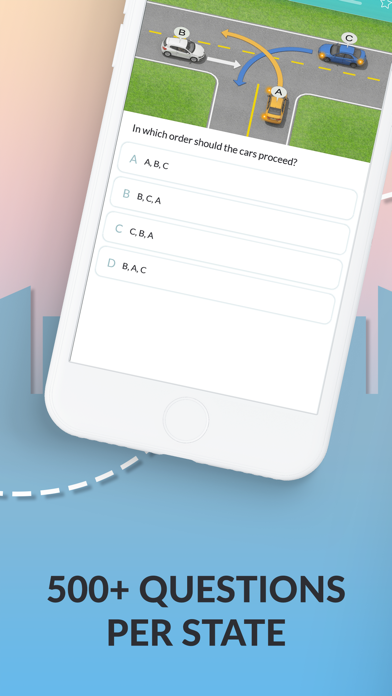 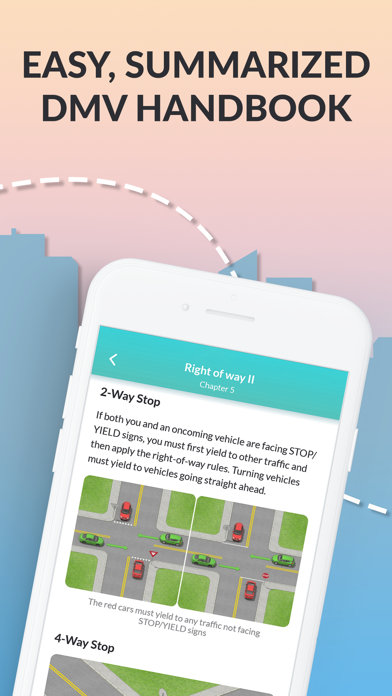 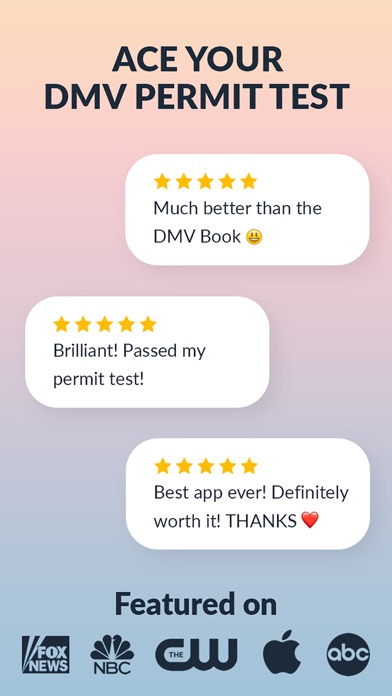 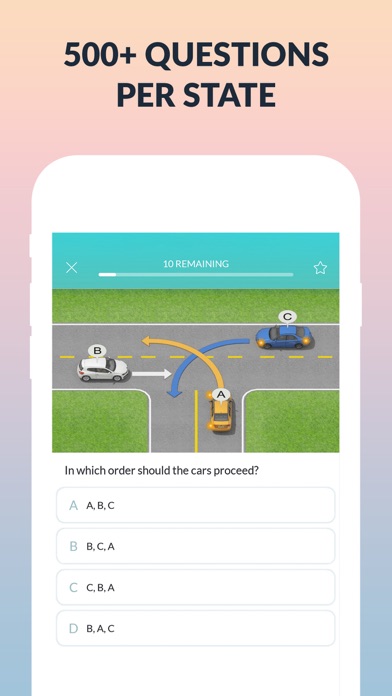 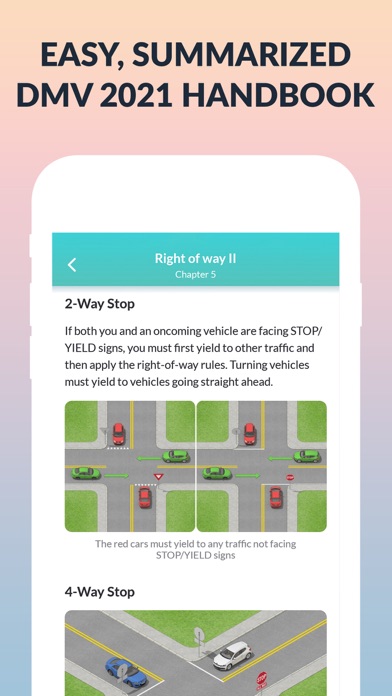 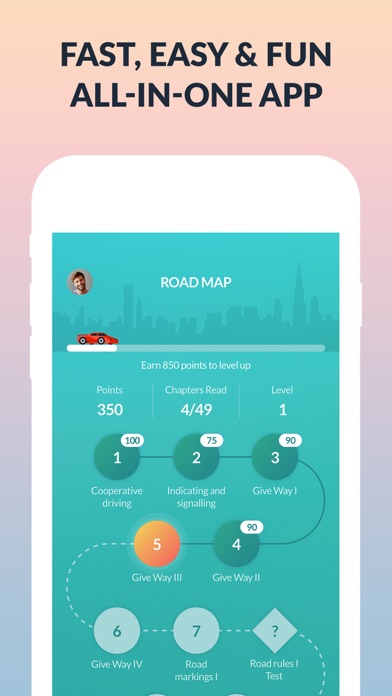 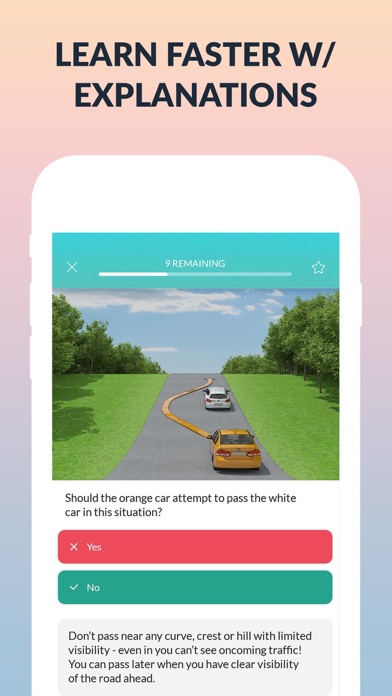 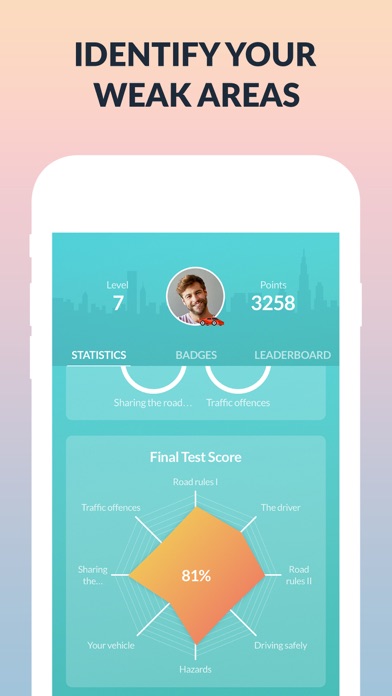 This app is poorly designed, the questions have poor grammar, and the format of the questions are terrible. Too many mechanical questions that wouldn’t be on a permit test.
By Beerchiq

REQUIRES a subscription
By sapnu puas101

I hate this app for this

If this is supposed to help you how to drive it won’t, where’s the stop signs and the stop lights how would you know which car goes first when the roads look the same dumbest game on here
By Shady jiggle

Extraordinary Free Driving Course For Everyone

I’m a 21 year-old guy that already has a driver’s license, but I just wanted to reinforce and test my knowledge. I’ve seen a lot of complaints about subscription fees, but like other great apps, the creators have to make money somehow. Plus, it’s not even that bad for what you get ($4.99/week). Personally I never paid or used the free trial, I simply watched one ad every day, and finish in just 2 months! I do, however, have a few complaints of my own... 1. One question read as follows: “You’re driving in rain just below the speed limit, and you feel that you’re driving too fast for the conditions. What should you do?” This is so simple & obvious that as you can guess, the answer was SLOW DOWN. 2. Another question read as follows: “You’re at a crash scene and there is no risk of further collisions. What should you do?” The answer is “call the emergency services, unless already done”. This answer would’ve been fine except for the last part. You should call 911 no matter what. How else are you going to know it’s already been done? By asking everyone who’s there? Not probable. By assuming? It’s bad to assume, because if everyone assumes no one calls 911. 3. Last but certainly not least: “You have a friend who has had a few beers at a party. What advice should you give him?” Answer is “Go home by public transport or taxi”. I think it’s not too bad of answer, but it should elaborate a bit more like saying “with a friend”. I wouldn’t want an intoxicated friend taking public transport alone since they are more vulnerable or can even cause him to lash out at someone else. Overall, it’s great. I scored 100% on every lesson & test (although not all of them on the first try). Unfortunately I did get one wrong because how it was worded. Oh well, thanks for everything Zutobi:)
By Tony_Baloni915

This App is very accurate and get you ready for the knowledgeable test at the DMV for any State in the US.
By edoupipo

i paid for extra stuff, (even though you Don’t need to heh) and i PASSED ON MY FIRST TRY!!!! this app works i promise you
By ABCDLOL!!

Just what I needed!

I tried many other websites to help me prepare for the knowledge test before I can across this app. This one helped me by far the best! After studying for a few days using this app, I gained the confidence to go and take the test. And passed the first try with a 93% (in Washington state) I definitely recommend this to anyone trying to pass the test. I have younger siblings who will soon be of age and they’ll use this app as well. Love, love, love!
By Fake name inserted here