“Dictionaries” is an electronic dictionary viewer app made to allow users to efficiently use various dictionaries. Our popular standalone apps have been integrated into a single app where users can search multiple dictionaries at once. Users can purchase and use a variety of dictionaries, including English, Japanese, French or other language dictionaries, from the “Dictionary Store” which can be accessed from within the app. Searches • Batch Search (Consolidated Search) allows users to search multiple dictionaries at once. • The display order of dictionaries used in the batch search can be customized. • The keyboard language switches automatically depending on dictionary search groups. • Handwriting input is possible for Japanese, Old Japanese, Kanji, Chinese, Korean, and Russian dictionaries. • Using Pattern Search, users can search for words even if a part of the spelling is unknown. Trace and Jump • Users can easily jump to not only other words in the same dictionary but other dictionaries as well simply by tracing words in a definition, allowing users to go on a journey of intellectual curiosity through the dictionary as their hearts desire. Collection • Purchased dictionaries are shown as icons on the Collection screen. • By opening a dictionary from the Collection screen, users can also carefully go through a single dictionary. Even in this case, users can use the “Trace and Jump” function to easily jump to another dictionary. • The display order of dictionary icons on the Collection screen can be changed to the user's preference. Bookmarks • Users can bookmark their favorite words. In addition, users can also efficiently categorize these bookmarks using the Bookmark Folder. • By turning on Quick Bookmark, users can quickly add/remove bookmarks simply by tapping the Bookmark icon. Search History • In History, display frequency is automatically recorded so that users can immediately recognize words they search for repeatedly. iCloud • Users can synchronize Bookmark and History data among all devices by turning on iCloud. Dark Background Colors • In addition to the standard white background color, users can also select from sepia or dark backgrounds. Dark background colors improve concentration abilities. Multitasking • Users can display websites, documents, and more alongside their dictionary by using the Multitasking function on the iPad. By turning on Clipboard Search, users simply have to copy the word they wish to look up in order for the app to find that word in multiple dictionaries. Substantial Lineup • The Dictionary Store carries a large number of full-scale dictionaries, and we plan to further improve this selection in the future as well. • The following English dictionaries are available as of March 2019. Check in the Dictionary Store, which can be accessed from within the app, for more information on each of these items. - Oxford Advanced Learner’s Dictionary 10th edition (OALD) - Oxford Learner’s Dictionary of Academic English - Collins COBUILD Advanced Learner’s Dictionary 9th edition - Collins COBUILD Advanced American English Dictionary 2nd edition - 柯林斯COBUILD高阶英汉双解学习词典第8版 - Collins COBUILD Advanced Dictionary of English, English/Japanese - Collins English Dictionary with Thesaurus Concerning Switching Over From Standalone Apps Users who already own standalone apps from Monokakido will be able to download the corresponding content for free by performing procedures to switch to the new app. All standalone apps can be migrated to the new app, including everything from WISDOM English-Japanese/Japanese-English Dictionary, originally released over 10 years ago, to our most recent releases. This app product makes use of the handwriting recognition engine 楽ひら® from PUX Corporation. “楽ひら” is a registered trademark of Panasonic Corporation. An internet connection is required to purchase content.Usage fees and terms of use may apply. 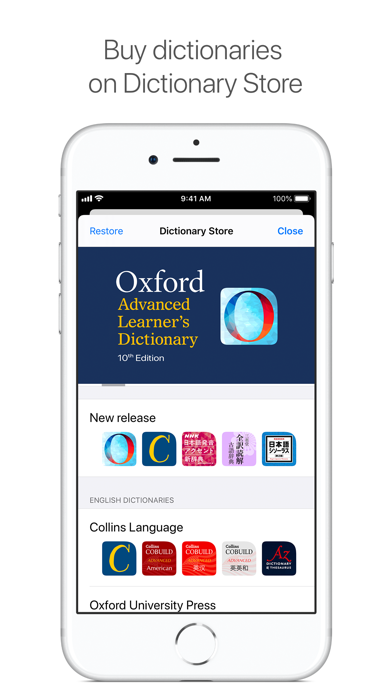 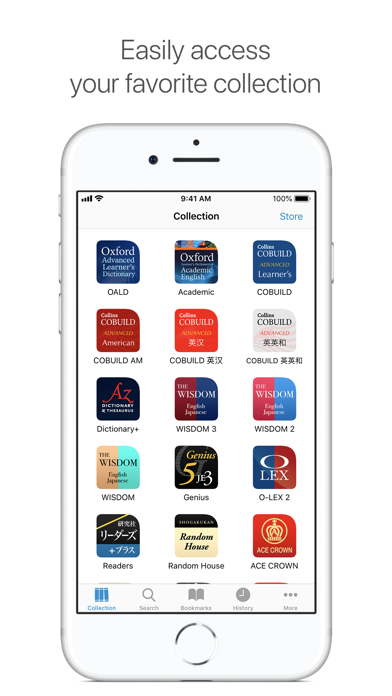 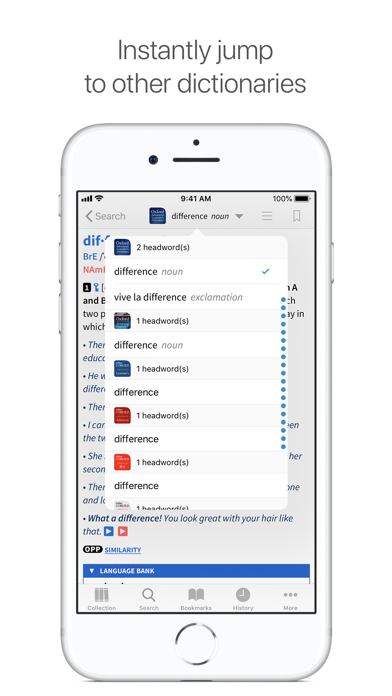 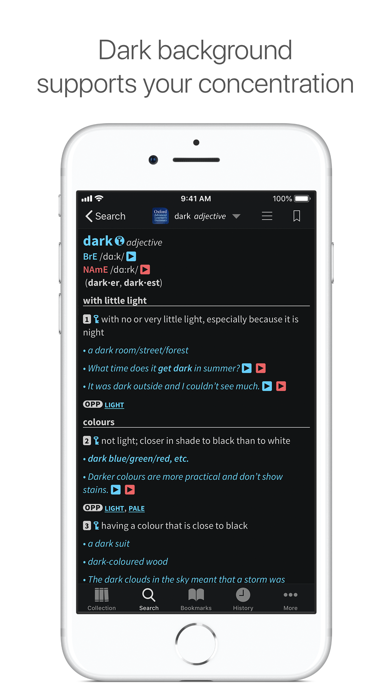 Great for Japanese, but Missing a Crucial Feature

First off, I love that this app combines multiple dictionaries in one. For me this is useful because I first look in the 三省堂 dictionary since it is a bit easier to understand and has shorter definitions. However I often have to look in a more complete dictionary like 大辞林 for more complicated things. This app lets me do that with a single search! One feature that I feel is crucial, but this app is lacking, is the option to export your bookmarks. This could help users e.g. to make digital flash cards from bookmarked entries.
By JStrutz84

Hi, I am a guy who’s currently working in mainland China. I love this app a lot and have purchased 37 dictionaries already, recently I reset my iPad and started to download the content again but I just can’t ! Each time I try to download, it says an unknown error occurred. (Btw there is a lot of storage left so I am sure it’s the app’s problem) Downloading has always worked badly .. but now it stopped working completely
By NYPSTR

Any serious student of Japanese needs a real dictionary. Jim Breen’s is a good resource but lacks the depth that is needed for serious study. Japan has a well developed dictionary market and this app unites a variety of them in one easy interface. The prices are fair for the amount of content and detail in these books. For a bilingual, Random House 英和 is actually one of the better English resources I’ve found on iOS due to its extensive etymology information lacking in most American alternatives.
By Jyuichi

A step down from Daijiren

MONOKAKIDO’s previous Japanese dictionary app, “Daijiren”, was one of the best iOS apps of all time. It carried a premium price, and it was worth every penny. Now they seem to have consolidated many dictionaries into one app, with in-app purchases for each. This probably seemed like a good idea from a software development perspective, but it’s not so great for users. The screenshots show a user with dozens of dictionaries (even though there are only 10 IAPs). But I don’t need dozens, or even 10. I need one. To make this work, they’ve essentially turned the top of your display into a dictionary-switcher, even if you only have one dictionary and thus never need to switch. It’s just another thing that takes up valuable space, and makes it easy to accidentally get “out” of the dictionary while still being “in” the app. Also, it confusingly splits the settings into two different places. I never got lost in the old app, but I keep getting lost in the new one. Even the old icon was better. The new one is too bland and generic, and just doesn’t look like something I paid top dollar for — at least, for an iOS app. Strangely, the old app is significantly cheaper than the IAP for that same dictionary in the new app. So they seem to still be encouraging users to buy the old app. It’s cheaper and better! Until they discontinue it, it’s hard for me to recommend this app. To be fair, I probably would have given this a higher rating had I not already been a longtime “Daijiren” user. They already had the perfect Japanese dictionary app, and then they mucked it up.
By Kokubu

It’s would be nice if this could be fixed, it’s the only app I have problems with on iOS 14 beta. I have two dictionaries I’m eager to use, so please.
By ChinaVirus

In the OALD 9th edition, whenever I look up a verb, the “verb forms” section occupies the entire screen, so I have to collapse it every single time, this is PAINFUL! I would like it to show in COLLAPSED as default. “Verb forms” just doesn’t add that much value for it to occupy the ENTIRE SCREEN by default. So PLEASE change this. It would improve my experience SO MUCH!!! Thank you for developing an overall GREAT APP!! And listening to customer feedback!
By TestAndTrace

I can't download any dictionary, it shows that I can't connect to iTunes Store, so I can only continue to use the standalone version.
By Hayxi

Hope u guys support the original standalone version Collins doc I purchased On my iPad thx.
By Sanc Max

Been using this app for a long time, and I definitely think it is a huge improvement over the standalone dictionary apps that existed before it. The vast number of dictionaries available in this app is great too. I do feel that there are a few things that could be improved though. I’d like to see a feature implemented into the settings of the app that will allow a user to disable the auto-lock screen feature on the iPhone/iPad while the app is open. Sometimes I have the app open while I’m doing another task, and it’s quite annoying to have continuously unlock my phone while trying to reference something in a dictionary in the app. Most other dictionary apps have this feature, so I’m puzzled as to why it doesn’t exist in this app. I’d also like to see a feature implemented into the app that would allow the user to define custom categories with different groups of dictionaries. In the current app, I have to change from 国語 to アクセント to see the entry for a word in the NHK accent dictionary after looking at the 国語 dictionaries I have. I’d like to be able to define a group of mixed category dictionaries (大辞林、新明海、and NHK for example) to be searched together. Then it wouldn’t be necessary to change between the preset categories to reference entries in across different types of dictionaries. Overall, this is the best dictionary app on the App Store, especially for Japanese learners. I hope my recommendations will be considered for future updates, especially the disable lock screen feature, as that is the worst part of using the app in its current state.
By CalculusAce