Battle your way through a visually-stunning realistic fantasy RPG with hundreds of Champions from 16 playable factions. To save the world of Teleria, you will recruit its most legendary warriors from the forces of Light and Darkness. You must train them to fight together, mold them into living weapons, and assemble the greatest raiding party ever seen. Download now to join the fight! ⋇FEATURES⋇ DEEP TACTICAL PLAY Make tough decisions and equip your champions with powerful artifacts to aid them in their quest. Rank them up to unleash devastating special skills, epic AOE attacks, healing powers and more as you lead them in RPG combat. FIGHT TOGETHER Join forces with thousands of fellow players in cooperative clan challenges as you slay demons for epic loot, rare Champions, and more. MASSIVE PVE STORY CAMPAIGN Experience epic dark fantasy done right through 12 spectacular locations spread over a sprawling, fully-voiced story campaign. FIGHT EPIC BOSS BATTLES Vanquish dozens of challenging bosses for loot, XP, and special champion drops! Cut down fearsome dragons, necromancers, golems, and other fell beasts - then go beat them again for more powerful gear. PVP ARENA Two teams go in – one team comes out. Go head-to-head with other players to unlock special gear and climb the rankings in intense arena battles. UNPARALLELED RPG CUSTOMIZATION Choose development paths from different masteries and artifacts to give your warriors millions of possible builds. Like in the best old-school RPGs, you have full control of each of your champions attributes, strengths, and weaknesses. COLLECT POWERFUL CHAMPIONS Collect hundreds of heroes from 16 factions. Assemble balanced teams of Sorcerers, Skinwalkers, Undead, Knights, Elves, and more to defeat your enemies - then recruit them to your side! VISCERAL 3D ARTWORK Raid is a mobile experience that looks and feels like a console RPG. Beautiful, fully-rendered 3D heroes offer stunning detail down to the cracks in their armor. Raid: Shadow Legends allows you to subscribe to special Raid Passes. Raid Passes will automatically renew after the specified period unless otherwise cancelled. The following Raid Passes are available: • 1 Month Silver Raid Pass with a FREE 7 Day Trial - $9.99 (First week is free, after that the Pass is automatically renewed each month for $9.99. Can be cancelled at any time within the first 6 days of the Trial Period without charge). • 1 Month Silver Raid Pass - $9.99 (The Pass is automatically renewed each month for $9.99). • 6 Month Gold Raid Pass - $49.99 (The Pass is automatically renewed every 6 months for $49.99). Raid Passes are a subscription purchase. Payment will be charged to iTunes Account at confirmation of purchase. Subscription automatically renews unless auto-renew is turned off at least 24-hours before the end of the current period. Account will be charged for renewal within 24-hours prior to the end of the current period at the price selected. Subscriptions may be managed and auto-renewal may be turned off by going to Account Settings after purchase. In case of activating a free trial, payment will be charged during the last 24 hours of the free Trial. Any unused portion of a free trial period will be forfeited when a Raid Pass purchase is confirmed. Once auto-renew is turned off subscriptions will retain the bonuses until the end of the active period. PLEASE NOTE: • Items are available for purchase in this game. Some paid items may not be refundable depending on the type of item. • RAID: Shadow Legends is available in English, Russian, German, French, Spanish, Italian, Ukrainian, Chinese Traditional, Chinese Simplified, Korean, Turkish, Japanese, and Portuguese. Official Website: https://plarium.com/ Support: raid.support@plarium.com Community: https://plarium.com/forum/en/raid-shadow-legends/ Privacy Policy: http://plarium.com/#/doc/policy/ Terms of Use: http://plarium.com/#/doc/terms/ 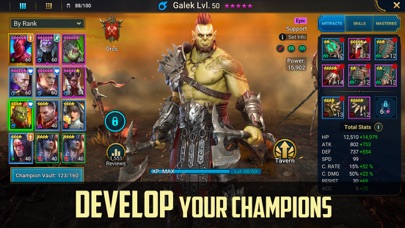 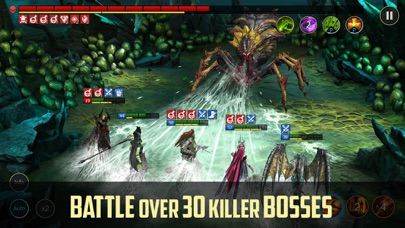 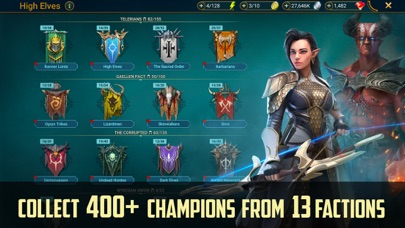 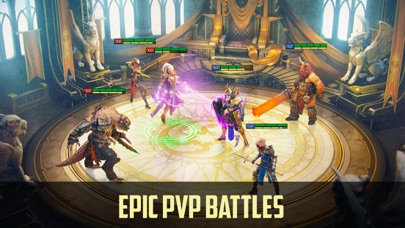 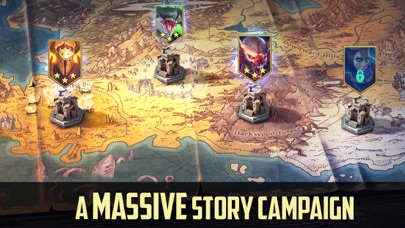 Why is there so much monetization

I understand that you need to make money but this game takes it to a different level. You don’t want spend time to get potions, here’s a pack for 10 bucks. Want champions without having to play the game, well here’s a pack for 20 dollars. This game is a lot harder on F2P players.
By Not sponsered by Raid

Raid: Shadow Legends has tremendous potential, but its not f2p friendly. Have played it for about a year. Best graphics in mobile gaming bar none. Features and rich content are limited compared to other hero collecting games. Plarium actually charges large in-game sums for basic game play like extra storage for collecting heroes. Solid community of players keep it afloat in spite of the developer greed. I’ve played other f2p games. Many other developers like Supercell maintain more balance between f2p and p2w. To the developer response: The amount of silver and or gems (in-game currency) required to add adequate storage to collect heroes, participate in fusion events, etc. is very high. I know many in the community, and myself would gladly spend on the game, but not for basic components like storage just to play the game.
By Makeeasier2use

Once I saw the sponsors on YouTube I got invested in the game, once I played I had loads of fun with the experience, overall fun game cool graphics but you have to buy some stuff.
By Crusaderboi9000

Too many pop up ads to make an in game purchase

Every time I log in I get bombarded with in game purchase ads. Finish and match, more pop ups
By Spclo83

I know you get this a lot but I do feel like it’s trying to drain the money out of you. It would be nice to have a setting to not to have so many pop ups. I’ve the ads for this thousands of times and some of them are ... well questionable. Also it’s weird how kid YouTube channels are promoting the game with questionable kid friendly characters and ads. the idea is perfect but a couple changes would make the game a lot better.
By Troopereyes

This is a great game but unfortunately I got screwed by the signing in to Facebook, before signing I had quite a bit of progress in it, so much that it would be heart breaking to lose, as I signed in suddenly it was loading, I was nervous at first and my I was suddenly playing the intro again I cry I agony as I lost EVERYTHING all my heroes my level my exp...a lesson of importance is sign in to Facebook before making any progress, I hope this is helpful and sadly I’m not going to wait what I’m pretty sure was almost a whole year just to get back to my level.
By awesome game 42

The cost is too much.

I tend to spend a little bit of money on these types of games. The fact with this game is that they are asking for so much money for things that shouldn’t cost nearly as much. Like trying to sell 15 RARE shards for $100. 15 rare shards should cost at most $10 because the odds of getting something good is so minimal. Another is 1 legendary shard and 1,000 gems is also $100 dollars. Tell me how that works. I’ve gotten at least 15 legendary shards while playing and have only gotten Epic champions, so the cost for actually buying legendary shards is WAY overpriced. They also need to add easier ways to get the good shards because now I’m stuck and can’t seem to exceed in the game because I have no way of getting new champions. I really like the game and I’d like to keep playing but I’m just getting bored now. Overall good game but they just need to fix these things and honestly they could make more money too, because if half the stuff was half the price, I would’ve bought it instead of not at all.
By Tolvy

Beware: Over promised and under delivered

I have been playing for just under two months and the honeymoon is over. Currently with Lifetime spend of 4 figures. *Rife with crashes that result in the loss of valuable resources. At first compensation was decent. That has trailed off. *I paid for content such as Raid Pass and Battle Pass and both have not work properly. The Raid pass was broken for WEEKS. It is a MONTHLY subscription and it took weeks to fix with no mention of compensation. Waiting for the second week for a fix while watching them pump out new items they want people to spend money for. *Customer Service is appalling. Deal breaker. I said I was charged twice for something and when they treated me as though I was lying and asked for proof I provided bank statements and the line of communication then went silent. My original post somehow erased. May update in future. 4/10: weeks later still no response. dropping another star. the customer is not valued with Plarium Update 3/27: *Constant Server crashing - Literally crashes and is inoperable every other day. Check official forum and discord to see how many times they have to apologize for the server crashing. Constantly. *They commercials are misleading about game mechanics and visuals. Really leads me to believe this company is not trustworthy. So if you landed here from advertising, again join te discord and ask around for the opinion of many of the more experienced players. It would appear the strategy is to bet that you will start playing, but a few starter packs and then drop off to only be replaced as the cycle continues. *As you level up, I’m near max 60, I have about 124 energy a day, I can run a dungeon for 12-14 energy units each and only receive 1 XP brew, or like 5 lessor potions. You quickly realize the game thrusts you towards spending. This wouldn’t be a problem if Plarium did not market the F2P aspect so aggressively. Again, very misleading “bait/switch” tactics *There have been multiple times offered packs have been misquoted as double chances and people bought them only for the team to apologize with no public offer of refund or how the mistake happened. And this has happened MULTIPLE times. *Plarium is is a subsidiary of a Casino company, Aristocrat - take from that what you will.
By @KINGWARNERART

Let’s start with what I like. This game has great potential and there is a ton of cool mechanics. The graphics are pretty good as well. However, this game really has a lot going against it such as its massive battery drain, the countless ways the game makes you desperate for silver. I mean seriously, you spend silver on equipping equipment? The base core of an RPG costs silver, there are also tons of tedious ways the game forces you to wait if you’re f2p. Examples include energy, slow rewards, and a couple of other things. My last thing I have to say is that you can literally play without playing. There is an auto play feature that will let you push one button and if you’re on par with the levels, never lose. But I don’t hate this game. It’s got again, great graphics and potential, I just think it needs some mechanic reworks.
By Electrogamer995