SkySafari 6 Pro will revolutionize your astronomical viewing experience. It has the largest database of any astronomy app, includes every solar system object ever discovered, offers unparalleled accuracy, flawless telescope control, and provides the very best experience under the stars when you depend on it. Discover why SkySafari 6 Pro is the #1 recommended astronomy software for serious amateur astronomers since 2009. Here's what's new in version 6: 1) Complete support for MacOS. We got you covered and release regular updates. 2) Clouds and Astronomy. Two words that rarely go together. Rewritten from the ground up, SkySafari 6 Pro will (optionally) back up all of your observing data in our secure cloud storage and make it easily accessible to multiple devices as well as from our new web interface, LiveSky.com. 3) We Have The Best Stars. Precise, modern and deep. We’ve updated our star catalog to use the latest and greatest, UCAC5 star catalog. If 25 million stars down to 15th magnitude isn’t enough for you, an easy in-app purchase gets you down to 16.5 magnitude and a whopping 100 million stars! 4) We Have The Best Galaxies. The PGC catalog includes galaxies down to 18th magnitude. Want more galaxies? How about 2.6 million more? An in-app purchase gives you access to the largest galaxy database available for your device. 5) Observers First. A redesign of our tools puts the active observer first. Quick access to features like your equipment, observing sites, lists, and observations make it easy and enjoyable to get out, observe, and record your observations. The observing sessions feature lets you collect your observations into groups that span a few hours, or a few nights. 6) Graph It. The completely new graph tool will give a quick visual representation of an object’s altitude above the horizon. Essential for planning your night’s observations. 7) Plan It. Make the most of your time under the stars. Our updated planner is a powerful tool that lets you create a list of targets for your observing session with filters like object types, specific time ranges, constellation, catalog, and more. Plan it and get more done. 8) Share It. SkySafari 6 is more than just an app, it’s a new system to help organize and share your observing experiences. With a free signup, you can see and share your observing data from our web portal, LiveSky.com! Affordable premium memberships add online editing, so you can not only view, but edit your observations, add new observing sites, manage your equipment and more. Finally, you can view, edit and manage your settings files with SkySafari Web, our fully functional web version. If you haven't used SkySafari 6 Pro before, here's what you can do with it: • SkySafari 6 Pro will find stars, constellations, planets, and more! The star chart has been designed for the ultimate stargazing experience. • Simulate the night sky up to 10,000 years in the past or future! Animate meteor showers, conjunctions, eclipses, and other celestial events. • Control your telescope, log and plan your observations. • Night Vision. • Orbit Mode. Leave the Earth’s surface behind, and fly through our solar system. • Galaxy View shows the position of deep sky objects in our Milky Way! • Much more! 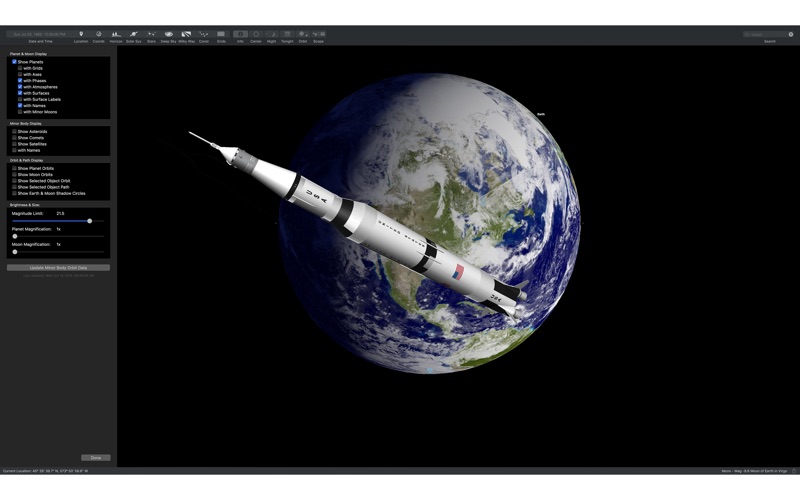 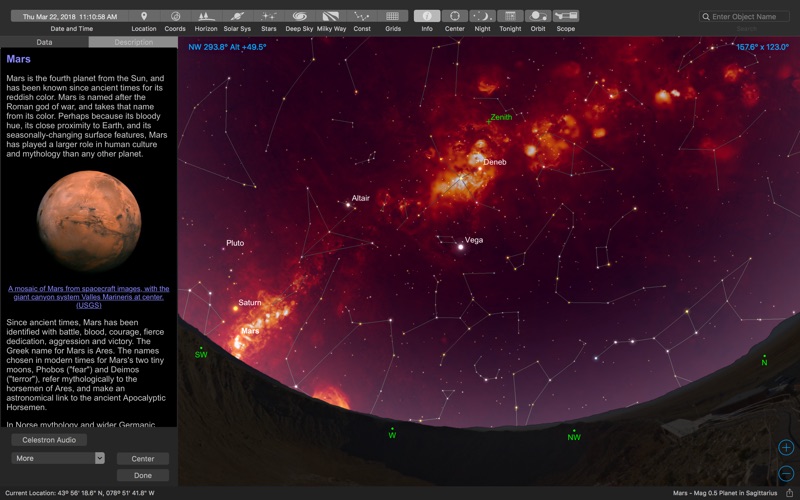 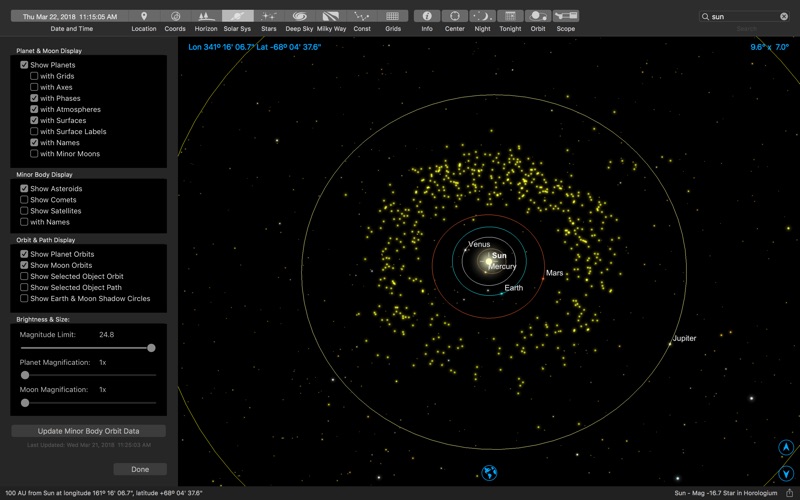 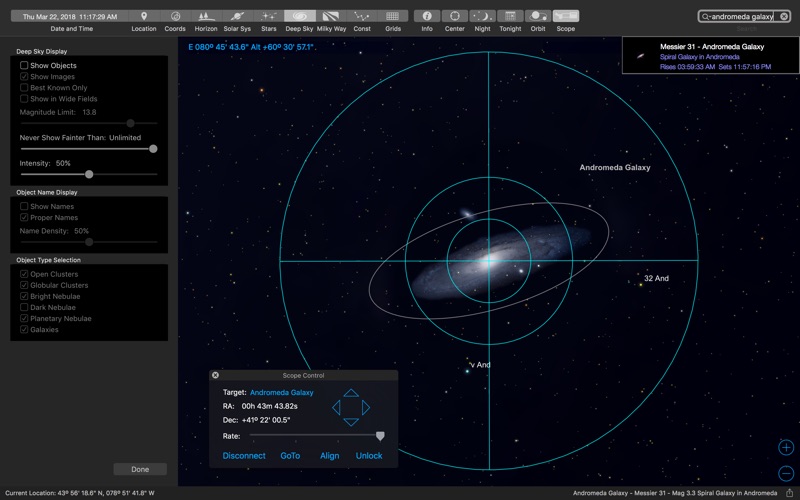 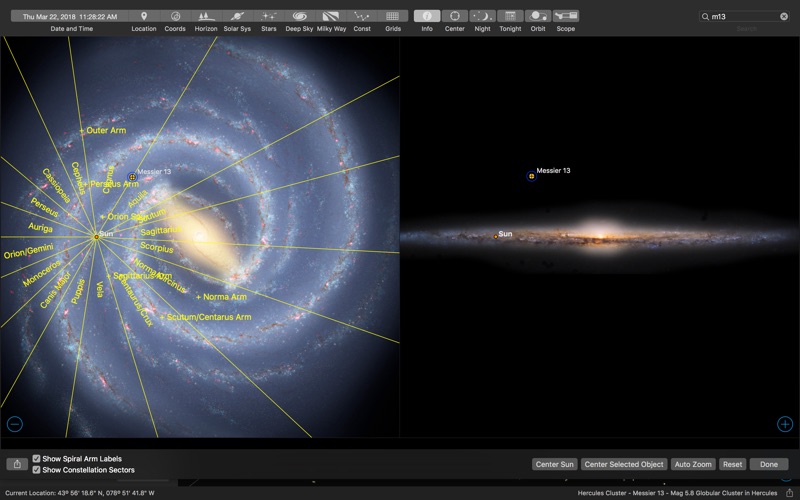 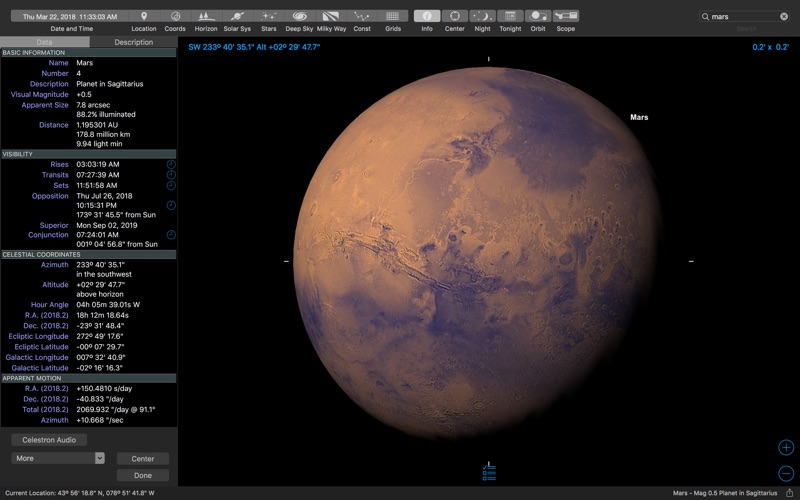 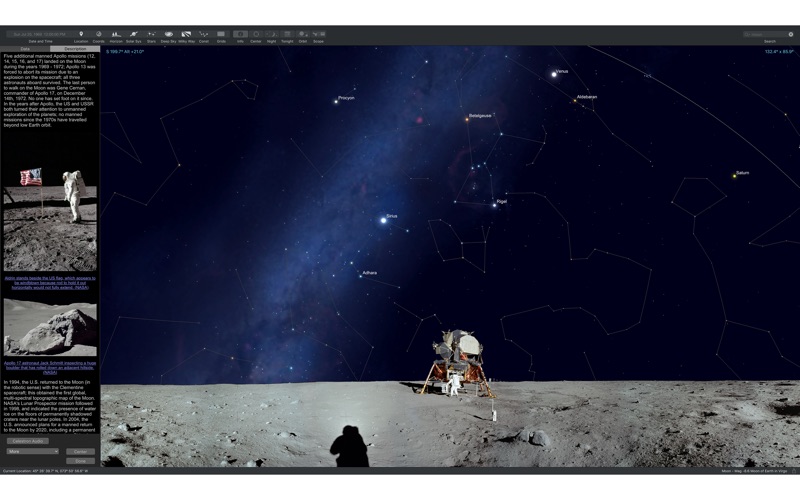 I use this program to run three telescope mounts: two NJPs (a PC and a Temma 2) and also a servocat. I have Used it at several TSPs and also use it in my own observatory. I feel I have extensive experience using the program and it has worked well for me. It has been instrumental in hours of very enjoyable observing. I would recommend it to any serious observer.
By JG in Texas

I have used the iPad version and am now enjoying the desktop version. I am currently working on the Herschel 400 list and the iPad SkySafari 6 Pro makes it much easier to manage my observations. It is much easier to use than a paper atlas because I can superimpose circles that correspond to a chosen eyepiece and follow the altazimuth grid lines when I star hop with my Dob. When I discovered that I can dictate my observations directly into the iPad I was thrilled because I didn't have to write in the dark. SkySafari will automatically include the date and time for me. Of course I transfer the observations to my paper logbook as a permanent archive.
By Koonlo

I'm unable to purshase the needed add ons for this app. I've tried to contact support but their website locks me out. I'm so done, I wish I'd never bought this app.
By kcwookie

This is a nice astronomy application and generally works well. But there is no technical support. You can't submit a support request - you have to post on a forum - but it won't let you logon to the forum. I tired Safari on a Mac and Chrome on Win10 and both are blockedl. The latest update also doesn't restore prior purchases - so options I paid for are now unavailable. The iOS and iPad OS versions work much better. Don't waste your money on the Mac version.
By HamsterDR

I've used SkySafari in its various versions for at least four years now, and have come to appreciate its utility, user friendliness, vast amount of included data, graphical interface, and most recently, its ability to reliably control my telescope. As I move more and more to imaging, the ability to control the mount from an iPhone or iPad is invaluable. Most recently, the availability of scope control devices like Stellarmate and ASIAir, which couples with SkySafari, has enabled 'hands off' imaging in addition to its routne use for observing. An indispensable piece of software which I find myself using even more than traditional tools like TheSkyX. Simple wins for casual users like me.
By Quantum xzy

A Great App for Amateur Astonomy, but… It Lacks a useable way to do Planning & Observation Write-ups

Sky Safari 6.0 Pro has a ton of great features going for it and I use it constantly, but…. I couldn’t give it 5 Stars because it fails to provide a convenient way to 1) create and use observing lists, 2) Set up an evening or weekend’s observing plan, called Sessions in SS6, and then follow through with a customizable writeup, summarizing the observation, which can then be readily shared or printed. The app certainly provides a low level of functionality for each of these 3 functions but does so in an awkward, inconvenient and frustrating way. I’ve had to spend days reworking my lists, sessions and observations records once I found out that an object cannot be in more than one Observing List. For example, if you happen to import the full Messier Object listing to make a master Messier list from, you have to delete from that ‘master’ list any of the Messier objects that you decide to include in any other list - say, a "Friday Night Observing Session” list. If you create Friday night’s list and include M53 on it, then make and record the observation, the observation will not be created, or will be lost in space, unless you’ve first deleted M53 from the master Messier Observing list. Imagine how frustrating that can be once you created 20-30 observation records which have disappeared. To be fair, they say that in the ‘help’ section on lists, but, do you read all the help text before you start using an application? It needs to be more intuitive and it’s just not there yet. Another disappointment is the inability to include any custom text on an observing list - like what the idea for the list is based or what’s interesting about the objects on the list. Maybe the list came from an article in Sky & Telescope and you want to reference that article or keep track of what’s interesting to look for with each object and why its on the list to begin with. If you’re a bit like me, you might also want to have a nicely formatted and printable record of your observations - its just not happening in SS6 yet. It stays in neat compact, inflexible and non-printable format within SS6 forever… Sky Safari offers many features and a lot of functionality in one app and in a straight-forward if somewhat inconvenient way. It avoids the complexity of applications like Skytools, Astroplanner and Deep Sky Planner but it does so at the expense not being able to customize much of anything regarding planning and observing lists or write-ups of completed observations. I bet they’ll work on improving that functionality in coming updates…I’m looking forward to it.
By Aalto33

I don't even own a telescope...

...and I get to travel around the universe. This needs to be in every school in the United States in my opinion. Amazing program. Thank you developer(s)!
By ApocalypseAmps

SkySafari Ie Excellent Except for One Missing Feature

I've been using SkySafari Pro starting with version 4, then 5 and and 6. It's my workhorse program for planning, operating telescopes and finding object in my observstory. I do wish it had a deeper star catalog for identifying dim stars in astrophotograph. I only gave it a 4 star rating because I feel it is missing a critical feature that I use in a major competing product. That feature is the ability to rotate the display to any arbitrary angle to align it with photos. I like to blink compare its display with a photo on the screen to identify objects in the photo and its difficult when the orientation doesn't agree.
By Rick M Scott

I have used SkySafari since SS4 and it is central to my Macintosh/Apple-based astrophotography system. I use it on both my MacBook Pro and iPad Pro. On the iPad it integrates seamlessly with ZW Optical’s ASIair and my iOptron CEM25EC mount. However, I recently acquired an iOptron CEM40 and found that I was unable to communicate with the mount using the latest OS X version of SS6 Pro. There was no option to specifically select the CEM40 mount as there is on the latest iOS version. I have found though a Simulation Curriculum SS6 forum that this is a glitch in the SS6 software that as yet has not been fixed. I am expecting that at some point this will be fixed and this review will be irrelevant but until that time the OS X version of SS6 does not seen to work with the CEM40 mount. I would ordinarily give this software a 5 star rating but until then I am rating it two stars until the developers take notice and fix the problem.
By virtualimage1

As a visual observer that star hops, the cons of this program are its inability to make charts with more than one FOV marker. You’d think it would be a no brainer. Yes it may seem minor, but it means its never the first program I go to to plan a night out. The program is solid. Little to no crashes. It seems to concentrate on computerized scopes. Nothing wrong with that, except of course the one mount I have, the SW Alti does not work. There is little doubt this is the best OS-X Astronomy Program out there. Starry Night is darn good as well. Thing is, neigher seem to do what you would do with a paper chart. Place mulitple FOVs on the chart. Draw on the chart, etc. Adding scopes and FOV are clunky and repetitive. You wind up a dozens of entries instead of just saying place a circle for this scope and EP. Worth it? Yeah it is. However it’s roots as a planetarium program still dominate its functionality.
By gdjsky01