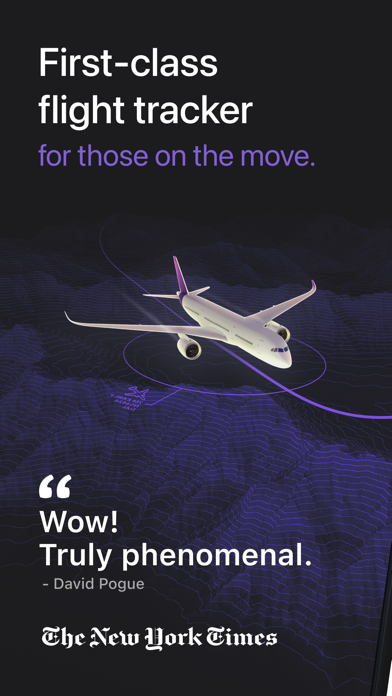 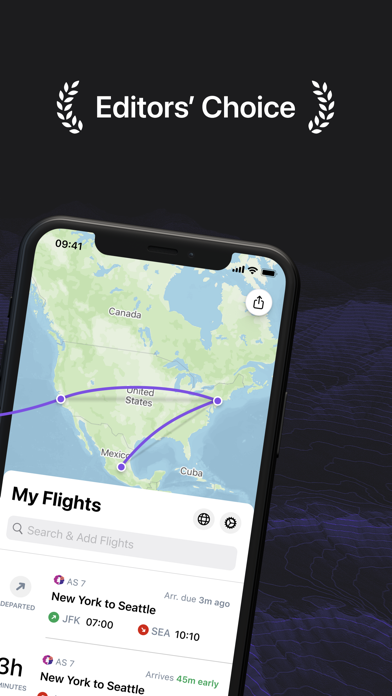 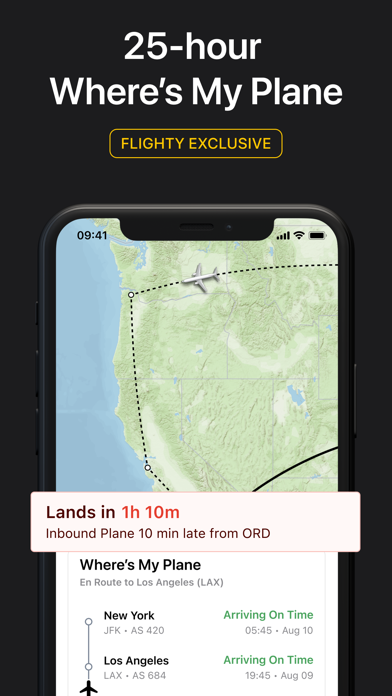 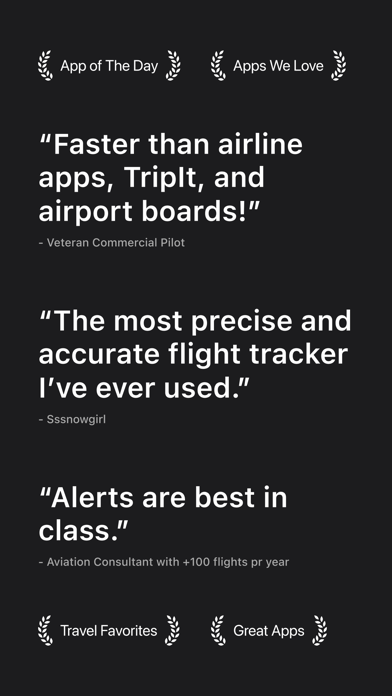 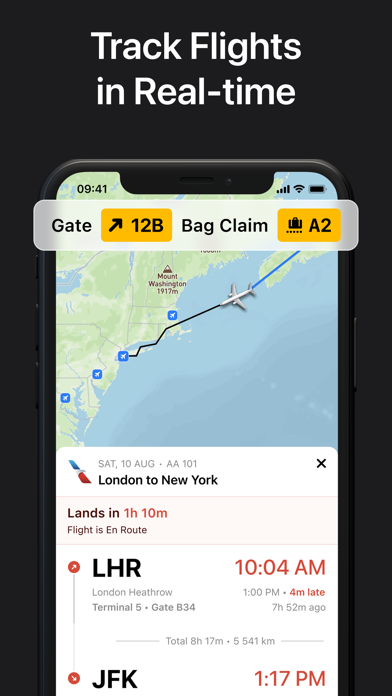 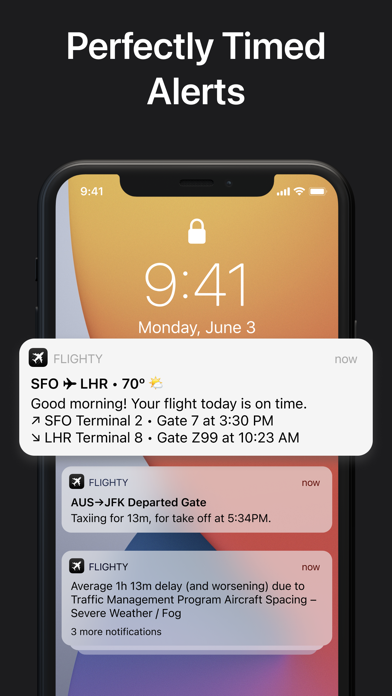 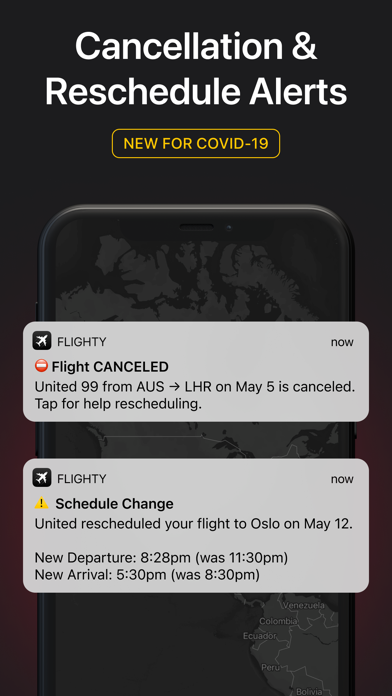 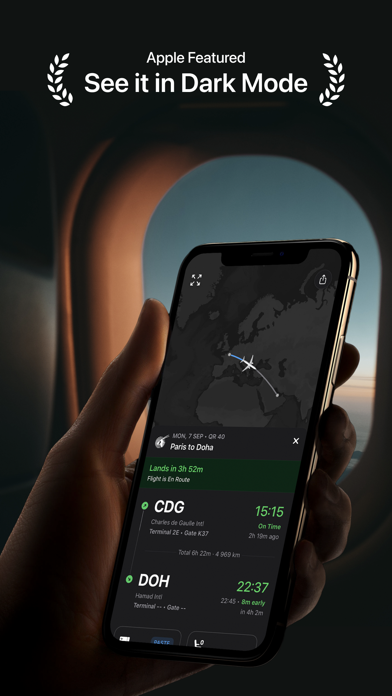 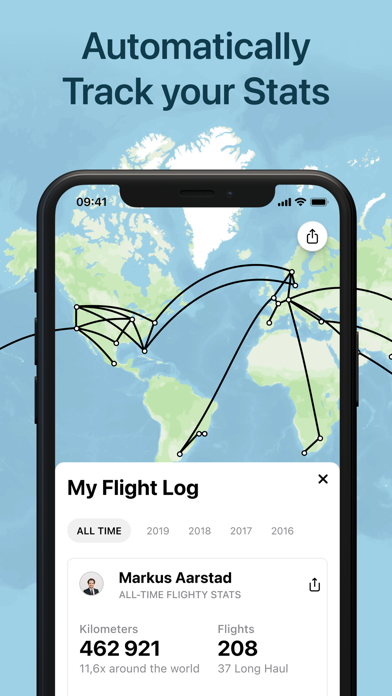 I would like to purchase the Lifetime subscription, but it stalls and then crashes!
By Whoduhthought

One of the first thing the app asks for is for you to turn on notifications for your flights. When you’re greeted with that screen, for something as simple as a notification, it wants you to pay $49.99 a year for pro. Beware... developer charging for basic features like notifications. Buyer beware!
By Statusnone88

I like the app. But a serious BUG in it.

Whenever there is flight is delays the app loses track of the flight. Then when the flight actually takes off it will say that the plane is still at the gate which it is not. This app only performs well when there is no flight delays or interruptions. Also they should put in the ability to lookup the tail number on the aircraft and not just the flight number and route.
By prince188

Not helpful when things go wrong

I had high hopes for this app but I feel disappointed. The app promises stress-free travel. However, one time, my first flight was delayed and I missed my second connecting flight. The app duly acknowledged the delay of the first flight and offered zero assistance or suggestions to rebook. I don't need an app to tell me "too bad, looks like you're going to miss your connecting flight" when I know that already. Offer a solution instead so I can call the airline and get it fixed in the best way possible. Even worse, the app still assumed I somehow made that flight - which would have been impossible - and sent a useless notification to inform me that that flight landed on time without me on board. Another time I had again a delay and it was cutting close but I still made the connection, not thanks to the app however again offering zero assistance on the best terminal route to make the connection, just showing the time and departure gate that the cabin crew already announced when we were taxiing to the arrival gate. And now I have a flight that is canceled but that is still kept on the timetable (with no bookable inventory) because the airline can apparenty not delete the flight from the schedule until every pax has been rebooked. The airline notified me 2 days ago of the cancelation, this app today still thinks the flight is going ahead as scheduled. Come on. For me the promises of "pilot-grade data", "instant updates" and "unmatched notifications" have not been met. I understand that the app is limited by the information that it receives, but it could absolutely have been proactive and helpful in each and every situation above. For me, "pilot-grade data" means to be better informed than the average pax. Instead, I pay a subscription to simply have the information repeated to me that the airline already gave free of charge. 2 stars.
By Rymy_az

I've used many a premium flight app and while this app provides additional ancillary information such as tail number, it comes with a very high price tag. The advantage of this flight app over others is the detailed in progress notifications such as bag claim location when assigned. If you're a super frequent flyer, one might justify the steep monthly or annual subscription price but otherwise too expensive and should cost far less than Flightradar.
By markbyrn

Excellent app! I love how im able to keep track of my travel history.. Although i think theres an update needed, recently I haven’t been able to sync travel from emails and some flights that I manually plug in come up inaccurate. Hopefully it can be fixed soon
By Creple123

This app may have many nice features but none of them are useable if it can’t locate and update flight changes. For the past two weeks Flighty has failed to update scheduled flights and when I tried to delete and re-enter, it cannot correctly locate new flights. Great to know the tail number, too bad it won’t let me know if my flight time changes
By Steve in Miami

I do enjoy the clean interface. But I find it’s features and flight information to be lacking given the price point. For example a competitors app, flightradar24 offers more details. Particularly Adb receiver information on flights ( ie from current aircraft speed to its current altitude ) . Flighty costs more and gives you less details. If flighty could provide the same amount of adb/ other information then it would be compelling. Otherwise it’s not worth the price point as is.
By xohm