Whether you are an avid golfer or a casual mini golf player, we invite you to an adventure with this top multiplayer golf game - Golf Rival - and enjoy real-time competition and fantastical golf environments! We have over 30 epic golf themes and over 300 spectacularly designed courses, each giving you a different kind of golf battle experience and filled with ultimate golf excitement. DOWNLOAD this free-to-play golf game now and golf with friends from all over the world! PERFECT GAME FOR CASUAL AND SERIOUS COMPETITION - Top multiplayer games with hundreds and thousands of active online golf players around the world! - Intuitive gameplay: easy to understand tutorials and simplified mechanism. - Simple to play: drag finger and release to drive your balls! - Develop precision and feel for the game as you progress to achieve difficult and dramatic shots. BECOME A TOP GOLF CHAMPION - Compete in 19 Stages and hundreds of epic courses to unlock golf clubs of various rarities. - Horn necessary skills such as hitting long bouncing shots, winding curve shots, “dunking” balls, as well as other trick shots leveraging landscapes and obstacles. - Collect and use over 300 Special Balls to out-maneuver your opponents. - Win golf games to receive chests rewards to upgrade your golf clubs and earn free special balls! - Find and challenge the best golf players in the League and Global ranking list! WEEKLY AND MONTHLY LIVE-EVENTS - Match against opponents quickly and play against the best golfers around the world in fun competition formats! - Special Challenges: offers weekly creative rules and exciting PVP competition. - Kingdom: Climb the ranks of Knight, Viscount, Earl, Marquis, Duke, King for great prizes and honor badges. - Tournaments: standalone play to achieve new personal best and show off records to friends. - Arena: complete Albatrosses in Par-5 courses for course mastery. - Brink Game: Hit the ball close to the hole without sinking it! COMPETITION BREEDS FRIENDSHIP - Make new friends through playing golf - Invite your Facebook friends to join this addictive golf game! - Accept gifts from your friends by playing with or against them! - Upload and share your personal profile with other Golf Rival players globally! DOWNLOAD and BEGIN your golf adventure by playing Golf Rival with players worldwide! Join this exciting and addictive game, win your clash and become the master of golf games! If you have any questions or feedback, please let us know. You can contact us via Facebook: https://www.facebook.com/GolfRivalGame/ or tap the "Help and Support" button in game settings to get help. Privacy Policy: https://www.zynga.com/privacy/policy Terms of Service: https://www.zynga.com/legal/terms-of-service 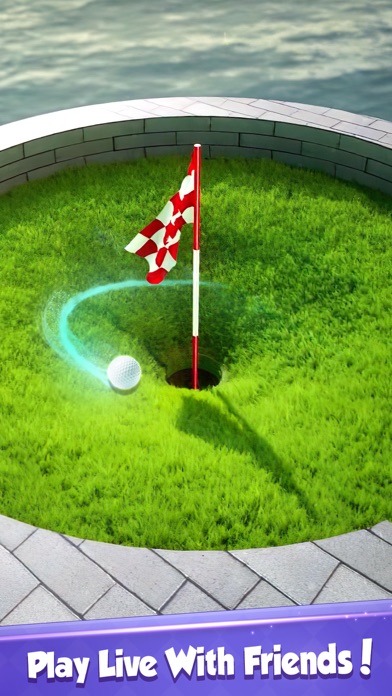 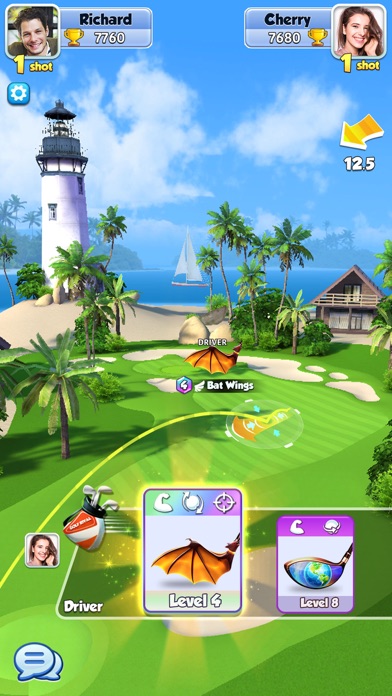 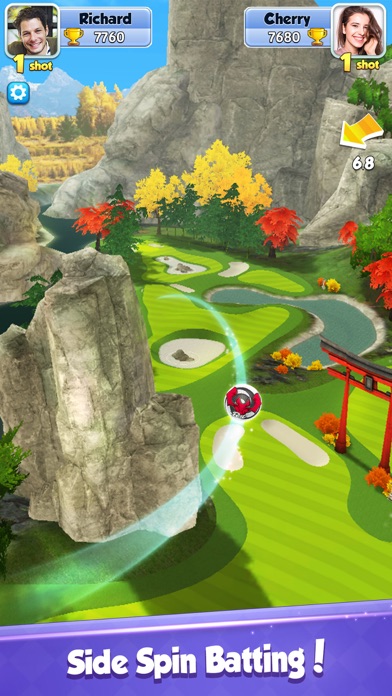 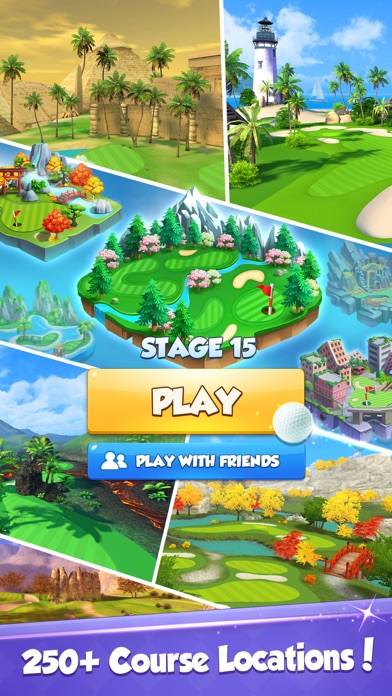 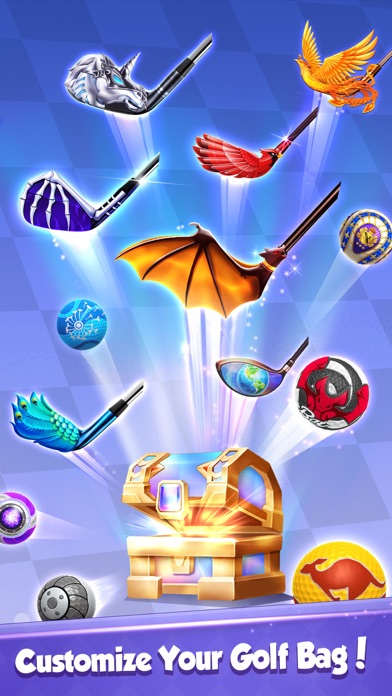 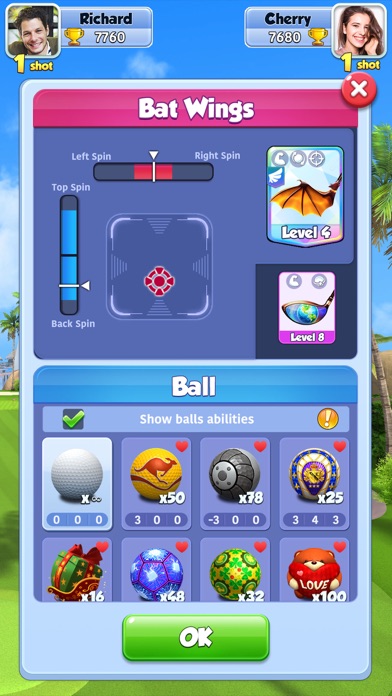 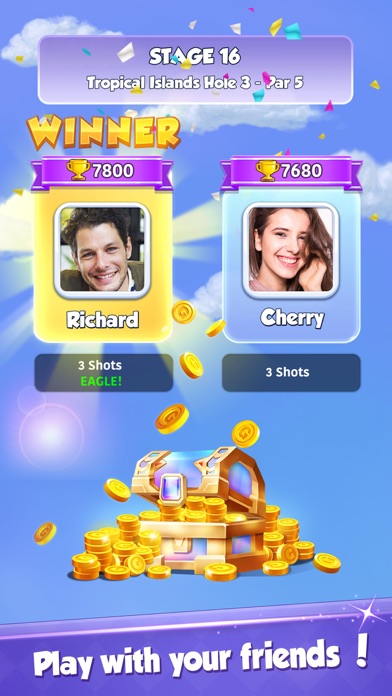 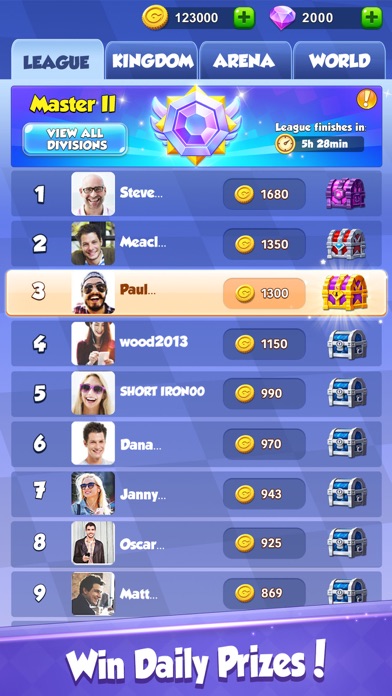 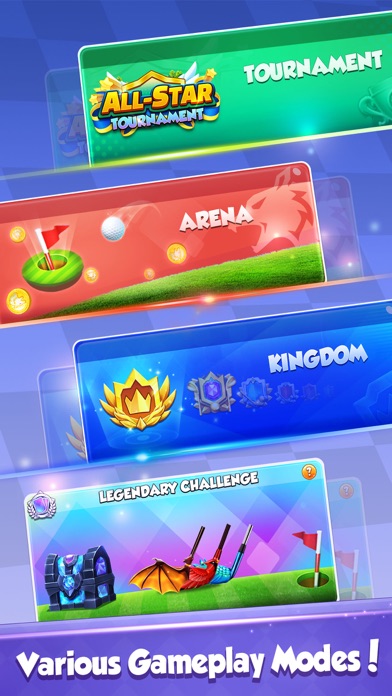 Good lord is this ever going to stop. I finally get a level 7 batwing. Every other legendary club of mine is at level 6. The moment I get to duke V the cheating really kicks in. I am matched against level 9 of every single legendary club. Plus they are all emperor status. It’s become a joke. It’s been a joke with all their cheating but this is just insane. Now the draw matches are usually with woods. Of course because I finally got a level 7 batwing. Anything this scam of a game can do to screw you over they will most certainly do. Before I couldn’t even make it to the green with my level 6 batwings and now they give draw matches to where you need a level 7 wood to get to the green. It’s just amazing they can give draw matches where you have a 0% chance of winning. Or even making it to the green.
By lcksdhf

I’ve been playing this game for over two years and it’s the biggest scam pay to win game I have ever played. The rules of the game don’t make sense that’s the first problem and the second problem is the physics of the game are hot garbage. This is not a true golf game. This is a golf game. That’s rigged, and in the favor of making the player pay it’s a win win for the crooked developers. Typical developer scum
By Roadjockey

Used To Be Fun

When I first purchased this game, it was fun to play and try to acquire new (better) clubs and balls. Now, you spend 5 minutes when you first open the app to go through all of the gimmicks of spinning wheels, dice games, special offers, and rewards you need to purchase if you want them. It takes away from actually playing the game. Seems like the developers are trying too hard to monetize everything and it is taking away from a positive game experience. Plus, some earned levels are automatically downgrades if you don’t play the game enough. I’m no longer purchasing anything in-app and once I use up my paid content, I’m moving on.
By phoebeans

All about the Benjamin’s

I would enjoy the game tremendously if you didn’t have to spend so much money to compete with players two and three levels above you. You should be handicapped with players, your own level.
By HHHMIKE57

All about the money. Don’t pay you get dinked. Wind charts always off . Don’t waist your time.
By hhfghurfj

This game is a fraud!! I sent screenshots proving that there extra games “free spin” is not random. I sent the complaint to Apple and GP as both stated what I’m stating violates there policies for developers. Me and 2 friends tallied up the free spin game, the only time it landed on shards is when it was the only piece left. To keep spinning you are supposed to keep use coins which are purchased. The developers claim it’s random, but out of 117 spins on a 8 section wheel, it was only 1 time. They match players up with small clubs against big clubs forcing you to spend money to play and be able to get anywhere in the game. I understand they have to make money but at least make the game fair.
By Apple Reviee ID1982

Fun game but seems either rigged or glitched out.

I play this game 24/7 and it’s incredible. But a lot of the times I find my opponents making impossible shots and winning just like that. I used to play golf and know for a fact some of those shots are just not possible. Another time I got a hole in one. Then the game continued as if I never had made the shot. I ended up with a birdie in the end because of the glitch. I wouldn’t really care though it takes away points from me now. It’s a wonderful game but it needs bug fixes or some of the people are computers and it’s rigged. I recommend this game if you love golf, but don’t be surprised if you find your opponent beating you with impossible shots.
By Basket Holder

This game will lose connection for no reason from time to time and will cost you matches. If you contact them they will not respond or compensate for for the loss.
By Uncool mike

Save your money Ok in beginning but unfair as you progress

The game is ok in the beginning but as you progress you play against golfers with way higher skills and makes it near impossible to compete. Waste of time, save your money.
By Tstarz2