FANTASTIC COMIC WORLD IN YOUR POCKET! WebComics is one of the most popular comic/webtoon platforms for American youths! Join us now to read amazing comics everyday and chat with 8,000k+ webcomics/webtoon enthusiasts! FEATURES 1. Top-notch comics of distinctive genres updated daily from creators across the world. 2. Special offer for new users - all free comic books for you. Collect Free Card to read all comics! 3. A community for fans to share what you love and interact with your favorite creators. 4. Unlock special offers for Premiere to read exclusive books. Come explore more Premiere privileges! 5. Multiple languages are supported, including English, Indonesian, Thai, and Chinese. RECOMMENDATIONS FOR YOU! ＃Fantasy＃ —— Bride of the Dawn A secret contract between a human girl, vampires, and werewolves. Hatred, conspiracy, death, love, the fate of the two races… What choice will she make？ ＃Romance＃——The Naive Mr. Lu She disguised herself as a man for her twin brother, but ended up falling in love with whom she investigated. Family, power, status and revenge... Her real sex and the background were revealed, how would she do when pounded on all sides? ＃Boy’s Love＃——Equipoise As a boy who keeps a certain distance from everyone, he actually meets the one that he wants to make every effort to help. ＃Action＃—— School Beauty's Private Bodyguard Based on a novel with over 100 million clicks. After being enrolled into a school, let's see how he fights bad guys with Chinese Kung Fu and protects beauties! FOLLOW US Facebook  @WebComicsOfficial Instagram @webcomics_official Youtube @webcomics_official Twitter  @Webcomics_app Official Website: http://www.webcomicsapp.com SUBMISSION If you are a comic creator or you want to publish a comic or webtoon, send us your work！ Email: comiceditor@webcomicsapp.com If you need technical support or have anything to say to us, drop us a message！ Customer Services: Webcomics@sidewalkgroup.com Subscription pricing & Terms 1) $5.99/month for Premium 2) $17.99/quarter for Premium 3) $69.99/year for Premium 4) $6.99/month for PLUS 5) $57.99/year for PLUS - Payment will be charged to iTunes Account at confirmation of purchase. - Subscription automatically renews unless auto-renew is turned off at least 24 hours before the end of the current period. - Account will be charged for renewal within 24 hours prior to the end of the current period, and identify the cost of the renewal. - Subscriptions may be managed by the user and auto-renewal may be turned off by going to the user's Account Settings after purchase. - No cancellation of the current subscription is allowed during an active subscription period. Terms of Service: http://h5.webcomicsapp.com/public/app/disclaimer/server.html Privacy Policy: http://h5.webcomicsapp.com/public/app/disclaimer/privacy_ios.html 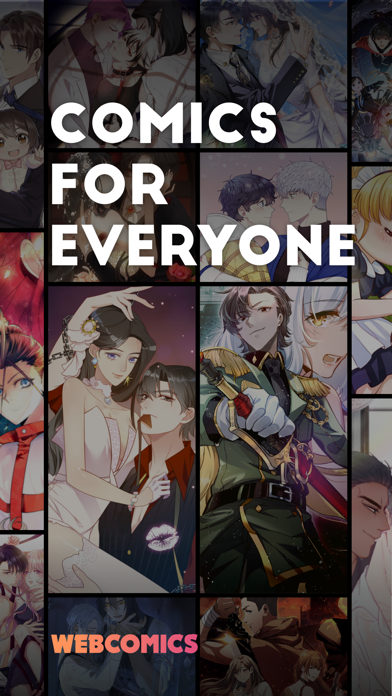 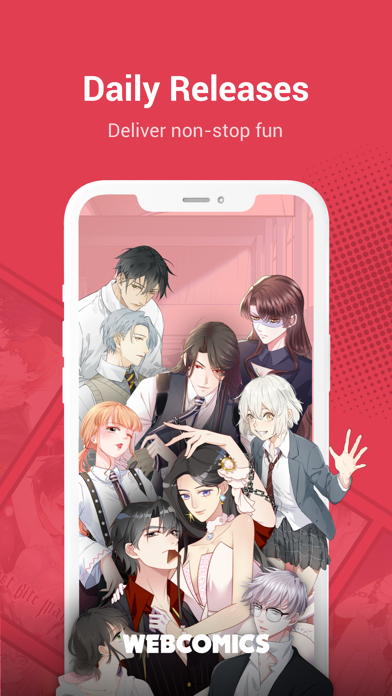 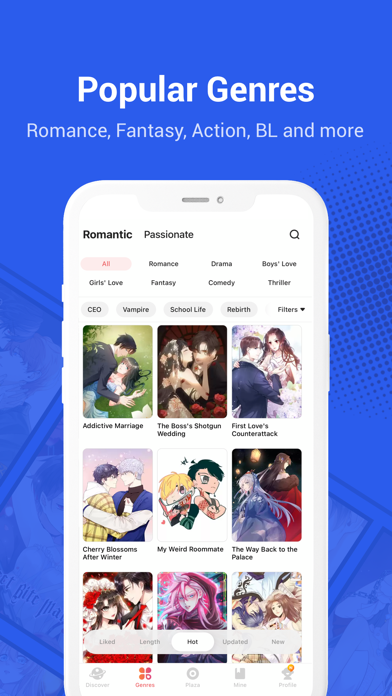 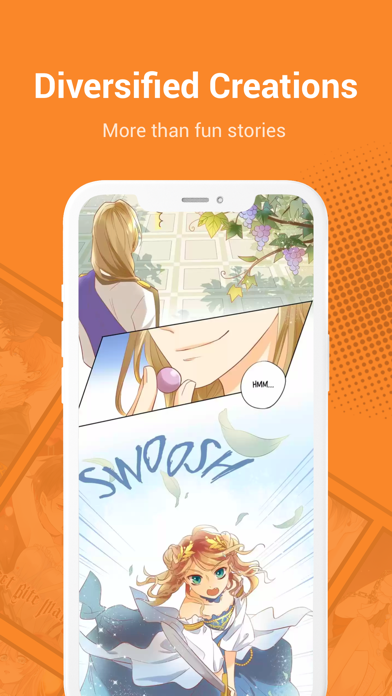 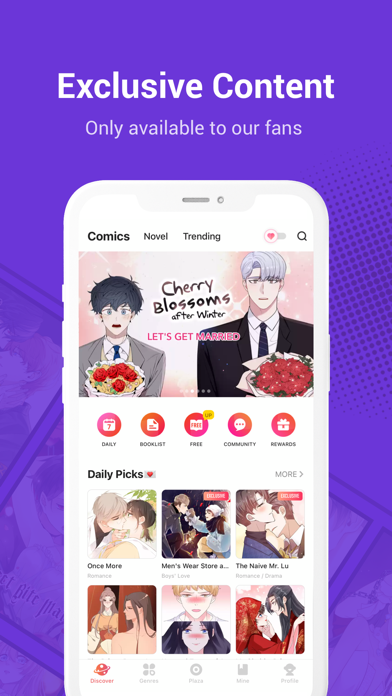 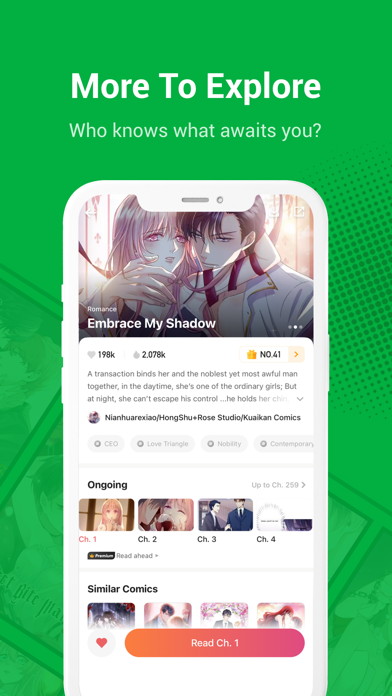 Honestly, I am kinda disappointed with the system here, when I first got this app I was able to read all the amazing comics here, for free! But now, it’s all “get coins!” “Buy Gems!” and I don’t have the money to do that… it was much easier In the past where you can read a comic for free and unlock a chapter by watching an ad, but now it’s much more difficult. I can’t even finish a comic without having to wait days to get daily coins, and like 1 Gem per essay. It’s kinda unfair, I know you run this whole entire thing but make it easier to read comics! Maybe do sponsors or Ads to read more! Please fix this and make it how it use to be, thank you for your time.
By 🩸🐍💀 Severi 🐍🩸💀

I give this app 4 stars. The stories are good however we have to wait at least a week to read one chapter or pay 20 bucks to read an entire story.
By Sweet but a psychopath

The app is great but can you add a thing to affect how it loads. So to make it like load ahead before you start scrolling down because it gets Annoying because my wifi can’t load the images Instantly
By ᑎOT.ᗷOᗷ

Ive had this app for over a year. Probably about 2 idk I've been here for along time. I normally don't write reviews but I am giving up, I've been hooked on one story since i started this comic app and now I can not finish it. It used to be free then it got changed to gems. I understand artists need to get paid but having years invested in a comic to not being able to finish it because you cant afford gems stinks. I used to be able to read it for spinning the daily wheel and getting free day or 3 days of reading but I've not been able to even get a day to read in months and I spin it daily. Idk if they have changed the free day rates lower but I've not seen one in forever. I have decided to uninstall it because i just am not going to waste room on my phone for something i haven't been able to use in months because reading new stories for their free chapters isnt worth it because they all end the same gems.
By Sem1987

There are still many bugs

my iPad is too old

11/22/21 I can no longer update this app so maybe that's why the St. Like's ads keep locking the screen forcing me to exit the app, go into a different app and then come back to Webcomics to get it unstuck.
By lai-di

ive been having webcomics since 2017 and ever since then, i just loved reading comics from there. but there’s something about the new update they did thats unnecessary; at first you had to use coins to pay to read. and it was much more easier to get coins without paying with real money. but now, you have to get coins and transfer it to gems. and for 1 gem it costs like 10,000 coins. and it’s not easy to get coins. And also you could pay money to buy gems, but i feel like it’s to much money. i personally think this update in unnecessary/trash. webcomics, you definitely lost a reader.
By unknow846

I subscribed to get premium but I regretted it because after I did subscribe comics were still pay cons or gems to read I thought subscribing would make all the comics free but I was wrong DONT buy premium it’s worthless n waste of money to be honest.
By milaasaa

I’ve been using WebComics for about 2-3 years. When I first got the app, it was absolutely amazing. Back then I would have rated it 5 stars. I understand that the authors who make the comics started to charge gems for their comics and that was totally fine. Comics would usually cost a couple coins or a couple of gems. They were pretty easy to get with the daily spin. The best part was that the daily spin seemed to have equal odds of landing on 10 coins or a 3 day free read. However, now you unlock chapters with red or green tickets and that cost quite a bit coins or gems. The daily spin seems off now also. It feels like they odds aren’t equal anymore. Honestly the premium membership doesn’t seem like it’s worth it either. I guess I just miss the old days where I could read for hours on end and enjoy the comics. And the comics now, they all feel the same, it’s hard to find a good and unique comic that doesn’t follow the same story line with semi different ml and fl. It was good while it lasted but I guess it’s time to move on (ᗒᗣᗕ)՞
By JuJuBee975