DC Universe is a first-of-its kind digital subscription service that gives fans access to exclusive content and experiences not available anywhere else. WATCH exclusive original series, epic animated movies, and classic films and TV series. Stream our critically-acclaimed original programs like Titans, Young Justice: Outsiders, Doom Patrol, and Swamp Thing -- and look forward to our newest series, Harley Quinn and Stargirl. READ from a library of over 22,000 DC comics with our state-of-the-art digital comic reader. Follow your favorite heroes like Wonder Woman, Superman, Batman, and Aquaman through storylines like Flashpoint and Dark Knights: Metal. You can even download and read your favorites offline. SHOP from a selection of DC collectibles and merchandise only available to DC Universe members. Get your hands on our exclusive Justice League Animated action figures and exclusive DC apparel. CONNECT with other members and discuss your favorite DC comics, rivalries, theories, and memories in our moderated forums.EXPLORE the epic DC Encyclopedia and learn the bios and origin stories of all your favorite DC heroes, what their alliances have been, and their appearances in movies and TV shows through the years. Read the latest news about the DC Universe and learn about new shows and comics, in interviews, features, and other exclusive articles.WIN - members get chances to win sweepstakes and giveaways , including exclusive event access, movie tickets, stacks of comics, jaw-dropping collectibles, and MORE! Your monthly or annual subscription begins after your free trial. To avoid recurring charges for your subscription fee (which may include local tax depending on your location), you must cancel before the end of your free trial or current billing period. By downloading the app, you agree to the DC Universe Terms of Use and Privacy Policy (New). Ad Choices: policies.warnerbros.com/privacy/en-us/#adchoices Terms of Use: policies.warnerbros.com/terms/en-us Do Not Sell My Personal Information: privacycenter.wb.com/do-not-sell 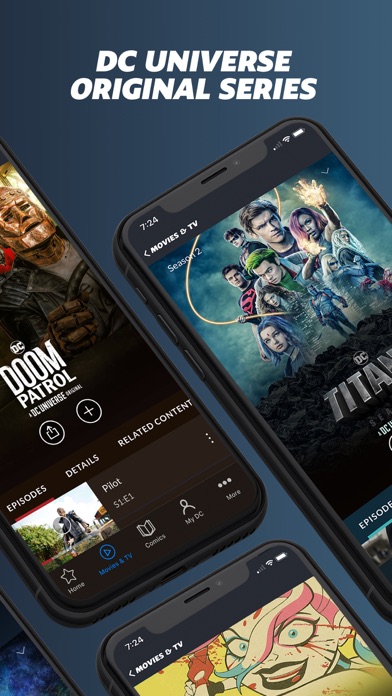 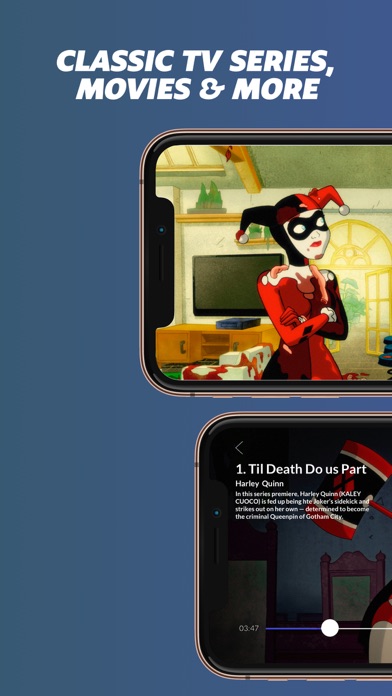 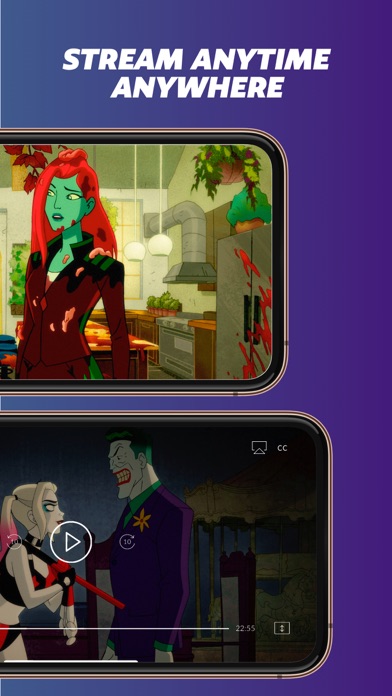 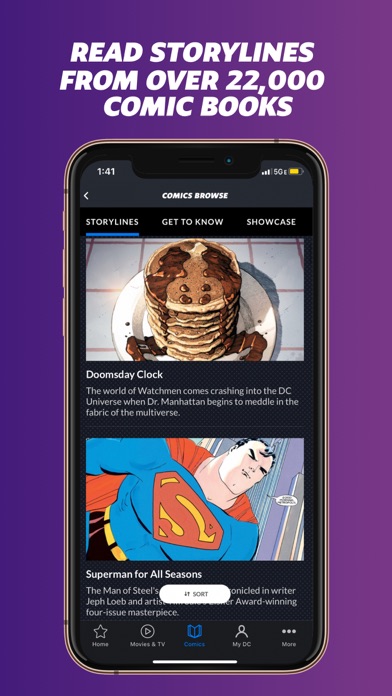 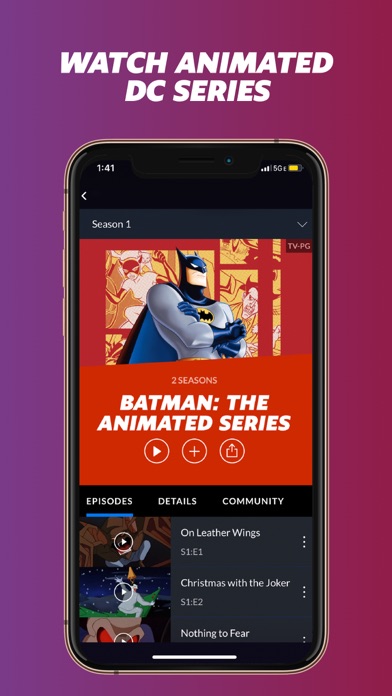 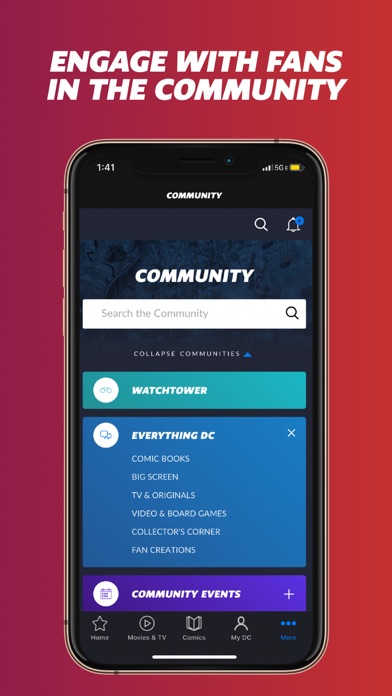 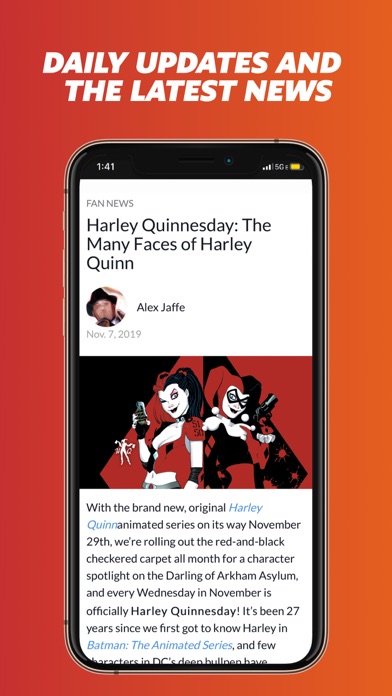 The app doesn’t work on my Amazon fire TV. Fix it or I leave
By Double Ock

Worth it every penny

Tons of comics and exclusives
By Ralocorvette

Keeps telling me to go premium

But I'm subscribed and it keeps prompting me to do so when I have paid already. Why I can't watch anything I don't know but that needs to be checked out
By Neocrim

Highly frustrated with the AppleTV app which prompts me to enter login credentials nearly every time I open the app, multiple times in a single day (AppleTV 4K model running the latest OS released yesterday)... this has been going on for weeks and weeks. I tried deleting and re-downloading the app, but that just seems to have made the problem occur with increased frequency. Arghhhh.
By bradexample

U figure that u are paying for the app u would have access to all the dc content and be the first to get new content, but the Animated movies don’t drop on this app and and anything on the CW is not there.
By Gags grrdf

While I love that I can make custom lists, I wish there was a way to subscribe to a title so that when new issues get added, they automatically get added to my reading list, and when I read issues from my "reading list" they automatically get removed unless I explicitly save them. Also, I wish browsing All Comics was less of a pain - they would be wise to take a look at Marvel unlimited's browse tab and copy it - I've never had an issue finding a title I want to read in their app.
By mbumb

When I first heard that DC is doing a streaming service I was so pumped like a million questions I had in my head such as are putting the classic animated shows like Batman the Animated Series or Superman the Animated Series? What movies are they adding? Are they bringing back Young Justice? And then when I heard that they are bringing EVERYTHING DC related to the streaming service my excitement went through the roof. At first they did had most of the tv shows, movies, etc that I’ve mentioned but they’re not adding anything so far. Also I feel like there is a lot missing for this service. Here’s everything that’s not here as of March 24, 2020: The Christopher Nolan Trilogy, Watchmen, About half of the DC Animated Universe movies, Man of Steel, Batman V Superman, Wonder Woman, Justice League, Aquaman, Shazam!, Suicide Squad, Joker, and the list go on. I am pretty sure that WB will cancel the DC Streaming service because nothing is being added at all! This is a huge disappointment because I expected so much more. I am not sure if it’s a licensing issue but they need to add everything that’s related to DC here and not HBO. Also any original content like Titans, Doom Patrol and others are really bad shows and I would not recommend watching them. The only reason why I’m still paying them $8/month is because that Harley Quinn show is actually pretty good. After I finish watching that show though I will cancel my subscription because I am NOT getting my money’s worth. Other streaming services are a much better value and the quality of the content is also a million times better. This is a huge disappointment and I hope it’s better but I highly doubt it. Also as a side note, why are they removing some movies and keeping others? DC can easily add everything but they’re not and I’m not understanding on why. Anyways that is my review. In short the DC Universe Streaming Service is not worth $8/month if you’re a DC fan, you will be disappointed.
By OGJohnnyboy

It’s ok but they don’t have as many dc animated movies as they claim to have like justice league war, teen titans vs justice league, either green lantern movies, Wonder Woman first movie, Superman Batman public enemies, Superman doomsday, like come on why is everything not on here
By Origin2814

Don’t waste your money on this membership! There isn’t enough movies or shows in the dc universe worth paying this much for. Not just that. Why is Birds of Prey already playing on Apple TV but not in DC Universe. It’s a waste of money.
By Why does a n1ckn@me matter

Where are the Live Action movies?!?!?!

I downloaded this app for the movies I search for all the batman movies, Superman movies and justice league but what do you know. They are not on here. They need to partner with Netflix and get they’re show’s from there or something. I dnt think this is worth it. I will download again once movies are added
By TankSWP